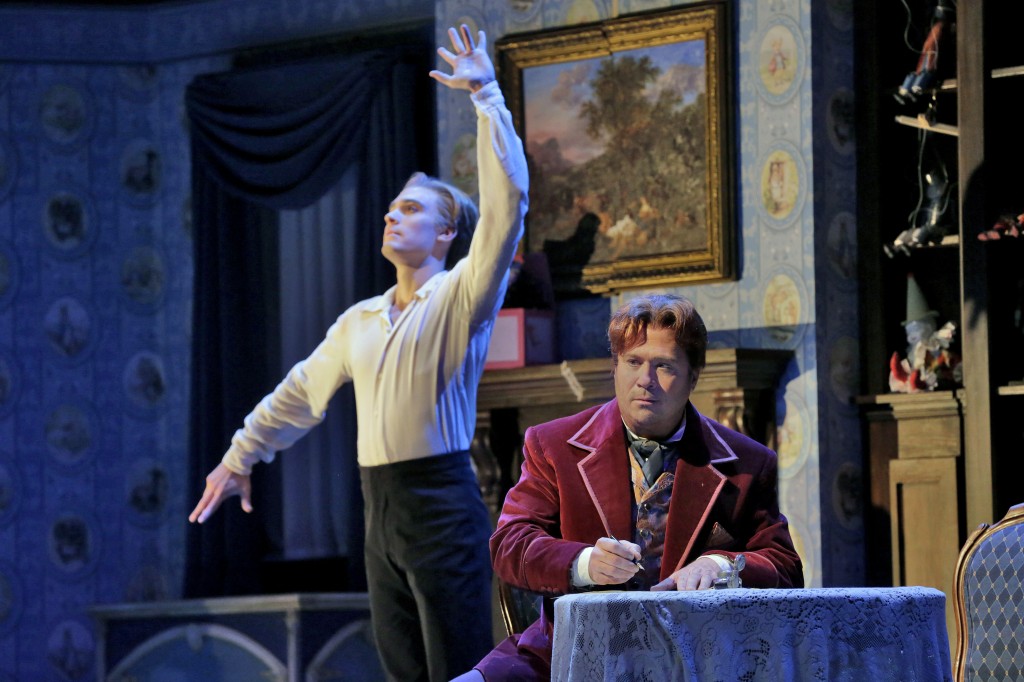 Oscar Wilde is so well known as the writer of deliciously witty social comedies such as The Importance of Being Earnest, Lady Windemere’s Fan and An Ideal Husband; and of the provocatively suggestive novel, The Picture of Dorian Gray; and of the sensationally decadent melodrama, Salome; that one often forgets that he also wrote some children’s stories that are among the loveliest fairytales in existence. My favorite as a young boy was “The Happy Prince,” although, despite a virtually divine apotheosis at the end, a sadder tale is difficult to imagine. As I watched Theodore Morrison’s wonderful new opera, Oscar, last evening here at the Santa Fe Opera, it seemed to me “The Happy Prince” might serve as a metaphor for discussing what I was seeing and hearing. With a strong original libretto written by John Cox, and featuring the incomparable countertenor David Daniels in the title role, this is a powerfully moving opera about a worthy man of genius who suffers much, is very nearly martyred and (in Cox’s vision at least) is ultimately admitted into the pantheon of immortal greatness.

“High above the city, on a tall column, stood the statue of the Happy Prince. He was gilded all over with thin leaves of fine gold, for eyes he had two bright sapphires, and a large red ruby glowed on his sword-hilt.” Thus begins Wilde’s heart-rending children’s story. From his elevated perch, the Prince sees not only the absurd vanity of mankind, but also its profound suffering. To divest himself of his wealth of gold and jewels and distribute it to the poor, he enlists the help of a small swallow who is migrating to Egypt for the winter. It is not long before the once magnificent and universally admired statue has become a shabby disgrace to the community and is torn down to be melted in a furnace. The faithful little bird, having too long delayed his departure to the warm south, freezes to death.

And thus the story ends: ” ‘What a strange thing!’ said the overseer of the workmen at the foundry. ‘This broken lead heart will not melt in the furnace. We must throw it away.’ So they threw it on a dust-heap where the dead Swallow was also lying.

” ‘Bring me the two most precious things in the city,’ said God to one of His Angels; and the Angel brought Him the leaden heart and the dead bird. ‘You have rightly chosen,’ said God, ‘for in my garden of Paradise this little bird shall sing for evermore, and in my city of gold the Happy Prince shall praise me.’ ”

Dealing as it does with themes of intolerance and persecution, Oscar is, to be sure, a story for our time — which is one reason both David Daniels and Theodore Morrison wanted to do this opera. But they wanted to show Wilde as a “hero more than as a victim.” They were also more interested in the man of compassion (the Prince) than Wilde the witty aesthete with a green carnation. The way the libretto is constructed, I think Morrison and Cox have achieved their goal. Wilde, as most people know, acted against the wise advice of many close friends and was lured into a fatal lawsuit by his lover Lord Alfred Douglas, the son of the Marquess of Queensberry, he of fisticuffs fame. Lord Alfred, affectionately known as “Bosie” by Wilde, encouraged Wilde to take offense at being labeled a “sodomite” (and misspelled “somdomite”) on a visiting card left by the Marquess at Wilde’s London club. Wilde lost his lawsuit, was convicted of “gross indecency” and sentenced to two years of hard labor in prison. It was there, in his solitary confinement and for a long time denied anything to read, that he wrote the well-known poem “The Ballad of Reading Gaol” and the tragic letter to Bosie, De Profundis. He also witnessed the execution by hanging of a trooper from the Royal Horse Guards, an event which disturbed him greatly and is depicted in Morrison’s opera. The Morrison/Cox Wilde is one who grows and grows in human compassion.

It is impossible to know just what most opera-goers expect when they come to Santa Fe to see this important new work. They would perhaps like it to be full of witty banter and comical situations. Would they like to see an impersonation of Wilde? (Vincent Price did a very famous tour with the character.) Perhaps they expect a more traditionally streamlined courtroom melodrama. What they get is a very serious, almost tragic work with flashes of surreal comedy. The action is set in the prison, and flashbacks occur in which we see Wilde being refused admittance at many London hotels, and ultimately taking refuge in the nursery of his good friend, novelist Ada Leverson (superbly sung and acted by soprano Heidi Stober). There he is visited by his friend Frank Harris (the fabulous tenor William Burden, in absolutely top form). Harris was a life-assertive character, an independent thinker and a champion of Wilde’s. In the the opera, he has arranged for a boat to whisk Wilde off to Paris in a swift aquatic sprint down the Thames and out to sea — far away from a trial that is certain to end in a prison sentence. But Wilde foolishly — or perhaps bravely — remains behind.

Daniels, not surprisingly, is utterly perfect for the role. It is his role now and for as long as he wants it. He owns it, as they say, but he eschews any effort to impersonate Wilde. He merely attempts to be a human being. 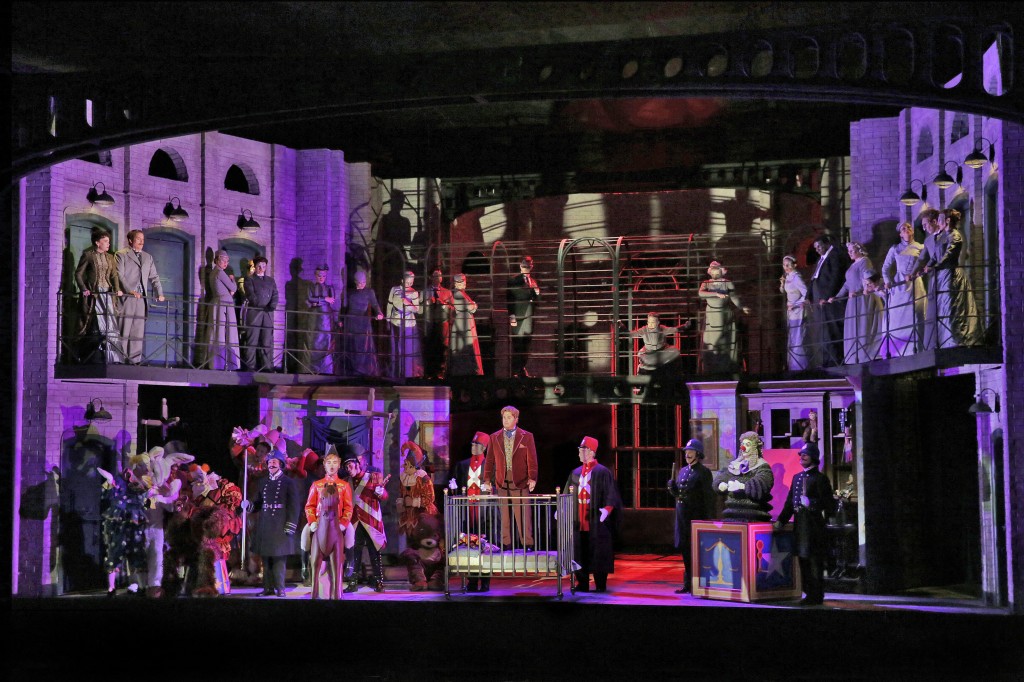 The Trial. Photo by Ken Howard.

In a nightmarish fantasy sequence, the nursery is elaborately transformed into a courtroom full of clowns and toys, with Oscar Wilde being the only fully human character. The judge is a grotesque jack-in-the-box puppet (the rather wonderful bass Kevin Burdette, who also creepily incarnates the despicable Colonel Isaacson, one of Wilde’s Reading Gaol tormentors). After the interval, the opera darkens considerably: even Bosie, a dancing part throughout (in the mode of Tadzio, the beauteous beloved boy in Benjamin Britten’s Death in Venice) becomes a deathly figure with dusty ebony robes and a grinning skull. Reed Luplau is given lots to do, appearing in various guises quite different from the epicene male Wilde so adores. This is a role Luplau has created, along with choreographer, Seán Curran, and he is excellent in it.

This opera is a dark journey through hell, and, as with Danté’s trip through The Divine Comedy — from Inferno through Purgatory to Paradise — Wilde’s journey has its own Virgil for a guide, the spirit of Walt Whitman. Perhaps it is more accurate to call Whitman “our” guide, for he serves as a narrator of sorts. At the end he seems to lead Wilde into the heavenly regions of the immortal poets. For a poet as great as Whitman, only the greatest singer will do — and we are given one of the great character baritones of our time, Dwayne Croft.

“There is no truth comparable to sorrow.” There is no room at the inn. At one point Wilde cries out “My God, My God,” as if he is singing the lines of Bach’s Jesus in The Saint Matthew Passion. In fact, the composer has given Daniels musical lines that seem to evoke Daniel’s career as a Baroque specialist. In general the vocal lines are perfectly shaped to the text, and for a first opera (!), Oscar is a remarkable achievement. Tunes and easily identifiable motives abound, and the piece is richly scored. Many passages include stunning pronouncements for the brass. At another moment, Bosie dances to a haunting cello solo. It’s a score worthy of repeated hearings.

Conductor Evan Rogister was so involved with getting good results from his players, that he was almost a distraction to watch. The stage — the prison and the various scenic elements that appear magically within it — is impressive to look at thanks to designer David Korins and and lighting designer Rick Fisher. Stage director Kevin Newbury uses every trick he can think of, and it is impossible to doubt the degree of his commitment and enthusiasm. Susanne Sheston is responsible for the top-flight choral work.

This is one of Santa Fe’s finest original presentations in several decades. 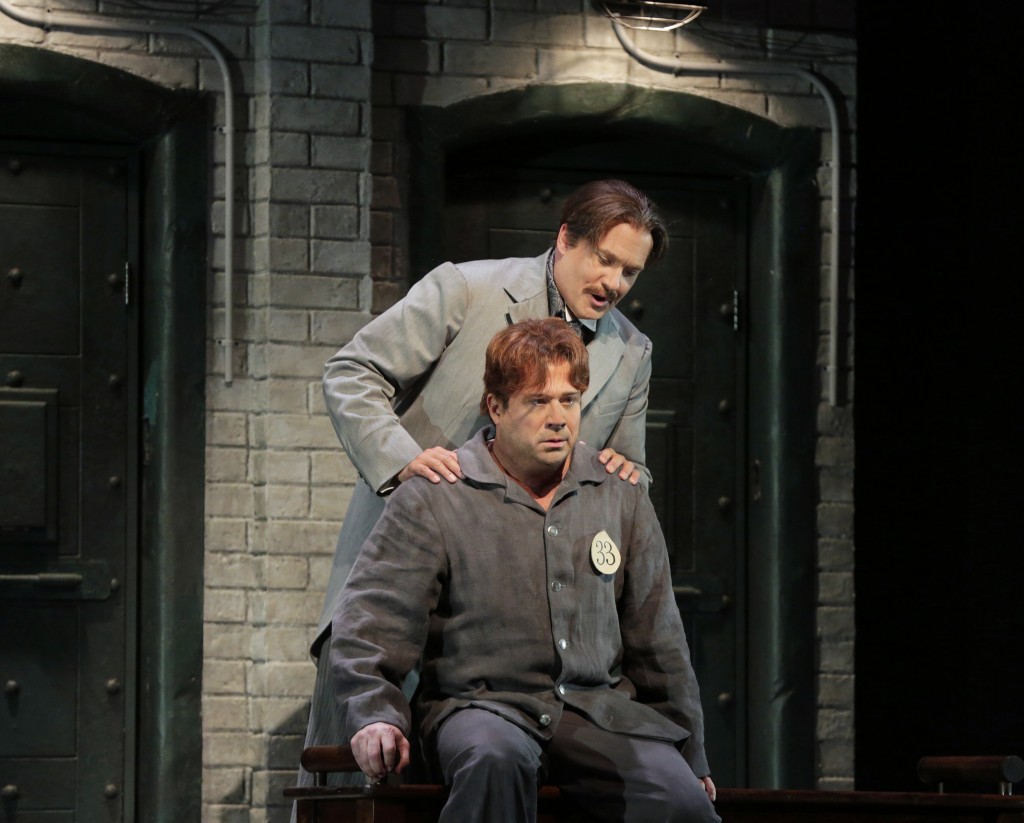