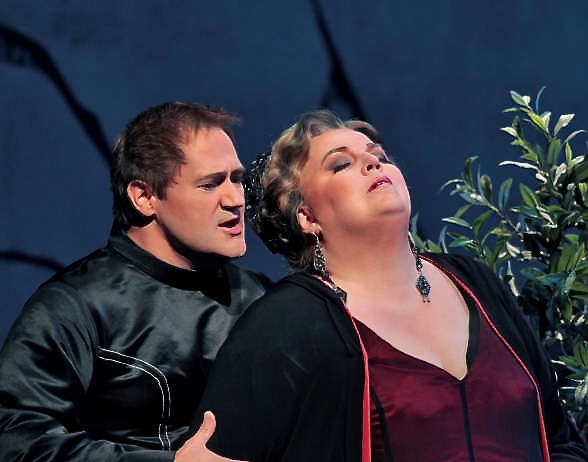 Two operatic “superstars” (a wretchedly inflated overused term which simply means “stars” these days) were Santa Fe Opera’s big draw this 2009 season: sopranos Natalie Dessay and Christine Brewer. From the looks of things, people flocked to hear Dessay in La Traviata and flocked away from hearing Brewer in Alceste.

What’s to blame? Is it Gluck? Is it Brewer? Is it the confusing and sometimes ridiculous Louis Desire production with its big cracked egg thingy center stage? Is it stage director Francisco Negrin’s simple-minded symbolism? Is it Ana Yepes’ often jagged automaton choreography? Is it the recession?

Officials assured me the house was three-quarters sold out, but when I arrived at the parking lots 45 minutes before performance time Friday night (August 14), the lower lots were closed and empty, and I was able to park closer to the opera house entrance than ever before in over 13 years of visiting Santa Fe.

The opera “rarities” – such as the admittedly only relatively rare Alceste –are part of Santa Fe Opera’s big attraction, at least for this opera lover. One would hate to see future seasons dumbed down. It’s happening elsewhere, after all. Some companies are cutting back costs, reducing the number of performances, cutting out an opera or two, mounting nothing but warhorses or closing down altogether.

And Alceste  is a truly gorgeous work. Yes, it’s lugubrious for long stretches, and sometimes one wonders if Gluck couldn’t have “reformed” opera with just a tad more zip and fewer dances, but it’s a masterpiece — one that doesn’t need to be mucked around with either. It actually has a happy ending – but thanks to Negrin, everybody dies in the end, all dragged offstage in a black fabric marked “La Mort” so those who read French can explain things to their less linguistically inclined friends. Yes – we all die in the end. Thanks for the brilliant insight, Mr. Negrin.

As for the opera itself — in the terms of a male dominated universe, Queen Alceste is a truly “good” woman who, following a capricious Apollonian decision that her husband, King Admete of Thessaly, must die unless someone else dies in his place, is totally prepared to expire to spare her spouse’s life. Ah, true love and devotion! There is a small problem, however; Admete will not be truly happy living without Alceste and Alceste will not be happy dead. Oddly enough, the underworld always appears rather lively in staged versions of such mythological stories. It was an easy leap to parody for Offenbach.

Brewer has a big voice, but the superb, carefully scaled band led masterfully by Kenneth Montgomery, offered no loud orchestral curtain to cover her vocal flaws. She sometimes sounded shrill or hoarse – and for this listener at least, the singing almost always lacked a true depth of emotional commitment. Brewer seemed to be “in” the role one moment and out of it the next – much having to do no doubt with an injury and her overweight (a condition she is trying to deal with, according to what I was told). For me, the interpretation was far from an epiphany.

Tenor Paul Groves was excellent as Admete, maintaining long vocal lines with heroic strength. He commands the stage both as a king, a lover and as a suffering victim. The voice itself, however, seems to being growing gruffer these day, and it’s alarming to speculate where that may lead.

Out on parole from his labors, Hercules wanders into this story and harrows hell so to speak in the final act. He finds a fine incarnation here in bass Wayne Tiggs. Praise must be equally distributed to the chorus and to the apprentices — baritone Nicholas Pallesen (Herald and High Priest); soprano Jennifer Forni (Coryphee); tenor Aaron Blake (Evandre); bass Tom Corbeil (Oracle and The Infernal God) and baritone Matthew Morris (Apollo looking a little like a Star Wars robot). Lots of talent here! And was that Tom Corbeil doing some dance gymnatics on top of everything else. Good grief!

Yes – and as for those dances. As a major fan of composer Jean-Phillipe Rameau (whose operas, among many others, Gluck was reforming), I own many DVDs in which very odd approaches to dance are taken – despite the reigning presence of Mr. Authenticity himself, Sir Wiiliam Christie (or Chritophe Rousset) in the pit. Anything goes. Here the dancing was filled with odd jerking motions, but I also noticed some orange and gold costumes redolent of Grecian vases, and I suppose the angular poses were inspired by ancient urns. This reference is far less obscure than many things to be seen in Rameau DVDs.