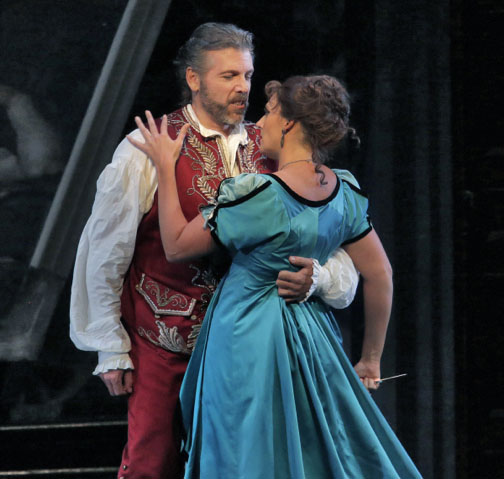 Thomas Hampson as Scarpia and Amanda Echalaz as Tosca. Photo by Ken Howard.

Now playing in summer festival repertory.
Review by David Gregson of August 8 performance  — an plus update for the cast change in the August 11 performance.

As had been planned from the beginning of the season, famous American baritone Thomas Hampson took over the role of Scarpia Saturday night in Santa Fe Opera’s production of “Tosca.” Dramatically, Hampson was a great improvement over basso Raymond Aceto who had been performing the role since the production was first presented on June 29. Vocally — well, it’s a toss up.

In the Act One “Te Deum,” Hampson was slightly underpowered for the scene’s vocal demands, and elsewhere he did not produce the ideally black vocal quality that makes for the most exciting sort of Scarpia. I confess to having predicted this in my own mind. Although I regard Hampson as a great artist, I have never thought this sort of role would be good for him. Am I unfair to feel this way? Perhaps the sound of Tito Gobbi is lodged forever in mind. His was the first Scarpia I ever heard, way back in high school.

What follows is my review of “Tosca” sans Hampson. Looking it over today, I can see I failed to mention the really excellent performance of the fugitive who opens the entire opera and gives impetus to the whole story. This was Cesare Angelotti as sung by impressive sounding Santa Fe apprentice baritone Zachary Nelson, for whom I predict a great career. I also enjoyed hammy bass-baritone Dale Travis who extracted virtually every comic possibility in the role of the Sacristin, even singing several times while scarfing down bits of food stolen from Cavardossi’s luncheon basket. I also thought tenor Dennis Peterson was excellent as Scarpia’s evil minion, Spoletta.

A second visit to this production also gave me a different impression of soprano Amanda Echalaz: she seemed much more The Diva in Act One than on first hearing. And as for the quasi-expressionist sets that gave us tilted views of almost everything, I actually enjoyed seeing the brilliant lighting of the colorful inner skin of the “cupcake-presser” church dome in Act One. (Lighting was by Duane Schuler.) Nothing, however, can convince me that Cavaradossi would be painting his Madonna on the church floor. I noticed Hampson took care not to step on her freshly painted face. 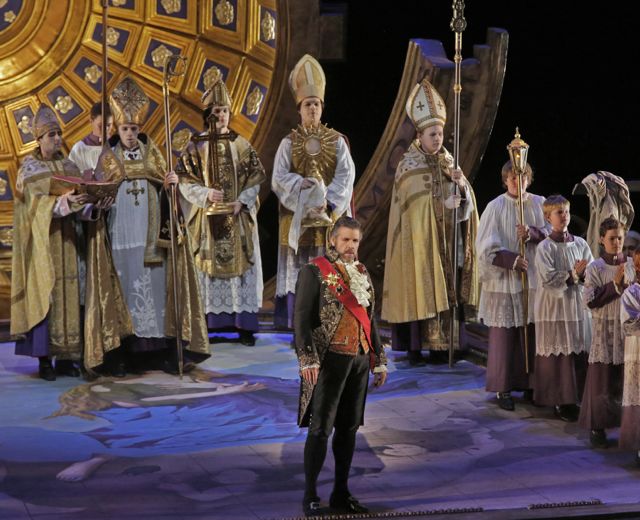 Thomas Hampson as Scarpia -- with lighting on the inside of the "cupcake dome". The "Te Deum" scene. Photo by Ken Howard. 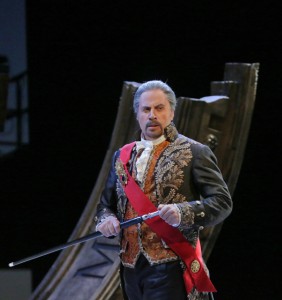 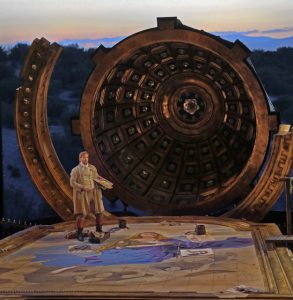 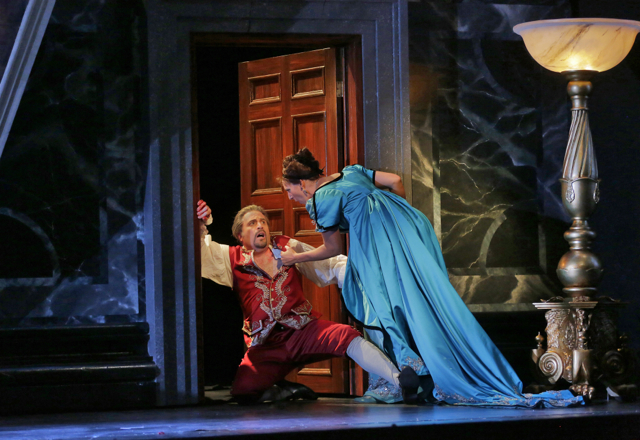