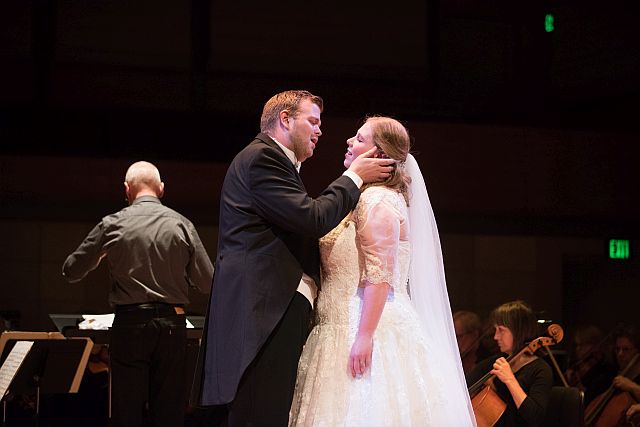 Kyle van Schoonhoven as Lohengrin and Sarah Cambidge as Elsa in the wedding scene from the Wagner opera. Behind them, Eric Weimer conducts the San Francisco Opera Orchestra. (Photo by Kristen Loken)

Even in the unique history of 58 resplendent years of helping to launch hundreds of singers on their professional careers — including Joyce DiDonato, Thomas Hampson, Dolora Zajick, Patricia Racette, the late Brian Asawa — the opening concert of San Francisco’s 2016 Merola Opera Program will remain writ large.

She came up with a simple, perfect multi-purpose setting for the concert’s second half, a bed serving the wedding scene of Lohengrin (Sarah Cambidge‘s big-voiced Elsa demanding the secret from Kyle van Schoonhoven‘s beautifully sung Swan Knight, later attacked by Telramund and just two of the four conspirators Wagner had called for); then the death of the Mother Superior in Dialogues of the Carmelites (with a powerful, affecting performance by Tara Curtis]; and finally providing the resting place for hilarious   Josh Lovell‘s bedding attempts as Comte d’Ory in drag.

The concert consisted of six substantial opera scenes, beginning with Act I of Handel’s Serse, and a performance that set the tone for the whole event, Aryeh Nussbaum Cohen‘s stunning appearance as the king, singing “Ombra mai fu.” Known as a countertenor, Cohen (from Brooklyn, but returning to San Francisco after his acclaimed appearance with the American Bach Soloists here) is in fact a male alto, with a warm, lush voice of affecting beauty, delivered with flawless musicality, intelligence, and natural stage presence. Still a 20-something, Cohen is sure to rule the Handel repertory (and much else) for decades to come.

Cohen also served as a selfless ensemble member of the the Serse excerpt with Taylor Raven (Arsamene), Nicholas Boragno (Elviro), Jana McIntyre (Romilda), and Mary Evelyn Hangley (Atalanta). Hangley and McIntyre went on to sing, respectively, an Arabella both elegant and down-to-earth, and an explosive Zdenka.

Lovell, Boragno, and Curtis had a romp as Tom Rakewell, Nick Shadow, and Baba the Turk in Act II of Stravinsky’s The Rake’s Progress. (Boragno also sang Waldner in the Arabella scene.)

Eric Weimer conducted members of the San Francisco Opera Orchestra and other musicians (as many as could be squeezed onto the upstage), accompanying the singers well, with the exception of a few balance problems, but on the whole serving the purpose of the event: showcasing the singers. At the second performance, a Saturday matinee, there were still spots in need of more rehearsal.

Christopher Verdosci designed what was perhaps the best-costumed Schwabacher event. Max Mesenger handled lighting well, but playing with darkening and brightening the stage in the middle of scenes, diverting attention from the music; light in opera should be heard, not seen.

But back to the point of it all: the concert for introducing new Merolini (there are a dozen others not yet heard) was a rousing success and highlighted young talent well beyond promise. Consider the rest of the summer programs and take part in exploration and exhilaration. 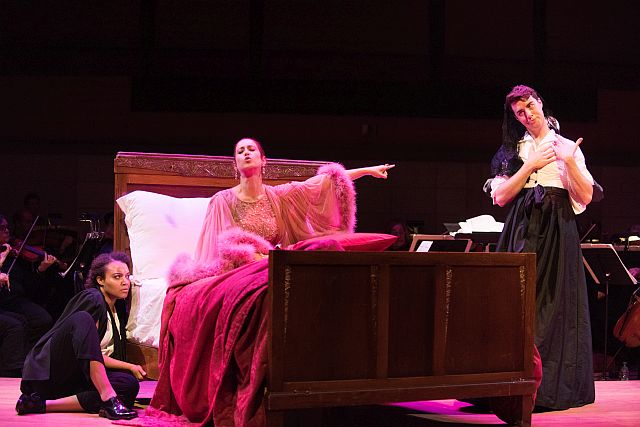 Tenor Josh Lovell (right) as Le Comte Ory in the Rossini opera scene at the Merola Schwabacher concert, with soprano Jana McIntyre as La Comtesse Adele on the bed, and mezzo Taylor Raven as Isolier. (Photo by Kristen Loken)