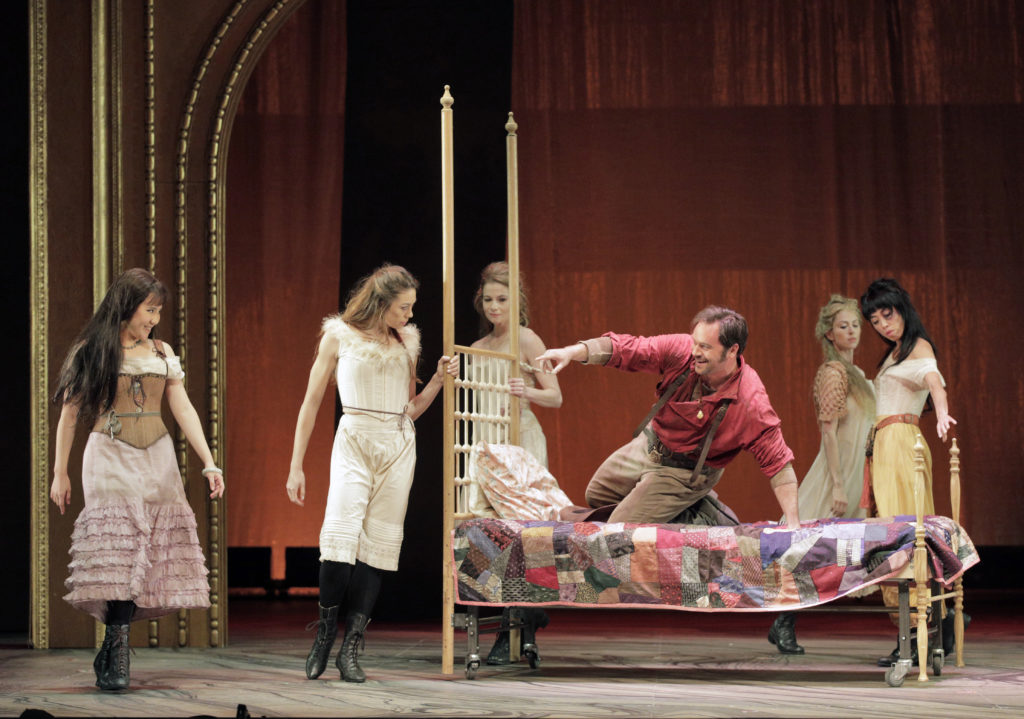 The more you expect of John Adams’ new opera, chances are the more disappointed you will be. In my case, expectations and disappointment were substantial.

The world premiere of Girls of the Golden West tonight  in San Francisco Opera’s War Memorial in no way matches the inexorable forward momentum of Adams’ Nixon in China, the grandeur of his Harmonielehre, the gripping drama  of Doctor Atomic‘s “Batter My Heart.”

Directed by Peter Sellars, who is also responsible for the project and the libretto, GirlS (plural against Puccini’s Girl of the Golden West) has an unrelivedly  static 80-minute first act and a more interesting, but overlong second act, about 90 minutes long.

Musically, the opera is mostly an apotheosis of nervous, pulsating syncopation, dominating especially the first act. Dramatically, it is a string of individual scenes held together gingerly by the general theme of miserable life in the mining camps of the Sierra during the peak of the California Gold Rush in the early 1850s. Out of wealth of source material comes a picture of a world consisting almost entirely of criminals and victims.

The value of this production comes from an exceptional cast and Ian  Robertson’s S.F. Opera Chorus (men only, never mind the opera’s title), who all sing their heart out, needlessly amplified.

Small, but still visible body mikes and the audible amplification might have been news to some, but it’s an unfortunate standard for all Adams performances, required by the composer. 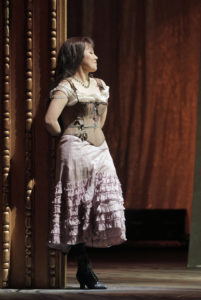 Among the principals: Julia Bullock is Dame Shirley, she is on stage most of the time, performing  arias, recitatives, duets. Hye Jung Lee sings Ah Sing, the Chinese prostitute who makes a life for herself. J’Nai Bridges is Josefa Segovia, the Mexican barmaid, whose self-defense leads to her death. Davóne Tines is the cowboy Ned Peters, a former slave, scoring with a big aria.

Paul Appleby is an outstanding tenor, triumphing vocally and dramatically as Joe Cannon, in one incomprehensible self-destructive crisis after another, from rejecting Ah Sing’s love to attacking a roomful of gamblers to the attempted rape of Josefa – and there must have been some other scenes with him invoking the sinister anti-hero of The Drunkard… minus the handlebar mustache. 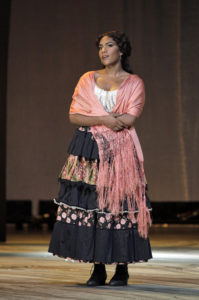 Sellars, whose pre-production introductory lectures showed in-depth knowledge of the subject and great enthusiasm for it, came up with a fragmented, repetitive,  often puzzling libretto, aimed at making points rather than providing insight. Ibsen’s Per Gynt comes to mind, peeling an onion: “It’s nothing but layers, smaller and smaller.” For the opera, what’s left is more than the emptiness of the onion’s core, but few will experience completion or catharsis.

The plot is all over the place, careening from story to story, with uneasy, non-illuminating pauses. What is fascinating source material in Dame Shirley’s letters from the gold mining camps becomes a jumble in the opera. Sellars’ libretto trying to cover too much ground, with a laundry list of the rape of the environment, the genocide of native Americans, discrimination and violence  against Mexicans, South Americans, and Asians, the abuse of prostitutes, the (fortunately unseen) lynching of a woman defending herself from rape… and more.

Any one of the opera’s 11 busy scenes might have become a worthy subject alone or in the context of history, but the 3 1/2-hour marathon, from the long opening recitative and confusing interaction between heroine, husband, escaped slave, and a recalcitrant donkey, all the way to the epilogue is best characterized by the description of the final scene:

“On her last day at Rich Bar, Dame Shirley surveys the detritus of sardine cans, jars, and broken bottles that line the riverbanks, all dusted with a light covering of snow.

“She lifts her eyes to behold the purple beauty and majesty of the old mountains and ‘the wonderful and never-enough-to-be-talked-about sky of California’ which ‘drops down upon the whole in fathomless splendor’.”  Curtain.

The quote from the Dame Shirley letters is a good example of her writing, but on the stage, the detritus of sardine cans doesn’t seem to provide a viable bridge between history and the opera in the here-and-now. 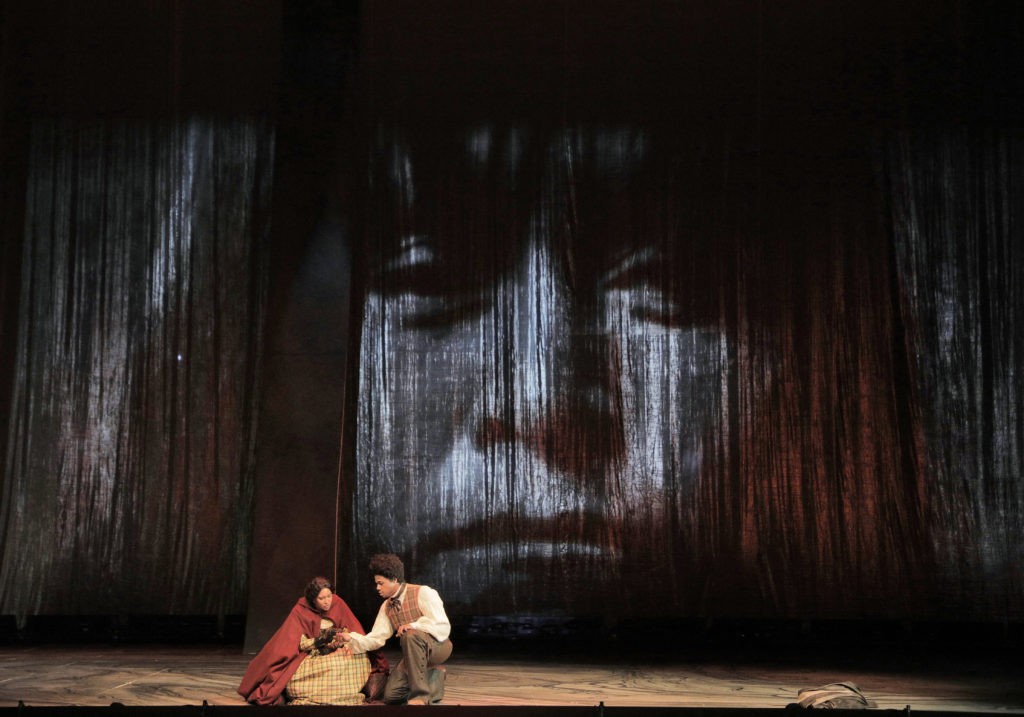 In the long list of Sellars’ directorial/production missteps is the use of Kuroko (black-clad, “invisible” stagehands of the Japanese theater) in moving the surprisingly meager sets… but in their street clothes, clashing with Rita Ryack’s 19th century costumes for the cast, and diverting attention constantly. What’s the point?

The director allowed the opera’s embarrasing excuse for “choreography” (quotation marks are necessary), with four bar girls displayed prominently on center stage, wiggling with deliberate awkwardness. Credited as choreographer, John Heginbotham even manages to ruin Lola Montez’s Spider Dance by the magnificent former San Francisco Ballet principal Lorena Feijóo. As seen atop of a high platform, Feijóo dances with her feet hidden by the edge of the platform from the view of the audience in the orchestra section. 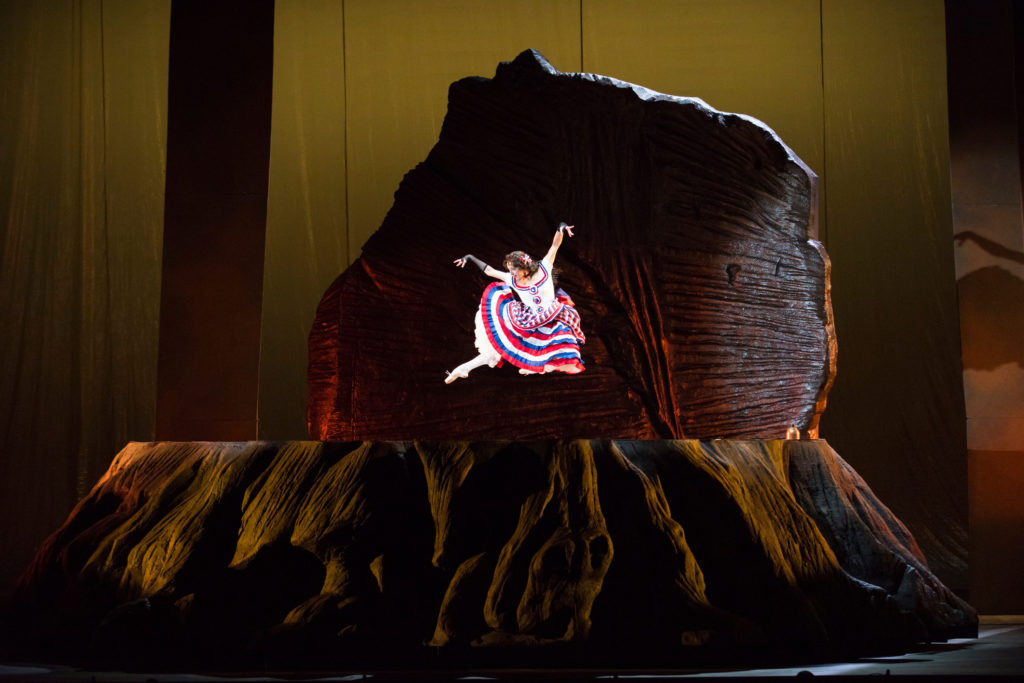 It is the music that’s the surprising, almost shocking disappointment. Meandering, uninteresting vocal lines are heard against a monotonous orchestral background that takes the listener back to the early days of Minimalism — not even Adams’, but Philip Glass’ at his worst. It’s only at the very end of the opera, during a lengthy death-and-lamentation scene that musical beauty appears, but it’s too late: some of the audience have left, others sit numb, and a small group of fans applauds enthusiastically. 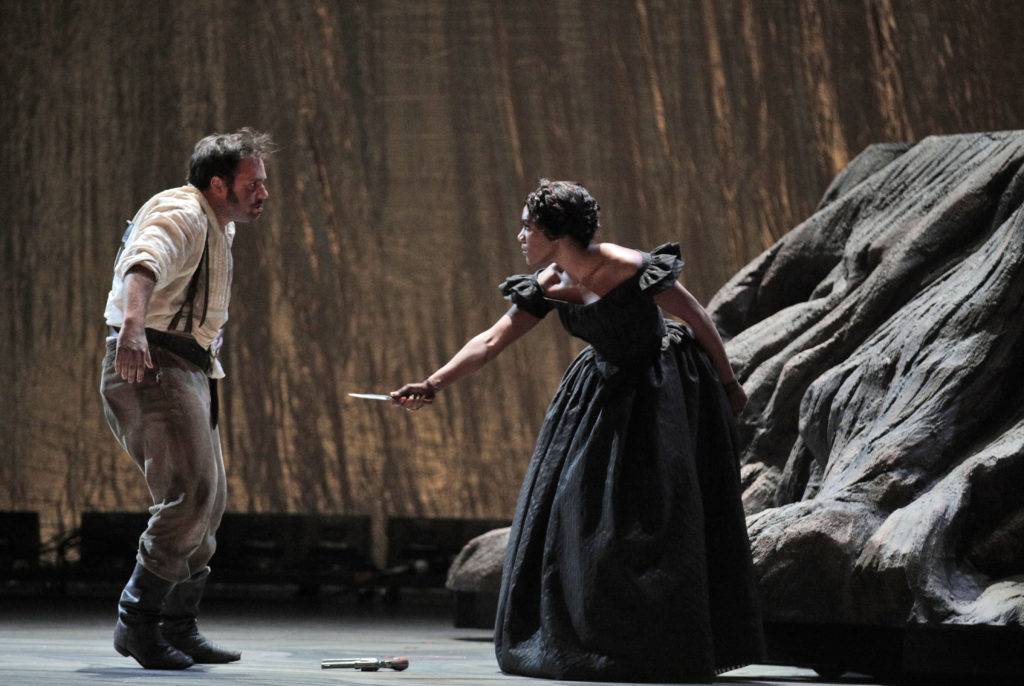