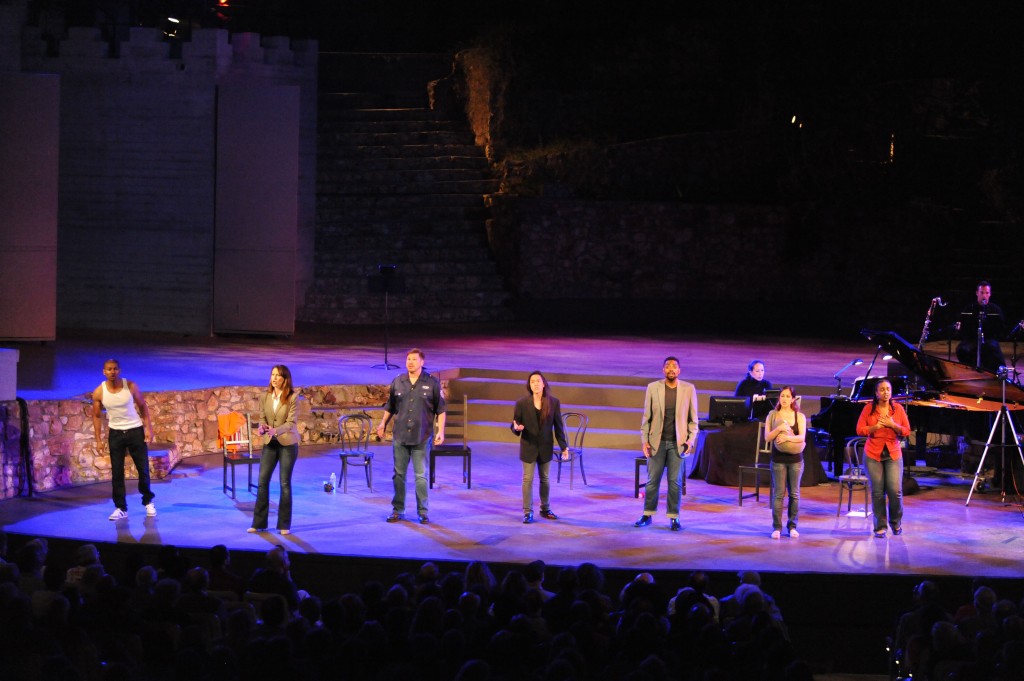 John Adams’ I Was Looking at the Ceiling and Then I Saw the Sky
Long Beach Opera in a one-night-only semi-staged “concert” performance. Saturday, August  23, 2014
Ford Amphitheatre
2580 Cahuenga Blvd. East
Hollywood, 90068
Sung in English

“I was looking at the ceiling and then I saw the sky” is a poetic piece of personal reportage from the Los Angeles Times. “There I was in Northridge back in 1994, when suddenly there was this huge earthquake and my house fell down.”

But the statement can also function as a powerful metaphor for a personal epiphany: ”There I was, living my life in my usual and perhaps complacent way, when like a stroke of lightning, a new way of understanding things opened up on me with the power of a revelation.” 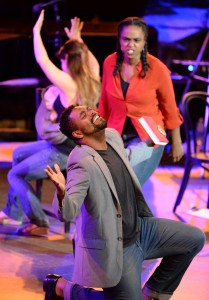 In other words, the title of John Adams’ “song play,” I Was Looking at the Ceiling and Then I Saw the Sky, with its libretto by poet/social activist June Jordan, tells us up front that all the characters are going to undergo a significant change by the time the piece is over. These characters do not come from the upper echelons of American society. They are seven young Los Angelinos from various representative socio-economic and ethnic backgrounds: Dewain (Cedric Berry), a black gang leader facing a three-strikes prison penalty for stealing two cans of beer (an act which coincidentally evokes images of Michael Brown with his allegedly stolen cigars during the current Ferguson, Missouri upheaval); David (Bernard Holcomb), a likable black Baptist preacher with a too-keen eye for the ladies; Leila (Lindsay Patterson), a family planning counsellor who rejects David’s advances and barely survives the quake (or actually dies depending on whom you talk to); and Consuelo, Leila’s El Salvadorian client (Holly Sedillos), the mother of two children, one of them an infant sired by her lover, Dewain. Consuelo lives in constant fear of immigration officials. 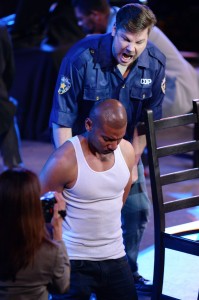 And there is Mike (Zeffin Quin Hollis), a policeman who represses his homosexuality in order to be the man he thinks society expects; Tiffany (Zipporah Peddle), a TV crime-as-entertainment reporter ultimately frustrated in her pursuit of Mike: and Rick (Andrew Nguyen), a Vietnamese-American lawyer, unseasoned in his profession and green in his amorous adventures.

If we are to believe what the composer and librettist tell us, this theater piece is a “polyphonic love story in the style of a Shakespearean comedy,” that it’s somehow like the Kurt Weill/Bertolt Brecht masterpiece, The Three Penny Opera, and that it is an “earthquake/romance” with love as its central subject.

Except for the fact that ‘Ceiling/Sky” dwells on troubling contemporary social concerns, I cannot see any resemblance to the openly didactic, bitterly satirical, acerbic and wicked Weill/Brecht Threepenny Opera. Using a German cabaret style mixed with modernist influences of the time, Weill achieves a much more unified work. Adams’ piece is only unified by a sort of motivic drive, the pulse of his early music, the so-called Minimalist style he and Philip Glass helped establish in modern opera. Adams employs pop, rock, jazz, gospel, groovy urban blues, hard rock blues, Broadway, Motown, “world music” and some genres most opera commentators like myself know little or nothing about. 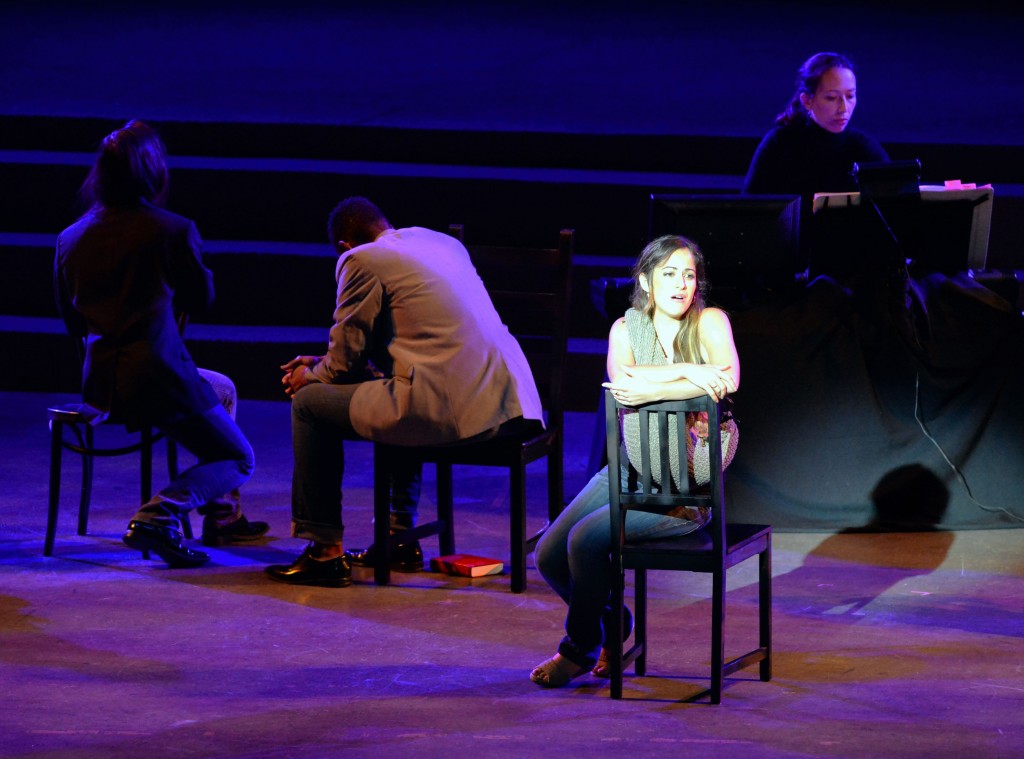 In any case, I had always thought I knew this piece — but it turns out I don’t. I was introduced to it by a CD and record collector, a passionate lover of Broadway musicals and a big fan of singer Audra McDonald. What I heard was a Nonesuch CD containing bits of the score conducted by John Adams himself. This performance was very recently and inaccurately described to me as “definitive,” but inasmuch as there are only 15 tracks on this single disc (as compared to the 24 tracks on the two-disc set released on Naxos at some time later than the Nonesuch disc), the original Nonesuch CD performance is not definitive at all. It’s about 50% of the show. So, as I sat in Ford Amphitheatre listening to “Ceiling/Sky,” half of it was totally new to me — and I wasn’t at all sure I liked many of the unfamiliar numbers at all, especially a long scene when Tiffany confronts Mike about his possibly being gay.

To make my life experience with “Ceiling/Sky” even odder, years ago I first heard the CD exactly one day before I interviewed John Adams for San Diego Magazine. We discussed the recording and I told him I liked it — which seemed to surprise him. He was delighted, however, saying most critics did not like it very much; but I cannot recall if he told me I only knew the half of the piece!

Despite a really marvelous semi-staged “concert” performance with outstanding soloists from the Long Beach Opera, not to mention the expert conducting of Andreas Mitisek and the playing of his band, I found the whole experience began to drag at the halfway point, and because the story is somewhat opaque (in defiance of some helpful spoken announcements LBO added to clarify it). An amplified ensemble (guitar, bass, clarinet, sax, percussion and keyboards) was excellent, if a little too loud depending on where one sat in the beautiful outdoor amphitheater, and the diction of the soloists was good enough that I, at least, needed no supertitles. 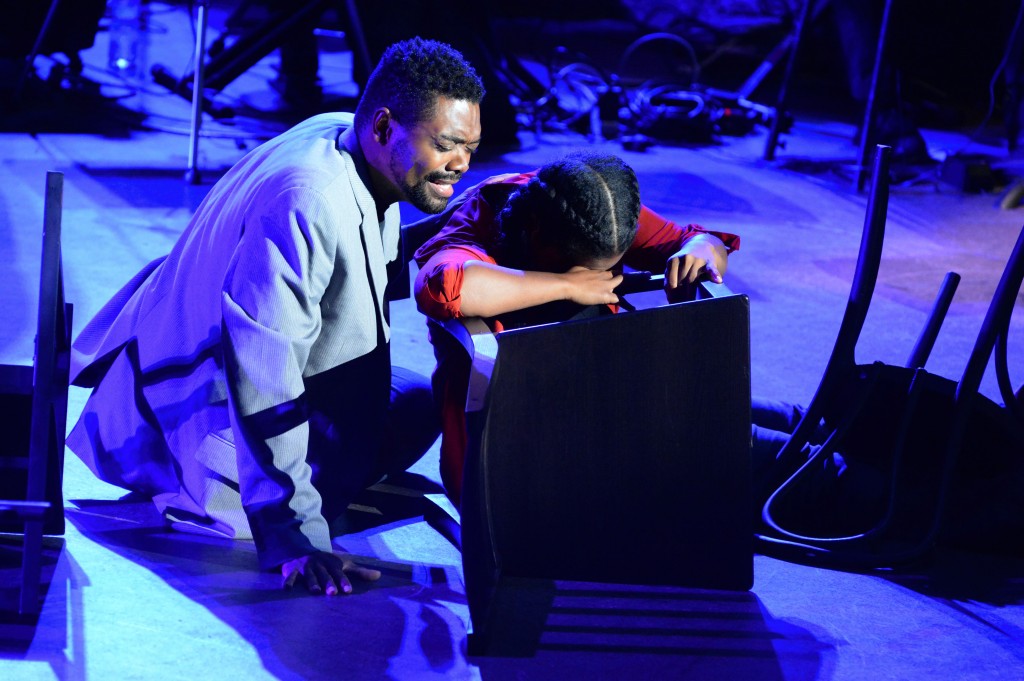 And yet, the actions of the characters and the exact natures of their epiphanies all needed to be puzzled out. One would have liked to have seen Mike come to terms with his sexuality, but that doesn’t happen. Consuelo’s decision to return to El Salvador seems less an epiphany than an act of desperation. Yes, she has Dewain’s babe in arms and she fears for an older son arrested by the INS. Yes, she and Dewain are the principal love interest of the piece and have the most numbers; but while while Holly Sedillos was excellent, it was 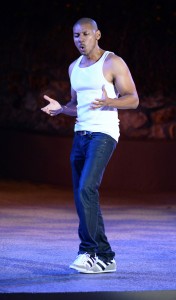 Cedric Berry’s performances that had the distinctive appeal one is most likely to remember. His character, however, unromantically decides to stay in America and go to law school rather than go into exile with Consuelo. A messy conclusion (if that’s what it is) for these two.

Tiffany, wonderfully realized by Zipporah Peddle, is not the type of character that inspires affection. She’s too shallow to have anything to offer us emotionally. Her running off with Rick, excellently sung and acted by Andrew Nguyen, did not interest or touch me — and Rick is too much of a lawyering cypher to care about.

Lindsay Patterson and Bernard Holcomb were outstanding as David and Leila. The latter gets crushed during the earthquake. This leads David into the memorable section, “Crushed by the Rock I was Standing On,” with David’s faith undermined.

Some highlights: “Song about the Sweet Majority Population of the World” in which David, Rick, Dewain, and Mike turned the minimalist stage setting, a bunch of chairs, into incredible eroticized fetishes — a bit of directorial genius on the part of Mitisek as stage director. “Este Pais” (“This Country”) in which Consuelo and Dewain realize that this land is not made for you and me. “Song about the Bad Boys and the News” in which Consuelo, Tiffany, and Leila use some delightfully explicit sexual metaphors to great effect. Dewain’s “Solo in Sunlight” and “Consuelo’s Dream.” And the recycled opening plus the ensemble finale tutti, are also excellent and were wonderfully performed. 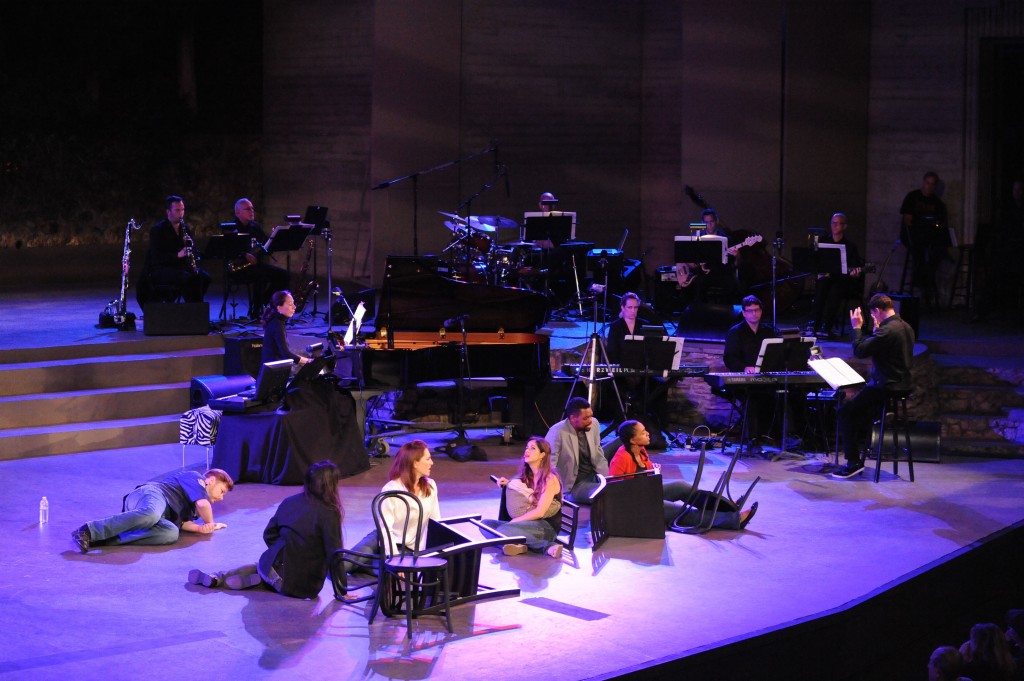 Some cast members and the band conducted by Andreas Mitisek. Photo by Keith Ian Polakoff.

Incidental news: An actual earthquake occurred in Northern California mere hours after this performance.  Had this happened in Los Angeles, the LBO might be charged with “sympathetic magic.” The notion that an earthquake might happen in Hollywood during the performance was amusingly entertained by some in attendance, myself included. In any case, this was the work’s first performance here — and the date will stick in my mind.