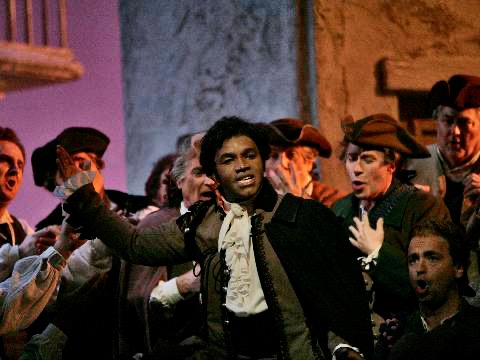 Rossini’s The Barber of Seville
Review by David Gregson: January, 29, 2006

We were promised good singers – and we got them. And if the production seemed to come out of another era –- well, it worked anyway. San Diego Opera’s “new” The Barber of Seville is full of many pleasures, although a fresh approach to opera as a total art form is not one of them.

Truth is -– San Diego is a conservative town, even when it comes to opera. The closest we ever get to innovative “director’s theater” -– or Regietheater (sometimes disparagingly and often accurately referred to as Eurotrash) — are the Baskin-Robbins ice-cream factory explosions of Zandra Rhodes, our beloved electric-pink-haired one-time trend-setting fashion designer (surely in her 70’s by now) who dreamed up San Diego Opera’s productions of The Magic Flute and The Pearl Fishers. And it will be interesting to see if we get another visit from Francesca Zambello whose Madame Butterfly seemed to upset numerous patrons.

While Los Angeles, San Francisco, and most notably the Long Beach Opera, have all hazarded adventurous stage productions of the standard classics, San Diego Opera (and Opera Pacific, for that matter), pretty much toe the line. So, last night’s season opener here of Rossini’s The Barber of Seville, offered no theatrical surprises or challenges. The sets and costumes of Desmond Heeley (built and owned by the New York City Opera) are light and airy confections evoking late 18th century Seville – or perhaps the entrance gate to a red-tiled, stucco slathered senior retirement community in Escondido. The design is also highly practical, basically an economical construction that can be turned one way or another to suggest both the exterior and interior of the house where our heroine, Rosina, lives with her warden Dr. Bartolo – a foolish old man ogling the toothsome youngster and her dowry.

The venerable Lotfi Mansouri, an old pro if there ever was one, was in charge of the stage direction – and in keeping with this highly conservative production, he has made the action clear and relatively free of extraneous slapstick, a type of humor he has not always proved able to resist in the past. In fact, for Barber first-timers, this show is almost ideal. The humanity of the characters comes first and the comic bits are j-u-s-t enough, rarely too much. Often a stage director’s overlay of shtick is an insult to Rossini, whose comic imagination is almost impossible to improve upon. Over time, he has become the accustomed victim of innumerable extraneous comic interpolations. And because he is among the few genuinely funny composers who ever lived (that is to say, he wrote hilariously witty music that actually makes you laugh whether or not you know what’s happening on stage), our ingenious producers often find themselves gilding a comic lily that can clown quite well on its own.

With a San Diego Symphony contingent in the pit under the direction of Edoardo Müller, the composer’s score received the clean, stylish treatment it demands, while the roster of singers, several of whom have been heard here before, impressed with their individual artistry and their ability to click together in the numerous ensembles. 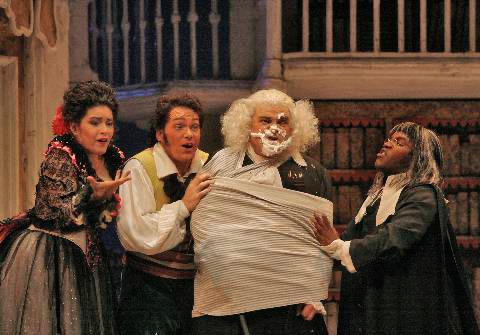 The revelation of the evening was American tenor Lawrence Brownlee, making his debut here in the role of the Almaviva, the romantic count who, disguised as “Lindoro,” woos his beloved Rosina in two ravishing Act One serenades – “Ecco ridente in cielo” and “Se il mio nome saper voi bramate.” For some of us hearing these passages, the names of two the greatest lyric tenors spring to mind – Luigi Alva, Cesare Valletti. But today as innumerable Rossini and Handel revivals occur throughout the world, it’s a safe bet that more young singers are being trained in the style of singing this music than there were back in the ‘50s. Brownlee, for instance, is such a master of the Rossini style that he even dared to show off at the end of Act Two by tackling a technically challenging bravura piece, “Cessa di più, ” a number ordinarily eliminated. Brownlee has a sweet, pliant voice with an extremely fast, attractive vibrato.

The title role, of course, belongs to the astounding indefatigable factotum and matchmaker, Figaro, who somehow finds time to work in a hair-dressing appointment or a shave. In this production he comes on stage flirting with any girl he meets in the street. As usual, he flirts with the audience too, since Figaro is one of those parts in which there is an inherent complicity between the common-man hero and the spectators. English baritone Christopher Maltman has everything it takes for this part. Some of us saw him here before as Laurent in Tobias Picker’s Thérèse Raquin. He is very much the modern baritone who has it all.

Nobody can deny that American mezzo-soprano Kirstin Chávez is a physical beauty – or that she has a marvelous rich voice and plenty of charm and stage savvy. But I was disappointed in her big aria – one of the most famous in all of opera – the “Una voce poca fa” that opens the second scene of Act One. She seemed to be experimenting with it, not quite sure what was going to work the best. That left an impression that hovered over everything else she did, no matter how well. She’s singing many major roles these days, but her Rosina may need a little more thoughtful reflection.

Really, with Argentine bass-baritone Eduardo Chama demonstrating lovely vocal resonance and an inventive comic flair (much of it via Mansouri, no doubt) as the absurd Dr. Bartolo; and with the ever-campy American mezzo-soprano Judith Christin as the maid Berta (who even gets her often cut aria, “Il vecchiotto cerce moglie”); and with – such overkill in a small part! – the incomparable Ferruccio Furlanetto as the music teacher Don Basilio, it’s no wonder this show is a hit. When Furlanetto comes on stage, by the way, suddenly all the other voices are dwarfed and you know you are in the presence of a world-class opera star. It’s lucky he likes to play golf in San Diego.

Technically things seemed to go off without a hitch (lighting designer Michael Whitfield kept everything awash in Spanish brightness), and the good work of chorus master Timothy Todd Simmons paid off once again. 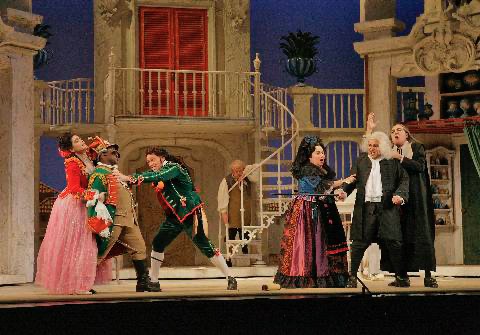