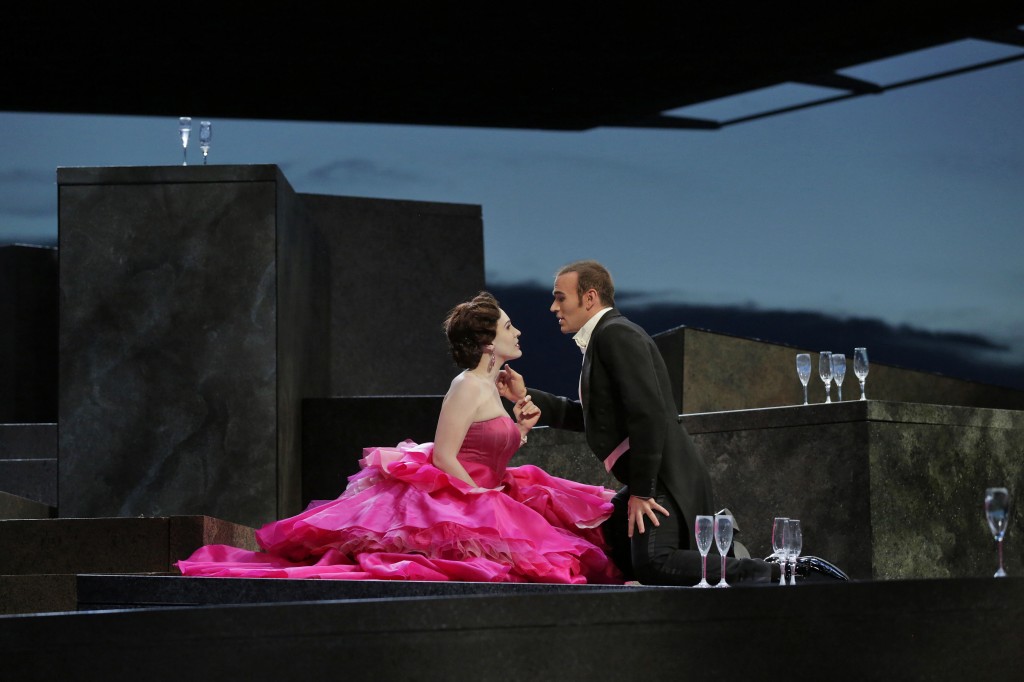 Because Santa Fe Opera quite understandably recycles some of its older productions, I feel I may be permitted to retread various things I have written about them before. This season, which overall has been one of the better ones in recent memory, reused a  Marriage of Figaro I first saw in 2008, and a La Traviata that premiered here in 2009. Stage directed by the highly imaginative Laurent Pelly, the familiar Verdi masterpiece featured a sort of stacked packing crate stage design by Chantal Thomas, plus Pelly’s own colorful costumes. Violetta’s shocking pink dress and orangey wig burned themselves into my retinas and memory. Back in 2009, the featured diva was none other than the irrepressible French soprano Natalie Dessay, a major star billing that guaranteed sold-out houses. This year we have an artist virtually unknown to me, the gifted American soprano, Brenda Rae, making her Santa Fe Opera debut in what appeared to be the same 2009 hot-pink frock, but sans the shocking wig.

After having seen this production for the first time, I wrote this: “As the familiar, delicate strains of the Prelude to Act One float up from the orchestra pit, we see a coffin, pallbearers and mourners all in black and carrying umbrellas. A disconsolate looking male figure is skulking in the gloom. And then we flash to a wild party, the carrot-haired hostess in a shocking pink flare-gathered party dress and emitting whoops of glee as she leads her guests in frantic, sexually charged revelry. Nothing looks at all like a Parisian drawing room, and an actual New Mexico sunset can be glimpsed over the distant Santa Jemez Mountains. And for the rest of the evening, this La Traviata will never so much as hint at the usual 19th-century French salon mise en scene one sees so frequently in productions ‘Out West.’ ”

In what I wrote next, I could virtually remove the name Dessay at each reference and replace it with Rae: “Making a refreshing departure into this new Traviata is Dessay. Certainly she is one of the few singers around with the ability and inclination to sing the difficult role of Violetta while performing virtually non-stop feats of athleticism – jumping from one high pedestal to another, riding the shoulders of partygoers and being tossed about by same, and crawling, creeping, and feigning consumption, collapsing and curling up into fetal positions – without noticeably missing a note. Even when Dessay was not moving very much, as in the last scene in which she is supposed to be dying, her very inaction of lying very still for such long periods of time became another gymnastic accomplishment.”

Rae sang the entire last-act “Addio del passato” while lying in bed and assuming a contorted posture that “in the day” would have been considered entirely impossible. Indeed, all this hyperkinetic acting was certainly undreamed of by most of the great Violettas of the past, Callas included. Under the circumstances, I felt Rae did a superlative job. Her voice initially seemed smallish to me — rather like a light lyric coloratura, and she certainly experienced no difficulties with the terrors of the famous cabaletta “Sempre libera” that follows the meditative “Ah, fors’ è lui.” Sadly, I found her dramatic Act Two utterance  of “Amami, Alfredo” quite underpowered. She, of course, had to build up more dramatic vocal sound as the evening progressed, and it was in these more tragic moments of the opera that she is (at the moment)  overshadowed by some sopranos with larger voices. What Rae accomplished, however, was extremely moving. 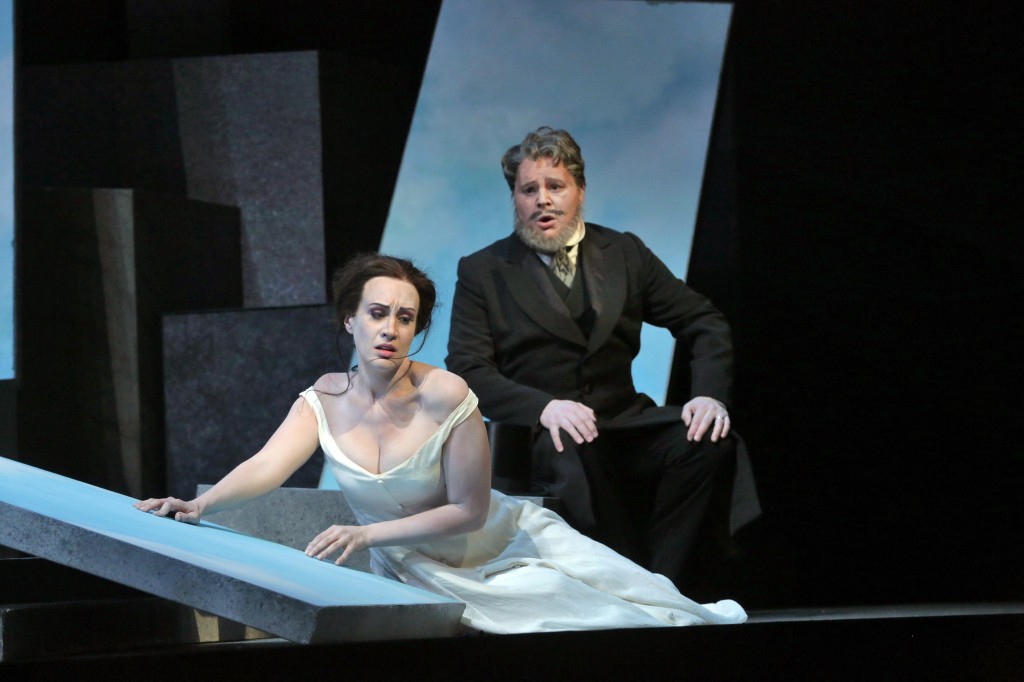 Rae was very lucky in being teamed with a dashing Alfredo, American tenor Michael Fabiano. When was the last time you saw a trim and handsome young man in this role? Fabiano is also gifted with a strong secure voice that has an attractive and pronounced masculine baritonal quality to it. Like so many young artists today, he also knows his way around the stage — and his steamy, lustful clinches with Rae were not at all embarrassing to watch. Displays of physical passion in opera can so often be cringe making if the lovers are of unequal girth.

The important role of Alfredo’s father, Giorgio Germont, was taken by UK baritone Roland Wood making his American debut. He is a throughly competent performer, but something about his vocalism was tentative at times and did not connect emotionally with me personally. Yet, so many judgments in opera are totally subjective. For instance, some people I spoke to loved the incredibly slow tempi and long pregnant pauses (Luftpausen) favored by the conductor, Leo Hussain. I do not think Verdi’s music benefits at all from this sort of treatment. For me the score dragged impossibly all evening. Perhaps some of the big cuts (such as Alfredo’s Act Two exit aria and some repetitions in Violetta’s Act One music) could have been restored had Hussain not plodded along in such a tiresome fashion. Give me the brisk Toscanini approach: its breathlessness was closer to what Verdi wanted. Hussain tends to brood sensitively and introspectively. OK, but a bit Wagnerian, really! That works for some listeners, but not for me.

As for the production, everything was performed (as I have said before) on a stage piled with box-like structures of various sizes and lengths. Not in the least representational, this abstract set design offered the director virtually unlimited opportunities for creating interesting stage pictures. The principals and chorus formed and reformed in clusters or groups in which some characters were higher than others. This was used in some cases to suggest dramatic relationships – as when Germont towers over a cowering Violetta. And wonder of wonders, the stage designer’s one unfortunate 2009 miscalculation, a quasi-representational Astroturf grassy bank, has been removed from Act Two. Called the “shag carpet” by some SFO insiders, it looked uncomfortably like a wall of dirt or manure covered with green moss. But that is now gone. In its place, the boxes glow with blue sky and white clouds, like large fragments from a Magritte painting.

The Susanne Sheston directed choral work was superb as usual, and Pelly never failed to use his forces in striking ways. The male partygoers in Act Three, for instance, did a parody of the Spanish ballet, and the gypsy number was a sexy noir-ish Ziegfeld pageant.

Pelly’s idea for the opera’s final moments leaves Violetta in dreadful solitude. It’s an effective piece of staging. As in 2009, the heroine becomes increasingly isolated (as opposed to being forgiven and reconciled with her lover and his father). Germont, the doctor and Alfredo withdraw from stage, stepping slowly backwards – and it is almost as if in the final moments of her life, Violetta is deserted by everybody and is hallucinating a vision of happiness. She dies all alone. 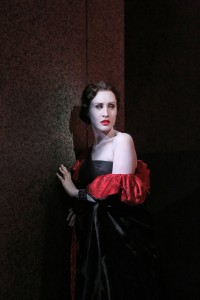 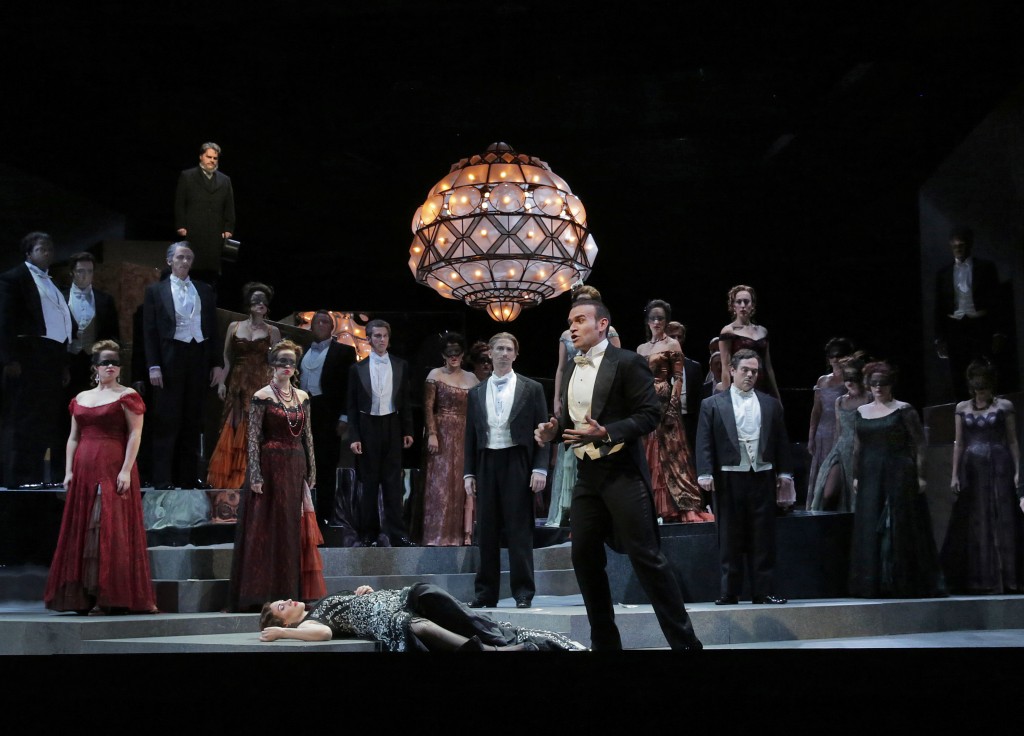