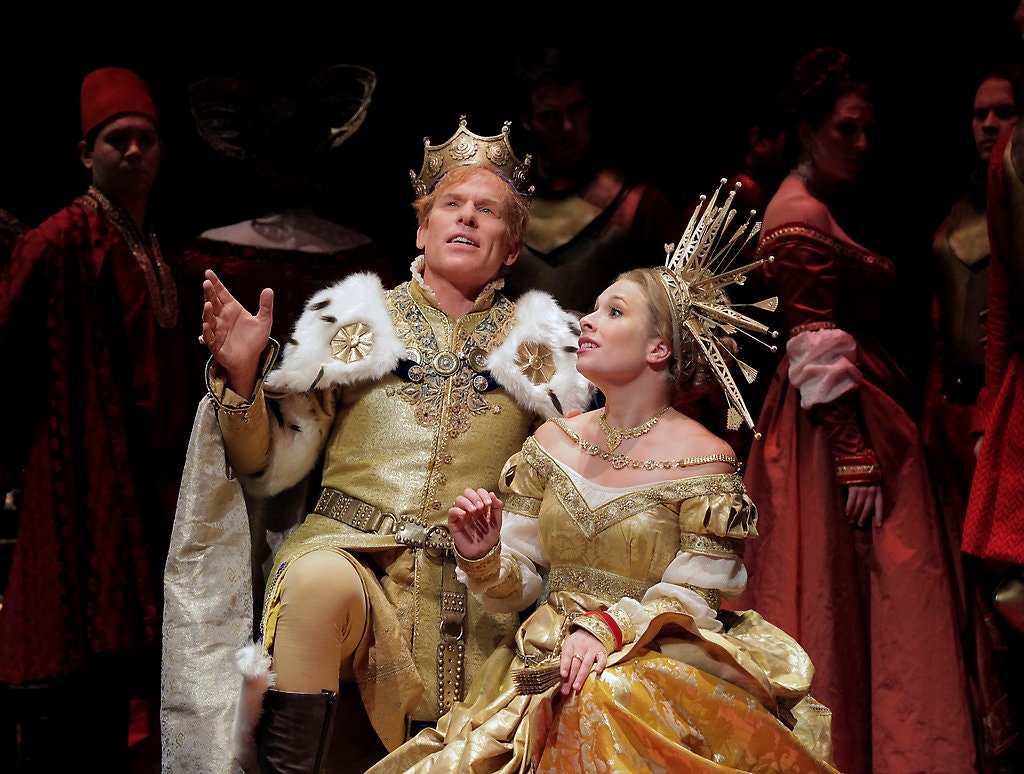 One of the principal attractions of the Santa Fe Opera has always been, for me at least, its presentations of contemporary and/or modern operas, as well as its explorations of less familiar repertoire. I am also among those long-time summer visitors who miss what once amounted to an annual tribute to the works of Richard Strauss. Sadly the Strauss days are gone, but the SFO still sticks its neck out for new (and older) works that are hazardous in terms of solid box office returns.

So — bravo Santa Fe Opera for daring to present the world premiere of Lewis Spratlan’s Life is a Dream, a piece commissioned long ago by a now defunct opera company in New Haven and awarded a Pulitzer Prize in 2000 on the basis of its second act. It’s perhaps simplistic to say, yet largely true I fear, that Spratlan’s work was begun when slavish adherence to the tenets of 12-tone/atonal and/or serial composition techniques was de rigueure. Anyone who dared to write tonal music was spurned by academia and the critics. So Spratlan’s efforts, however commendable, have been quite literally composed in an outmoded style. It might be said that John Adams, the largely tonal and misnamed “minimalist” composer now, dictates the new fashion for contemporary opera.

The trouble with long works written in a systematic atonal idiom is that more than one listening is usually needed for someone to BEGIN to grasp what it’s all about. As I am a seasoned consumer of contemporary music, and because I know that Spratlan has a vey good rep, I listened hard to Life as a Dream and tried hard to love it. Intellectually I could often, although not always, grasp what Spratlan was doing: his choice of different compositional choices for each character, his use of classical forms here and there. But I was left feeling that I could not evaluate the work properly without several more hearings — and the opportunities for that to happen are next to nil; SFO specializes in works that come around once and are rarely if ever heard from again. What I can say is, the opera is brilliantly scored and that the orchestra under the direction of Leonard Slatkin gave a powerful performance. The thoughtfully composed stage direction by Kevin Newbury is a model of clarity.

Vaguely alienating, however was the libretto itself, an English reworking of a famous play which I am ashamed to say I have never read: Calderón de la Barca’s La Vida es Sueño, a 17th-century classic . Calderón is honored by Spaniards as one of their greatest writers. His poetic texts are allegedly superb. But what one hears in the opera’s English libretto (James Maraniss) is stilted, repetitive and packed with metaphorical cliché. The imagery is tired and predictable — something one can almost never say of Shakespeare’s language. In addition, the illusion/reality dichotomy is hammered home exhaustively and exhaustingly.

It must be noted that Calderón’s La Vida es Sueño predates a play it closely resembles in theme by hundreds by hundreds of years — Luigi Pirandello’s Henry IV which deals with a powerful man who falls off a horse, hits his head, and when he awakens, he thinks he is the ancient King Henry IV. His wealthy friends humor him in his madness by becoming members of his royal court. Then he gets his senses back and thinks all the people treating him as Henry IV are crazy. This is a once popular existential idea: one can never know what is another’s mind or the true nature of reality. In fact, Pirandello wrote several plays on this theme.

The opera’s hero is Prince Segismundo, the victim of a prophecy that he will become a violent and tyrannical ruler. Learning this, his muddled-headed father, King Basilio, banishes him to an obscure desert tower, which, in this production, looks very retro sci-fi. The tower (which shrinks into throne at one point) is a sort of Jules Verne-ish telescoping metal affair set in a stage wilderness surrounded by several mechanical railroad crossing guards that raise and fall despite the fact no trains ever pass by. The nobleman, Clotaldo, is his caretaker. Segismundo is most unhappy, but one day Basilio orders that the prince be slipped a remarkable Renaissance mickey (like the one Friar Lawrence cooks up in in Romeo and Juliet) and brought back to the court unconscious. When he awakes he needs to prove he is worthy of the throne.

But — he’s perfectly wretched at ruling and throws a servant out a window, which simply is not done. Astolfo, Segismundo’s cousin and pretender to the throne, complicates matters, and Estrella, another cousin, makes things worse by exciting him sexually. So he is slipped another mickey and goes back to the tower where he is told he has dreamed everything. Segismundo is, however, much more deeply philosophical than little Dorothy of Kansas, and mulls over the very nature of reality. Later some rebels encourage Segismundo to lead a revolt against his father. Just before victory in this enterprise, Segismundo is filled with existential angst and he relents. Segismundo marries Estrella for the good of the state, rejects his beloved Rosaura in the process. Now — was it all illusion — or reality? This is Pirandellian territory to be sure.

The music must be the devil to sing, and SFO has a superlative bunch that is up to the task. Tenor Roger Honeywell sings heroically, almost bellowing his lungs out as Segismundo and looks terrific in the part. The part just too high and too loud most of the time for everybody’s comfort. Marvelous baritone James Maddalena is excellent as Clotaldo, and bass-baritone John Cheek both sings well and acts suitably befuddled as King Basilio. Soprano Ellie Dehn, despite her character’s mystifying function in the story, is superb as Rosaura. Tenor Keith Jameson manages to become the most sympathetic person in the whole opera, and he rather to runs away with every scene he’s in. Baritone Craig Vern makes a wonderful and at the same time somewhat hateful Astolfo, while mezzo-soprano Carin Gilfry is radiant as Estrella, the Queen to be.

Kudos for adventurousness and quality of execution go to Santa Fe Opera for this challenging and financially risky undertaking. We wonder where this dream will go from here before we start asking — did we see that one once, or did we dream we did? Spratlan was the composer, I think. It was cool that night and lightning flashed over the distant mountains.