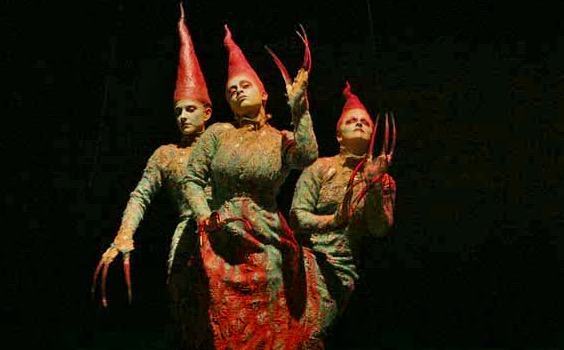 Purporting to be the ancient Beowulf epic told from the monster’s point of view, John Gardner’s novel, Grendel, is highly regarded and has a substantial cult following. Those who have read the original Old English poem (usually in an English translation and most often now in the relatively new Seamus Heaney rendition) know that none of the tale has anything to do with England. Beowulf is a Geat (a Swede), a hero of imposing stature who arrives unbidden from across the sea to assist the Scyldings (Danes) in their 12-year-long losing battle against Grendel, a horrible monster who nightly crashes the merry mead-drinking parties in King Hrothgar’s magnificent mead hall, Heorot.

Once our dauntless hero rips off one of Grendel’s arms, the monster runs home to mama and dies. So now Beowulf has another dreadful creature to contend with – and, sure enough, Grendel’s vengeful mother takes up precisely where her son left off, wreaking havoc in Heorot before retuning to her home in a nearby mere. Beowulf follows her to this bloody, sea-serpent infested lake, and, dressed in full armor, he swims to the bottom and polishes her off with his sword, Hrunting. He returns to the surface carrying Grendel’s head and is feted by Geats and Scyldings alike. Time passes, and much, much later, back in Geatland where Beowulf is now an aging king, he is killed by a dragon. Needless to say, the Beowulf epic told from the point of view of Grendel must necessarily end long before the original epic poem does. In fact, Gardner’s Grendel contains 12 chapters; Beowulf comes ashore in Chapter 11. He is never mentioned by name.

For a cult novel, Grendel contains remarkably little action. Most of it consists of metaphysical musings. (Many of these make it into the opera’s libretto verbatim.) Gardner plays around with the existential concepts of the “self” versus the “other,” and, through the voice of the Dragon, he flirts with nihilism. The monster is an eternal outsider who can never hope for acceptance by the race of men. In fact, the demonic/demonized outsider gives men their raison d’être, their reason to be, their means of defining themselves. Men’s concepts of honor, commitment, heroism, truth and beauty are all defined in terms of not-honor, non-commitment, not-heroism, not-truth, not-beauty – namely Grendel. Grendel is the necessary evil. But how does a necessary evil (like Judas) see himself? What can he do but go on being evil. Or should he do nothing at all? 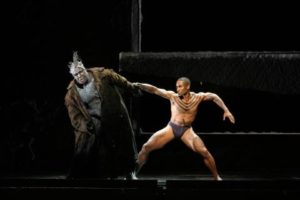 Gardner’s (and Goldenthal’s) Grendel suffers deeply. He can see the beauty of mankind that is revealed through the lyrical poetry of The Shaper (the harp playing scop, the great verbal/musical artist of the ancient world of thanes and mead halls), but he also knows that this kind of self-aggrandizing art is a largely a lie. At first beguiled, he soon sees through the sham of The Shaper’s art and through the heroic codes of conduct it celebrates. The “real” heroes are merely empty boasters like the hapless Unferth, a figure of ludicrous fun in the novel and epic poem alike.

Gardner’s Grendel speculates on everything – the nature of the universe, in fact. He doesn’t get much useful instruction from a jaded dragon that just likes to sit on its gold all day and talk about the endless, meaningless cycle of existence. Grendel is also disgusted with the mindless animals that surround him, all of them compelled by blind instincts. Yet, he finds Man’s attempts to theorize and organize absurd, and his religion ludicrous. In fact, Gardner’s Grendel becomes a sort of philosophical Everyman, searching outwardly and inwardly for meaning. Just how an Everyman can also be an eternal outsider is a mystery readers must solve for themselves.

It’s difficult to imagine how metaphysical meditations of this kind can be made into a successful opera – at least the kind of opera we usually love: the kind with hate, love and revenge personified by living, breathing men and women. Operas present the entire range of human passions through musical dramas involving situations, action and interaction. None of these things are inherently present in Grendel. Of course, even the original epic poem would make tough operatic material; the characters are not conflicted and they do not develop. They are largely mythic types lacking human dimensionality. You do not weep for them. You might not even give a damn about any of them. They’re just there, doing their heroic (or monstrous) things.

Celebrated puppet master and stage director Julie Taymor takes all of this and makes it into the expected fabulous stage spectacle: high-wire high jinx, eye-popping projections, incredible puppet creatures, flaming funeral pyres, shifting stage pictures, and acting and singing integrated with dance choreography. The whole nine yards. Goldenthal’s music, although tremendously derivative (Glass, Adams and a host of others), serves its purpose well and, despite long dull stretches, is attractive even in its dissonances. (There’s a great deal of doubling of the vocal line in the orchestra – just so you know you’re hearing a tune.) All the singers are marvelous. But the work’s plea for our emotional identification with the characters is one that did not work on this particular listener. I was intrigued in the way the material was being handled – the use of modern English and Old English, for instance (for the most part, Grendel is the only up-to-date speaker/singer), and I enjoyed the knowing literary references. It was, in fact, virtually impossible for me to imagine what someone unfamiliar with Beowulf or Gardner’s novel would think of the entire experience.

At the moment, you can find an excellent synopsis online.

Los Angeles Opera managed to assemble a stunning cast for this World Premiere, one that ran into more than its fair share of production difficulties. Technical and mechanical problems delayed the planned first performance, May 27, and subsequent performances on June 1 and 3 were designated as “previews.” It appears to have been worth waiting for – although, to be frank, it is almost impossible to imagine Grendel surviving as an opera on its own. Without the direct contributions of Taymor (stage director, co-librettist and puppet designer), George Tsypin (set designer), Michael Curry (puppet builder and designer), Angelin Preljocaj (choreographer) and Constance Hoffman (costume designer), the opera probably would not fly, literally or figuratively. Grendel needs the entire package. 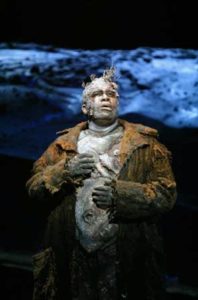 Dominating the stage all evening was, of course, American bass Eric Owens (creator of General Leslie Groves in John Adams’ Dr. Atomic) as the opera’s eponymous monster. It was a long, long role, and he brought it a fully realized performance in every department. If this man cannot move you with the story and the music, nobody can. I was not especially moved, but I was immensely impressed.

Glued into his harp costume, tenor Richard Croft was always a welcome presence as The Shaper. Tenor Jay Hunter Morris epitomized the pathetic hero manqué, Unferth. The fabulous Laura Claycomb is likely to go without competition as the embodiment of the beauteous Queen Wealtheow, the only feminine touch in an awful world largely without women. Mezzo-soprano Denyce Graves was supremely “diva-ish” as the jaded Dragon with the wonderful Dragonettes — Maureen Francis, Hanan Alattar and Jessica Swink – embedded in the tip of her stage enveloping tail. The shadow selves of Grendel (Jung times three!) were excellent: David Gagnon, Jonathan Hays, and Charles Temkey. Bass Charles Robert Austin was a superb Hrothgar (the definitive name for an ancient Lord!), running his medieval real estate developer’s tractor over trees and people while making one of the opera’s several environmental statements. Chorus and supers were super – but dancer Desmond Richardson, one of today’s great male dancers (Alvin Ailey, Frankfurt and ABT), may have stolen the show as Beowulf – not singing a single note.

The 100,000 lighting demands were superbly filled by Donald Holder, while Steven Sloane conducted persuasively. Both Taymor and Goldenthal received curtain calls before a cheering audience. But the Transcendence of the Great Big Bad must still survive New York before it can go on to eternal glory, momentary glory, or total defeat.