Composed near the end of his very long life and career, the opera Falstaff is much, much more than its common description — “Verdi’s only comedy save his youthful Un Giorno di Regno.” One is truly tempted to call the piece a “summing up,” except that it utterly refuses to take itself seriously. Falstaff is an astoundingly high spirited survey of life and art as Verdi saw it; at the same time, the piece asserts a stunning rebuttal to those critics who feel opera composers, by virtue of a supposed lack of a mastery of counterpoint, are inferior to – say — symphonists. At the same time Falstaff hilariously lampoons Verdi’s own familiar compositional mannerisms; and with the aid of Boito’s ingenious libretto which adapts and condenses several Shakespeare sources, it climaxes in an ebullient indictment of human folly in general. The work is unique, inspired, a miraculous outpouring of melody continuing from the first note to the last. The skill and complexity of the ensembles never ceases to astonish, and the dramaturgy, despite the crude (and often cruel) Elizabethan characters and absurd plot, is masterful.

Despite the innumerable technical challenges of the score, Falstaff is very rarely heard in a bad performance. It usually brings out the best in everybody. Expectations for a bang-up job in Santa Fe this season were high – and yet what I experienced August 11 was a bit tepid and just a little disappointing. What can be with top-notch conducting, stage direction and singing a breathlessly exhilarating experience seemed oddly shopworn. No insightful or even especially inspired direction informed it, while a few performances were poor or unremarkable, and even the important central role was “day-old” stale and conventional despite the efforts of an extremely fine artist, English baritone Anthony Michaels-Moore. He was good, but one always wished for him to give a little something extra – a lovingly phrased rendition of his reminiscences of his days as a page boy, for instance. But everything got hurried over – a rush without heady joy – almost as if SFO’s famous altitude had winded him along with the rest of the cast.

As the expression goes – something was missing, but just what is difficult to say. 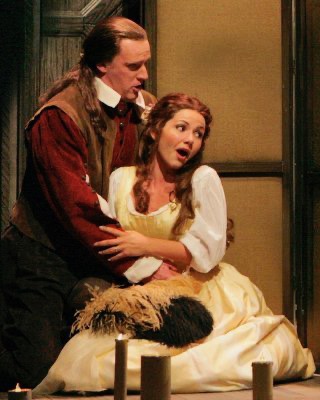 One thing is fairly clear, however: a disastrous bit of casting occurred when pretty Italian soprano Laura Giordano was given the role of the young love-besotted Nannetta. Although she is part of a sort of subplot diversion involving her and her boyfriend, Fenton, Verdi gives her some of the loveliest music in the show, and one always looks forward to her impersonation of the Fairy Queen in the Herne’s Oak scene. The aria is the opera’s one section of traditionally sustained lyricism (other than Ford’s more dramatic scena) – but Giordano’s wide vibrato spoiled this passage, just as it had marred the various marvelous exchanges between her and Fenton, sung competently here by American tenor Norman Reinhardt. Other “small” roles fared better – especially American tenor Keith Jameson as Bardolph and American baritone Wilbur Pauley as Pistol, two of Falstaff’s ridiculous cronies. Because of some quirks of the often unfocused stage direction, some audience members could not recall who Dr. Caius was or even if he was in the show, but he was, nicely vocalized by American tenor Corey Bix.

The “Merry Wives of Windsor” who are the fat knight’s fatal sirens were all perfectly fine performers, but veteran Falstaff-goers will certainly be able to recall more distinctly defined (and in some cases, funnier) characterizations than those offered by attractive American mezzo Kelley O’Connor as Meg, English soprano Claire Rutter as Alice, and especially American mezzo Nancy Maulstby as Mistress Quickly. Quickly can steal the show and often does with the right comic singer. Of course, all these women, as well as the men, handled their complex musical ensembles with apparent ease. 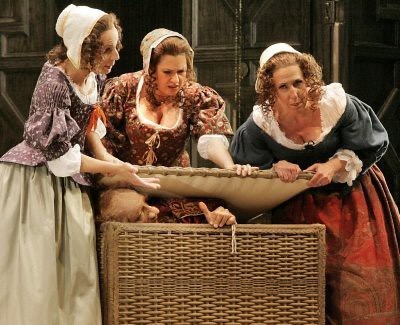 To be fair, this entire undertaking was a worthy one and certainly pleasurable, but for me it always remained on the second tier of my Falstaff-going experience. Allen Moyer’s Elizabethan sets seemed to be doing the best they could within a limited space and budget; the Santa Fe Opera orchestra under Paolo Arrivabeni played impressively, but without any large fires being ignited; and stage director Kevin Newbury stirred up a good deal of visual chaos without leaving any unique fingerprint of the production. In the final analysis – it was forgettable. 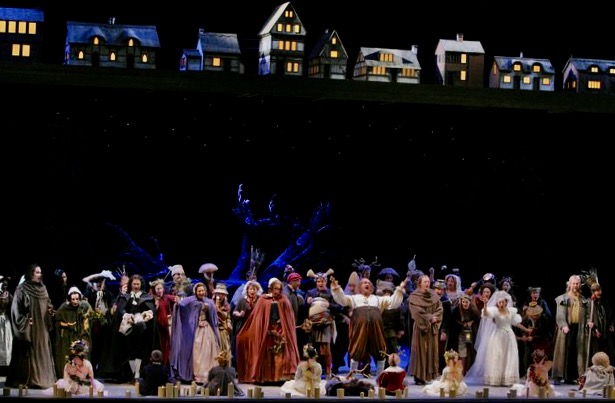