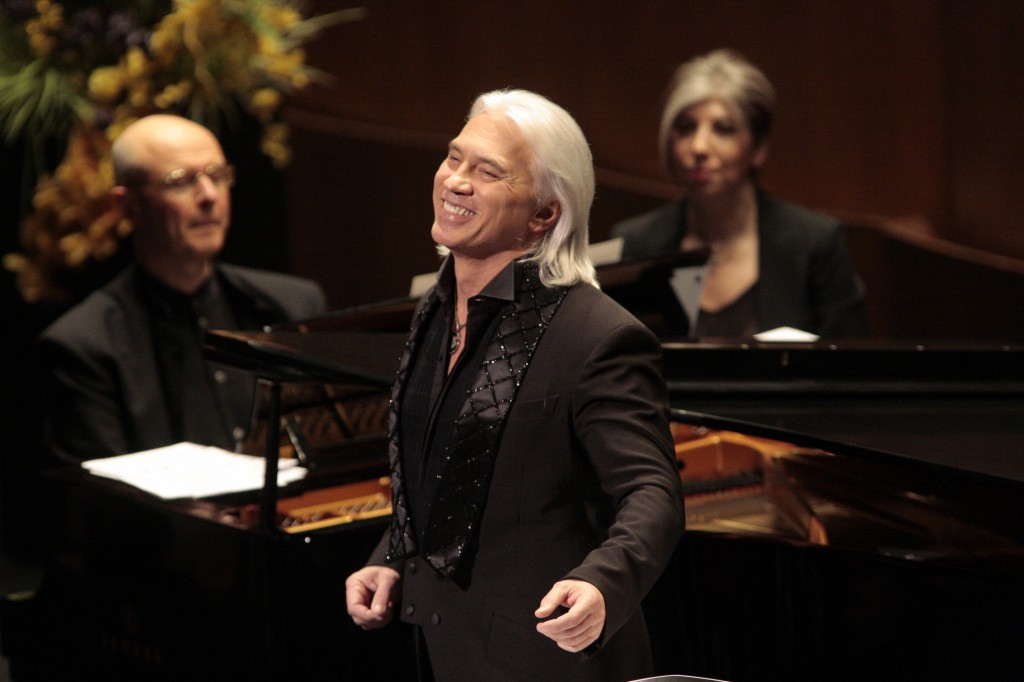 Hvorostovsky and Ivari Ilja in LA. Photo by Robert Millard.

In the fashion department, the great Siberian baritone Dmitri Hvorostovsky appears to be “learning from Las Vegas.” Elvis picked up his spangled sartorial splendor from Liberace. Dmitri may have the same model, although a dark and muted version. What was it he was wearing Thursday night during his magnificent but virtually funereal recital with pianist Ivari Iija at the Dorothy Chandler Pavilion? Was it “a long black coat with glitzy lapels covering an open black shirt” as Martin Bernheimer described it when Hvorostovsky appeared in New York recently? Or was it as Matthew Guerrieri called it in Boston, “a fashion-forward, spangled-lapel frock coat-cum-smoking jacket.” In the LA Times, Mark Swed has just called it “a dapper long-coat with a sparkly lapel” — the point of all this being that with his famous shoulder-length white hair and glittering evening wear, Hvorostovsky does not look or dress like a traditional high-brow art-song soloist. I don’t suppose Samuel Ramey did either in his heyday, but that’s another story.

And Thursday evening’s program was arty to beat the band. The first half was all sorrowing Russian soul, and the second a very gloomy and virtually unheard and unheard-of song cycle (Suite on Verses of Michelangelo Buonarroti, Op. 145) that Dmitri Shostakovich wrote when he was on the brink of dying in 1974. It seems Hvorostovsky chose LA to perform this rarely heard piece and is not performing it on any more upcoming recitals. Hvorostovsky’s one operatic encore, Iago’s “Credo” from Verdi’s Otello, was clearly chosen because the singer will be performing Iago in Paris this coming June. His final encore, perhaps the most moving part of the concert, was an unaccompanied solo Russian folk song, the text of which was decipherable only to those hundreds of Russians and Russian speakers who were in the audience and who received Hvorostovsky as if he were a national hero.

Virtually all the music on the program — with the exception of the Rachmaninov — was unfamiliar to me. I have listed the numbers below. All of them were vocalized with tremendous sensitivity and attention to the meaning of the words. For most of us this meant following a printed program of translations, something that is always a distraction. The Russian texts were not offered in the Russian cyrillic alphabet (something I am assured Russians find easier to read than phonetic transliterations). The singer displayed his now greatly matured voiced (he is 51) and showed off the entirety of his dynamic range. It’s an exciting voice — and only someone of such an immense talent and magnetic star stature could have pulled off this serious program so successfully.

Though the program was relentlessly solemn, Hvorostovsky actually flirted with the audience — and also notably with some mysterious lady in the front row. We learn from the LA Times that this was none other than Renée Fleming. DH’s associate, pianist Ivari Illja, proved exemplary. Nowhere did he draw attention to himself — except perhaps in the last of the Shostakovich songs, “Immortality,” in which the composer found himself in a humorously skeptical frame of mind.

Part I: Romances on Poems by Alexander Pushkin of Russian composers

Encores including Iago’s “Credo” from Otello.