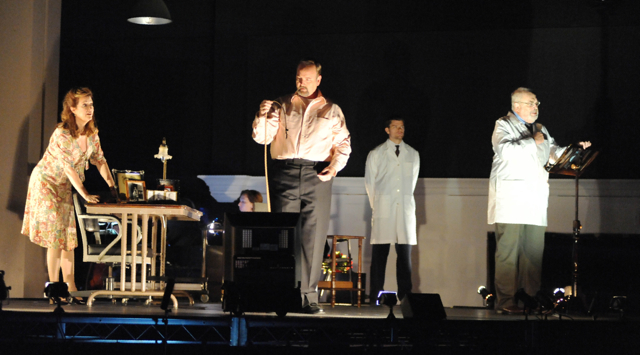 “The Man Who Mistook His Wife for a Hat”: Suzan Hanson, Robin Buck, John Duykers. Photo by Keith Ian Polakoff.

Normally I attend the first performances of each Long Beach Opera offering, but this month complications arose that prevented me from getting to The Man Who Mistook His Wife for a Hat until the next-to-the last performance. Now I am facing further delays in posting due to personal reasons.

For those few who may be dying to see a thumbs up or down on the show, let me say it was, surprisingly, a delightful and even touching experience. Thumbs up, if you require a digital evaluation from this critic.

Nyman’s brand of musical minimalism is just perhaps more melodically appealing than much of early Philip Glass, for instance. However, as John Adams has shown us recently with his magnificent Gospel According to the Other Mary, so-called “minimalism” as a school is shifting into something that may need another name: post-minimalism, perhaps, or neo-neoromanticism. So Nyman’s score is already “dated” in a sense. It dates from distant 1987, ancient history as it were. I once interviewed Philip Glass and he said, “Well, I call myself a post and pre-maximalist.” There you have it.

It’s a very brief work, just a little over an hour, and a very suitable piece for the ever-adventurous Long Beach Opera. Returning to the scene of their 2011 Medea, the work was staged in a corner of the EXPO Warehouse. The space is readily adaptable to various theatrical configurations (Medea was dead center), but the audience must sit on uncomfortable straight-back chairs, and the room seems to lack air conditioning, a bit of a problem on a hot afternoon like last Sunday’s. As for the restrooms — well, these were the most stunning portable toilets I have ever seen, almost topping the opera itself as a memorable thrill. Gleaming white inside, framed photos on the wall, a vase of dried flowers, and stainless steel washbasins. See for yourself what they look like outside and in. This is my first portable toilet review and I give it five stars!

With the small orchestra (string quartet + harp and piano) superbly conducted by Benjamin Makino located behind the performers, there were some sound delay effects that were slightly disturbing, but that’s all. The performers were as stunning as expected. Tenor John Duykers (a singer with a unique, utterly unmistakable timber) was Dr. S, a neurologist delving into the astounding phenomenon of visual agnosia, the Man’s primary problem; brilliant soprano Suzan Hanson (one of the finest singing actresses anywhere on stage today) was Mrs. P, the sympathetic, coping wife who loves a man who sometimes cannot tell her from a hat; and marvelous baritone Robin Buck (always welcome at the LBO) was the Man. In the end, music cures all and makes sense out of life. That’s the way it is for me.

Nyman’s score is easy, flowing, lightly lyrical and highly likable. I would be surprised if anyone thinks it’s a masterpiece. What carries the whole work, really, aside from a score that does not alienate, is the concise dramatic treatment of a neurological case study. The piece flirts with profundity. After all, contemporary philosophers have become more and more intrigued by perceptions and points of view that were formally marginalized and, as a result, thought to be crazy or worthless. The way the Man sees the world is sometimes absurd, sometimes poetic — as in a long song in which the Man sees a refreshing river flowing through what is, in actuality, a desert landscape.

The director, David Schweizer, makes maximum sense out of the proceedings, and he clearly has a deep affection for the work. The excellent lighting and costume designers are credited below.

I loved the way Nyman incorporated Schumann’s great song, “Ich grolle Nicht” into the fabric of the opera (the highest climactic note being thoughtfully supplied for Buck by Duykers). “I bear no grudge even though my heart is breaking.” God, I love the Dichterliebe, the song cycle that first convinced me that German Lieder was probably a bit of OK and I should hear more of it. For me, this song seals and steals the opera for me. Music is what makes life have meaning.

Here — I set out to say my review is pending, but I think this should do it. I plan to print LBO’s next season here at Opera West just as soon as it is announced.