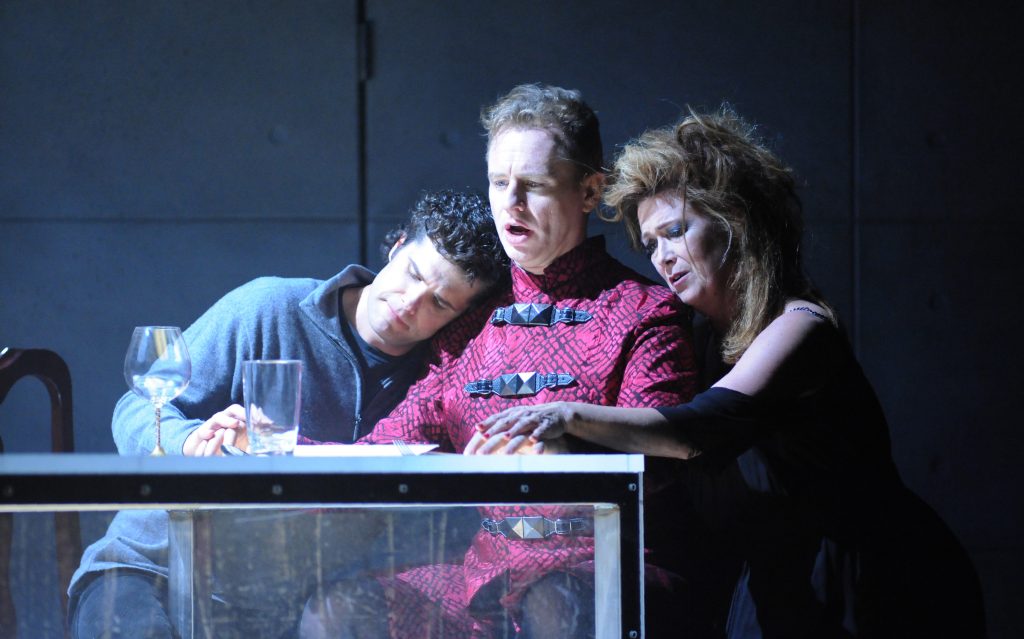 “It was a mystery all insoluble; nor could I grapple with the shadowy fancies that crowded upon me as I pondered. I was forced to fall back upon the unsatisfactory conclusion, that while, beyond doubt, there are combinations of very simple natural objects which have the power of thus affecting us, still the analysis of this power lies among considerations beyond our depth. There was an iciness, a sinking, a sickening of the heart — an unredeemed dreariness of thought which no goading of the imagination could torture into aught of the sublime. What was it — I paused to think — what was it that so unnerved me in the contemplation of the House of Usher?”

Well, sir — it’s a glimpse into your own soul. It is the poet, Poe, facing what lies in his own subconscious mind. And none off this is easy to figure out.

An allegedly sane, healthy man encounters his apparent polar opposite. Edgar Allan Poe treats this theme most memorably in his short story, ‘William Wilson,’ in which the protagonist is literally doubled. The good William Wilson dogs the tracks of the evil William Wilson. In the end of the tale, one Wilson kills the other Wilson with a knife. But the lives of both men, clearly projections of the artist’s divided nature (Wilson shares Poe’s birthday, in fact), are inextricably bound together. In Jungian terms, Wilson Number One might be termed the self, and Wilson Number Two might be called the shadow. They need to resolve their issues — but they don’t.

Carl Jung thought that all men and women have shadow selves, and reconciling these two opposites is necessary to the healthy individuation of the psyche. But, to be frank, Jung’s system defies any quick summarization inasmuch as it includes the masculine and feminine principles (the animus and the anima) among other things. If Roderick’s sister Madeline is the anima, it is in a state of permanent peril: Madeline is prone to cataleptic trances and ends up being entombed alive by her neurasthenic brother. In a sense he buries part of himself, but that self cannot be repressed and returns to haunt him. Premature burial, of course, was one of Poe’s obsessions.

To cut to the chase, my take on Long Beach Opera’s fascinating new offering of Philip Glass’s The Fall of the House of Usher, sees the visitor to the Usher mansion (William, superbly sung and acted by baritone Lee Gregory) as the self confronting a mammoth complex of disturbing unconscious turmoil that includes the shadow, Roderick Usher (the excellent tenor Ryan MacPherson), and the dreadful tarn and the cracked, doomed house itself. Complicating matters is the mysterious presence of Jung’s anima in the form of Madeline Usher (in an impressively assured performance by soprano Suzan Hanson). Glass has created a symbolically ambiguous Madeline: she speaks no lines, but sings in a continual wordless vocalise.

I think suggestiveness and complex ambiguity are an essential element in Poe, so I was not in the least bit bothered by stage director Ken Cazan’s attempt to graft a homosexual element onto the William and Roderick characters. Why not? But, despite his pre-performance remarks that his professedly heterosexual hunkentenor and barihunk had agreed that Roderick and William must have been very, very close as school chums, the homosexual elements of the production, overt as they were, did not overshadow the story’s multifaceted weirdness, and Madeline’s presence was accompanied by an incestuous aura Cazan said he did not intend. Ah well, the “intentional fallacy” is what this is called: the director may not have intended it, but it’s there anyway. 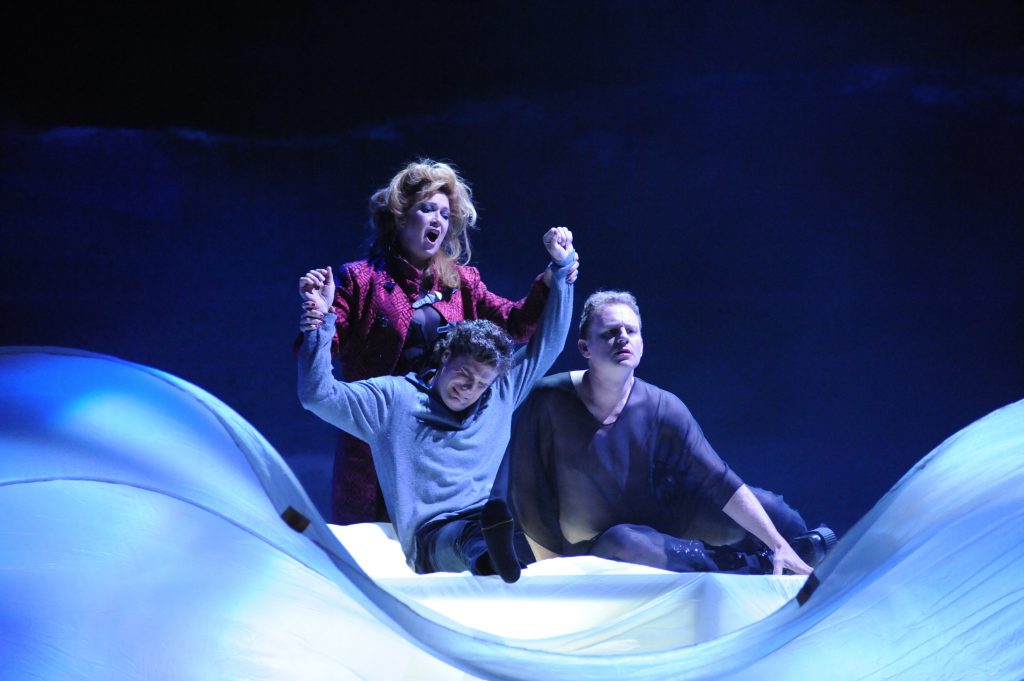 Of course, Glass uses his own version of the text — a libretto by Arthur Yorinks. Without that in hand, I cannot say what the stage directions actually indicate. What we got at the LBO was all controlled by Cazan. The virtually inexplicable presence of Madeline hovering about the two male principals resonated in such a way that we were forced into “dreaming dreams no mortal dreamed before.” And this is a good thing.

Because Poe intended “The Fall of the House of Usher” to mean both the fall of the physical house and the end of a dynasty, one would have to see the homosexuality of Roderick as the ultimate reason for the stop of the line. But that notion makes literal Poe’s more abstract fears of mortality. And that, I think, is a bad thing. It promotes the false impression that gay men cannot propagate through heterosexual intercourse. Even Tennessee Williams was not above suggesting such nonsense in Cat on a Hot Tin Roof.

I am among the many people whose admiration for Philip Glass’s work has grown tremendously over the past few years, and the offerings of the Long Beach Opera have been significant in increasing my appreciation. This work may perhaps be minor in Glass’s enormous output (so little of which reaches our eyes and ears), but I found it terribly effective, not only in the moods induced by the repetitive music, but by a sustained lyricism in the vocal writing. Once you have adjusted to Glass’s style, you may find its range of expressiveness is astonishing.

The production itself incorporated a “brutalist” concrete structure from all appearances, comprised of units that were intended to make the house breathe, as it were, which is exactly right for Poe’s intentions. Gothic creatures, some with raven-like mohawks, pushed these about gracefully although often intrusively — but I think I would have preferred something akin to the elaborate projections the LBO has used in the past. This house, allegedly occupied by generations of Ushers, seemed too jarringly contemporary to my eyes; and yet it brought to my mind another modernist setting effectively used in a Poe inspired film — Edgar Ulmer’s “The Black Cat,” one of the great Universal horror movies from the ’30s. Boris Karloff and Bela Lugosi face off in that one, and amidst stunning ’30s decor that is not in the least bit Gothic. The story, full of Satanism, mummified necrophilia, and sadistic torture (Lugosi skins Karloff alive), has nothing to do with Poe’s story, but it is certainly suitably twisted.

Formidable and always welcome tenor Jonathan Mack was on hand to give Roderick hypodermic injections, and baritone Nick Shelton effectively performed the duties of the Servant. Meanwhile conductor Andreas Mitisek wielded his usual persuasive command over a small ensemble that offered a surprising range of orchestral color.

I wish someone could afford to light the auditorium of the wonderful art deco Warner Grand Theatre where LBO is now visiting for a second time, but as I peered through the gloom, it does appear much restoration is needed. Still, I love these old palaces and hope they do not crack and fall like the House of Usher. 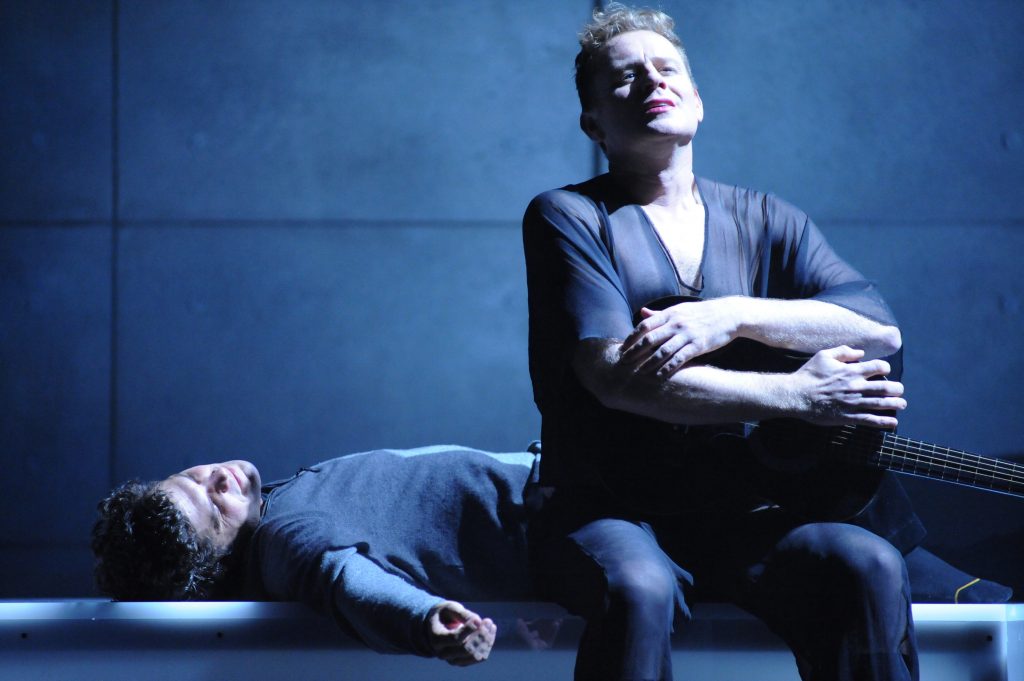