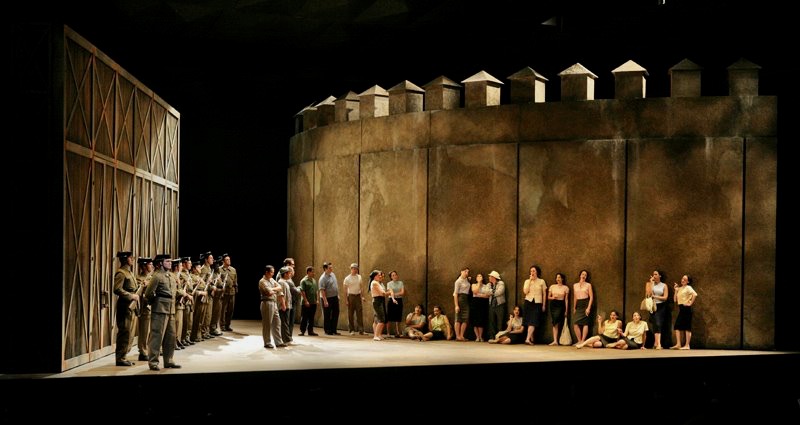 Those who were expecting a razzle-dazzle, postcards-from-Seville Carmen for the 50th anniversary season of Santa Fe Opera were in for a severe disappointment: Lars Rudolfsson’s radical yet probingly intelligent production dispensed with the dubious pleasure of slumming it among the colorful unwashed that we normally expect from grand opera versions of Bizet’s masterpiece. Instead, like Peter Brook in his La Tragedie de Carmen, this director opted for the earthier, slangy opéra comique version of the Prosper Mérimée novel. 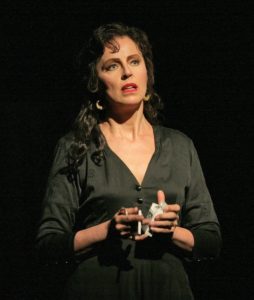 To hear the members of this opera’s criminal underworld spit out coarse epithets and expletives when they were not singing only intensified the power and intensity of the music when they were. This production reminded us why Bizet’s opera once scandalized Paris, and why it still has the power to affront our own pious bourgeoisie. It openly sneers at a thoroughly venal, corrupt military establishment, consisting of upper-class officers who brutalize and exploit their working-class cannon fodder.

The officers are also thoroughly racist in their treatment of that despised underclass, the Gypsies. Aping his supposed betters, Don José snobbishly mocks Carmen for pretending to be Spanish. Admitting her Gypsy origins, Carmen responds that at least she cares enough about Don José to lie about them.

To emphasize the point that official corruption and racism continue to bedevil our own society, Rudolfsson sets this Carmen in the 1950s of Franco’s Spain, a fascist military dictatorship turned loyal NATO ally, rewarded for its anti-Communism with American gewgaws, including a garish neon food dispenser that Carmen stuffs with coins to extract tàpàs. This sly send-up of a hypocritical American foreign policy during the Cold War also hints at our present situation, in which an inconvenient foreign dictator is deposed, while a home-grown one now occupies the White House, helpfully deciding everything for the rest of us.

All of this is merely implicit in this production, which is, however, explicit enough in interpreting this work as a battle between a rigidly conformist and militaristic society and Carmen’s band of outlaws, determined to be free of that society’s stifling rules and regulations. Bizet’s heart is with Carmen, as ours is with Anne Sofie von Otter as Bizet’s svelte, impetuous, dusky-toned heroine, who is not afraid to reveal a ruthlessly steely determination to remain free and unfettered beneath a façade of carefree sensuality. 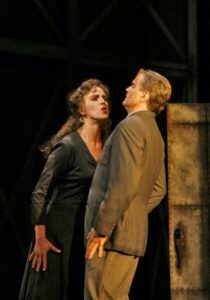 Aided by Alan Gilbert’s contemplative yet always lively and adroit conducting, von Otter’s was a thinking person’s Carmen, as much a victim of oppression as the victimizer of Don José, dramatically and vocally capable of both vulnerable lyricism and iron will in rejecting her former lover.

William Joyner’s Don José was a fine match for this Carmen: a Clark Kent unable to transform himself into the macho hunk of her dreams, a mama’s boy as manipulated by the emotional blackmail of his hypochondriac mother and her go-between Micaela as he was by Carmen and her demands that he free himself from his addiction to playing by other’s rules. He was quite convincingly psychotic by the time he confronted and murdered her, and heart-breaking in his despair when he realized what he had done. His was a fine, if vocally somewhat lightweight, traversal of this demanding role – one of the rare Dons Josés who have moved me to tears by the end of the opera.

Young Jennifer Black’s Micaela sounded all right, but she is not sophisticated enough as an actress to offer anything but the standard Little Miss Milquetoast that makes this character such a bore. Someday there will be a Micaela every bit as tough, opportunistic, and manipulative as Carmen, and we’ll all discover that Micaela is not such a goody-goody after all.

Laurent Naouri was more in tune with director Rudolfsson’s vision, providing us with a juicy-voiced Escamillo who was more interesting than the usual athletic braggart. This toreador was anything but disturbed by Carmen’s preference for brief love affairs; in fact, that suited this Gallic cynic just fine, since he treasured his freedom as much as she did. One wondered who would dump the other first.

Neil Patel helped realize the director’s iconoclastic vision with massive sets that evoked a gloomy, repressive totalitarian regime, evocatively lit by Duane Schuler. In sum, this was a Carmen that adequately reflected our own frightened and mean-spirited time.