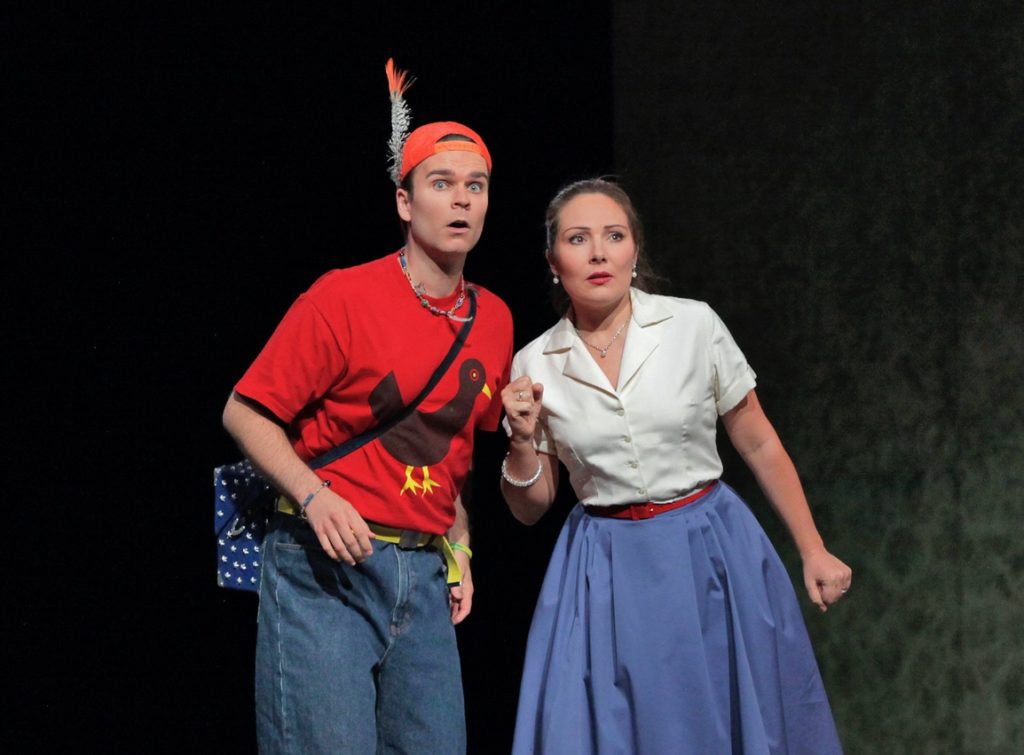 Given a large-enough budget, imaginative opera producers with a taste for the fanciful tend to go all out on the magical aspects of Mozart’s “The Magic Flute.” The forest beasts so readily rendered harmless by Prince Tamino’s playing come from the farthest reaches of the fantastic, often including startling species never envisioned by the composer and his librettist, Emanuel Schikaneder. The Queen of the Night may make her entrance with the entire starry empyrean as part of her voluminous gown. The enormous serpent that menaces Tamino at the start of Act One may envelope the stage in its coils. The three boys sent to guide our heroes may float through the air on balloons or golden chariots. Sarastro’s realm can glow with the splendor of the sun.

Indeed, there is a tendency for the opera’s magic to be a bit much — often at the expense of its more serious, ritualistic elements. But, not to worry about such wretched excesses in this current Santa Fe Opera revival. In this case, there is hardly any beguiling fantasy at all. This is an awfully drab show, and some wags have dubbed it “The Unmagic Flute.” The visual minimalism quickly becomes tiring — even annoying. And the costume choices merely make things worse, even illogical. Papageno, opera’s most famous bird man, is just a guy in a red T-shirt, athletic shoes and turned-around ball cap. This hardly makes him an unrecognizable biological specimen, although Prince Tamino (dressed in slacks with a sort of silver slip-on Sir Lancelot breast plate) seems to think so, and so does the Moor Monostatos, costumed as a Caucasian storm trooper in this production. The Star-Flaming Queen of the Night is a dead ringer for Bette Davis in “Elizabeth and Essex” and so are most of her retinue. Princess Pamina is perpetually in ordinary clothes, and all of Sarastro’s followers look like Thomas Jefferson or Benjamin Franklin in mourning. Ah yes, they are really dour Freemasons, but let that fact stay as subtext or a program note.

Somehow stage director Tim Albery compounds the stultifying impression of Tobias Hoheisel’s sets and costumes with a flaccid dreariness unparalleled in this writer’s considerable experience with this marvelous Singspiel. Rarely has the Queen of the Night been forced to make two such absurdly understated appearances in a role that often brings down the house. Poor first-year apprentice singer Lindsay Ohse (replacing ailing soprano Erin Morley) should have just said, “Screw this dull stage direction! I’m going to tear up the place, shake up the world and become famous overnight.” Instead, she came in and went out like a lamb and overnight superstardom ain’t gonna happen. Of course, not a soul in the audience was anything less her fan: who wouldn’t pull for an apprentice singer taking over a role of such awesome importance? 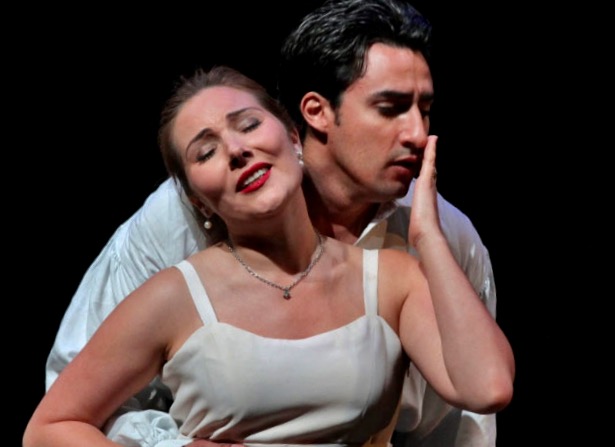 Tenor Charles Castronovo and soprano Ekaterina Siurina (husband and wife in real life) were the romantic leads, Prince Tamino and Princess Pamina. Both excelled in their parts — so-called “hunkentenor” Castronovo gaining gradually in security and beauty of tone as the evening progressed, and Siurina providing a model of sensitivity and style in her arias. She was wooden in her spoken English dialogue, her husband less so, but all the dialogue from all members of the cast was amateur night at the Bakersfield Starlite Opera from start to finish. Despite conductor Lawrence Renes’elegant and often vigorous leadership, the spoken passages tended to make things appear to lose propulsive energy from number to number.

Baritone Joshua Hopkins had his insipid get-up to contend with, but he was an attractive Papageno, not overly cute (as this role tends to be with the singer usually playing to the children and idiots in the audience), and his duet with Pamina was lovely. Soprano Jamie-Rose Guarrine was his pleasing Pa-pa-pa-pa-papagana. Basso Andrea Silvestrelli possesses a booming voice with a fuzzy timber that takes some adjusting to, but he made an effective Sarastro despite mundane stage direction that subtracted much of the character’s unique dignity and mystery. Talented tenor Timothy Oliver surely would have made a more memorable impression had he not been forced into the role of a sort of Nazi general with a flock of SS troops trailing along. Baritone Dale Travis was excellent as the speaker. The three spirits in this show were novice monks in saffron robes, boy sopranos staying out well past their bedtime.

Director Albery was unable to resist giving this dull show his special touch. The Queen of the Night comes back from hellfire to kiss the hand of her master Sarastro. How this is more PC than having the strong-willed woman fight the male establishment and then be damned for it, I cannot tell. Kissing the arse of Sarastro seems more demeaning to me than burning for all eternity.

Santa Fe Opera hasn’t had much magic in its “Flutes” during the last decade. Time they give us some enchantment again.

UPDATE, Thursday, August 12. A reader writes: “You do not mention the incredibly lame “wild” animals that Tamino charms when he doesn’t play the magic flute (the flute just sits there on the floor and supposedly plays itself). Or how Papageno whistles instead of playing pan pipes. Or how Pamina’s costume looks like a cross between a 1950s poodle skirt and a Catholic girls’ school uniform. Or how the three boys look like Hare Krishnas. Or the silly, rhyming singsong English dialogue.”