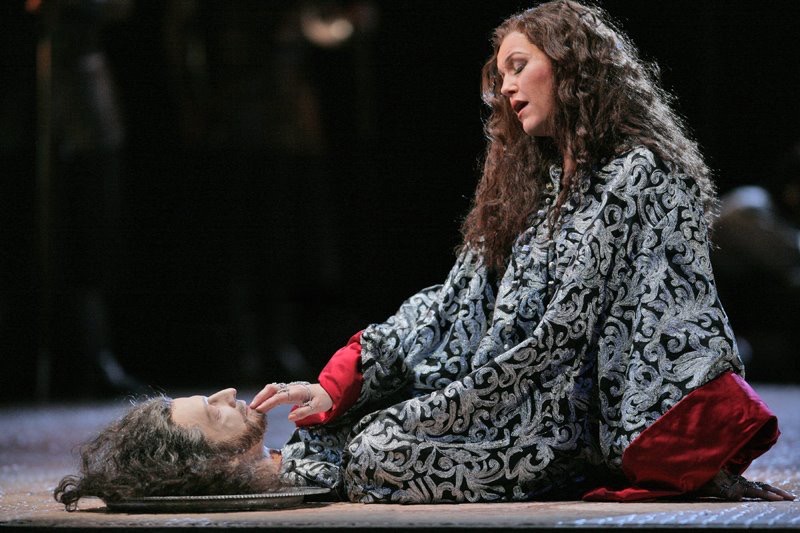 Review by Gerald Dugan. All photos by Ken Howard.

Artist ID’s at end of article.

On the basis of having seen three Richard Strauss operas directed by Bruce Donnell at Santa Fe Opera – a virtually definitive Ariadne auf Naxos (1999) conducted by the late, great John Crosby, starring Christine Brewer as Ariadne and Elizabeth Futral as Zerbinetta, performed in an 18th-century villa modeled on the ancient Greek skene where both the first tragedies and comedies were performed; The Egyptian Helen (2001), again with Ms. Brewer in the title role, again conducted by Mr. Crosby in what was his final Strauss performance; and this 50th-anniversary Santa Fe season Salome – I think I am entitled to say there is no better director of this German composer’s operas living in the United States today than Mr. Donnell.

To give the reader an idea of just how meticulous his direction is, I will now discuss one of the most important characters who appears in this opera, but does not sing or even say one single word: the executioner. This is a character who is almost never reviewed because he is usually something of an embarrassment: a big, muscular lug, sword in hand, silver tray in the other hand, who trots down the cistern steps to kill Jokanaan (John the Baptist) with all the nonchalance of someone putting a new fuse in a fuse-box.

Not the carefully coached Matthew Peterson, however, who moves with the focused energy and menace of a lithe jungle cat, slowly, holding himself in reserve until called upon to strike. The other guards in Herod’s palace skitter away from him, but not so rapidly that he might take notice. (Will one of them be next to feel the razor-sharp blade of his sword slice through one of their necks they wonder?) Stronger than the others and radiating a strange, animal power, he never looks at a woman or another man, since there is no one at court who does not fear him: a true celibate, despite his spectacular, half-naked body, the only thrill he may experience is moving in for the kill as he inches down the cistern steps, crouching low to take the prisoner unaware, then leaning all the way back in the darkness, before plunging all the way down with the sword until he hears the satisfying thud of the severed head on the stone floor, and may notice for the hundredth time, that he’ll have to spend more of his disposable income buying a new under-apron loincloth now that he’s flooded another one again. (Far-fetched? Decadent? Who would want to be an executioner except a psycho erotically thrilled by the sadistic act of murdering someone else?)

Why do I go on so long about Mr. Patterson’s fine silent performance? For the same reason, probably, that director Donnell doubtlessly integrated him into rehearsals with the full company early on: for the brilliant coup de théàtre at the end of the opera, after the executioner has presented Jokanaan’s head on the silver tray to Salome, and then crept up the stairs again, turning his back on her during her long song of love to the Baptist’s head, his own head turned in her direction over his shoulder, his bare back glistening with sweat as he waits, waits, waits. When Herod finally orders the guards to “Kill that woman!”, the executioner is ready for the evening’s climax. Instead of the soldiers “crushing beneath their shields Salome, Princess of Judea,” as the stage directions indicate, Salome will suffer the same fate as Jokanaan: decapitation. Each guard grabs a separate wrist and forces the princess to he kneel in front of the executioner. In the center of the stage, just as the last thundering chords play, he lifts his sword high above his head, the hint of an ecstatic sneer playing about his mouth, and plunges the sword down as the lights black out.

It is the attention to such small details as the acting of the role of the executioner that differentiates a master director form a routinier. That being so, I have only one or two complaints about Mr. Donnell’s directorial choices. Why is it, in nearly every production of Salome I’ve ever seen, the decapitated head of Jokanaan is much too light? A human head weighs at least 10 or 12 pounds. Greer Grimsley’s head probably weighs more. Can’t the person in charge of props be instructed to make the head a certain weight? It shouldn’t be up to Janice Watson or any other Salome to have to remember to flex her muscles when handling the head; besides which, this head looked distinctly smaller than Grimsley’s. The fact that there was no blood on Salome’s lips, face, or robe made the willing suspension of disbelief impossible in this case – all of which robbed the audience of that shiver of horror that they had every right to expect — indeed to demand. If the audience does not believe the head is real, what’s the point of doing a full production of this opera instead of a concert version? At least once, for long moment, Salome should have held the head in profile, as in the famed Beardsley illustration. Had she kissed the lips in that position, that also would have increased our sense of horror. This director, good as he is (and as good as most of this Salome is), seems to shy away from that which is horrifying, which he might think as too disturbing, or in bad taste. But there really can be no such thing as a tasteful Salome, since Oscar Wilde’s play and the Strauss opera are both portraits of a demented psychosexuality leading to a gruesome murder and a fetishistic adoration of a severed head. Trying to “tone down” this material is akin to toning down Hitchcock’s Psycho by cutting out Janet Leigh’s horrifying murder in the shower.

The other obvious gaffe is Herodias’s non-reaction to Herod’s “Kill that woman!” This is a mother witnessing the death of her own flesh and blood, however demented the child has revealed herself to be. Wouldn’t her mother at least faint in horror, sliding out of her throne onto the floor? Is Herodias really this cold — to watch her own child being killed without batting an eye?

Of all the roles in the standard repertory, I can think of none more demanding than Salome. Strauss calls for a singer “with the body of a 16-year-old and the voice of an Isolde.” In the last half hour of the opera, she must perform a 10-minute, increasingly frenzied striptease, followed, without much of a break, by a 20-minute, incredibly demanding monologue to a decapitated head, over a huge, cacophonous, post-Wagnerian orchestra. Since World War II, there have been “Isolde” Salome’s (Birgit Nilsson, and, in an un intentionally hilarious party DVD, Montserrat Caballé, discarding veils like Kleenex, and then looking lustfully at the head, as if she’d like to have it for dinner.) There have also been reasonable facsimiles of 16-year-old Salome’s (Ljuba Welitsch, Maria Ewing, Karita Mattila) who can convincingly manage both the sexy dance and the macabre final monologue.

The British soprano Janice Watson falls into this second category. She is a very convincing, spoiled brat 16-year-old, shamelessly aggressive in her openly sexual pursuit of Jokanaan (for whom she really performs the Dance of the Seven Veils, getting on her hands and knees above the cistern and doing a few bumps and grinds to remind this right-wing, Fundamentalist fanatic what he’s been missing all of these years). She also manages the final vocal marathon without running out of gas. If she just misses greatness in this role by inches, it may be that she is a mite too controlled. As disturbed as this Salome is, I never believed that she had descended into irretrievable madness, in quite the same way that, say, I believe Maria Ewing did in her legendary Los Angeles Opera Salome, directed by her husband at the time, Peter Hall. There was something frighteningly psychotic, yet bland in the way Ewing’s Salome kept demanding the head of Jokanaan when Herod kept frantically offering her everything else. Ewing leaned back against a wall, and kept calmly repeating her demand in the same flat, bored tone, knowing full well, having manipulated him so successfully in the past, that Herod would eventually give in to her now. This and what she did with the head – that horrifying head with an artery protruding below the severed neck, covering her robe with jets of blood as she cradled it and fondled it, as if she expected it to come alive, and answer her frantic kiss.! Never was that rarest of all phenomena, an instant, totally spontaneous standing ovation on the parts of 3000 people more richly deserved.

Yes, yes, comparisons are invidious, but when you have a performer on the very same stage who is such a completely convincing schizophrenic as Greer Grimsley as Jokanaan, one would hope that his kind of totally committed nuttiness would be contagious. Fresh from his triumph last year as an unexpectedly youthful, sensual Wotan/Wanderer in Seattle Opera’s great Ring, Grimsley offers us a thrillingly sung, definitively enacted Jokanaan, whose scene with Salome is this production’s memorable highlight. How does he do it, I can’t help wondering. Does he visit asylums, or just notice the behavior of crazy “Jesus Saves!” bellowers on crowded street corners – the kind of right-wing nut burgers everyone else rushes away from as quickly as possible? He is surely the most thoroughly deranged Jokanaan in my experience – if not ready for the executioner’s blade, perhaps, he is fully ready for the straitjacket and the men in white suits. Bravo!

Bravo, too, to that legendary 79-year-old Herod, who has virtually owned this role for 50 years, Ragnar Ulfung. (He’s even the Herod in that 1950’s style Arabia Nights Salome DVD with Caballé). In over 30 years with the Santa Fe Opera, he’s played this comically lascivious, lewd generate in nine different productions. He is nothing less than a living, breathing affront to Viagra. Only the great Hans Hotter ever sang a major role (Schigolch in Lulu) when he was around the same age, at the San Francisco Opera in 1989. Long may Ulfung reign!

Anne-Marie Owens is a commendable Herodias, particularly when she learns that her lovely daughter wants the head of the man who’s been accusing her of incest for marrying the brother of her first husband. It isn’t her fault she’s given nothing to do when her beautiful, loyal; daughter is sentenced to death.

Dimitri Pittas is also excellent as a the gentle, erotically obsessed, yet hopelessly deluded Narraboth, the young guard Salome manipulates into releasing Jokanaan from his cistern. He possesses a lovely tenor voice, which is particularly moving when he discovers that his beloved Princess of Judea has no interest in him, but is fascinated by the lunatic howler in the cistern. I must have blinked, or he may have turned his back to commit suicide (more of that damned directorial good taste?) The next thing I knew, he was so much road-kill that Herodias had to order removed. That’s life in the big city!

If I have not mentioned John Fiore’s conducting, it because I am saving the best for the last. Not since the great days of Fritz Reiner’s Chicago Symphony recordings have I heard Strauss played with such visceral intensity, combined with such transparency of texture that made whole strands of lyricism apparent that had not been heard before. This was the Santa Fe Opera orchestra operating at peak form, inspired by that rarest of contemporary beings, a truly great young conductor, constantly inspiring those on stage to give their best as well