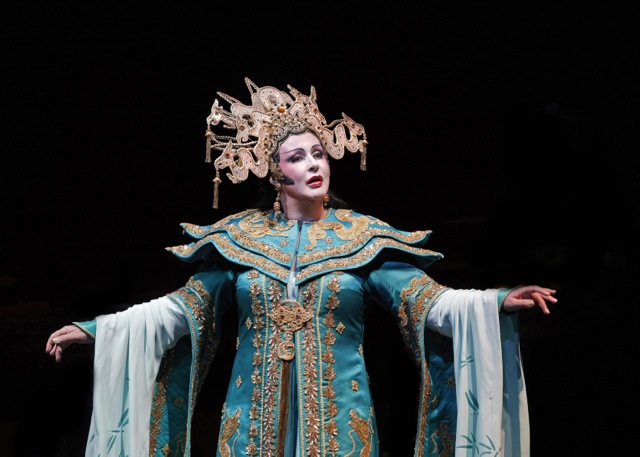 If it be “Turandot,” let us have a surfeit of it. Check!

Strangely, there was a sense of continuity between the San Francisco Opera summer-season “Ring” cycle and the fall-season opening “Turandot” Friday night. Both times the walls of the War Memorial shook with the power — not just excessive volume — then of Wagner and now of Puccini. Then the SFO Orchestra whipped into a frenzy under the baton of Donald Runnicles, and now tonight under Nicola Luisotti.

At this umpteenth revival of David Hockney’s color-saturated production, the air shook with Ian Robertson’s SFO Chorus riding the waves of Luisotti’s orchestra, and then — another surprise — Marco Berti, former lyric tenor, gave the clarion calls of a true heldentenor, singing better than ever here.

How strange it was then, that against Berti’s evening-long star performance, to hear his mediocre “Nessun dorma,” the tired hit-parade aria not getting any applause — a first in my experience.

Back to the “Ring” theme again, in the title role: Iréne Theorin, the Swedish Wagnerian soprano in her San Francisco debut. Another big voice, fitting well into the color and sound-impregnated evening, although the voice often turned mildly but clearly sharp.

Among the many musical moments, Adler Fellow Leah Crocetto’s wonderful appearance as Liu. She especially impressed with her Act I aria, sung with precision, feeling, and restraint. Crocetto has the power to blow down the walls, and in this first important “hometown” role, there must have been a temptation to sing big. Instead, she sang well, surpassingly so.

Rarely have I heard such a fine Ping-Pang-Pong trio as Hyung Yun, Greg Fedderly, and Daniel Montenegro. It was a joy to have an audible Emperor (Joseph Frank) and Timur (Raymond Aceto).

Garnett Bruce’s direction followed the original from the early 1990s closely, adding only some unpleasant crowd bouncing; there is much to be said for standing or crouching, but not for pretending to be on a trampoline.

Lengthy pre-curtain announcements included news of General Director David Gockley’s contract being extended by another five years; and acknowledgment of Jan I. Shrem and Maria Manetti Farrow donating $3 million to the company to promote Italian repertory. 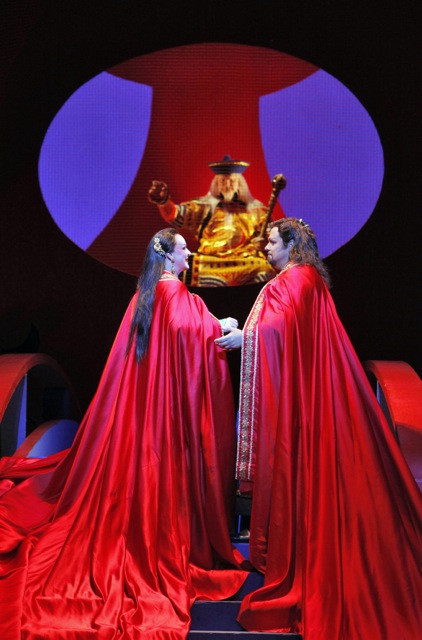