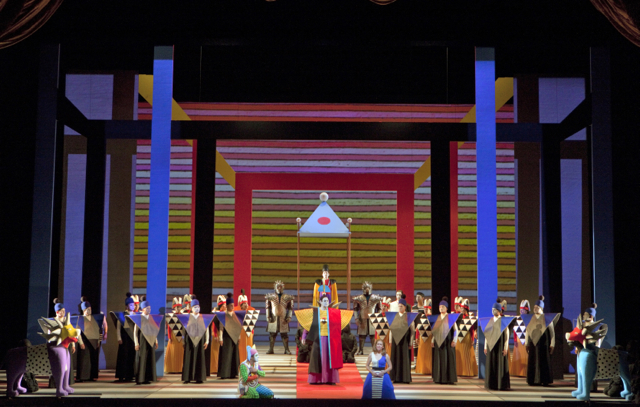 Advertising for the new San Francisco Opera production of Mozart’s The Magic Flute focuses on the design by Jun Kaneko, and it’s small wonder. The set consists of 3,000 tempera-and-chalk paintings, projected with Autodesk Inventor 3D software.

When the production premiered Wednesday night in the War Memorial Opera House, the initial impression was of the kinship with Mondrian’s Neo-Plasticism, grids of vertical and horizontal lines. The difference: Kaneko’s work is projected over the entire curtain, and later on the back wall and side panels, size dominating beyond the way a painting can.

Also, instead of square static images, there was constant movement: lines running up and down and sideways in straight and curved patterns. On stage: Kaneko’s giant Japanese-inspired costumes, the inverted pyramid samurai shape dominating. Also, cute, phantasmagorical animals appearing now and then.

It sounds too much, but somehow all came together, created a mood and environment, and (most of) the audience just came to accept and even enjoy it

There was also the music, very well performed, and a fine cast, which — according to rumor — has been subject to a fast-spreading bug. In fact, a pre-curtain announcement said Alek Shrader is going on as Tamino, in spite of his indisposition. The super-talented Merola/Adler alumnus sang a great, unblemished performance. 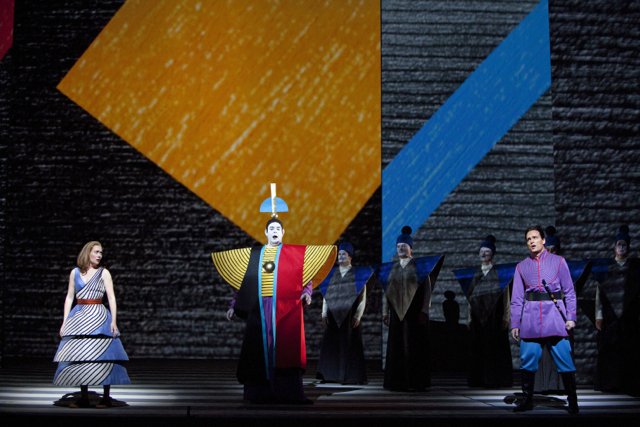 Nothing was said of Kristinn Sigmundsson’s state of health, but unfortunately the company-favorite bass who normally could ace Sarastro in his sleep clearly struggled with hoarseness.

Albina Shagimuratova, a stratospheric coloratura with an outstanding middle voice, is the queen of the Queen of the Night — a sensational performance.

Heidi Stober’s Pamina was a singing/acting joy, and Adler Fellow Nadine Sierra’s all-too-brief appearance as Papagena gave notice of an important career in the making as a musical actress.

After the embarrassment-of-riches casting of the three secretaries in Nixon in China — Ginger Costa-Jackson, Buffy Baggott, and Nicole Birkland — the Flute Three Ladies assignment went to Melody Moore, Lauren McNeese, and Renée Tatum. Unlike the ensemble-only secretaries, these roles call for some solos, however brief, and these three stars of tomorrow did their best. 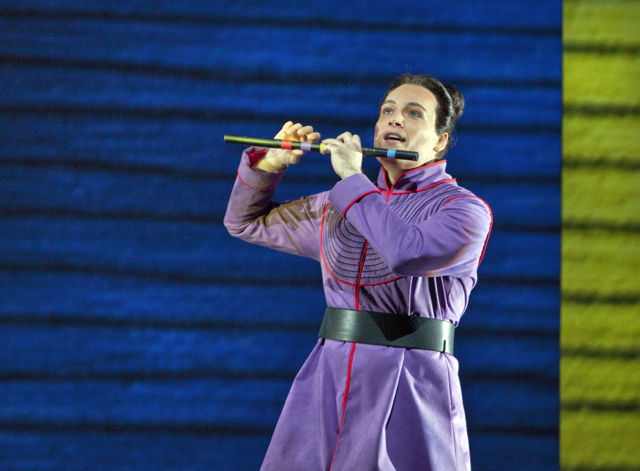 Scottish conductor Rory Macdonald made an impressive debut, with steady, clear musical lines, fine balance, and supporting the singers well. Harry Silverstein’s stage direction made a mostly successful attempt to keep attention on the cast, even against Kaneko’s over-arching production. Ian Robertson’s Opera Chorus sounded underpowered when off-stage, but was robust in its front-and-center passages. (So much is amplified in this production, why not give a couple of mikes to the small chorus off-stage?)

Company director David Gockley’s translation/adaptation — let’s call it Englishing — works very well with the music, and it is entertaining, vernacular, but does not call attention to itself… too much. As credited in the program, Gockley created the translation in collaboration with the conductor, which must have been another factor in working well as a singing translation.

Probably not in my lifetime, but sometime in the future, there will be a Magic Flute without all the inane dialogue – in any language – offering instead a 90-minute great Mozart opera. 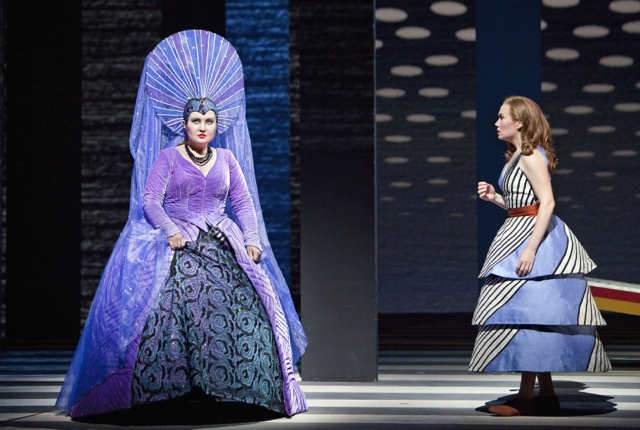 Albina Shagimuratova (The Queen of the Night) and Heidi Stober (Pamina). Photo by Cory Weaver.