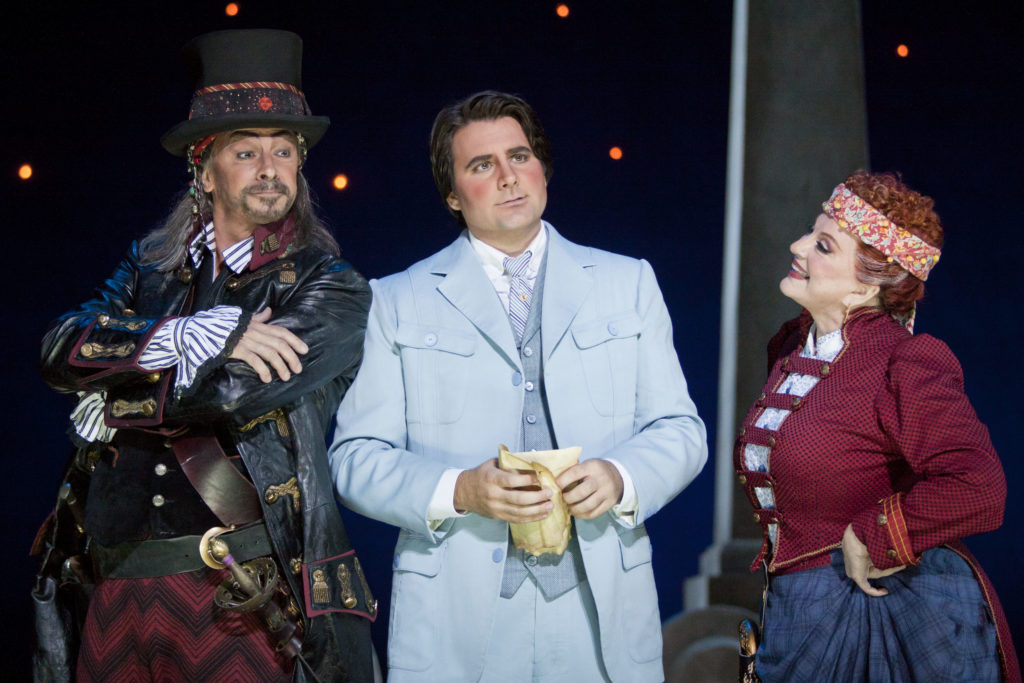 “Go, ye heroes, go to glory,
Though you die in combat gory,
Ye shall live in song and story.
Go to immortality!
Go to death, and go to slaughter;
Die, and every Cornish daughter
With her tears your grave shall water.
Go, ye heroes, go and die!”

Darkness is not something one readily associates with the English language operettas of W.S. Gilbert and Arthur Sullivan. But the satiric target here is clearly the romanticization of what happens in combat — with the usually unspoken reality of slaughter and gore suddenly bursting up from the subconscious in martial music and song. Contextualized, the G&S soldiers are only policemen, but the meaning is still there.

The sentiments are those of Major-General Stanley’s daughter, Mabel, and they are echoed by a bevy of innocent English maidens, Mabel’s sisters. A feminist critic might note that women are also targeted here as naively imagining that war is a fine and heroic thing. The policemen hearing this know “these intentions are well meant” but are not “calculated to cheer.”

Modern audiences sometimes miss just how deeply Gilbert’s lyrics cut at the time The Pirates of Penzance premiered — astonishingly enough — in New York City in 1879. It played there for over three months before opening in London in 1880. “The Slave of Duty” is the work’s subtitle, and it is precisely the uncritical acceptance of duty, whether it be to a band of pirates or Queen Victoria, that is the object of hilarious satire. The G&S world is famously topsy-turvy and so much fun that it’s easy to miss what’s serious about it all. Even the title is silly. Pirates in Penzance indeed! A stretch of coastal Cornwall once a tame and touristy resort! 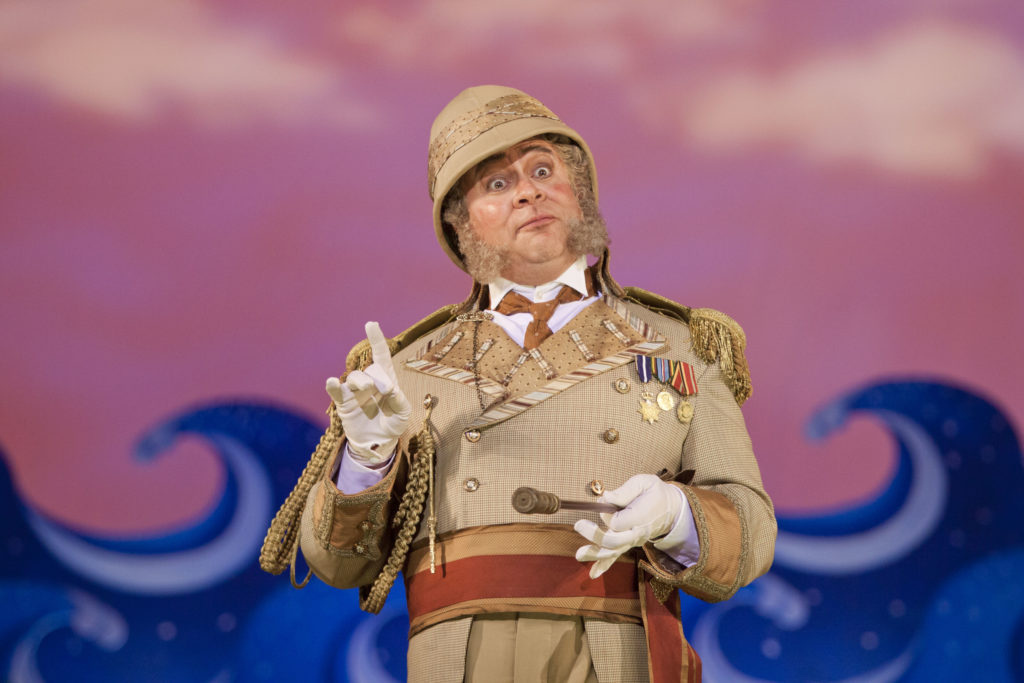 San Diego Opera’s production of “Pirates” which opened a four-performance run Saturday night, is luxury G&S. None of the famous D’Oyly Carte Opera Company’s venerable recordings can boast finer orchestral playing than can be heard with the San Diego Symphony under the direction of Evan Rogister. The sound is fleet and elegant with wonderful attention to detail. “Pirates” is so often played by amateur and semi-professional troupes who cannot afford to put together an ensemble like this one. I directed the show in my senior year of college, and, despite the ample resources and talents of the Music Department, all we had was an upright piano.

SDO’s “Pirates” also enjoys the inspired and lively choreographic direction of Seán Curran. Many people will no doubt object that it is just too much, too much schtick and stage busy-ness. Others will find it, as I did, a great deal of fun. I confess I aimed for something of this kinetic kind with my college “Pirates”. Since then I have seen drier G&S shows which seem to have claim to an image of British mannerly reserve and restraint. I prefer the kind of energy one sees on Broadway or in Curran’s approach to “Pirates”.

The roster of singers is exceptionally good. With Wagnerian bass-baritone Greer Grimsley as the Pirate King, we have truly luxury casting. His comic flair is all the funnier when you think of Grimsley’s Wotan. It is, it is indeed a glorious thing to have this Pirate King.

Of course it is young Frederic’s ridiculous allegiance to this king and his band that keeps the story moving, and tenor Mackenzie Whitney fulfills this duty vocally and with a display of comic panache. Frederic’s nursery maid, now a Piratical Maid of All-Work (mezzo-soprano Luretta Bybee) had mistaken her orders to apprentice the young boy to a pilot (of a ship), but being hard of hearing, apprenticed him instead to a “pirate”. Audiences today can be confused by this, especially in that Gilbert finds so many ways to pronounce both “pie-rate” and “pie-lot” — and by the fact Americans do not usually call a ship’s captain a “pilot.” In any event, Bybee deftly managed the confusion in all departments, vocally and dramatically. 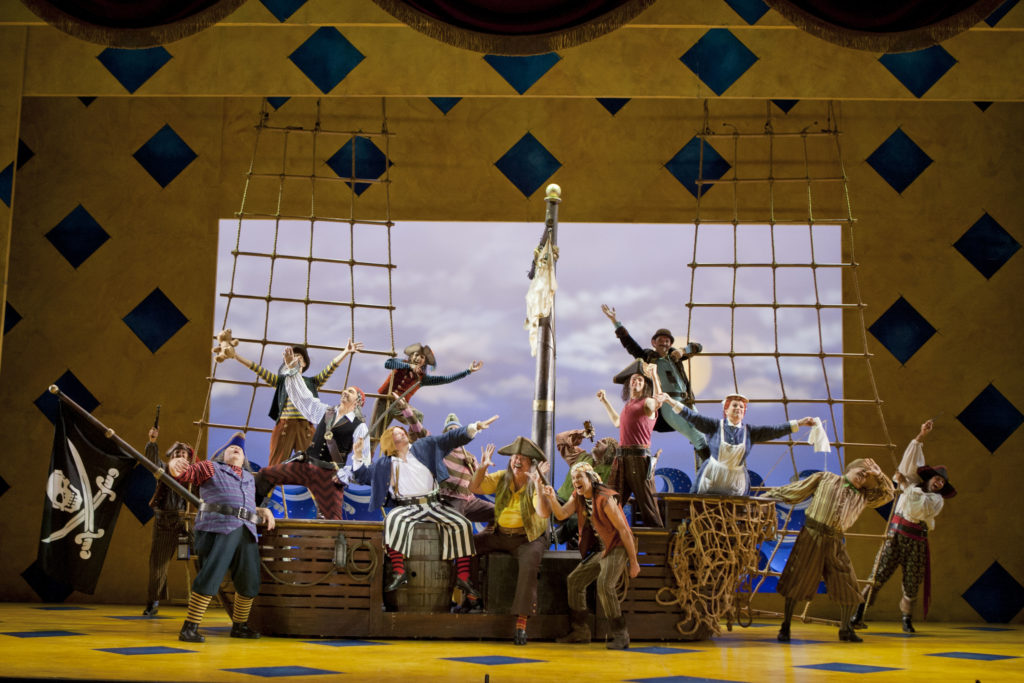 Whitney’s lyricism managed to bring real pathos to the show’s several moments of authentic sentiment, and he was quite fine in his duets with Mabel (soprano Maureen McKay), Frederic’s beloved. McKay displayed a lovely lyric voice and she skillfully executed the parodistic moments of coloratura which lampoon moments in Donizetti’s operas or in other works that were popular at the time.

Although he is not an orphan boy, a claim Major-General Stanley makes to escape execution by the tender hearted pirates (all English gentlemen who have gone wrong), he is an amusingly sympathetic character nonetheless — wonderfully performed by bass-baritone Patrick Carfizzi who articulated the famous patter song (“I am the very model of a modern major general”) at an astounding velocity that increased remarkably in a reprise. This character is probably the one most people first think of when they hear the title, The Pirates of Penzance.

The constabulary contingent was pricelessly droll, in part because of their very funny choreographed maneuvers, but also due to their marvelous Sergeant of Police,  baritone Michael Sokol. 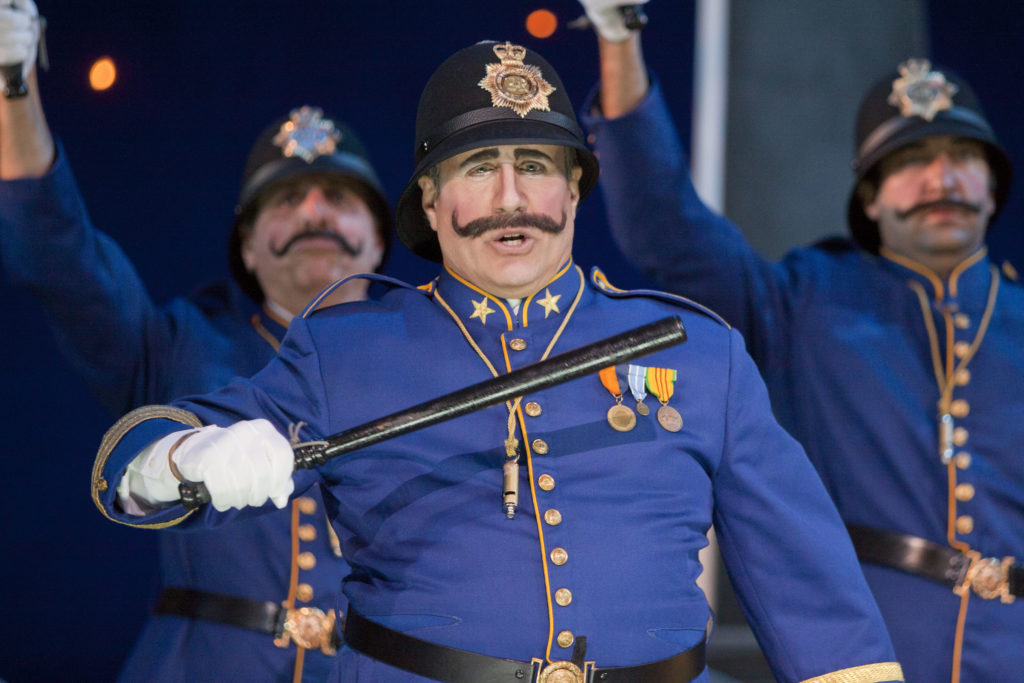 Baritone Michael Sokol is the Sergeant of Police in San Diego Opera’s THE PIRATES OF PENZANCE. October, 2017. Photo by J. Katarzyna Woronowicz Johnson.

When the D’Oyly Carte appeared in Civic Theatre ages ago in I forget just what, you could not understand a single word that was sung thanks to the poor acoustics in that barn. The SDO addresses the problem, not with microphones but with supertitles. This is not an ideal solution, but at least the audience could make out what the characters were singing. I recall virtually all the lyrics so I could not fairly judge, but when my companion closed his eyes, he often could not discern the words, or so he told me.

The choral work is excellent. The effective and colorful sets are based on the illustrations in a popular childrens book, Pirates Don’t Change Diapers  written by Melinda Long and illustrated by David Shannon. This show is surely a hit for the SDO which needs to build its audiences if we are ever again to hear something more heavyweight such as Verdi’s Il Trovatore instead of lighter G&S fare. 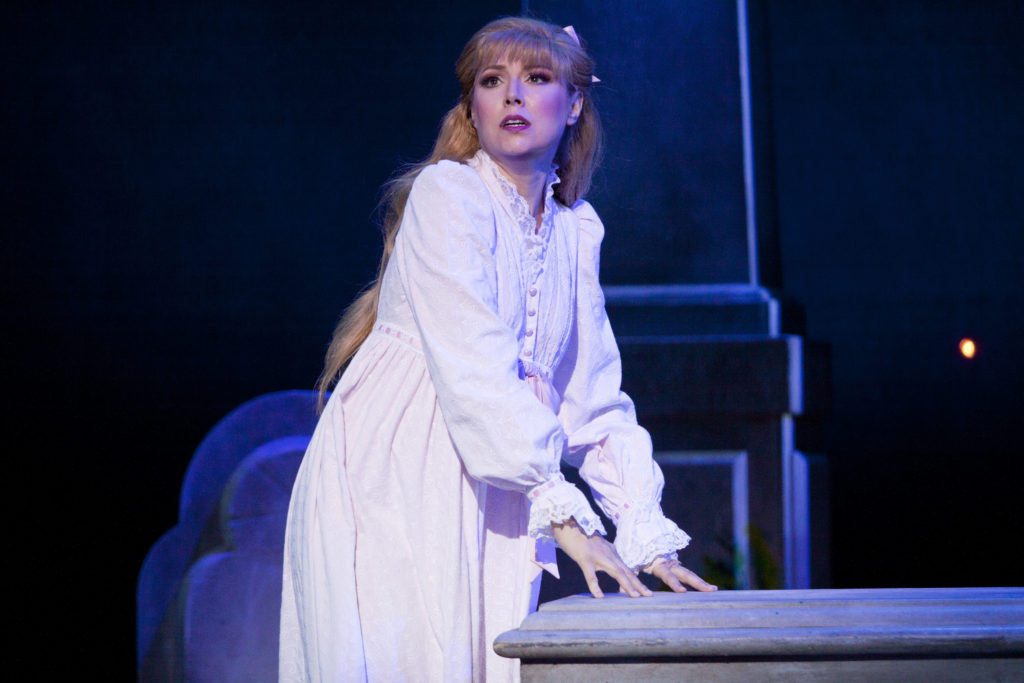 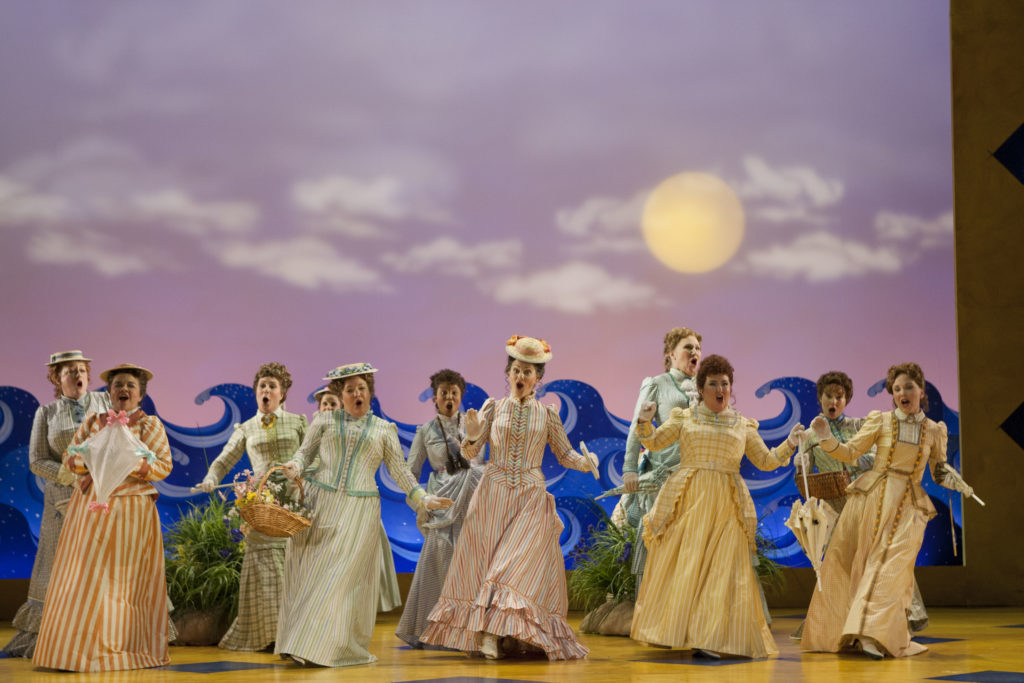