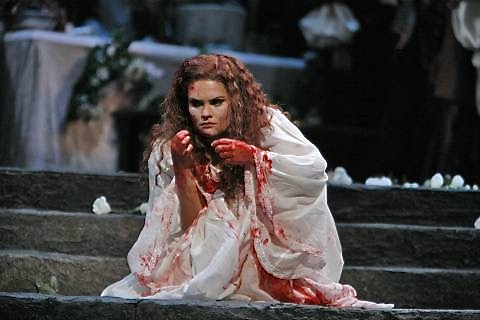 In the annals of hyperbole, little can equal the San Diego Opera hype being foisted upon our innocent little metropolis by The San Diego Union-Tribune. A front-and-back Currents cover-wrap-around photo splash for The Barber of Seville (01/30/06) was accompanied by copy touting the charming and unassuming utilitarian sets as if they had been designed by Franco Zeffirelli for one of the Met’s many stage spectacles. “A lavish delight for the eyes, ears.” “To get a sense of one of the most spectacular scenes in The Barber of Seville, one page wasn’t enough.”

A more recent UT advance (02/17/06) for the Lucia di Lammermoor that opened last night at Civic Theatre, compares the opera’s famous “mad scene” to Hamlet’s “To be or not to be” soliloquy (as spoken by Laurence Olivier), the chariot race from Ben Hur, Gene Kelly’s delivery of the title song in Singin’ in the Rain, the “black swan” pas de deux in Tchaikovsky’s Swan Lake, and the last movement of Beethoven’s Ninth.

Gosh, they left out the Sermon on the Mount from the Gospel of St. Matthew.

Truth is, folks, we have a fine local opera company – but really! Only somebody who has never been inside New York City’s Metropolitan Opera would think the recent Barber of Seville was so spectacularly staged that mere photographs cannot do it justice. And, quite aside from the fact that it’s arguably the sextet from Lucia that’s the opera’s genuine immortal highlight, not the mad scene — are we really to believe that a young South African soprano who reached the finals in the 2003 Wales’ Cardiff Singer of the World Competition can just jump up on stage three years later and knock our socks off in one of the most challenging roles in the entire bel canto repertory? A role that was in the 1950s lifted from obscurity, in a certain sense, by a singer with a very different kind of voice – Maria Callas? And a role that from that time on kept electrifying audiences thanks to the likes of Joan Sutherland and Beverly Sills?

These were true divas who brought down the house with their mad scenes. (I’m not kidding. I know. I saw them. I heard them. I helped bring down the house.) They generated so much excitement you thought you were going to faint. If you think you’re going to experience something like that here – just forget it.

Of course, for Callas the whole opera was a mad scene. When she came on stage during the Met’s Lucia (12/19/56), she was clearly mentally unbalanced to begin with. As she started singing “Regnava nel silenzio” (“At dead of night – in the darkness – a ray of moonlight fell on the fountain – and I heard a moan!’), you knew she was nuts already. And there were no supertitles in those days either.

If you look at her bio, Sutherland (born 1926) took up the role in 1959 – but only after having sung any number of other parts, large and small. Her husband, Richard Bonynge (whom we are fortunate to have here in the SDO pit right now), had groomed her so that she could manage her huge voice with the agility of a light lyric coloratura. The effect was stupendous. In fact, by the early ‘60s, people were calling her La Stupenda. Callas had assumed the mantel of La Divina. This was back when divas were really divas!

(It’s hard to believe, but in 1961 Sutherland sang Lucia with the San Francisco Opera right here at the Fox Theater, now Copley Symphony Hall. In 1974 she returned here to sing the same role with the San Diego Opera with Bonynge as conductor.)

But “comparisons are odious,” as the saying goes. Angela Gilbert is physically beautiful. Very beautiful! She has a beautiful voice. She sings “Regnava nel silenzio” and “Quando rapita” gorgeously. She is wonderful in “Verranno a te sull’aure,” the love duet. Even her mad scene is extremely good. She has some fabulous high notes. She’s also an actress that does athletic stage business that Sills, Sutherland and Callas would never have dared attempt . She phrases wonderfully. She enunciates the text. (You could never understand a word Sutherland sang!) She is extremely musical. But, her voice is smallish. And right now in her career, she doesn’t knock these socks off. It’s the case of extremely talented singer being thrown into one of the biggest bel canto parts of all time but having not quite enough experience behind her. It’s like selling burgers at McDonalds on Monday and becoming a master chef at Le Cirque on Tuesday.

Ian Campbell, the SDO’s general director, has a knack for discovering wonderful voices. Gilbert’s is one of them. I think he made exactly the right choice bringing Gilbert here. “Let’s give her a big part while we can afford her.” One day she may be a great Lucia. But too much, too soon is the curse of the modern opera stage. To mention Gilbert in same breath as Sutherland in her prime is absurd. True, Gilbert admires Sutherland’s recordings and has been studying the role with Bonynge — a man who has long sought to mentor a second Dame Joan, but without success. That kind of vocal lightning truly only strikes once.

Of course, voices do not always mellow like fine red wine. Some of them decay faster than others. Videlicet Richard Leech (Edgardo), once another big SDO “discovery.” Rumor hath it he has become more egotistical, temperamental and disagreeable than Kathleen Battle. I interviewed Leech once back in the not-so-far-off days when he was a golden boy with a golden lyric voice. I found him charming. In those days I’d go backstage to congratulate him. But that lovely lyric tenor sound is going, going, gone. Still, he’s a determined pro, and while his vibrato might be rendered graphically as the design for a thrill ride at Magic Mountain – dammit, his intonation is solid and the high notes are right on the money. They’re loud and not pretty, but – by gosh – they’re there. In short, he’s not a joy to listen to anymore, but he’s a still solid performer.

Thank God, however, for the SDO’s elimination of the Wolf’s Crag scene (Act 3, Scene 1) in which Enrico visits Edgardo to challenge him to a duel and tells him that his lover is in bed with Arturo. That’s an an awful long stretch for a tenor out of top form.

Jenis looked dashing and commanded the important first scene well with his aria “Cruda funesta smania” and the subsequent cabaletta “La pietade in suo favore.” This is one of opera’s highlights for baritone, and Jenis carried off the rest of the role with equal conviction. Hagen never failed to be an imposing presence, physically and vocally, while Register managed to make his part as the sacrificial bridegroom rather touching. He certainly looked grand in that fantastic Cavalier period costume. Halm, meanwhile, tried her best to make herself noticed in a fairly thankless part. Finally, American tenor Kenneth Morris was good as Normanno, Enrico’s captain of the guard.

Peter J. Hall’s early 17th-century style costumes (owned by the Dallas Opera) are almost worth the price of admission. The Henry Bardon production itself is not much to write home about, but its movable Gothic columns and gloomy romantic backdrops suit the story quite well and are very well lighted by Ron Vodicka. Thanks to chorus master Timothy Todd Simmons, the wedding guests and soldiers and such are really good. Looking for something to make this production seem just a little different than every other Lucia on earth, stage director Andrew Sinclair turns the Act Three wedding into a sort of bacchanalian debauch, but this his only egregious touch. The San Diego Symphony musicians play very well under Bonynge – who can conduct this thing in his sleep by now, which is probably one reason everything sounds just a tad routine.

On the Fox Theatre issue: The San Francisco Opera maintains an astounding Opera Archive section at its website. The search function there is perfectly wonderful. A simple search of the name ”San Diego” brings up all the SFO performances between 1952 and 1964, every single one of which appears to have been presented in the Fox Theatre. If you click in the right place, you get a facsimile of each program. It’s worth a visit just to see the astounding artists that came here to sing in a movie palace. It truly boggles the operatic mind. You will need Adobe Acrobat, however, to view the programs. D.G