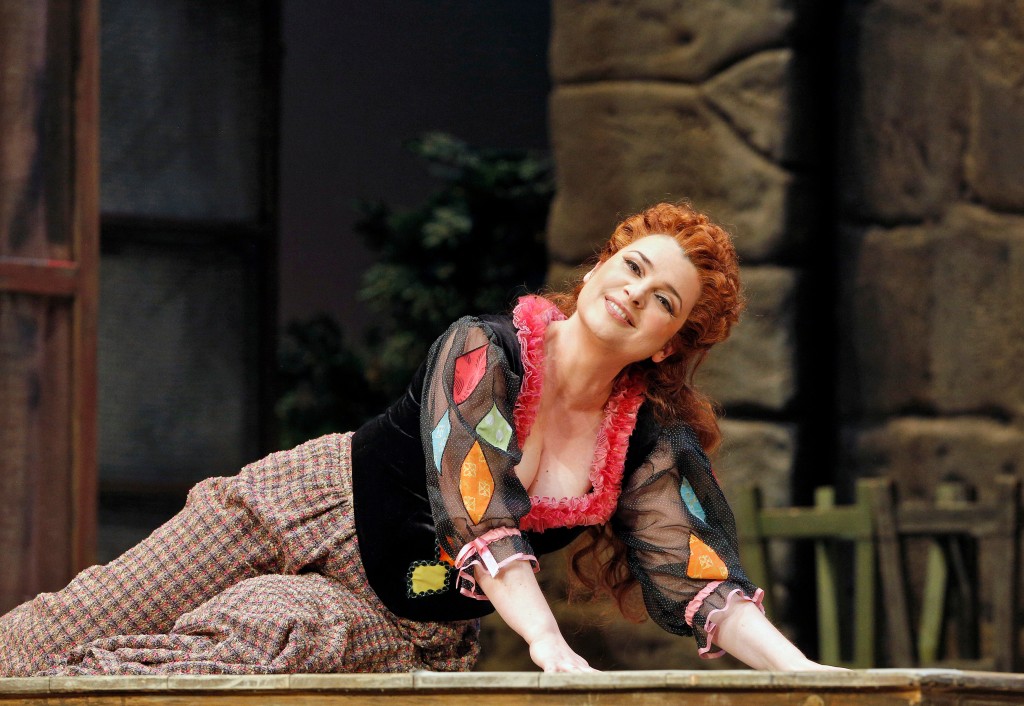 In October of 1969, San Diego Opera creatively paired Leoncavallo’s Pagliacci with Carl Orff’s The Moon: one warhorse and one relatively unknown rarity at that time. If memory serves, both operas were sung in English. When Pagliacci came around again in 1979, it was sung in Italian and more conventionally paired with Mascagni’s Cavalleria Rusticana. This combo was repeated here in 2008 in a production designed by John Coyne and directed by the late Lotfi Mansouri. Tenor José Cura was the Canio and soprano Elizabeth Futral was Nedda.

The so-called Cav and Pag double bill is one of the most famous pairing conventions in the world of opera. The practice in this country seems to date back to New York’s Metropolitan Opera in 1893. Proposing a new marriage that couples Pagliacci with another short opera is actually something of a parlor game for opera aficionados.

It was, therefore, with some initial horror and surprise that seasoned opera goers contemplated hearing Pagliacci all by its lonesome self when the Los Angeles Opera presented it back in 1997. People felt short-changed in advance. The offering seemed too stingy for a satisfying evening; however, this dazzling production (also seen in Washington, DC) was an over-the-top extravaganza designed by Franco Zeffirelli and starred Plácido Domingo, still in his prime, as Canio. It was so big nothing could top or follow it. 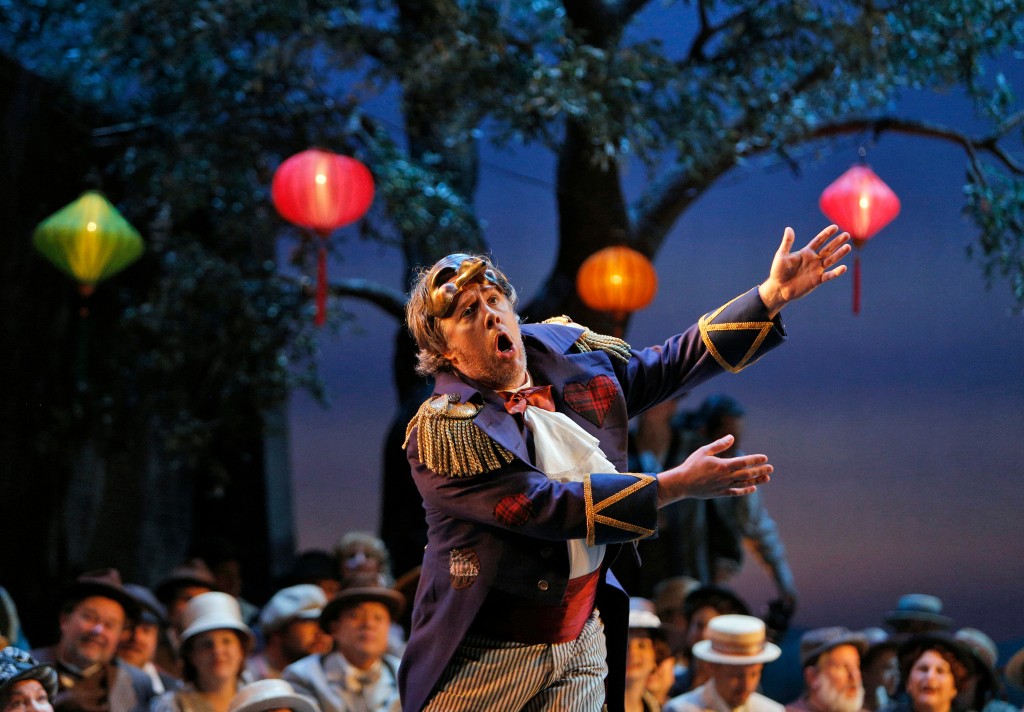 From a showbiz standpoint, one problem with San Diego Opera’s current production of Pagliacci, the 2014 season opener which occurred last night (Saturday, January 25), is that John Coyne’s production, repeating its 2008 appearance here in Civic Theater, was designed to accompany Cavalleria Rusticana, and on its own, the meager set is a rather dull sight to contemplate for a full evening — even if that evening is only 78 minutes long. Reading from the left we see a token bit of a Calabrian village, then what appears to be an olive tree, then some rolling green fields at the back, and finally a wooden platform backed by the fragment of a wall or perhaps an aqueduct. It’s about as far from Zeffirelli as one can get. It is also at odds with the sort of innovative stage design which, for good or for ill, is sweeping the opera world these days. Regietheater often offends or outrages audiences, but it can also be rather wonderful. Sophisticated audiences have come to expect something other than musty literalist (or, as in this case, quasi-literalist) productions. In fact, Zeffirelli’s work itself is now out of fashion and the Met seems to be junking some of his most elaborate and beautiful creations.

To be charitable, this production, for all its lack of glitz and originality, is perfectly serviceable, and an imaginative stage director in partnership with first-rate principals could certainly make it work. Some strong personnel are involved: exciting Franco-American conductor Yves Abel and the excellent San Diego Symphony; the dependably fine San Diego Opera chorus under the direction of Charles F. Prestinari; and a roster of good if not-too-well-known singers, most of whom have at least two parts to play in a manner of speaking. The opera gives us a classic “play within a play”; the singers are both “real” human beings and the stock characters in a traveling group of players — a sort of commedia dell’arte.

Fine American baritone Stephen Powell is actually required to perform three parts: the Prologue who comes before the curtain to sing (quite well, as it happens) about the drama we are about to see; and the hunchback, Tonio, who acts as the servant, Taddeo, in the comedy performed before the Calabrian villagers. Big-voiced American tenor Frank Porretta plays both Canio and the clown, Pagliaccio. In “real life,” Canio’s wife, Nedda (who plays Columbina in the commedia) is betraying Canio with her lover Silvio, whilst all the time staving off advances from the lecherous and jealously vengeful Tonio. Canio is the “Caruso” part, for those who do not know this already, and he sings the opera’s most famous number, “Vesti la giubba” (“Put on the costume” but colloquilally known as “Laugh, clown, laugh.)”

On opening night, Roumanian soprano Adina Nitescu sang Nedda in a somewhat heavy, squally manner that surprised me. From the evidence of You Tube, she seems like an excellent verismo opera type. I am not certain Nedda is a good role for her vocally. It needs a lighter touch, especially for the aria about the birds in Scene Two of the first act.

Singing with a pleasant full-bodied tone, American David Adam Moore was a more than adequate Silvio, Nedda’s real-life lover, and he tried to boast his Barihunk credentials by removing his shirt in a clinch with his innamorata. Likable American tenor Joel Sorensen acquitted himself nicely in the role of Beppe (Arlecchino in the comedy); and this a part that is always larger and more important than one remembers.

Director Andrew Sinclair, however, try as he might, was unable to stir up much genuine excitement on opening night. He does — SPOILER ALERT — give the famous final line, “La commedia è finita!” to Tonio (as was apparently originally intended by the composer), depriving the cuckolded Canio (the clown Pagliaccio) of one of the most memorable features of his part. After killing Silvio and stabbing Nedda to death, Canio then commits suicide, this last bit being something not intended by the composer who, by the way, also wrote the libretto. 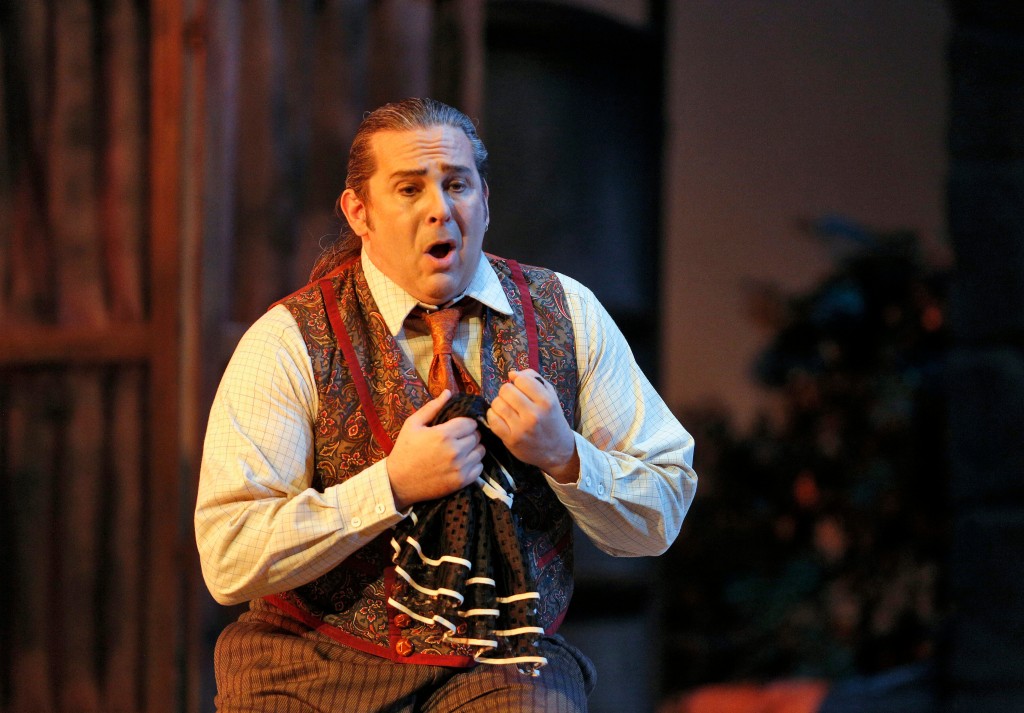 I cannot be certain, but it seemed to me that Porretta was wrestling at times with the vocal part. He often appeared a tad stiff and uncomfortable. He has a strong masculine top, but one often fears for it, and his exaggerated histrionics (much bashing of furniture in the comedy) seemed to be at Sinclair’s orders, perhaps to pump up some excitement lacking in the singing itself. Sinclair also may have nixed a somewhat time-honored routine in which Canio applies his clown makeup during “Vesti la giuba,” but there is no stage direction requiring it that I know of.

Meanwhile, the general wash of lighting in the first scene seemed a little dull and it was sometimes difficult to know where to focus one’s attention amongst the crowds of villagers.

I imagine things will improve by the time of the second performance. Something was missing in this first one, and it’s hard to know exactly what — but I found a hard time connecting with it emotionally.

Readers should feel free to post their own comments below.

*The theatre is located directly across the courtyard from the San Diego Opera offices. 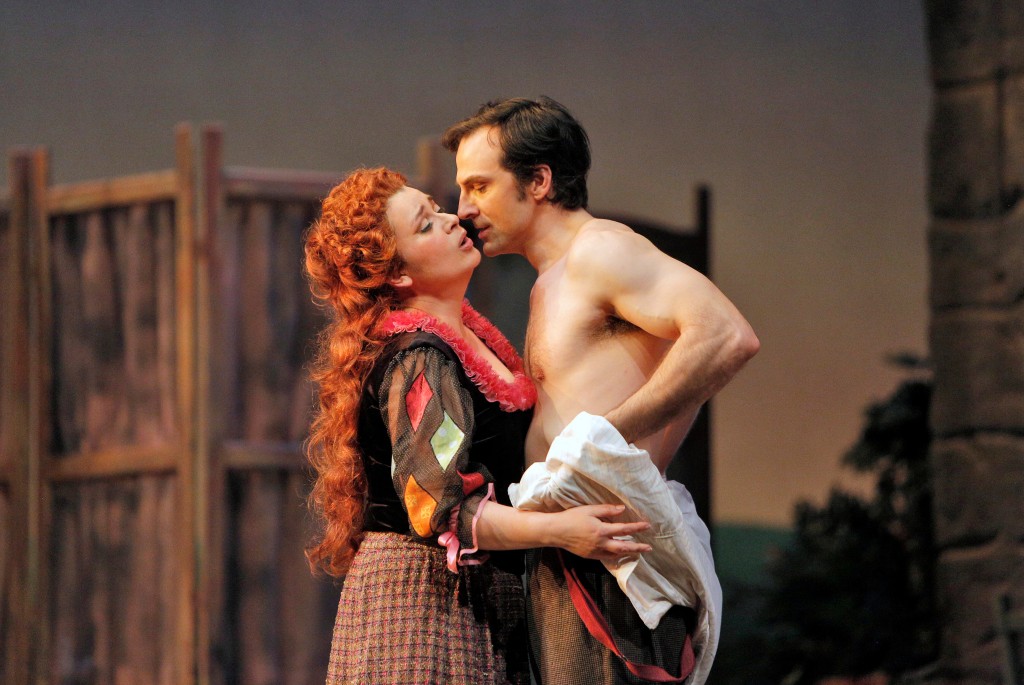