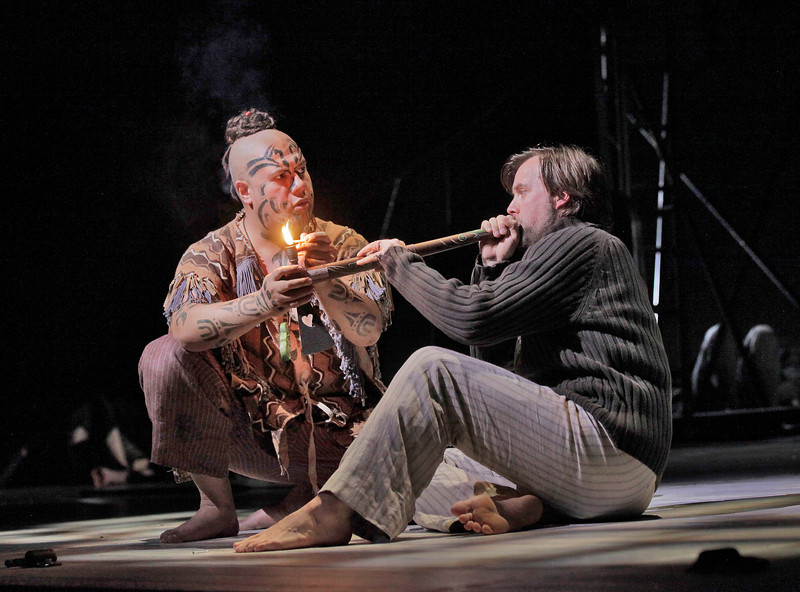 Jake Heggie’s opera “Moby-Dick” has been a hit with audiences since the work was premiered at the Dallas Opera in 2010. In fact, San Diego Opera co-commissioned this work with Dallas, Calgary Opera, the State Opera of South Australia, and, last but far from least, the San Francisco Opera which will stage eight performances of it this coming October. Tenor Ben Heppner is slated to sing Captain Ahab in six of these presentations before tenor Jay Hunter Morris takes over for two.

You are warned San Franciscans! Unless Saint Elmo’s fire descends upon poor Ben’s vocal cords, you will want to purchase tickets for Jay Hunter Morris’s appearances in the role. Last night in the opening performance in San Diego’s Civic Theater, Heppner, wrestling with a voice that flickered like a flame on dying embers, almost sank Heggie’s magically appealing opera. Such a sad spectacle! Here is a man who has sung Tristan, Walter von Stolzing, Lohengrin, and Florestan in some of the most memorably brilliant performances it has been my pleasure to witness. Many years ago I was one of “The Friends of Ben,” a small group of San Francisco Ben Heppner fans that couldn’t hear enough of him. Now I fear it is truly time for him to retire. He cannot come through another vocal crisis (he has a history of them) and hope to continue his career. I don’t think this one night alone is an exception: a 2010 “Lohengrin” in LA was similarly shabby.

If one is unprepared for it, Jake Heggie’s “Moby-Dick” comes as a bit of a surprise musically. You might expect something heavy as a whale and tonally challenging, like Aribert Reimann’s “Lear,” for instance, or Harrison Birtwistle’s “The Minotaur,” an English-language opera which has enjoyed a big success in London recently despite its assault on the eardrums. The whole score of “Moby-Dick,” far from being aggressive and terrifying, possesses a quality of sweet, wistful nostalgia. A kind of nameless grief seems just beneath the surface. All of the music is of one piece, most of it seemingly generated by the slightest of musical motifs. Everything fits and the vocal writing is fluid and unforced — that is to say, Heggie never seems in doubt as what to do with the vocal line. What he writes clearly comes from the heart and nothing ever sounds like desperate doodling in search of a tune, a quality of many contemporary works. The work has an immediate appeal — a fact loved by audiences but probably considered a fault by academics and die-hard supporters of truly new music.

If one is looking for comparisons, a work like Douglas Moore’s “The Ballad of Baby Doe” springs to mind. I think Heggie is a much better composer than Andrew Lloyd Webber, but Heggie shares Webber’s instinct for melodies that stick in the brain. Puccini also used this device. In any case, “Moby-Dick” cannot really be grouped with the tonal operas of Philip Glass and John Adams, either stylistically or in terms of content. Adams and Glass steer away from drawing upon established literary masterpieces, whereas Heggie zeroes in on one. We’ve seen a lot of this in American Opera (“The Great Gatsby,” “A Streetcar Named Desire,” “The Aspern Papers,” “Of Mice and Men,” and “A View from the Bridge” to name but a few). Glass and Adams have, in a sense, revolutionized opera by not going that route. But Heggie and his librettist Gene Scheer DO go there, and with considerable success. 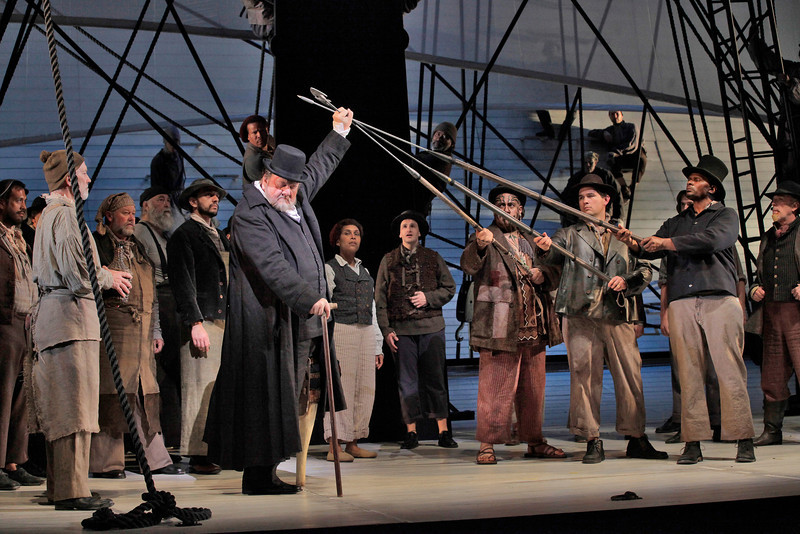 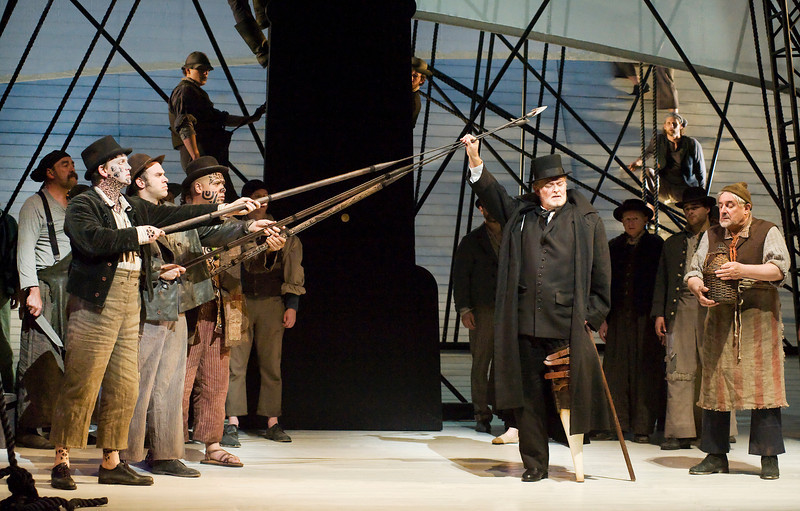 Tenor Jay Hunter Morris (in same scene as shown above) in a photo taken during the 2011 production in Adelaide, Australia. Photografia © 2011.

I recently started rereading “Moby-Dick” in preparation for this opera. I regret to say, I haven’t made it to the end yet, but I recognize how carefully and accurately Scheer and Heggie have selected their materials and condensed them into a performable work of less than three hours’ length. I have to say, however, in this adaptation, Starbuck clearly trumps Ishmael (Greenhorn) as the most interesting character. Herman Melville, of course, uses Ishmael as the narrator (we must beware of equating the fictional Ishmael with Melville himself), so as readers we tend to see Ishmael as the central figure. But in this opera. Starbuck’s defiance of Ahab is the most compelling dramatic action and inspires a gorgeous passage (beautifully sung by Morgan Smith as Starbuck) at the very end of Act One.

Despite the book’s enormous length, the story is very simple. The nearly demented, utterly obsessive Captain Ahab seeks revenge on Moby-Dick, a great white whale that has taken one of his legs away. The voyage of the ship, the Pequod, is doomed and everybody ultimately dies in the pursuit except for one character, Ishmael, who takes his tag line from the Book of Job: “And I only am escaped alone to tell thee.” The book stresses the friendship between Ishmael and the pagan “cannibal” harpooner, Queequeg, whose empathy, altruism and heroism (despite being non-Christian) is demonstrated when he rescues Pip from drowning. The friendship of the two men, especially Ishmael’s racial tolerance, scandalized readers in the 19th century and possibly still shocks.

In reading the novel, by the way, I was surprised to see how the first mate Starbuck instantly leaps into conflict with Ahab. I thought it might take a chapter or two or more, but no. We need more Starbucks in this world. Ahab is the nightmare authority figure, totally obsessed with his own insane agenda. Getting even with a dumb beast that has taken his leg off is more important than the welfare and livelihood of his men and, frankly, the entire ethic of capitalism. Ahab could be any number of world leaders or, at present, political candidates.

The opera is impressive in the way it treats the dynamic relationships between pairs of men. As a friend of mine remarked, you really come to care about them and there are a number of highly effective scenes such as the one in which Ahab confronts the offstage voice of Captain Gardiner (superb baritone, Malcolm Mckenzie) who is looking for his lost son.

With the exception of Heppner, whose vocal troubles and largely unfocused characterization (more enfeebled lame man than a man possessed) mar the whole project, this San Diego Opera “Moby-Dick” is a stunning success in every department. The staging (please see credits below) is extremely well crafted with fascinating projections that, at first, transform a galaxy of stars into sea charts and skeletal CGI blueprints of the Pequod, Ahab’s doomed ship. Ropes, harpoons, small whale boats, and flying shards of wood also make animated appearances. Special effects abound. Men scramble up perilous ladders at the back of the stage to go whaling and to die. Pip (the usually beautiful soprano Talise Trevigne dressed here as an ordinary cabin boy) is swept away in the waves and floats among the billows high above the stage. The whole Pequod seems to come to life, and surprising openings and closings occur in the stage machinery.

So, in short, for those who have never been to an opera before, this is a great show — something to write home about. 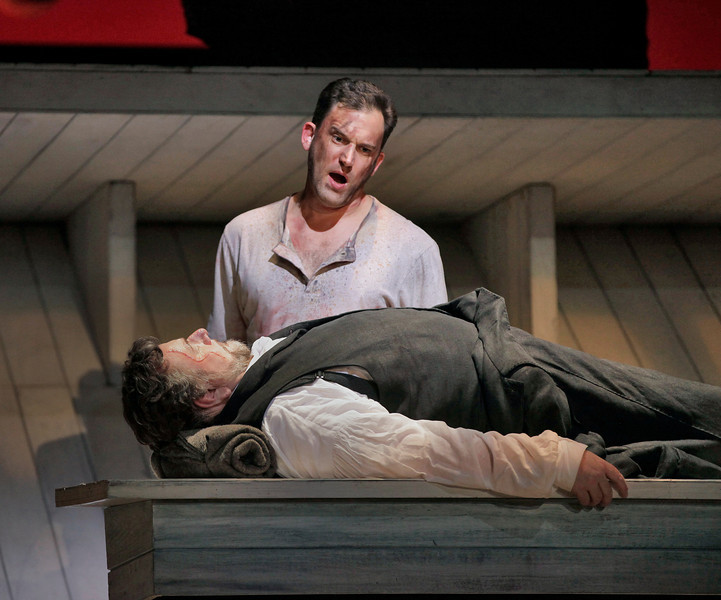 Morgan Smith as Starbuck and Ben Heppner as Ahab. Photo by Ken Howard.

The opera is also extremely well sung and acted. As suggested before, Morgan Smith as Starbuck is a superb foil to Ahab’s lunacy, and he uses his resonant baritone to great effect, lyrically and dramatically. Samoan basso Jonathan Lemalu, seems the perfect choice for Queequeg, a character who must be sympathetic and more than a little off-putting at the same time. Melville’s character is perhaps even more exotic than Scheer’s, but Lemalu wins us easily with his imposing physical and vocal presence. Baritone Robert Orth’s Stubb (Ahab’s second mate) is charmingly delineated and sung, as is Flask (third mate) by tenor Ernest Pinamonti. And when Talise Trevigne is through with Pip, I want to hear her in some standard rep! She has a great voice and talent. And our sole survivor, Greenhorn, played by tenor Jonathan Boyd, impressed with his singing, even if his character seemed less interesting than almost any other.

Karen Keltner, originally assigned to conduct this opera, was replaced on account of illness (according to press releases). So it was Joseph Mechavich to the rescue, and I cannot imagine the work better conducted. The orchestra sounded lush and magnificent from my vantage point in the acoustically superior mezzanine. Leonard Foglia’s stage direction seems in every way excellent and will be, for sometime I imagine, definitive. 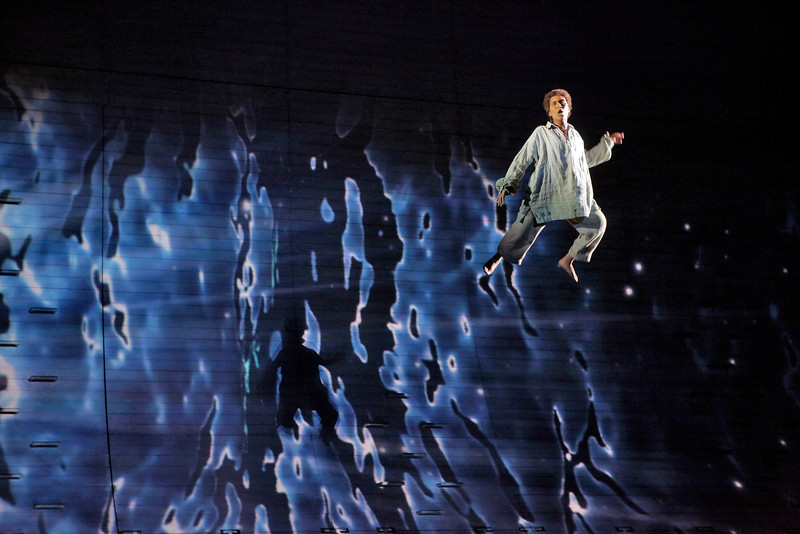