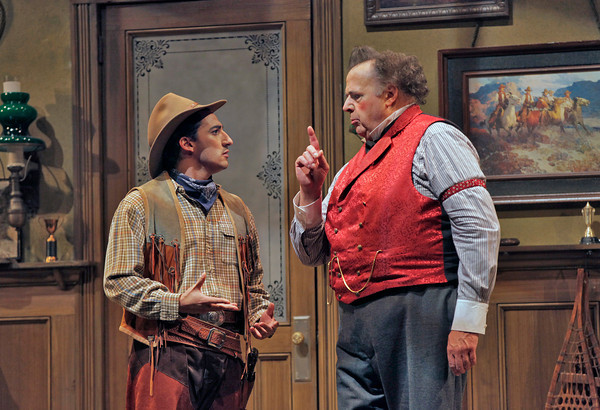 Either I have mellowed (which is very likely) or the David Gately Wild West Don Pasquale is simply a great deal better this time around.

Back in 2002, our local KPBS-FM station carried an ad boasting that this San Diego Opera production had “More laughs than Mel Brooks’ Blazing Saddles,” causing me to complain that two distinct groups had thereby been offended – Mel Brooks fans and bel canto buffs. My point was that Donizetti’s opera buffa contains passages of unsurpassed lyricism that would not be out of place in Donizetti’s most serious works — and that too much horsing around interferes with the singing.

Writing in Opera News I argued, “While the Donizetti/Giovanni Ruffini libretto allows for alternating moments of comedy and serious romance, this production placed in the ‘American West of the 1800’s’ by stage director David Gately and set designer Tony Fanning, became an exercise in non-stop hilarity, with nobody on stage or in the pit pausing to smell the cactus flowers. Comic schtick of every conceivable kind seemed to be going on in both the foreground and background of virtually every scene.”

In short, I thought back then that the intended laugh riot ruined the music. Tenor Matthew Polenzani was the cowboy hero, Ernesto; and soprano Ying Huang was Norina, Ernesto’s mischievous inamorata who ultimately tricks her way out of a forced marriage to a foolish man much too old for her, the eponymous title character of the opera. Comic basso Bruno Praticò sang Pasquale, in this production an elderly Wild West hotel owner, and baritone Christopher Schaldenbrand was his friend, Dr. Malatesta (to whom, as I noted, “Donizetti assigns much of the score’s most beautiful material.”)

But after several years of much more egregious damage dealt to Donizetti worldwide by “directors’ theater” productions, this Gately romp seems relatively innocuous, even cozy and charming. It’s total kitsch, of course, but after all, we do live in that corner of the US where the great film director John Ford created a celluloid Mythic West for all the world to see. So, the 19th-century Roman locale becomes 19th-century northern Arizona or southern Utah. We see Don Pasquale’s “hotel lobby” and “office,” a room in “Norina’s ranch,” and, of course, “Miss Kitty’s” cathouse. A cyclorama of northern Arizona’s Monument Valley dominates the background. Ernesto might as well be John Wayne. Miss Kitty, I assume, is a reference to Gunsmoke, though that Miss Kitty was a saloon owner, not a madam, if I recall correctly. Never mind that Monument Valley is a Navajo Nation Reservation and even was one way back when Ford was making it a Western American icon.

And so to this current revival: I have been a big fan of soprano Danielle de Niese ever since I first encountered her in some Rameau and Handel DVDs. She is utterly charming on stage, and her voice has darkened recently, becoming fuller and more mature. She made a superb Norina, that mischievous imposter, never for a moment having drawn breath in a convent; nonetheless, she had great fun pretending to be the ingenuous innocent thing Pasquale believes her to be. Her arias were fine, and she excelled in her duet with her leading man. 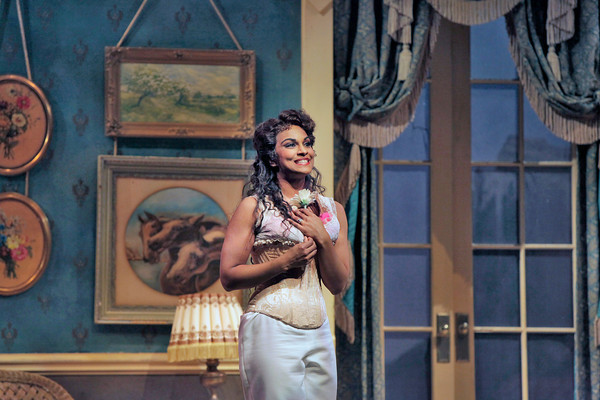 Tenor Charles Castronovo, one of a vast new army of vocally gifted male opera singers who also seem buff and ready to bare it all on stage, sang gorgeously all evening. A beautiful solo trumpet prelude preceded his Act II aria “Cerchero lontana terra,” which he delivered with confident aplomb even from the depths of a bubble bath into which his naughty companions coyly dropped toy boats. He also excelled in the garden serenade of Act III, “Com’ è gentil,” with a sleepy Mexican band clowning in the background.

Bass-baritone John del Carlo, whom I heard only very recently live at the Met (and in HD video transmissions) in this role, really cannot be equaled for comic timing, and I think he brings just the right amount of pathos to the role. After all, the plot places him in a rather cruel situation. The story is a time honored one that ridicules the entire notion of an elderly man taking a youthful wife — or of even thinking about doing so. It’s a tired ageist concept, I fear. Del Carlo, by playing the part as a credible human being, lends dimension to a shallow joke.

Contributing to all the headaches (the name Dr. Malatesta seems to suggest an onslaught of migraines) was baritone Jeff Mattsey who impressed immediately with his Act One “Bella siccome un’ angelo,” even if the tone spread a little. He became much stronger as the evening progressed. Meanwhile, conductor Marco Guidarini made sure that the San Diego Symphony played stylishly. He clearly has an affinity for the music of Donizetti — a composer, by the way, who wrote many excellent operas that never seem to be played anymore anywhere that I am aware of. I have LP shelves full of works I never expect to hear live!
—-
Why this review is late: On opening night, I returned from the Don Pasquale saying “it just may turn out to be the biggest success of the season — with apologies to the Great White Whale! It has a superb cast, is beautifully conducted, and the John Ford production concept (with a view of Monument Valley in the distance) is a winner with the audience. Unfortunately, I have to hit the road at the crack of dawn to take a party of Long Beach Opera fans up the coast for a matinee double bill of Poulenc’s The Breasts of Tiresias and Martinu’s Tears of a Knife. Plans for very early rising complicated by the “spring-forward” time change make it difficult to write about anything sensibly at the moment. But I had to take the time to say the evening was a total pleasure.” 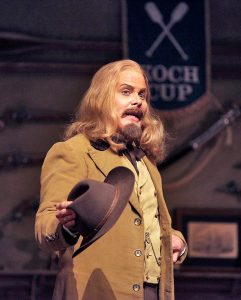 For more info on tickets