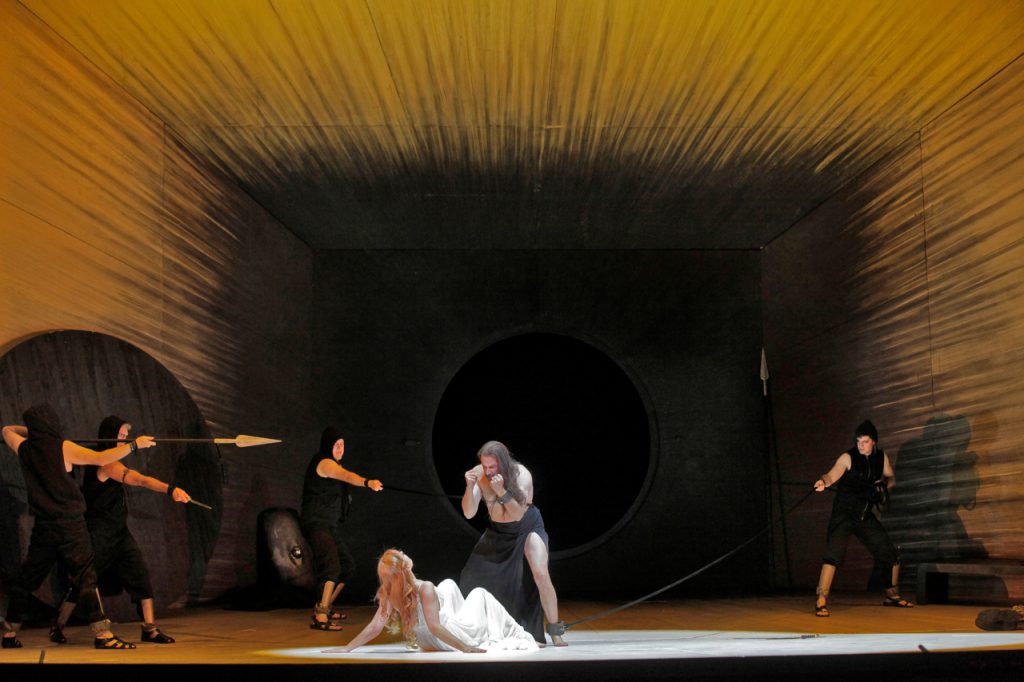 Then, of course, the horrific truth of the situation crashes in musically as Heriod cries, “Man töte dieses Wieb!” (“Kill that woman!”), and, in the original stage directions, “The soldiers rush forward and crush Salome beneath their shields,” something that does not happen, incidentally, in the San Diego Opera production that opened the new 2012 season in Civic Theater Saturday night.

Strauss, of course, was taking his text from the Oscar Wilde play, originally written in French and translated into English by Wilde’s inamorato, Lord Alfred Douglas. Douglas writes that very same stage direction with the flowery overstatement that characterizes Wilde’s deliciously decadent drama: “The soldiers rush forward and crush beneath their shields, Salome, daughter of Herodias, Princess of Judaea. CURTAIN.” These things considered, the SDO’s final tableau, as concocted by stage director Seàn Curran, is an enormous disappointment. There is nothing in it to match the violent crashes of music that end the opera. 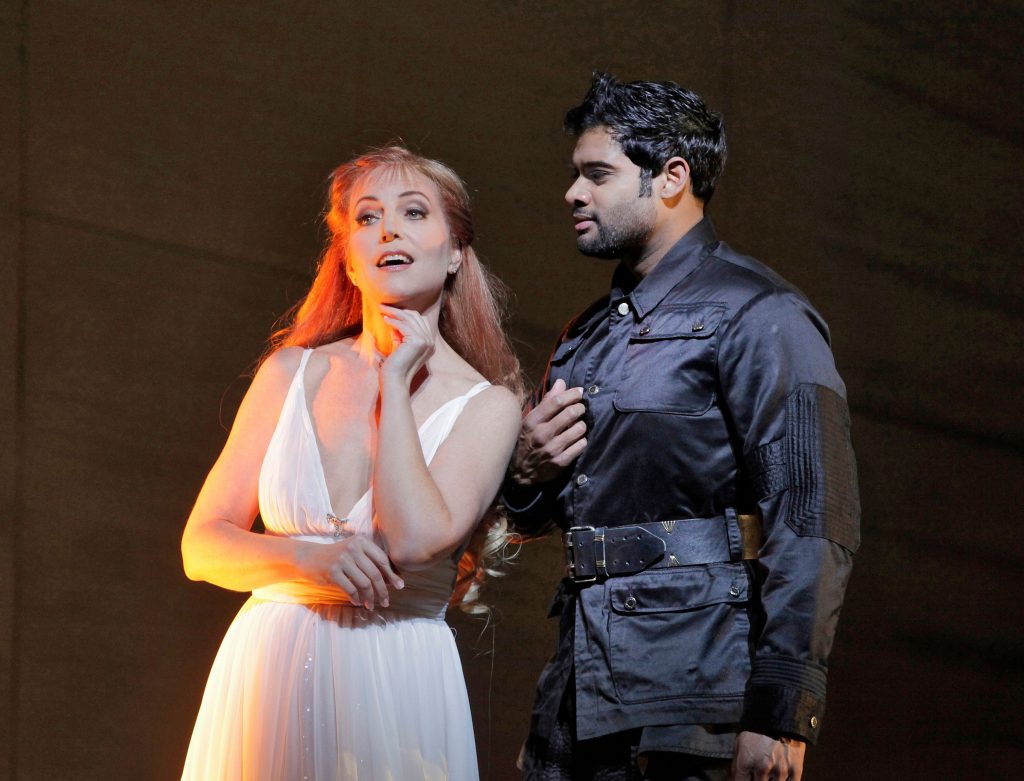 On the other hand, this is an opera that defies staging in several departments. The heroine needs to be a soprano who looks and sounds like a young girl but who has the lungs and stamina of a Valkyrie. She also has to be able to negotiate one of Strauss’s really wonderful bad ideas, the long so-called Dance of the Seven Veils. This is one awful number for a soprano to pull off, and I, quite frankly, have never seen a stage performance in which the physical dancing provides an adequate component to what’s going on in the lavishly scored, sensual, and ultimately frenzied music. Usually we get lots of careful prowling around, most of it both campy and embarrassing, and recent trends seem to demand that we see some bare tits. Several years ago, soprano Maria Ewing bared it all (and no body stocking, either) in Los Angeles. Now every diva wants to get in on the striptease act, or so I am informed by a reliable source who claims it’s the singers themselves, not necessarily the directors, who want Salome to appear naked. And we all, of course, are shocked. Shocked! Gracious me Maud!

Well, Strauss was trying very, very hard to shock his audiences back in 1905. How could he anticipate a world in which his opera no longer seems shocking but like the work of a little boy trying to gross you out with a box full of spiders? What makes it still tolerable, of course, is an utterly brilliant score, and one of the really important ones written in the early 20th century. 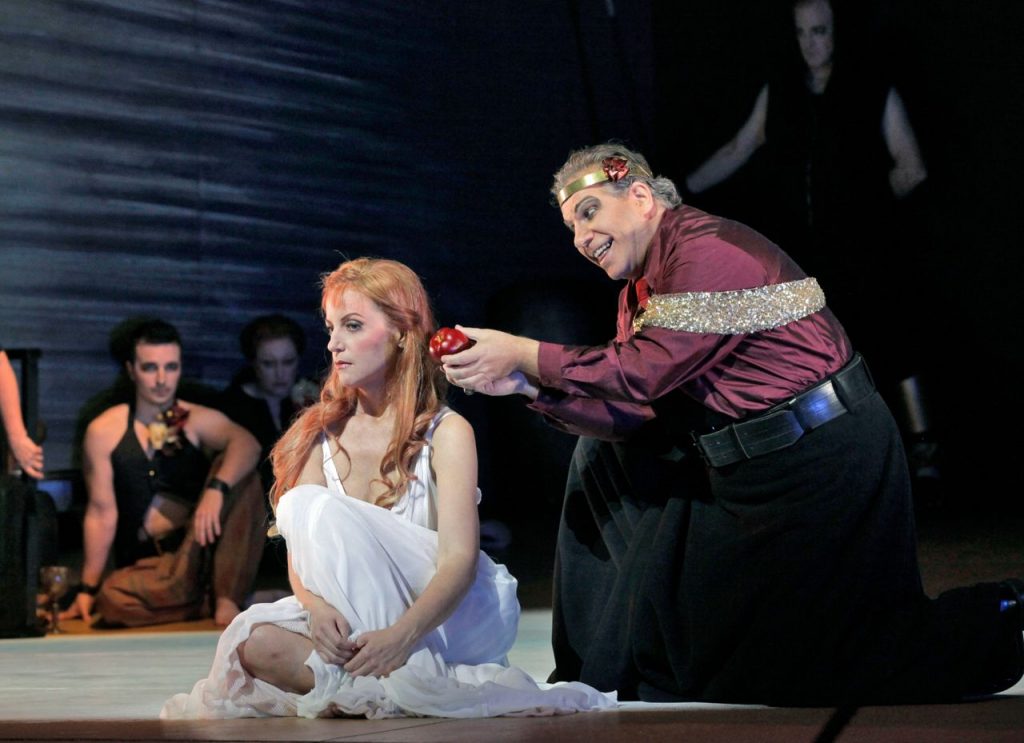 The current San Diego production is worth seeing for several reasons, although I have my own extremely subjective reasons for not liking several things in it. Soprano Lisa Lindstrom successfully conveys the image of a spoiled young girl who wants her way no matter what and who is swept away by irrational and uncontrollable sensuality, but I had a hard time hearing her throughout her middle and lower range. Only the top came through clearly for me. I also felt Stuart Bedford’s conducting lacked propulsive drive. At least for the first 30 minutes or so on opening night, everything on stage and in the pit appeared to be transpiring in a desultory fashion. And the whole evening was, to these ears, underwhelming orchestrally. Perhaps it sounded more imposing down front or in the upper sections of Civic Theater. No one likes to mention it, but there are sonic dead zones in that auditorium.

The rest of the cast was excellent on opening night. Tenor Allan Glassman made a particularly fine Herod who avoided comic vocal caricature to a refreshing degree. I cannot recall ever having seen Herodias played as a silly floozy, but this approach made sense and the role was very well sung by mezzo-soprano Irina Mishura. (I did not care for Curran’s idea to have Herodias deliver Jochanaan’s head in a cloth bag to Salome, if only because Salome has requested that it be brought out on a silver platter.) Bass-baritone Greer Grimsley, one of my favorite artists no matter what he does, was an incomparable Jochanaan. Sri Lankan tenor Sean Panikkar (someone to watch out for!) was a superb Narraboth, the character who exits early by committing suicide with nobody noticing. We can also be grateful for Suzanna Guzmán as “A Page” and for all the other singers listed below. The quarreling Jews were especially fine, and “props” go to Ian Campbell for not censoring their speech in the supertitles, a PC gesture I have seen elsewhere only recently. 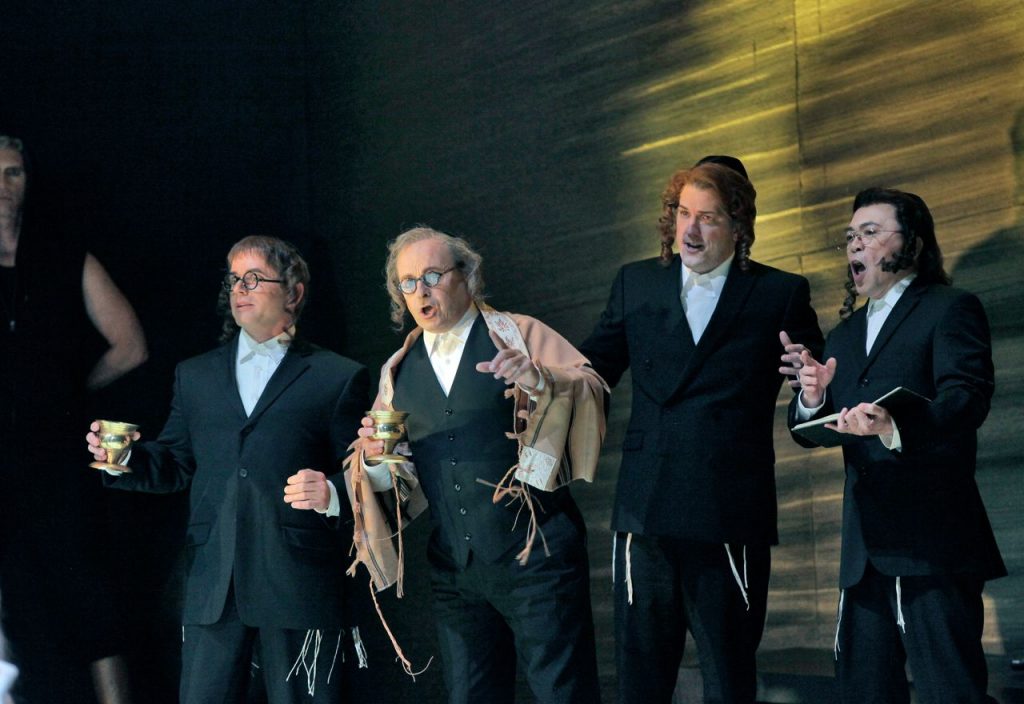 I have enjoyed Bruno Schwengl as a scene and costume designer ever since I first encountered his work at the Wexford Festival in Ireland years ago. His Salome set is a striking modernist creation, a sort of brief tunnel or shaft that culminates at the back in a huge circular vault with a heavy cover and moving iris for an door. This important symbolic moon shape is echoed to the left of the stage by a giant pipe-like entranceway. The vault serves as the “cistern” in which Jochanaan is imprisoned. Wonderful lighting effects and huge shadows are imaginatively manipulated by lighting designer Christopher Maravich.

Curran’s stage direction is largely very effective and his efforts to make the dance look like something other than ridiculous are commendable. I love the fact that out of the blue, as it were, Salome decides to dance for Herod and then comes on with a troupe of trained assistants who provide her with each veil individually. That is to say, she does not start out with seven veils and then remove them. They are delivered in a carefully choreographed sequence, one by one, and our willing suspension of disbelief requires us to ignore that all of this terpsichorean feat could not possibly be spontaneous. It’s a convention of musical theater that we do not question such things.

Jochanaan, before he loses his head, moves about the stage chained (or roped) like an animal. Lindstrom tripped over one of these lines early on but recovered nicely. Despite this, the whole show made a strong and memorable visual impression. I do think, however, that bringing on many of the actors 10 minutes before the show actually starts is NOT a good idea when you are still projecting supertitle advertisements for American Airlines, Facebook, Point Loma Nazarene University, Sycuan Casino and whatnot — while the orchestra is tuning up. Very crass. The ads should go if we are watching the show already! (Did Point Loma provide real Nazarenes I wonder?)

I hate the way all stage directors handle the head business these days. It is a distraction that says, “Look, look how outrageously shocking we are up here.” I wish they would just leave the damn thing on the floor (covered up, preferably) until the kiss. Most prima donnas look absurd instead of horrific. Montserrat Caballé in particular. If you want to be truly horrified, see if you can still locate the You Tube link I found quite by accident several years ago — a live video of Islamic terrorists sawing — sawing! — the head off a living hostage and then holding the thing up to the camera. I was physically ill seeing this and did not sleep for three days. The staging of “Salome” swiftly dropped to the bottom of my list of anything I could ever, ever again accept as entertainment.

But, I still love the music. 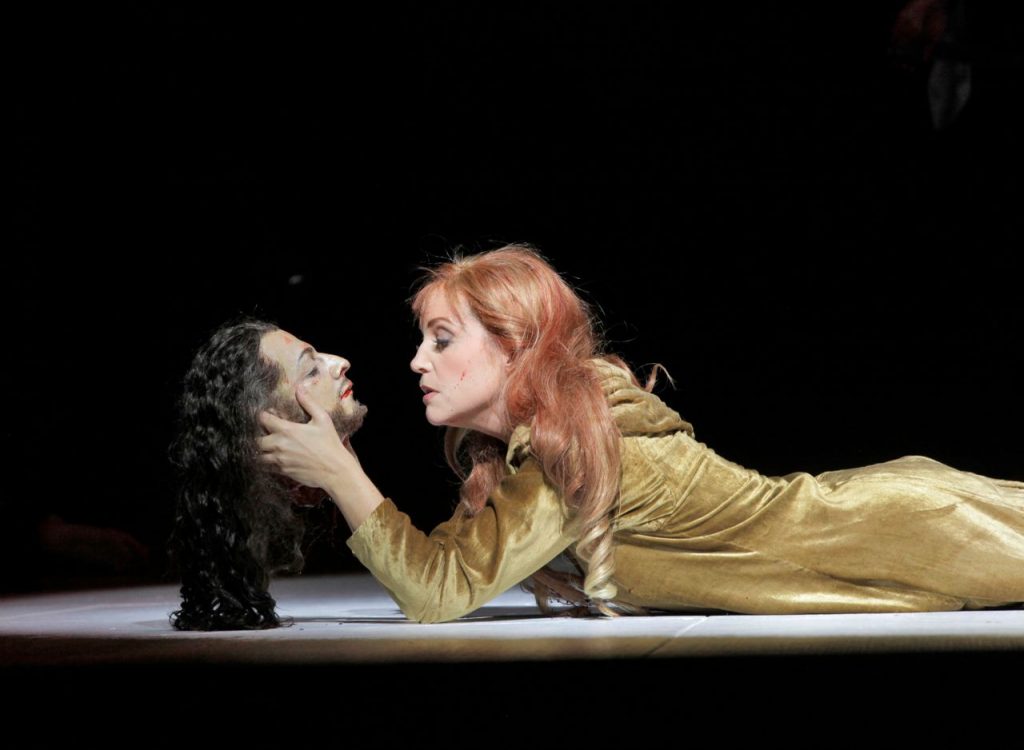 Lindstrom (Salome) and the head of John the Baptist