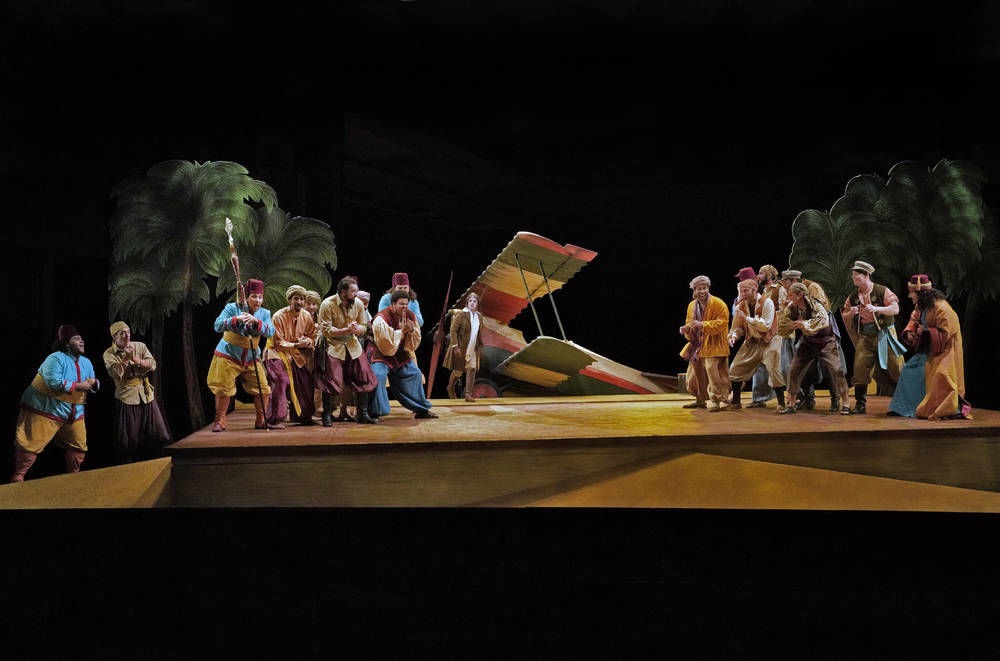 Photo by Ken Howard from a Santa Fe Opera production illustrates the “aviatrix” concept for the opera.

This is the increasingly famous “pop-up book” production currently making the rounds — and it’s utterly charming. Originally designed by Robert Innes Hopkins for the Santa Fe Opera in 2002, the action (conceived by Rossini and his librettist, A. Anelli , as taking place in Algeria circa 1805) is updated to the early 20th century when “aviatrixes” (no longer a politically correct term) such as Amelia Earhart were making names for themselves in the skies. So, the heroine is no longer the survivor of a shipwreck but a feisty aviatrix who knows her way around men and a man’s world. In fact, “aviator” is really the word we need here! The whole theme of the story is the comical, high-spirited revenge of a strong-willed woman over men who think they run everything and treat their wives like possessions.

Santa Fe is a house without overhead flies from which scenery can be lowered, so this production made particular sense at their home venue. But it travels well. What I take to be a hydraulic mechanism opens a storybook at the start of the opera – and out pops the cartoon-ish palace of Mustafa, Bey of Algiers. The costumes (by David C. Woolard) are all out of a fantasy world of children’s book illustrations. Isabella’s three-dimensional airplane is life-sized, but it still looks quite like a toy – and it actually starts out as one in the form of a miniature replica of itself that flies around the audience auditorium and crashes onstage.

Almost everything clicks in this OP version. Conductor John DeMain gets crisp, clean results from the Opera Pacific Orchestra, and stage director Edward Hastings never misses an opportunity to wring the comic possibilities out of a scene. For some tastes (mine, for instance), it’s too much. Rossini not only wrote comic operas but comic music. That’s right: music that is so clever it makes you laugh out loud – as in the “confusion ensemble” (a genre of which Rossini was the master), a septet that ends Act One with dinging, clanging, booming and cra-cra-ing – and which really doesn’t need dancing and prancing around to add to the hilarity. It might be funnier if everybody just stood still!

Overall the cast is excellent – but, to paraphrase an old paradox, some people are more excellent than others

Way back in 1964, San Francisco Opera had two distinct “seasons” at War Memorial Opera House. There was the regular fall season full of world famous soloists, and there was a lower-budget Spring Opera season that featured emerging talents. It was there that I heard the then virtually unknown mezzo-soprano Marilyn Horne as Isabella in L’Italiana in Algeri. To say she was sensational would be an understatement. The audience knew a star was being born and responded with a lengthy and rapturous final ovation.

However deserving she may be as an artist (she’s the OP Diva Guild’s “Diva of the Year”), in last night’s opening of Opera Pacific’s L’Italiana (The Italian Girl in Algiers), young Puerto Rican mezzo Jossie Pérez did not stir up similar excitement. Despite her gorgeous good looks and ingratiating personality, big sparks did not fly. This is a shame, really, because she possesses a lovely voice and has truly mastered the technique Rossini demands.

In fact, in many ways Perez is a superior singer to the much beloved Cecilia Bartoli (who aspirates all her runs and ornaments like a machine gun going off). The main difficulty with Perez – and perhaps the only major problem that faces her – is the sound she makes is small in comparison to many of the power-house mezzos of both past and present. One longs for a plumier sound, heftier chest tones. Bartoli, of course, has been accused of having a small voice as well – although I have found it projects rather well in a large house. In any event, Bartoli now does very much her “own thing,” making recordings and choosing recital venues that appeal to her, so a making big sound does not matter too much to her. Perez has won Met auditions and is already singing at that house. It will be interesting to see what lies in store for her. She’s a charmer and very talented.

I mention the prima donna first because so many opera fans are drawn to L’Italiana primarily by Isabella’s big arias: “Cruda sorte” (“Cruel fate’), sung when she finds herself shipwrecked, or as in this case, plane-crashed on the Algerian shore; and “Pensa all patria,” a patriotic recitative and rondo near the end of the work. Isabella is also an important part of number of duets and ensembles. But the tenor role of Lindoro also has some stunning highlights, particularly “Languire per una bella” which leads to a cabaletta studded with high C’s and B’s. Who better to bring these off than English tenor Barry Banks who truly knows his way around the bel canto repertory. (He will be replaced on one performance by a newcomer, American tenor Nicholas Phan.) Banks is spot-on musically and a very fine performer. I personally am not in love with this voice, but that has nothing to do with his musical or acting skills.

As Mustafá, the preening, domineering, lecherous Bey of Algiers, Richard Bernstein orders everyone around with the authority that comes so naturally to men with big bass voices and charismatic stage presences, but certain ornate Rossini passages appear to make him vibrate all over, from head to toe – a fact that suggests he may not be taking exactly the right vocal approach to the score at times. His chief wife, Elvira, was pleasantly realized by soprano Kristine Winkler; baritone Todd Robinson made the most of his “buffo” part, Taddeo; and bass Todd Robinson was fine as Mustafá’s short-suffering servant, Haly, who is faced with impalement if he doesn’t hustle up an attractive Italian beauty prestissimo! Mezzo-soprano Kristin Rothfuss was excellent a Elvira’s confidante, Zulma.