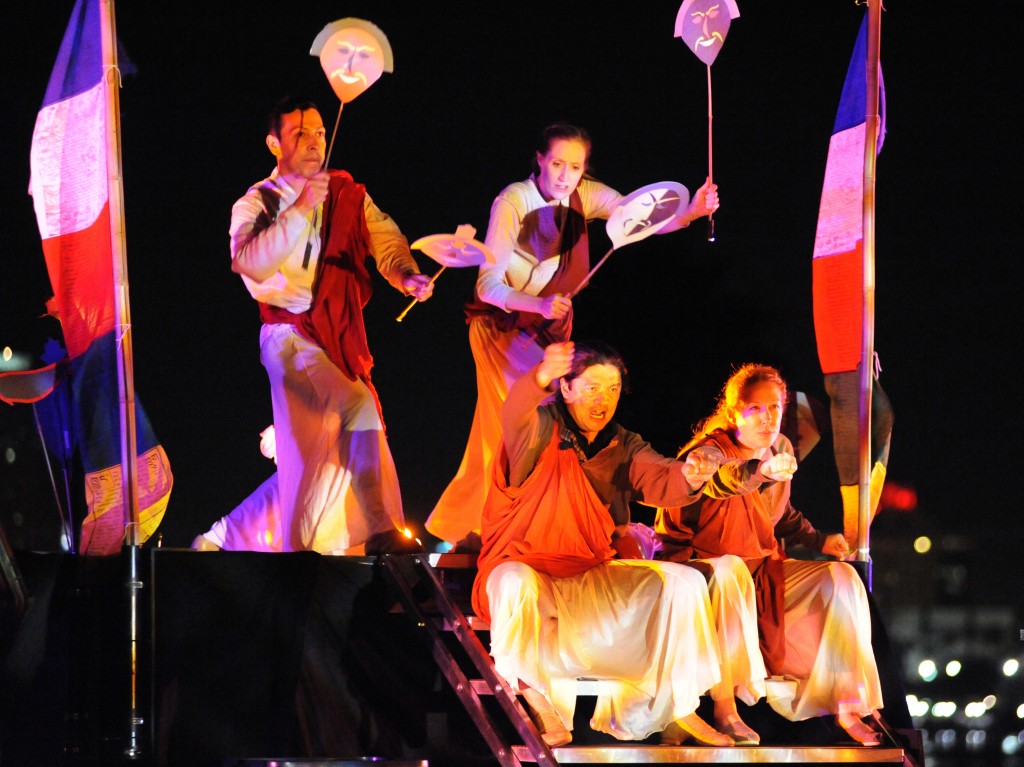 Review of the September 7th performance by David Gregson

Who is this King Gesar fellow anyway? The name may not be familiar to you at first, but once you have heard his story, his life and adventures may evoke innumerable associations with tales of Asian mythology and with the forms of folk art that accompany such tales: shadow plays, puppet dramas, and highly stylized music and dance. With my own eyes I have seen amazing folk epics staged on raised wooden platforms in Sri Lanka, Japan, and Hong Kong. Redemptive heroes perform astounding feats and overcome deadly enemies. And so Gesar, a legendary warrior-king, finds himself in good company. He can assume different forms, and, astride his miraculous horse, he can win any race. He shines like gold in the sun and he is victorious in battle. He is the apotheosis of the human spirit. And by some curious magic, his exploits are now being celebrated — yes, upon a raised wooden platform al fresco — in exotic, far-off Long Beach.

I rarely go to hear a new work — or a work new to me — without some sort of preparation. Back in August of 1997 I knew I would be attending the world premiere of Peter Lieberson’s Ashoka’s Dream at the Santa Fe Opera, and because I had heard very little of the composer’s music at that time, I purchased a copy of his monodrama, King Gesar, a Sony CD release now long out of print. (Some unwrapped and used copies can still be purchased from independent sellers on Amazon, although one should hurry now that the piece is suddenly relevant again and seeing the harbor lights in Long Beach). The recording is notable not only because of the appealing score but because of the participation of pianists Peter Serkin and Emanuel Ax, cellist Yo-Yo Ma, and the composer himself conducting. Omar Ebrahim is the single narrator.

Never one to overlook new possibilities in the score, Long Beach Opera’s artistic director Andreas Mitisek has split this single narrator into two for the work’s current quite literal outing. It is intended to be a “campfire” performance under the allegedly starlit canopy of sky that arcs over Harry Bridges Park, mere steps from the berth of the Queen Mary. And Mitisek’s inspiration pays off in more ways than one. The division of narrative labor proves quite effective in that it lends a very appropriate masculine/feminine yin and yang to the ritualistic account of the life of the legendary Tibetan warrior, King Gesar. And it helps that both narrators, Roberto Perlas Gomez and Danielle Marcelle Bond, are exceptionally fine. One only regrets that Lieberson did not give the narrator very much music to sing, for not only is Gomez a superlative actor, he has a richly textured baritone that we heard too infrequently during last night’s opening performance.

One recurring aspect of the narration, by the way, is that it is sometimes driven by a rapid, staccato rhythm, like an insistent stream of 16th notes. These passages are quite long and very difficult to perform, especially inasmuch as the bars of music are much more complex in their writing than they sound. Working with his colleagues, Gomez stressed verbal intelligibility over the propulsive tat-tat-tat-tat of the kind Ebrahim delivers on the recording. For all I know, this expressive intelligibility violates the composer’s wishes, but it added immeasurably to the success of last night’s performance: it helps to know exactly what is being said. In general, the Mitisek approach achieves a better musical-vocal balance than can be experienced from the Sony CD. If that recording has a fault, it is that the music and the narration compete with another for our attention. They simply do not fully complement one another.

Frankly, I think any and all musical pieces accompanied by a spoken narration present a major problem for the listener. The melodic elements in Lieberson’s score are only fully apparent on a second or third hearing. Initially it is the rhythmic pulse, with the occasional bits of musical-pictorial representation, that one hears. 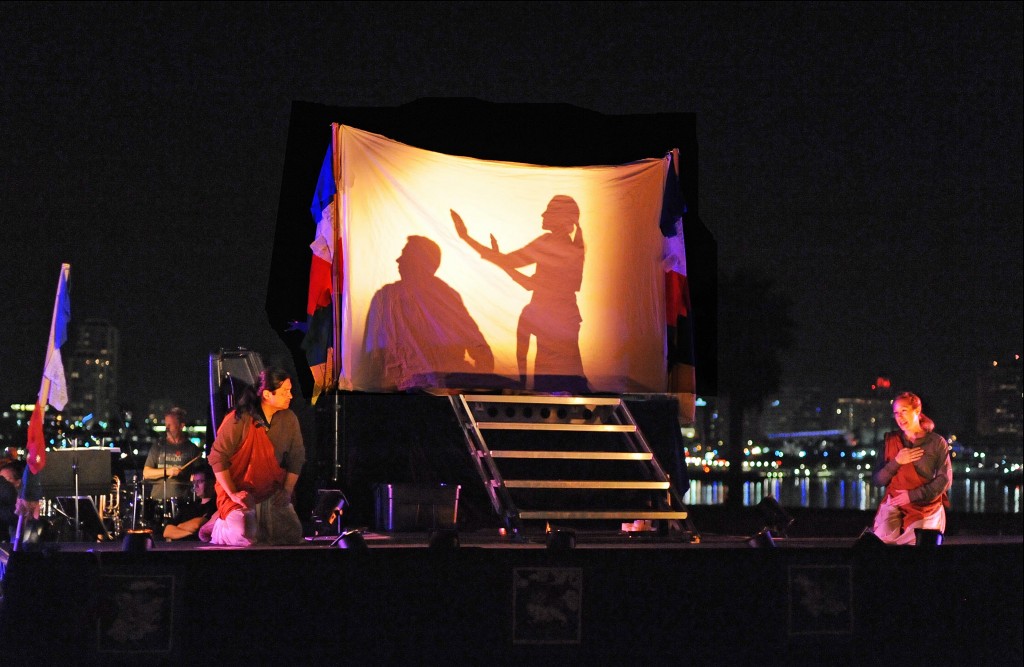 Gomez and Bond, with Gonzalez and Ray in silhouette. Photo by Keith Ian Polakoff.

Curiously, Peter Lieberson has an intriguing genealogy vis-à-vis musical talkathons. His mother, ballerina/actress Vera Zorina, performed the French narration of André Gide’s text to Igor Stravinsky’s “melodrama” Persephone, a famous recording on Columbia Records. Goddard Lieberson, Peter’s father, was the president of Columbia Records at the time of this release (1966) and was a brave backer of Columbia’s many Stravinsky recordings. I fancy I can hear many chords and intervals in King Gesar that can be found in a number of Stravinsky scores. Vera Zorina, by the way, did numerous talkathons, including Arthur Honegger’s Joan of Arc at the Stake, and Lucas Foss’s Parable of Death (now a real obscurity) — all on Columbia Records.

Lieberson’s piece, as a sort of folk art entertainment with a limited number of players, also brings to mind Stravinsky’s A Soldier’s Tale (which has both an interspersed narration and some talkathon passages), and a work like Renard the Fox. In any case, King Gesar is elegantly and boldly scored, with vibrant effects from the brass and woodwinds, and the exciting sonority of two pianos and percussion.

In the photos that accompany this commentary the reader may see the beautiful simplicity of this LBO presentation, and yet the project was a complicated one to bring off. The weekend shoreline revelry of Long Beach does not exactly creep across the waters but arrives with irritating insistency, and other distractions abound such as the noise of circulating helicopters and nearby motoring. (I mention this despite the fact I was not bothered in the least by any of it! I suppose I entered the state of zen concentration jokingly suggested by Mitisek in some opening remarks.) The company had to set up conductor Kristof Van Grysperre’s excellent orchestral ensemble (to whom I give credit below) in a peculiar configuration located near the stage, and miking and loudspeakers were needed. There was a highly constricted performing area. But the dancer narrators, Javier Gonzalez and Kelly Ray, brought exactly the right sense of ritual dignity and fluid expressivity — and none of this seemed to me to be in the least bit pretentious. King Gesar might have been an actual play done in a Sri Lankan jungle village: it had that sense of honest simplicity about it.

The audience sat in folding chairs — or perhaps lounged on the grass. The steamy hot day had become pleasantly cool in the semi-darkness. I found myself totally absorbed.

As a composer, Lieberson deserves more attention these days. It’s a shame that Ashoka’s Dream, like so many of Santa Fe Opera’s original offerings, has faded into virtually total obscurity. I managed to find what I said about it in 1997. I mention this old review mostly because I think Lieberson’s lyrical gifts may be ignored, even by those who go to Long Beach and enjoy King Gesar, a piece with expressively lyrical underpinnings.

“The novelty [this season is] Ashoka’s Dream, a slightly plot-static Buddhist opera by composer Peter Lieberson and librettist Douglas Penick. The consensus among those that liked it at all was that the second act was the best — odd, of course, since this act delineates Ashoka’s inward Buddhist journey, which one would think an unpromising subject for opera, the grand art of extroverts. The act in which the formerly warlike Ashoka “transmutes his anger into gentleness,” however, was good enough to make me reconsider the entire work. Lieberson, much to my surprise (after his King Gesar talkathon on SONY) has a knack for writing beautiful vocal lines. You cannot say that about too many late-20th-century composers. And the performers were truly fabulous, especially Lorraine Hunt, in creamy mezzo-soprano glory as Triraksha, Queen of India. I heard her a few nights later in a program of Brahms songs at St. Francis Auditorium (The Santa Fe Chamber Music Festival), and the audience was enchanted by a voice that seemed to levitate the building.”

Lorraine Hunt met Lieberson during Ashoka’s Dream and then married him. She died much too early in 2006 at age 52, of cancer. And now Peter is gone as well. He died in 2011. Alex Ross pays him a touching tribute.  And there is much information about Lieberson and King Gesar at the Long Beach Opera website.

This LBO offering is worth seeing twice.  It has been a highlight of this summer, at least for me. 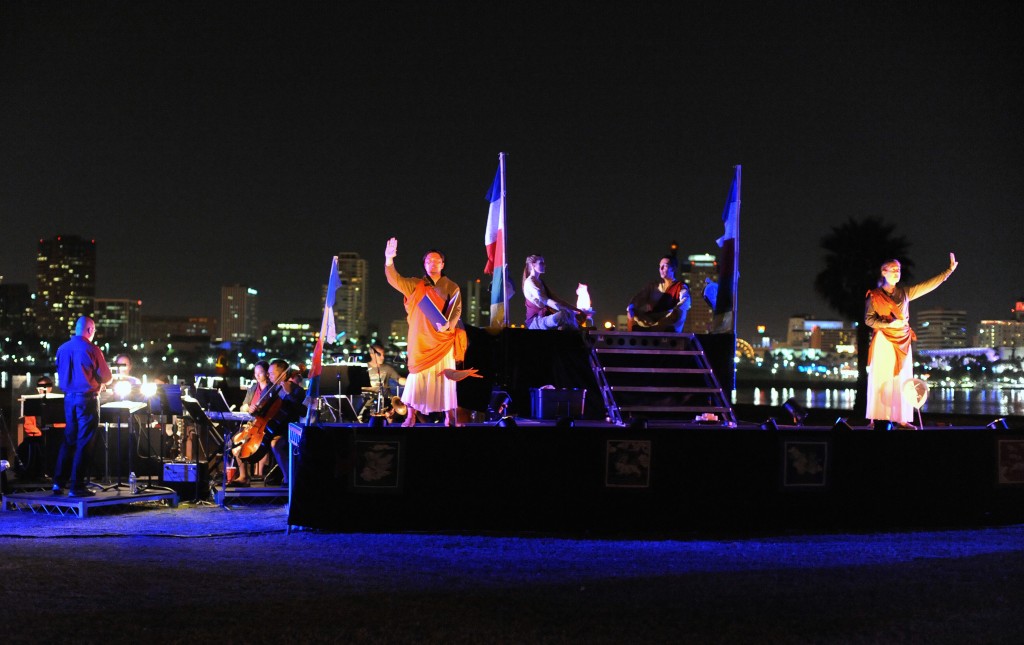 The company with Long Beach harbor and skyline. Photo by Keith Ian Polakoff.