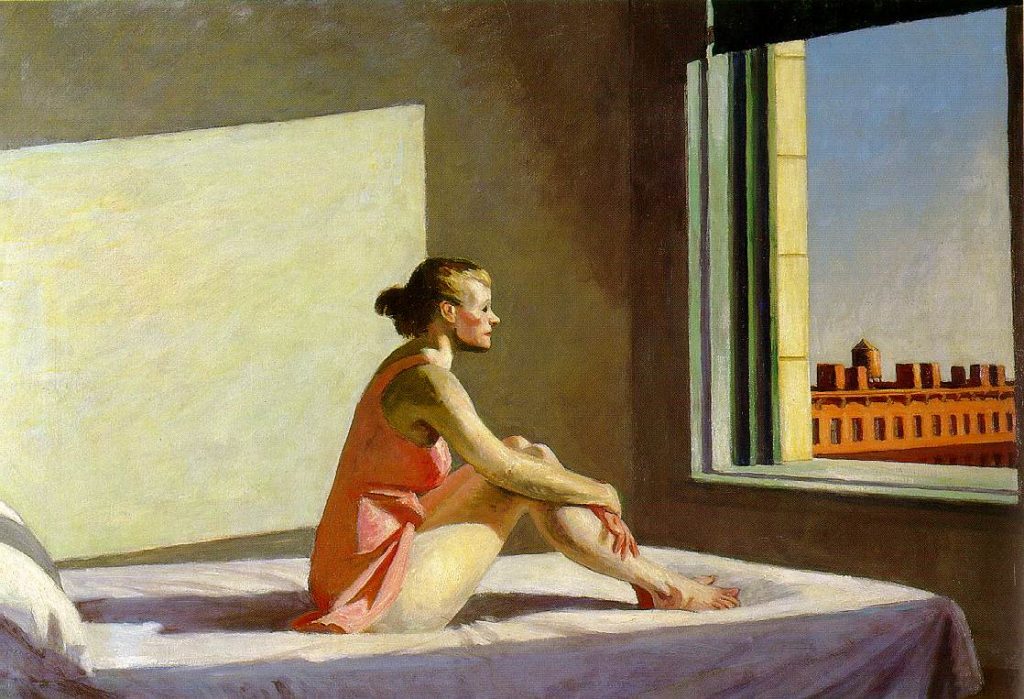 Not intended to be amusing, but nonetheless failing to disarm my sense of
what’s funny, are the little signs taped up around the Knoebel Dance Theater
warning the audience about the hazards of the Long Beach Opera’s world
premiere staging of “Hopper’s Wife”.

In trying to remember exactly what was printed on those signs, I find my
imagination has run away with me slightly.

WARNING: “HOPPER’S WIFE” MAY BE HAZARDOUS TO YOUR MENTAL AND PHYSICAL HEALTH !!!

The opera, directed by Christopher Alden, was composed by Stewart Wallace
to a libretto by Michael Korie. This is the same trio that brought Harvey
Milk to the San Francisco Opera last season. Alden (quoted in the Los
Angeles Times) said that he felt Harvey Milk was Up With People
compared to this one!

The cast and personnel:

The piece is scored for a chamber orchestra consisting of violin, cello,
flute and piccolo, B-flat and E-flat and bass clarinets, bassoon and
contrabassoon, saxophones (soprano, alto., tenor, baritone), trumpet and
piccolo trumpet, horn, tuba and percussion. This ensemble is seated on
stage, halfway off stage right. The set, a tipsy monochrome rendering of
Hopper’s “The House on Pamet River”, fills the stage floor and most of the
back, stage left.

The story generates itself from a post modern play on words: Hopper’s wife
becomes Hedda Hopper. It’s a joke, see. My only doubt is to whether a joke
like this one can generate anything of lasting value.

The first part of the opera finds its “inspiration” in a series of Hopper
paintings, many of which are faithfully reproduced in a handsome
desk-top-printed libretto. At the beginning of the piece, Hopper is
painting Ava (in a setting and pose recalling Hopper’s “Soir Bleu”), plying
her with flattering descriptions of a metaphoric vine of roses growing
inside her. Ava repeatedly opens or removes her blue, sheer, sleeveless
peignoir to reveal herself in the nude. Mrs. Hopper comes home from a movie
and hat-buying spree to find her services as a model supplanted by Ava’s.
The opera then commences a series of mini-character studies and
reminiscences based on Hopper paintings in which a model is shown wearing a
cloche hat (“Automat”), a straw summer sun hat (“Summertime”), a bathing cap
“Seawatchers”), and a stripper’s red wig (“Girlie Show”).

The hats, of course, gradually become the hats of Hedda Hopper. When Mrs.
Hopper has finally left her abusive husband for Hollywood, she takes Ava
with her. Ava (soon to be Ava Gardner) is already a veteran of Hollywood
and its sleazy ways. In a long scene that requires the soprano to bathe
naked in a tub whilst being painted by Hopper, we learn many details of her
— ahem! — services to Hollywood agents, none of which services are
printable in most media outlets!

In fact, I imagine would be thrown off Opera-L were I to repeat the lyrics of
Hopper’s “aria” about a visit to a pornographic movie. Let’s just say, the
acts committed and the various fluids and other substances generated by
these acts produce a lovely vision of color and texture that Hopper praises
as true art.

I have two, I suppose absurd objections to this scene. I cannot see what
the scene does to shed light on the work of Hopper. The praise of color and
texture sounds more like something that might come out of the mouth of
Jackson Pollock. And I have my doubts about the accessibility of color
pornographic peep shows given the time reference of the opera. However,
since the opera is obviously a post modern playing around with ideas, none
of which can be taken very seriously, I retreat to my own admission that the
objections are absurd.

Somewhere in all this we are meant to feel the Hopper character struggling
between his impulses toward high art and the low: the Apollonian and the
Dionysian, as it were. I think a rough version of this dichotomy is helpful
here, since the entire opera seems to deal with cultural extremes. Hopper,
the great Apollonian priest of visual objectivity, succumbs to pornography
and ultimately drowns himself. Hopper’s wife. escaping from a stifling
relationship and the art she doesn’t fully understand (she actually burns
her husband’s paintings after his death), ends up in Hollywood as the high
priestess of smutty gossip and tastelessness. The opera closes with Mrs.
Hopper posing as the Columbia Studios logo. The gunshots (remember the
gunshots?) occur as Mrs. Hopper shoots Ava presumably to death — a touch
added by Alden, I’d guess, since I don’t see it in the libretto.

The singers are fabulous. My hat’s off to a soprano who can sing and act
with her clothes off. This is no brief glimpse of nudity, mind you.
Schaufer (Ava) has a gorgeous voice, excellent diction, and (fortunately) a
voluptuous figure. This is no role for Jane Eaglen, I can assure you (and
I’m certain she wouldn’t want to sing it anyway). Gondek (Mrs. Hopper) is
also vocally gifted, and a great comic actress: but I had some trouble
making out her words at times. Trakas (Hopper) has an extremely attractive
baritone. He’s appeared as the Count in Figaro at Spoletto and Dandini at
the Washington Opera. I would imagine he was excellent. (Anybody hear him in
those roles?

The music is such a pastiche, I find it very hard to evaluate. Like some
other contemporary “art” composers who try on jazz idioms, Wallace achieves
only an awkward lumpiness in his attempts at blues. Overall, the score lacks
rhythmic interest, at least in the sense that Adams. Glass, Reich etc. have
rhythm. There is no propulsive drive. The declamatory/lyrical vocal lines
emerge over a wash of atonal smears. This, of course, is only a first
impression. In a work of this complexity, it is difficult to say what my
ultimate judgment of this music would be — but it did not appeal to me
emotionally, nor could I make coherent sense out of it on first hearing.
The musical idiom is not unfamiliar to me, but I was initially unbeguiled.
Barrett conducted with authority and conviction.

This was a co-production of the LBO and the 92nd Street Y. Interested New
Yorkers can post on this sometime in the future. It’s an entertaining piece
— and I laud the LBO for having the courage to put it on. This, with the
“double bill” of Janacek’s “From the House of the Dead” (which I reviewed
yesterday) made for an unusually stimulating afternoon of musical theater.

Knoebel Dance Theater is on the campus of California State University, Long
Beach, where the LBO is now in residence.