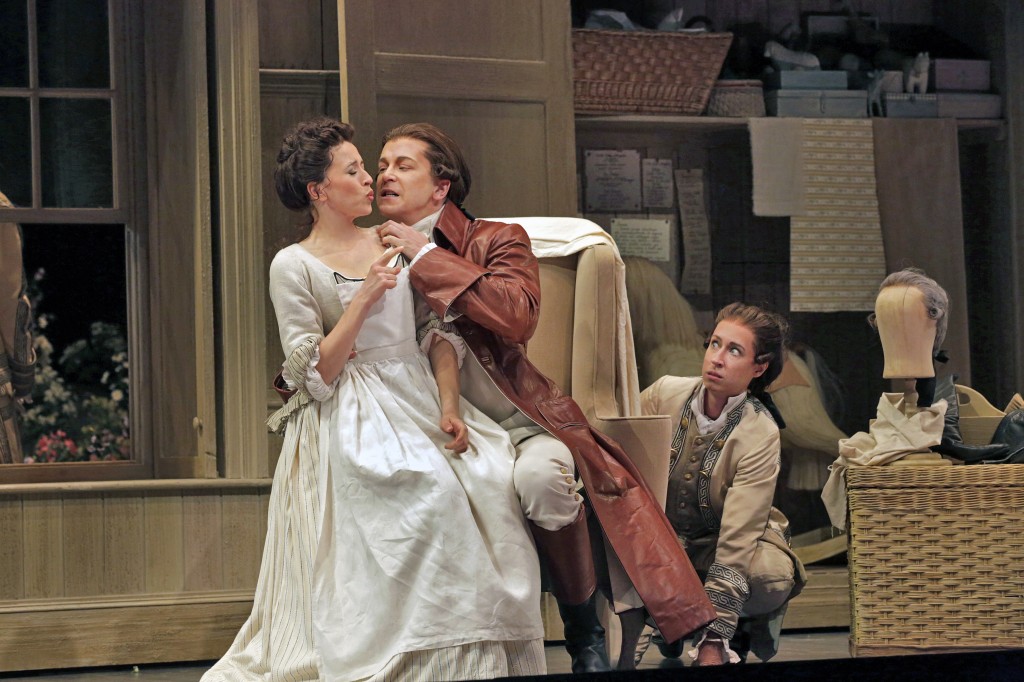 I told a close friend that I would be seeing The Marriage of Figaro again this year in Santa Fe. Probably the same production we had seen together in 2008.

“Oh, you mean the one with all the bushes,” he said.

“You know. Bushes,” he persisted. “How could you forget? They were all over the stage in the garden scene and the singers were tripping over them.”

“I simply do not remember any bushes,” I said.

And quite frankly, I have seen so many Figaros since 2008, my mind could not focus; but my friend has an amazing memory. “Well, the costumes were gorgeous. It was all very 18th-century in design, and the Figaro was a terrific Luca Pisaroni, the Susanna was the wonderful Janice Watson. Soprano Susanna Phillips was quite good as the Countess — and we were all excited because Count Almaviva was Mariusz Kwiecien, a pretty hot item at the time.”

It turns out that all those “bushes” were actually sprays of flowers sticking up from the stage floor. With a little searching at Opera West, I was able to come up with my first impressions: “A stage floor full of brightly colored fake flowers – and through the open-air stage at the back, a glorious after-the-rain sunset which turned the distant Jemez Mountains into a sharp-edged silhouette.”

Well, there was no rain last night, but the view was just as stunning as ever. I resisted the temptation to take an iPhone photo. Some others did not, and I commend the management for policing amateur mobile phone photographers with their pointless and annoying flash functions.

But back to those hundreds of flowers. Ever eager to see symbolism in opera stagings, and perhaps vainly expecting it to mean anything, I speculated about these innumerable bouquets in 2008: “During the overture, led briskly and authoritatively by an old-hand at this opera, Kenneth Montgomery, several bewigged 18th-century footmen plucked about half of the floral display and carried it off in their arms.” (This year the conductor was the considerably less energetic John Nelson, highly competent but never eliciting as much sense of freshness or excitement from the players as did Montgomery.)

As for those flowers: virginity and the loss of it is one of Figaro‘s major themes. Figaro is marrying Susanna and we first see him eagerly measuring the floor where the bridal bed will be placed. Susanna thinks the room is a little too conveniently located next to the Count’s. Indeed, Count Almaviva would like to see the flowers plucked away from almost all the attractive virgin maidens on his estate. Flowers, by the way, are essential elements of a wedding ceremony. And flowers also grow in dark summer gardens where lovers can tryst.

Can plucked flowers be replaced (something that actually happens in Act Four in this production)? Perhaps if the Count has a change of heart. Because the opera revolves around Count Almaviva’s Spanish feudal domain over which he presides with iron authority, and because he has the power to renounce an old law that permits him to sleep with any virgin maiden before her wedding, I suppose we’ll accept all of scenic designer Paul Brown’s symbolic overkill without complaint. Besides, elsewhere his ideas are beautiful to look at and quite successful. The stage-long stretch of tan wooden panels in Act One may be a tad dull (and seems to move pointlessly across our view like a slow freight train), but the Countess’s bedroom of Act Two is handsome grey Baroque confection, and the Count’s summery crystal hallway of Act Three is strikingly effective. Of course, the final garden scene with people pretending to fumble around in the darkness is always hard to pull off – and in this show we were back to tripping over flowers, quite literally at times. In any case, the period costumes are smashing (especially the Count’s outfits), and the stage direction sensible and – glory be! –non-obfuscating. Too often these days opera-goers cannot figure out the basic story.

What was more than a little disappointing last night was that the entire performance, despite a cast possessing an almost uniformly high level of dramatic and vocal skills, failed to give us any truly stand-out characterizations or moments of glorious singing. It was all very good, mind you, but destined to be forgotten — at least by this reviewer. I will always remember Gustavo Dudamel conducting Figaro with the LA Phil in Disney Hall last May (with Edwin Crossley-Mercer, Christopher Maltman, Dorothea Röschmann, Malin Christensson, Rachel Frenkel, Ann Murray, and John Del Carlo), although to be very fair, Christopher Alden’s semi-staging of that production was a confusing mess. SFO’s current show benefits from stage director Bruce Donnell’s determination to make the Mozart/Lorenzo da Ponte comedy perfectly clear and wonderfully true to the creators’ wishes. If there were such a thing as an Opera Non-Obfuscation League, they could award Donnell a top prize for making perfect sense of the story and avoiding inane Regietheater hijinks. Another friend of mine has dubbed Christopher Alden “the axe murderer of opera,” a title he shares with his identical twin brother, David. 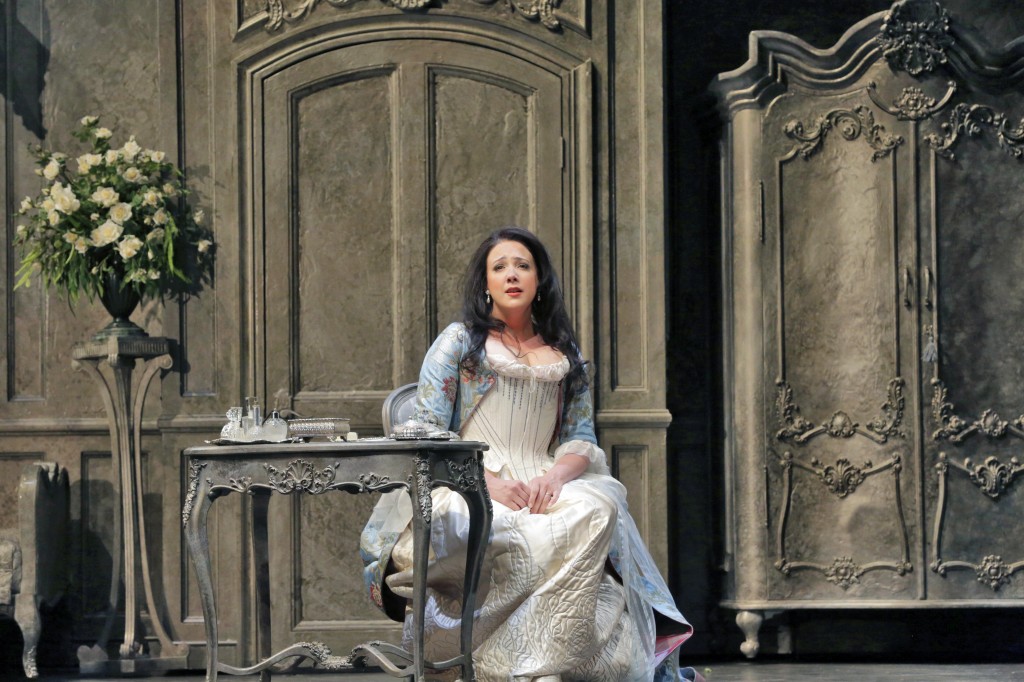 Highlights for me last night were, in the role of Susanna, soprano Lisette Oropesa’s lovely singing of “Deh vieni non tardar” in the last act, and her “Canzonetta sull’ aria,” a duet with the Countess, soprano Susanna Phillips. Phillips, a fine artist, was from my vantage point, singing with a fully exposed tone during the famous “Porgi amor” that opens Act Two, and I felt she struggled with the aria ever so slightly. Nonetheless, I admired her throughout, even if the super-pianissimo return of the main tune in “Dove sono” was not as smooth as as I might have hoped. Kudos for the attempt! If I were the director, I’d tell her to finish the piece by ripping off that hideous fright wig and throwing it into the orchestra pit! (That offending wig is not pictured above.)

I liked mezzo Emily Fons quite well as Cherubino, although I felt she worked a bit too self-consciously at trying to seem like a boy. Her “Voi che sapete” and “Non so più cosa son” were fine, but I felt they could use a touch more depth of feeling — and, to me at least, the voice seemed quite light for a mezzo. First impressions are hard to discuss.

I was a little surprised that I was not more excited by baritone Daniel Okulitch’s Count Almaviva. He is so tall and striking looking, I wanted more richness of tone. He gave the Count a polished if fairly standard characterization. With regard to acting and vocalism, I have to say the same for the Figaro, baritone Zachary Nelson. I think both men can give more than they did last night. Nelson surely has a fine career ahead of him; he has only recently emerged from the SFO apprentice program and has secured some prestigious future engagements in Dresden.

Veteran mezzo Susanne Mentzer is perfect (as usual) as the fanciful Marcellina who, while not wedded to her partner in crime, Doctor Bartolo, pursues marriage with Figaro before she is revealed to be Figaro’s mother. Basso Dale Travis acts the “old pro” in this comicality blustery part, although the voice sounds slightly frayed at times.

To end on an upbeat note, soprano Rachel Hall was a perfectly charming Barbarina, and tenor Keith Jameson a highly amusing Don Basilio.

It’s odd to say but — meh! Just a really good Marriage of Figaro, yet somehow not very special. 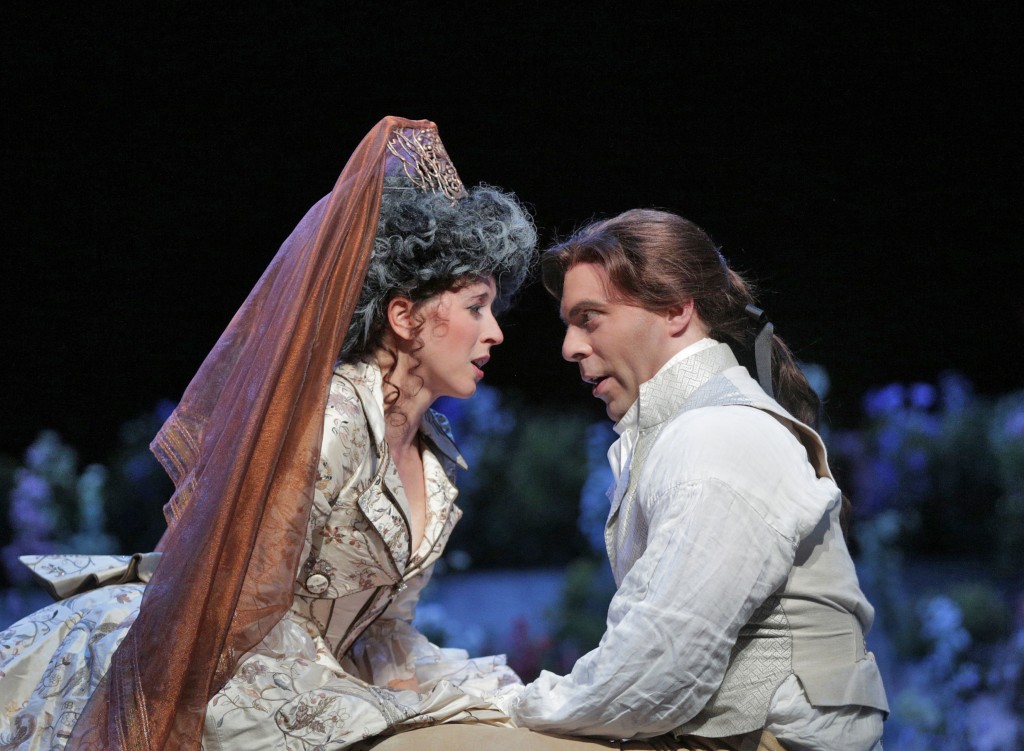