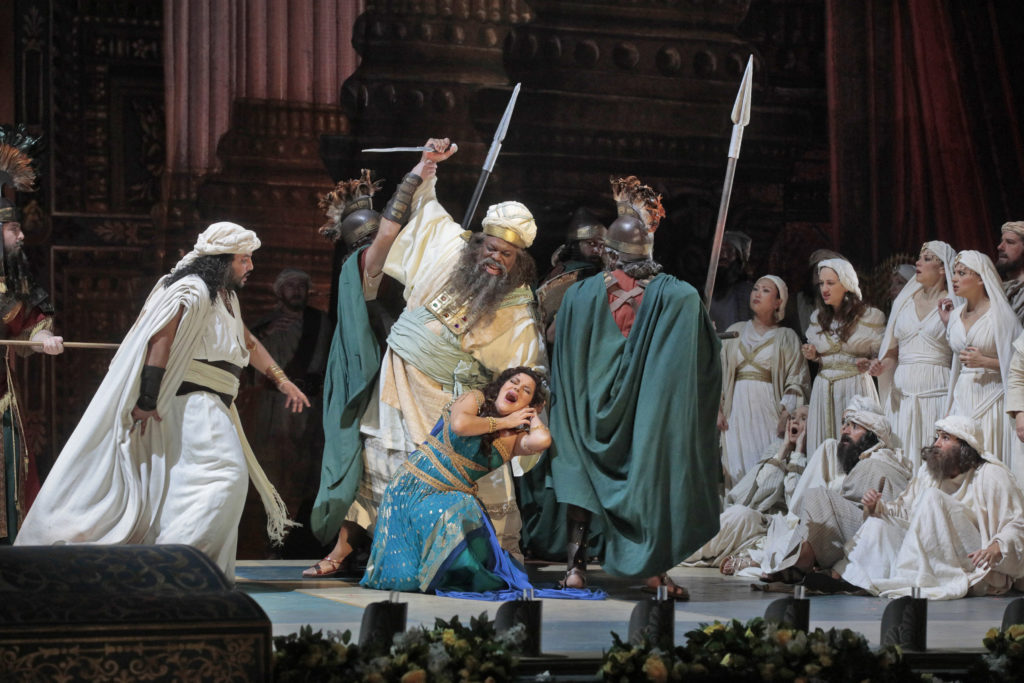 Several factors combine to make Los Angeles Opera’s current production of Giuseppe Verdi’s Nabucco a virtually perfect night at the opera — and most certainly a truly memorable one. First is the central performance of the title role by the great tenor-turned-baritone, Plácido Domingo, who manages to run the emotional gamut from ruthless Babylonian tyrant to a pathetically broken man. At age 76, Domingo’s familiar vocal timbre is still there, and his intonation is utterly secure. Nabucco is one of his finest late career achievements.

Next there is the propulsive and vital conducting of James Conlon, a maestro who really knows his Verdi. Under his direction the Los Angeles Opera Orchestra brings out colors and ornamental details a listener may have never noticed before in the score. The sounds from the pit become a vibrant driving force. Although the music may be “early Verdi” and rather crude by the standards of the composer’s later work, all such thoughts are abandoned with Conlon in control.

Then there is the production concept, a bit of Regietheater inventiveness that really works and enhances the show rather than ruining it — too often the case with such things. We are asked to imagine we are attending the opera at the time of its premiere at the Teatro alla Scala in 1842 when the theater would have been swarming with Austrians whose domination of Italy, not yet a unified country, was detested. Rather famously, Nabucco — its “hit” chorus “Va, pensiero, sull’ali dorate” in particular — quickly came to represent the Risorgimento, the force of resistance against Austrian oppression and the desire for nationhood. The Milanese at that time recognized themselves as the opera’s Hebrews in captivity. Opera has forever been very political on occasion, even subversive.

Inspired by these historical facts, stage director and set designer, Thaddeus Strassberger, gives us a framing device, literally and figuratively, which turns out to be superbly integrated. The glitterati patrons dressed to the nines, the Austrian soldiers, the stagehands, dancers, hangers-on, and other assorted characters watch Verdi’s opera transpire in what appears to be the kind of old fashioned production we often see in faded tintype reproductions.

Strassberger’s audacious staging is often very funny, but this does not damage Nabucco at its core. Verdi’s melodrama, with its fairly ludicrous libretto by Temistocle Solera, shades into utter camp and all its absurd twists and turns are a bit of a hoot, at least to my sensibilities. God strikes Nabucco senseless, the pagan idol of Baal miraculously shatters (unimpressively in this production), allegiances shift dizzyingly, and sentiments are largely over the top. The trick is to get us to take the several really genuine moments seriously, and this is accomplished by LA Opera’s superb cast and chorus.

It should be noted that the young Verdi makes little if any attempt to craft his music to sound exotically Eastern as he does in many passages of Aida. The setting may be Babylon or Solomon’s Temple in Jerusalem, but it is all Italian as Pecorino Romano. 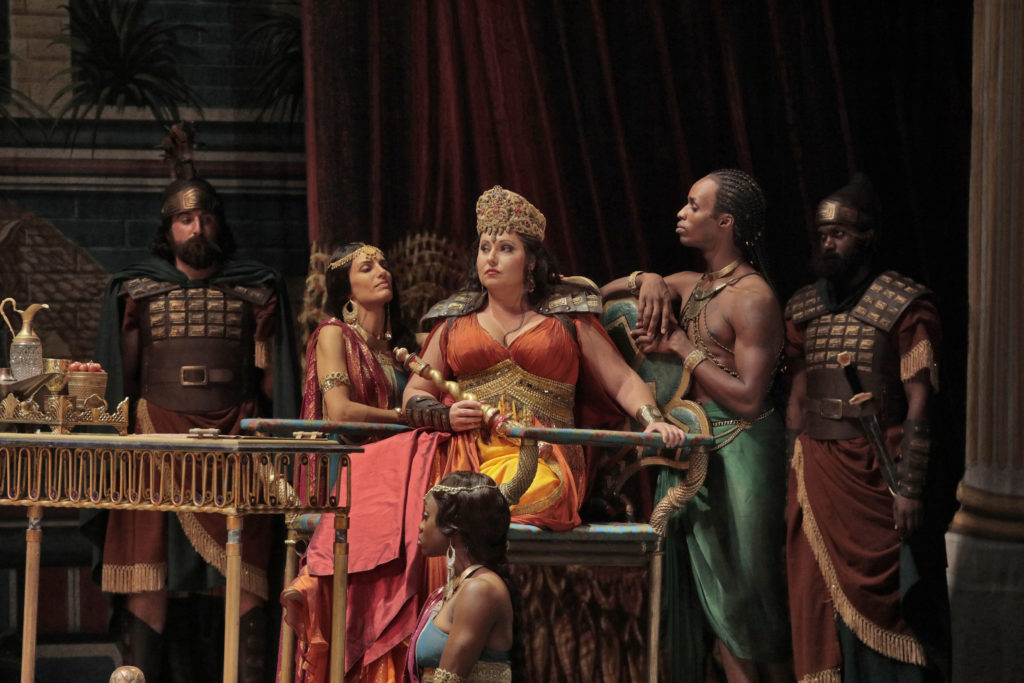 Normally one thinks of Nabucco as a vehicle for a fearless soprano who can do anything. The role of the king’s ferocious (but false) elder daughter, Abigaille, is vocal murder, soaring from the top to the bottom and back of the singer’s range. And then at the end of an aggressively dramatic evening screaming her head off, the soprano must sing quietly and tenderly once she has poisoned herself and dies begging for God’s mercy. As old recordings attest, Maria Callas was supreme at this sort of thing back in 1949, but Ukranian soprano Liudmyla Monastyrska now appears to own the role and is remarkable in it. 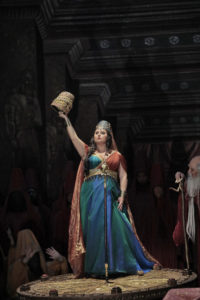 Abigaille is part of a traditional but confusing operatic love triangle involving Nabucco’s real mezzo-soprano daughter, Fenena, who, like Abigaille, is in love with the tenor, Ismaele, the nephew of the King of Jerusalem. Domingo used to sing this rather unrewarding part and was very good at it. Mario Chang is singing it well in LA and is good in the ensembles, but he is overshadowed somewhat by his strong compadres. The Fenena, mezzo Nancy Fabiola Herrera, is a formidable vocal force in her own right and a good match for Monastyrska. Herrera is a much more credible dramatic stage presence than Jamie Barton, the superb mezzo who has sung the role with the Met recently — and with a cast that included Domingo and Monastryska. It is now online video streaming for a fee.

One of the more glorious voices to be heard in this Nabucco is that of basso Morris Robinson as Zaccaria, the high priest of the Hebrews. His is simply a thrilling sound, sonorous and imposing. It was partly because of Robinson that the very first scene was so exciting. Conlon was driving his orchestra forward with tremendous excitement and the chorus in top form — and here was Robinson as the icing on the cannoli in a powerful aria and cabaletta. 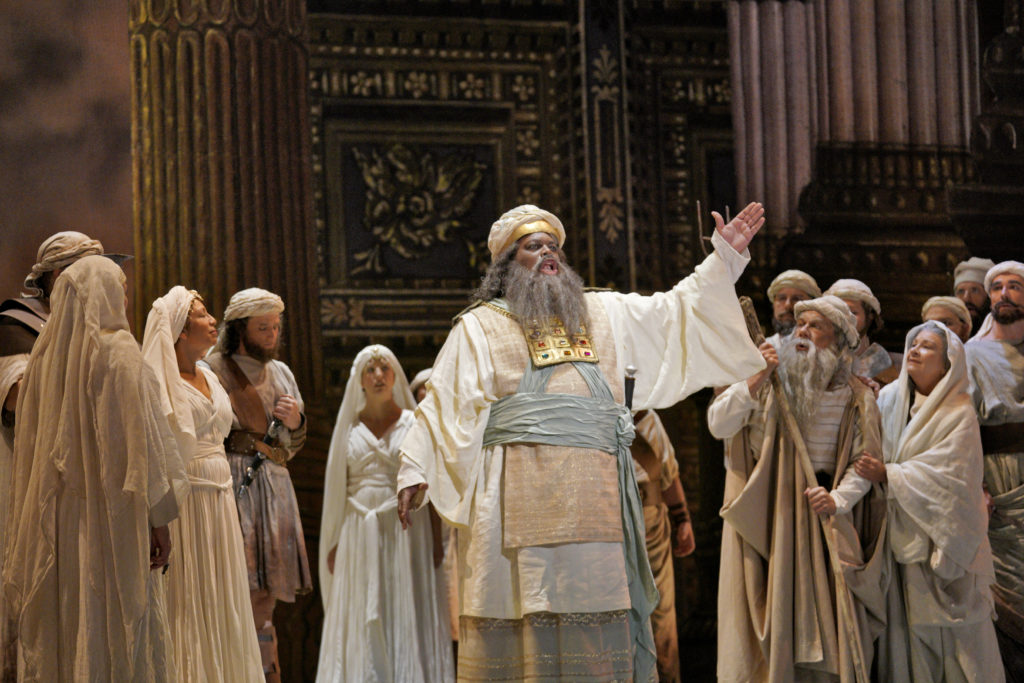 It must be said that instant encores of the moving and lovely chorus, “Va pensiero” are generally the rule these days. Everyone applauds until it’s sung again. It’s a ritual akin to standing during Handel’s “Hallelujah Chorus”. So I was initially surprised when it was not repeated as is the custom during scene two of the third act. When the repeat did come — at the end of the final curtain calls — it was a delight for everyone in the audience. A lone soprano voice started singing the familiar tune, and it was gradually taken up by the whole chorus and finally the orchestra conducted by Conlon from the stage. “Viva Verdi” banners were hoisted. Meanwhile, the supertitles offered the lyrics in Italian so that we could all sing along. My companion got the spirit, and I hummed away happily as well during this, for once, wholly merited standing ovation. It’s not always there’s one of those.

Domingo signed autographs for patrons who bought CDs, a crafty business maneuver it would seem. And successful. The queue to his signing desk snaked on and on and outside the north side of Dorothy Chandler Pavillion — and I could not tell where it ended. Domingo is destined to be legendary if he is not already. 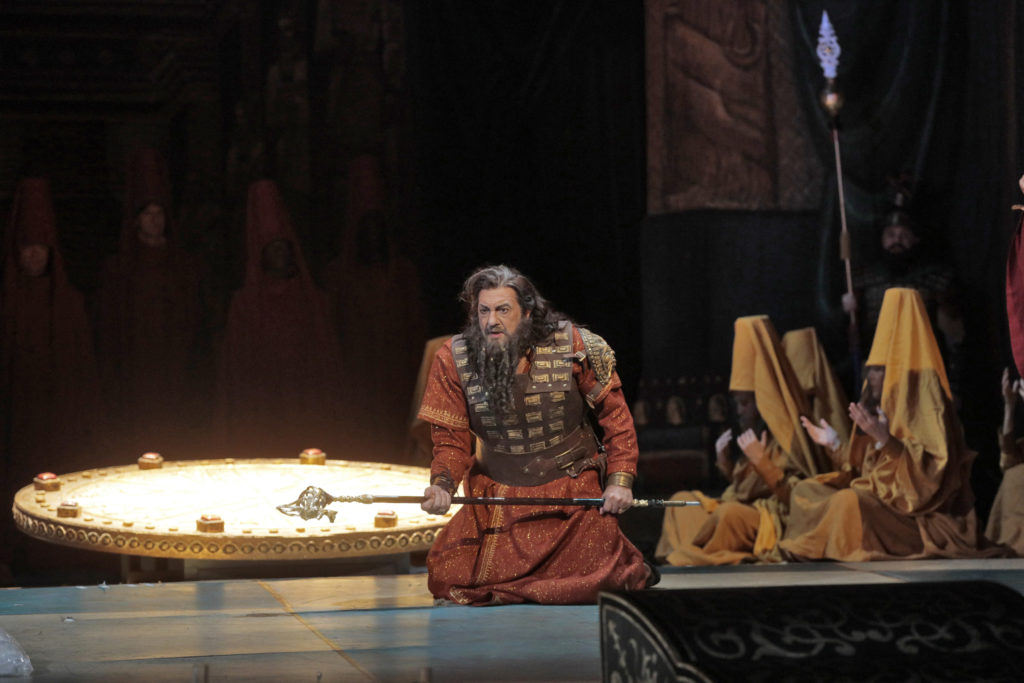 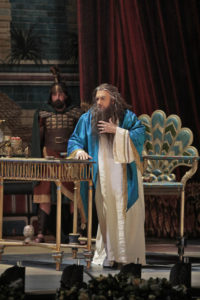