Growing old does not mean forgetting falling in love for the first time. I did not even know how to pronounce the composer’s name (it looked like Wag-ner to me, as in a dog wagging its tail), but the record store proprietor set me straight on that issue. The album was “Toscanini Conducts Wagner” and it grabbed my eye with its cover emblazoned with a large golden seal set in a creamy textured background.

I took the set into the listening booth (where so many customers in those long-gone days tended to scratch the delicate LPs and leave them covered in fingerprints) and it was there that I first fell under the spell of the Prelude to Act One of “Lohengrin,” that magical arch of shimmering beauty which slowly rises from a preternatural hush to a great climax before fading once again into the mist. To me it seemed a structurally perfect composition and, at the same time, profoundly moving.

Next I progressed to the track containing the Prelude to Act Three, Wagner’s jubilant description of preparations for what suggested to me the most thrilling wedding ceremony in history. Toscanini ended it, however, with the frightening minor-keyed music that delineates Lohengrin’s fateful warning to Elsa. This, for me, remains one of the greatest “fate” themes in opera, right up there with the doom tune in Bizet’s “Carmen.”

I mention these memories as a preface to some comments on the Los Angeles Opera’s current production of “Lohengrin” for two reasons. The first is that the greatest thing about this Wagner offering is in the playing of the Los Angeles Opera Orchestra under the direction of the company’s music director, James Conlon. Everything Conlon did with the score brought back to this listener those moments of first love – and not just with his superb renditions of the preludes, but with his passionate involvement with the entire score. It was not long after the Toscanini album, of course, that I came to love the complete opera (in a very inadequate recording I won’t embarrass myself by admitting to owning!)

The second reason I start out this review with talk about the beauty of the music and my love for it and how well it was played is that opera criticism today has become largely a matter of discussing, often at endless length, the production concepts of the stage directors that now reign supreme. I have learned from various nasty “letters to the editor” and from one conversation with one notable American opera director based in Berlin that Americans are totally resistant to new concepts in opera, largely because we are all sexually repressed, not to mention provincial and narrow minded. We are supposed to take our Regietheater and like it or else admit we are all intellectually stunted rubes as well as moral Puritans in need of Viagra.

Anyhow, this latest American based in Berlin to come along to enlighten us all on the subtext in “Lohengrin” is Lydia Steier working presumably in tandem with set/costume designer Dirk Hofacker who works all over the world including Darmstadt and at the Met in sadly provincial New York City. They have come up with a very interesting although sporadically risible drama that, to quote Steier exactly, takes place on “the Franco-German border in the wretched last days of World War I” in a perpetually snowy partially bombed out church “which has been reappointed as an improvised field hospital for the sick and injured men of Brabant. Row after row of cots supporting men broken on the battlefield are traversed by set-faced nurses moving from one man to the next.” For a complete explanation of this, please see “Notes from the Director”.

My feeling is that Ms. Steier’s vision is as valid as several other “Lohengrins” floating around now on DVD and far less destructive than most of them. It was easy to enjoy the opera without worrying too much about the staging — even if, as a friend remarked, the set might have better served “All Quiet on the Western Front” and – as for the concept – “I still say it’s spinach and to hell with it.”

Given a generally strong cast and the work of James Conlon — plus the invaluable contribution of the opera’s excellent chorus and choral director, Grant Gershon — this “Lohengrin” was occasionally thrilling. Those wonderful antiphonal effects!

What was missing was a really great Lohengrin – and ironically, the Los Angeles Opera has a future engagement planned for the tenor who is currently the greatest Lohengrin on earth: JONAS KAUFMANN. Unfortunately, Ben Heppner, for a long time the title holder, is currently singing Lohengrin in LA and we have to wait until March 11, 2011, to hear Kaufmann in recital with piano. Sigh! Meanwhile, Heppner’s vocal problems seem to have recurred. He brings many moments of beautiful lyricism to this part even now, but the night I heard him (Nov. 28) he was not fully engaged dramatically and several vocal passages caused him difficulty. I have long been a big fan of Ben and I hate to see him when he is not as his best. I will never ever forget a heart piercing Walther von Stolzing (“Die Meistersinger”) at the Met. I also own most of his recordings.

Before getting to the excellent Elsa of Finnish soprano Soile Isokoski, I feel I must mention the fabulous “Verdi mezzo of the day,” Ms. Dolora Zajick undertaking her first major Wagner role, the villainous Ortrud, holder of the pagan flame. Every time she opened her mouth, she let out a sound of such power you felt that everyone else singing must be “marking” the score. She has a big voice that literally makes other voices sound small! And, frankly, if it had not been for various quirks of the costuming and strange bits of stage direction, I would proclaim her the greatest Ortrud I have ever heard. The ghost of Leonie Rysanek haunts me as I say this, but Leonie might prefer we recall her Elsa instead. Rysanek was perhaps a more instinctively intense stage animal than Zajick.

I loved the Elsa. Isokoski’s sound is gorgeous, really beautiful and expressive. But, once again, she was asked to do some silly stage business from time to time, and in these little things, strong performances lose some of their force. She had an excellent partner in American bass baritone James Johnson as Telramund, Ortrud’s pliable husband who hopes to become Duke of Brabant. Johnson balanced the evil and quasi-sympathetic aspects of his role quite well. And in Wagner’s Department of Making Impressive Proclamations we got some really first-rate performers: basso Kristinn Sigmundsson as King Heinrich and baritone Eike Wilm Schulte as the King’s herald. Quadrupal nobility was grandly displayed by tenor Robert MacNeil, tenor Gregh Fedderly, baritone Museop Kim, and basso Matthew Anchei (1,2,3 and 4 in that order).

The lovely final vision of the recovered Duke Gottfried was provided by Hannah Victoria Stock. If we could not get a swan (none to be seen anywhere) we at least got this stunning apparition!

An afterthought: If I were reading this review and did not know my own mind, I would think the piece seems to express a sort of prejudice against “director’s theater” in general. But, quite the contrary, I like — even crave innovative approaches to classic theater, opera in particular. I was and still am drawn to the Long Beach Opera, a company that has always thought outside the box. I would not want to see “Lohengrin” staged again the way it was over 50 years ago. For me, some Regietheater is terrific, some not so much: the more pretentious and convoluted the director’s concept becomes, the more it violates the spirit, the emotional impact and even the meaning of the original work. I felt Achim Freyer’s “Ring,” for instance, imposed a form of Brechtian alienation on the music and drama of one of the least alienating of composers. Wagner tries to humanize his subjects and appeals to our emotions. On the other hand, I am ready to admit, an ultra-traditional treatment of Wagner’s mythological world would appear alienating in quite another way to most sophisticated audiences today. 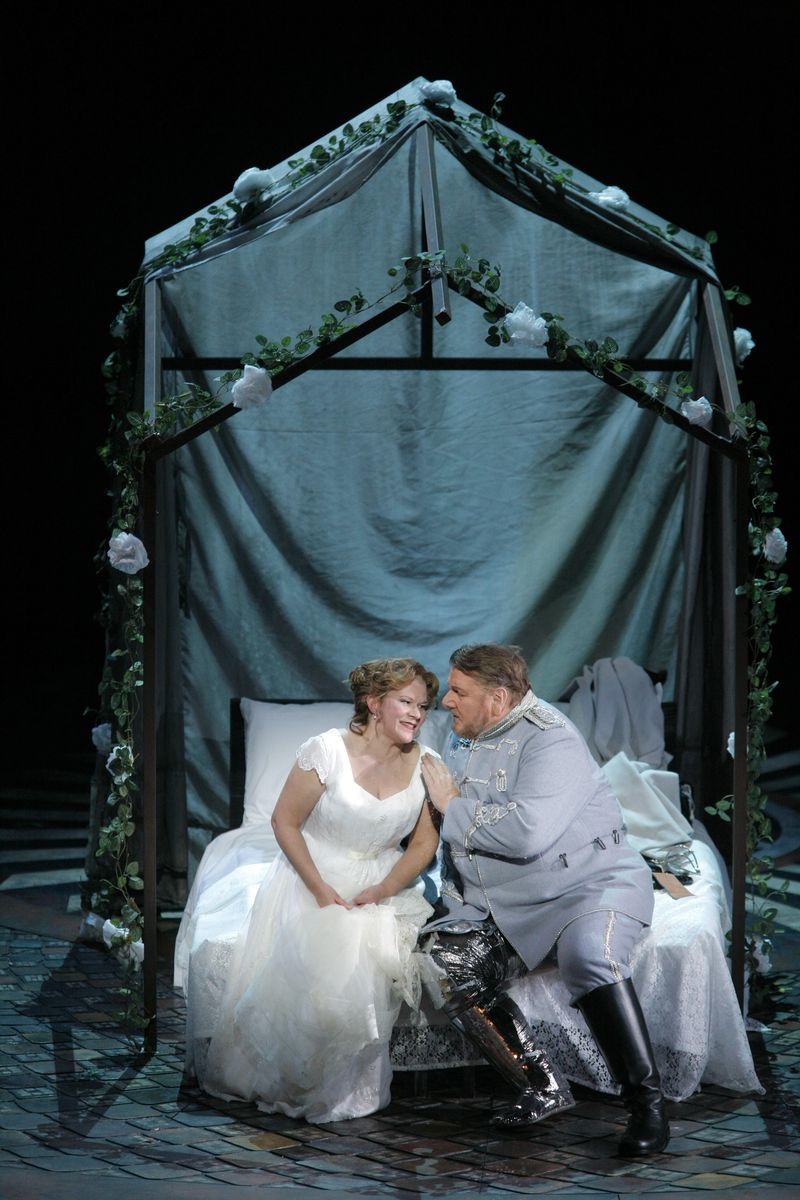