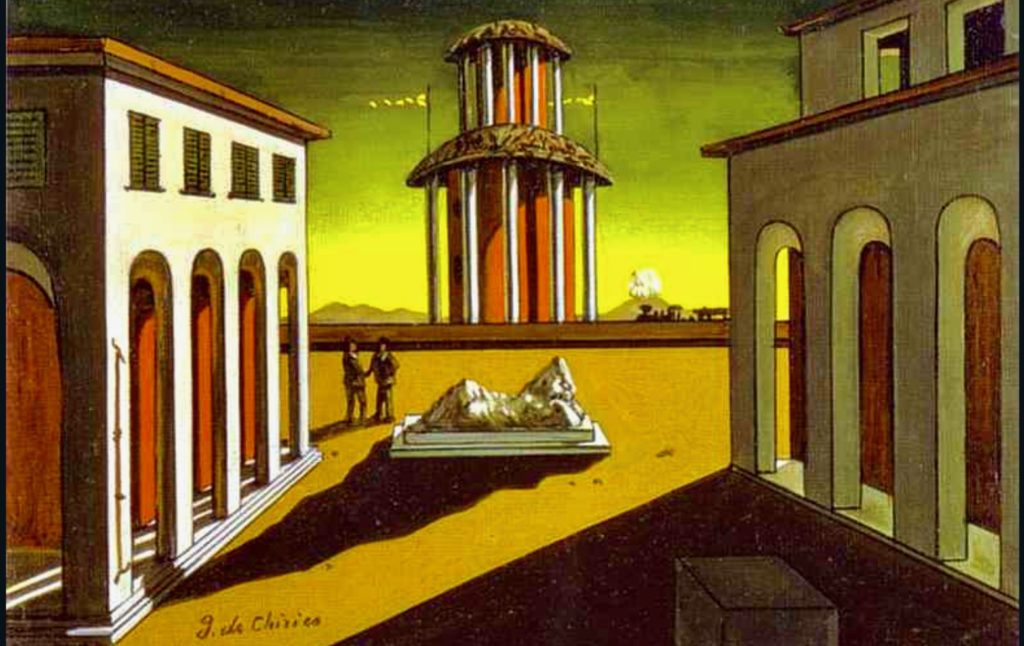 Michael Yeargan’s sets evoke the style of painter, Giorgio di Chirico. Photo believed to be in US public domain.

Following a stretch of controversial Regietheater productions, most notably Wagner’s Ring and the still-running Lohengrin, Los Angeles Opera’s current Rigoletto offers the disgruntled some concept-free relief with Constance Hoffman’s Renaissance costumes and Michael Yeargan’s colorfully attractive sets in the style of painter, Giorgio di Chirico; however, the big star once again, as it has been all along, is the conductor, James Conlon.

Conlon is not the first great conductor to have an affinity for the music of both Verdi and Wagner. Toscanini springs most readily to mind. And Conlon’s approach to Verdi recalls Toscanini’s in several important aspects: his deep sympathy for the dramatic content of the music, his grasp of the coherence of the score, and his brisk, forward driving tempi.

When an opera score consists of a series of numbers (arias, choruses, dances etc.) all strung together, it is essential to make the separate modules come together. Not all conductors can do this, but Conlon most certainly can. He also understands exactly how each number functions to support the text. The brisk tempos help to fuse all the opera’s elements in a dramatically compelling fashion, and they also have a definite effect on listeners who already know the opera well. The musical and dramatic events fall into place inexorably and without surprise. Fast tempos – the frightening rush to the abyss, so to speak – increase the sense of dramatic tension. Things never flag. They rush toward the inevitable disaster: the death of Gilda and her father’s dreadful recognition of his tragic complicity with fate.

I did not have a stopwatch for the first scene of Rigoletto, but I would guess it to be little more than 18 minutes long. The “take no prisoners, full-speed ahead” approach to Verdi’s middle operas is extremely compelling with someone like Conlon in charge. I was reminded of the first time I heard Tocanini’s recording of Un Ballo in Maschera in which the score unfolded in a piercingly aggressive fashion that swept me up into the crazy melodramatic action.

The stage director on LAO’s Rigoletto is Mark Lamos, but the actual extent of his control over the singers would be most interesting to know. For the title role of the tormented hunchbacked jester, Lamos was given, as were we all, Georgian baritone George Gagnidze, a singer with a rich, round sound well suited to Verdi’s music in these times so starved for a voice of this type. Nothing he did vocally was less than impressive.

However, a quick listen to what Tito Gobbi was able to accomplish with this role (still available on an EMI recording conducted by Tullio Serafin) reveals one quality Gagnidze lacks: the power to shape the words and music into a compelling emotional drama. Gagnidze does not touch the heart. You can even SEE one reason why this is so: he simply occupies his own encapsulated space. He does not truly relate to his daughter, Gilda, nor does he effectually confront his enemies. He gesticulates to an abstract space around him and never interacts with anyone, not even the audience really. Someone – Lamos? – needs to say, please, please pay attention to what others are singing and doing. React and interact!

Then there is the Italian tenor Gianluca Terranova as the philandering Duke of Mantua. A wonderful voice! And he wants to make certain you hear it, too – always as loud and forceful as he can make it. What a contrast with a real artist like Jonas Kaufmann who takes the care to explore vocal shadings and dynamic nuances and even dares to sing softly at times! Terranova was successful as the Duke, not because he acted well or related to the other characters, but because he quite literally seemed to incarnate selfish egotism. He “played to the house” and that was enough for him. At the end he seemed quite pleased with himself. He had given the public their money’s worth: an authentic Italian voice that rings through auditoriums and outdoor arenas – like the one in Verona where he has sung this role in the past.

As Gilda, the much abused heroine of the piece, soprano Sarah Coburn seemed just about ideal to me. She has very sweet voice with a fast and attractive beat to it, and she not only looks the part — in fact, she’s perfectly lovely! – but she sings with a great deal of expression and intelligence. She looked as if she would be the ideal Gilda to act WITH as well, if anybody else at all were acting. She clearly has more on her mind and in her talent than the “Caro nome” coloratura stuff – and she carried off the latter superbly.

Singers who are cast as the assassin Sparafucile often have extremely distinctive timbres to their voices, as does the acclaimed bass Andrea Silvestrelli. I imagine you are are born speaking with this kind of voice and then everyone tells you should sing. Silvestrelli made an especially scary Sparafucile, deliciously reveling in his basso profundo. Meanwhile, Australian bass Daniel Sumegi, while not quite as impressive as Silvestrelli, rumbled with his own distinctive sound as Count Monterone, that wonderful character who appears from time to vent his fury and to curse people.

The role of Maddalena in Rigoletto is a curious one for such a small individual part. Her voice is an essential element in one of the most famous moments of the opera, the quartet of Act Three, but she has no aria of her own. Her main function is to lure the Duke into the nefarious inn and ultimately to protect him from being murdered. One would like to hear much more from mezzo-soprano Kendall Gladen, wonderful in her character and in the well-sung quartet.

The rest of the cast, listed below, were excellent in their parts, and overall the evening was a great pleasure – though it never went too deeply beneath the surface.