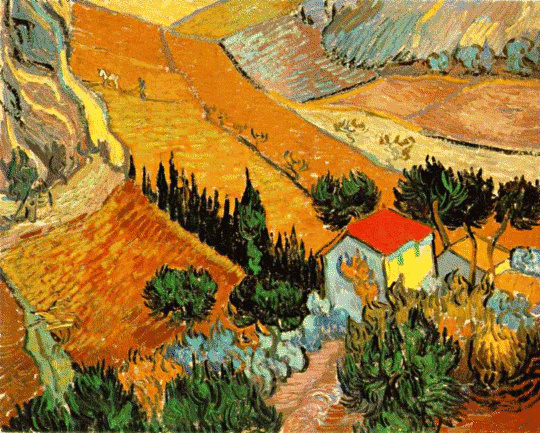 Michael Gordon's "Van Gogh" will be featured in LBO's 2013 season. "Landscape with House and Ploughman" is believed to be in public domain.

LBO Calls in The Police for a Killer Season: Five Premieres and Five New Productions

Commenting on his selections, Mitisek says, “These operas have immense theatricality in their exploration of people on the border between the real and the imaginary, truth and illusion, ambition and treachery, genius and madness. Musically, the season is a fascinating kaleidoscope of styles – a colorful pattern from the early 20th century post-romanticism of Ernest Bloch to the progressive rock-influenced music of Stewart Copeland, founder of the rock band, The Police. In 2013, we will cross the borderlines of opera convention and enter new territories of the unseen and unheard.”

About the ambitious step of producing an entire season of unusually diverse operas, Mitisek is comfortable with his decision saying, “LBO’s growing, curious audiences are open to new adventures and experiences in often unconventional places. Unlike other companies, we offer an entire season of virtually unknown works which deserve to be performed. It’s a ‘killer’ season in every sense and LBO to its core.“

Returning to the venue of last season’s Maria de Buenos Aires, LBO will present three performances of Usher at the beautiful Warner Grand Theatre. Once called “The Castle of Your Dreams,” the art deco movie palace is the perfect venue for this ghostly tale of a mysterious mansion with an apparent life of its own. The opera marks LBO’s first co-production with the Chicago Opera Theater (COT) under the joint directorship of Andreas Mitisek. COT will open the work on February 23, 2013.

Camelia “la Tejana” and her lover are drug traffickers smuggling marijuana from Mexico to Los Angeles until betrayal by one turns the other into a killer. Based on newspaper accounts and inspired by the ballad “Contrabando y Traición” (Smuggling and Betrayal), this explosive docudrama is set to contemporary music, incorporating the accordion and tuba of Northern Mexican corridos (ballads), and presented against graphic film footage. First developed in a November 2008 workshop at Indiana University Jacobs School of Music, the final version premiered in 2010 at the Festival de Mexico in Mexico City.

Unicamente la Verdad will be staged at the Terrace Theater in Long Beach, CA..
Gabriela Ortiz’ work has been commissioned and performed by the Los Angeles Philharmonic (conducted by Salonen), the Kronos Quartet, and Dawn Upshaw, among others. Ortiz has won many awards including Guggenheim and Fulbright Fellowships for Unicamente La Verdad. Rubén Ortiz-Torres’ work is widely recognized and part of the permanent collections of many museums, including the Los Angeles County Museum of Art. Besides being a painter, video artist, and photographer, he is on the faculty of the University of California San Diego.

A double bill of delusion and illusion begins May 11, 2013, when LBO stages four performances of Tell-Tale Heart, a U.S. premiere, and Van Gogh, a Western U.S. premiere, at the EXPO Art Center in Long Beach, CA. Both works feature music at the edge of rock, jazz, and classical modernism.

Stewart Copeland’s Tell-Tale Heart
In Edgar Allan Poe’s classic short story, a beating heart reveals a murderer, but whose heart is really beating? Says composer and librettist Stewart Copeland, drummer and founder of the rock band The Police, “The language of the original text drips with lust for the deed – it soars, it gloats, and it marches with the rhythm of false conviction. It’s perfect for opera.” And, Copeland continues, “The loquacious murderer expounds his manic inner logic as the throbbing guilt consumes him. It’s the throbbing part I particularly like.”

Best known for performing with Sting and his other band mates, Copeland is also an accomplished and versatile composer whose operas, ballets, symphonies have been presented by Ballet Oklahoma, Seattle Symphony, and Cleveland Opera, among others. His many film and television scores include the soundtracks to Wall Street, Talk Radio, and Airbourne.

Reviewing the opera’s 2011 world premiere at the Royal Opera House in London, Richard Morrison wrote in The Times, Copeland’s score is perfectly effective…This murderer’s Jekyll-like split personality is cleverly conveyed by musical means.” And, Edward Seekerson commented for The Independent, “…[Copeland] took to the stage with an innate sense of what music theatre needs to do.”

Michael Gordon’s Van Gogh
Based on Van Gogh’s letters to his brother Theo, this moving work explores the fine line between madness and genius. “What attracted me so much to Van Gogh’s writing was the pain, rawness and brutal honesty,” says American composer and Bang on a Can co-founder, Michael Gordon. “I found it hard to believe that anyone could tell another person, even his brother, the raw emotions that Van Gogh experienced – so painful, so lonely, so humiliating.” In 1991, the work premiered in New York to critical acclaim and was later performed in Vienna, Austria. In 2003, Gordon re-orchestrated Van Gogh and Crash Ensemble, an interdisciplinary Irish music group, premiered the new version in Dublin the same year.

Conductor Alan Pierson of Alarm Will Sound comments, “The Van Gogh opera is amongst my favorite Michael Gordon works: it’s hard-hitting, edgy, but includes music of impassioned lyricism.” Van Gogh is dedicated to fellow composer and Bang on a Can co-founder, David Lang, whose opera,The Difficulty of Crossing a Field, was performed by LBO in 2011.

Ernest Bloch’s Macbeth
From June 15 to June 23, LBO closes the 2013 season with Swiss-American composer Ernest Bloch’s re-discovered powerhouse, Macbeth. Based on Shakespeare’s play, the opera tells how ambition, a manipulative wife, and witches’ prophecies spur a Scottish general on a path toward treason. Bloch’s version draws directly from the original Shakespeare text, using lines from the play to propel the action forward.

The opera premiered in 1910 at the Opéra-Comique, Paris. In 2009, University College Opera London presented the UK premiere with Bloch and Alex Cohen’s 1951 English libretto. Commenting on the production in Classics Today, Robert Levine wrote, “Where has this opera been hiding?…It deserves wider hearing – it’s a masterpiece.” Conductor Charles Peebles says of Bloch’s music, “Every chord is brilliantly calculated and there is a polish about the whole opera that is amazing…When all is gathered up, Macbeth’s absence from the operatic schedules of the world opera houses is more surprising than most.” LBO will be the first professional U.S. company to stage this important work. Bloch’s dramatic opera will receive site-specific staging at the Port of Los Angeles, San Pedro.

COMING SOON in 2012: Before the new season begins, science meets opera at the water’s edge when LBO presents the U.S. Premiere of Gavin Bryars’ The Paper Nautilus, the first production of its new chamber series “Outer Limits.” Performances will take place on September 7, 8, and 9, 2012 at 8:00pm at the Long Beach Aquarium of the Pacific. This new initiative is supported by The Andrew W. Mellon Foundation.

Long Beach Opera (LBO) is internationally known for cutting-edge interpretations of unconventional repertoire. LBO creates immediate, inventive and often boldly avant-garde productions for an adventurous audience and stands apart from most other companies in the number of world, American, and West Coast premieres it has staged. Founded in 1979, LBO is one of the largest professional opera organizations in Southern California and the oldest in the Los Angeles/Orange County region. LBO’s performance history includes more than 90 operas ranging from the earliest works of the 17th century to new operas of the 21st.