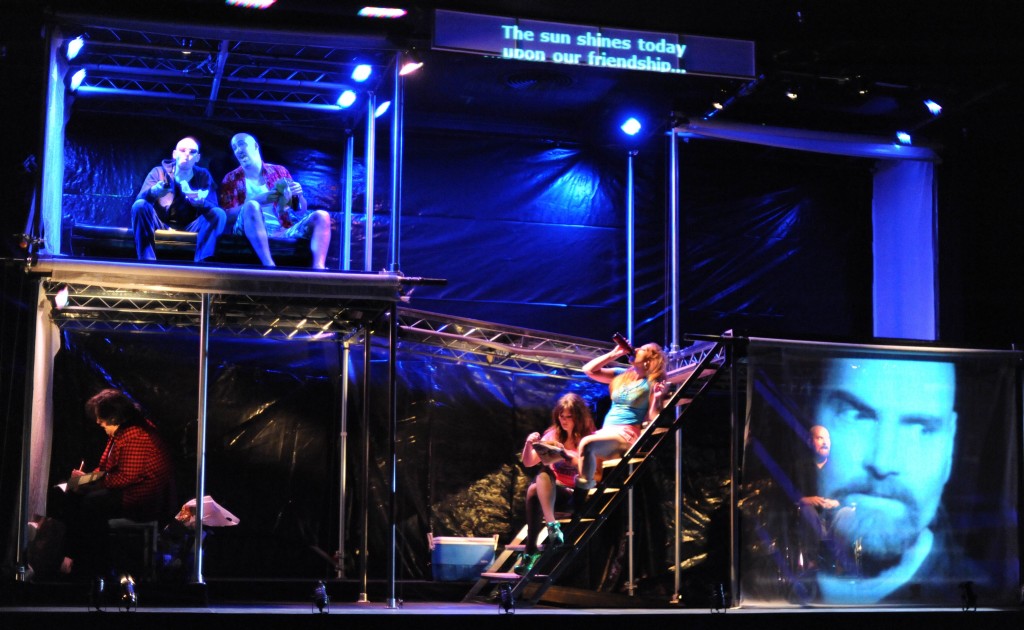 Sunday, May 12: Review by David Gregson of May 11 performance.

“Vincent Price will be turning in his grave!”

This provocative warning made by a Long Beach Opera supporter (and I confess to being one myself) was supposed to prepare my nerves for a transgressive Edgar Allan Poe experience, the US premiere of Stewart Copeland’s Tell-Tale Heart, Long Beach Opera’s latest daring effort which opened as part of a double bill with Michael Gordon’s Van Gogh in a four-performance run which began Sunday night at the Long Beach Expo building on Atlantic Boulevard.

It was indeed a harrowing experience, exceeding in shock value those horror-show double-feature movies I enjoyed so much as a teenager. I must confess, however, the infamous Roger Corman low-budget “Poe” movies made for American International Pictures, were released during my more mature college years, and I never cared for any of them; and I always felt that Vincent Price, a fine actor really, had much to atone for. The films were invariably wildly inaccurate adaptations of the Poe stories, with Price replicating his hammy villain act time after time. It’s Poe that was turning in his grave!

In graduate school I read all of Poe and actually went on to earn a Ph.D. in English and American Literature from UCSD. (I apologize, dear reader! This is the first time as a critic I that I have ever emerged in print waving my diploma!) In any event, I take issue with Mr. Copeland’s stated attempt to equate Poe with the murderous madman of The Tell-Tale Heart (Poe’s title). “The author was such an odd fish and the account is so convincing that it’s tempting to see a genuine confession in the tale.” Well, actually Poe was more of an intellectual theorist who wanted to create a new literary genre in which a reader would be subjected to a brief, highly intense experience. He tried this with love poetry, but horror seemed to work the best.

Whatever one thinks of The Tell-Tale Heart as a work of art, one thing is undeniable: it is very brief (less than three pages long), very intense, nicely streamlined and uncomplicated — at least in terms of what is termed “the Aristotelean unity of of action”: the narrator is obsessed with a harmless old man’s vulture eye, and so he murders and dismembers the man and buries him under the floorboards. But the narrator’s guilt is so great that he imagines the heart beating — beating — beating away and revealing his crime. He confesses all to the police.

To destroy the unity of action in this tale, all you would have to do is introduce extraneous elements such as slutty neighbors (swimmingly slummed in this show by soprano Ashley Knight and mezzo Daniella Bond), a Jungian “shadow self” (baritone Jason Switzer, excellent also as an imposing police officer), not to forget another character, Alan, plus a second officer (gorgeous-voiced tenor John Matthew Meyers). And then you could include an inexplicable mass murder. But I imagine that in his capacity as stage director and production designer, the usually astute Andreas Mitisek, has added all that extra freight to Copeland’s piece. Tell-Tale Heart ends up as a Grand Guignol chamber of horrors, a bit — no, way over the top — and certainly palpable proof to Mr. Copeland that the composer is not God: “In opera, the composer is God. And I like playing God.” Well, welcome Herr Copeland to Regietheater!

And watch out for the charmer Andreas. He’s a genius — but a bit of a devil!

The accomplished baritone Robin Buck managed to be genuinely scary as “Edgar,” the protagonist (as Copeland would have it), and he was aided in the scariness by greenish video enlargements of his features. LBO casts strongly as usual. And listed in the program as “Actor,” Mark Bringelson made a constantly intriguing presence in both operas.

I was not especially enamored of a score that seemed devoid of any special vitality and originality, but its execution (lots of percussion!) by the What’s Next? Ensemble under the direction of Benjamin Makino was exciting — even overwhelming. A string quintet, clarinet and electric guitar were in the mix I believe. Visually we were being bombarded by images from the scaffolded stage and by wonderful video projections by Adam Flemming. Nobody beats LBO for projections, not even the Met. The opera’s text, however, was some of the worst rhyming doggerel I have heard in years.

Much the finer of the two works, Van Gogh opened the program (at about 55 minutes length) — and quite frankly, it would have made an emotionally satisfying evening all on its own. Copeland may be the founder of The Police, but Michael Gordon, a really fine composer, is the co-founder and co-artistic director of Bang on a Can, my contemporary music heroes — and I am totally with The New Yorker‘s Alex Ross in admiration for Gordon’s work.

That said, the sensitively conceived Van Gogh, really a series of scenes and/or songs drawn from Van Gogh’s famous correspondence with his brother Theo, came off as a bit of a horror show, an obvious attempt by Mitisek to link it to the Poe piece. The music is pure Gordon, projecting a sort of Steve Reich-ish minimalist appeal but with more emotional oomph. In Gordon’s own description, the excellent and touching texts follow the arc of Van Gogh’s life chronologically. Van Gogh travels through England, decries his lack of employment, measures his rising creativity, seeks love from a prostitute, falls far from the mainstream of contemporary art, contemplates suicide and ends up in the mad house. Only one of the six scenes is entirely instrumental, and here again, praise is due to Makino and his superb ensemble, no stranger to the piece it seems.

The main horror of Van Gogh (for me at least), came from the writhing figure of Van Gogh trashing about on his high-perched bed, terrifying me with the idea he might actually fall out of his elevated cubicle sans guard rails. Opera performers these days really do risk injury on dangerous sets! But the letter-singing/reciting trio of Ashley Knight, John Matthew Myers, and Jason Switzer brought great pleasure musically (despite passages in an odd vibrato-less intonation). The video projections were amazing, greatly enhancing our sense of the artist’s torment. At least one scene may have shocked some people in the audience for its highly suggestive sexual union between Van Gogh and a prostitute.

As I said before — it was a harrowing experience. And the Expo venue, despite literally luxurious Porta Potties, is not comfortable: hot, stuffy and humid, with closely placed straight-back seats.

As for the operas — well, I have my quibbles, but nobody should miss what goes on at the LBO. I think total fossilization is the alternative. Can I face yet another Tosca? Looks as if I am about to! This Saturday in LA. Thanks to the LBO, life does not have to be all business as usual. 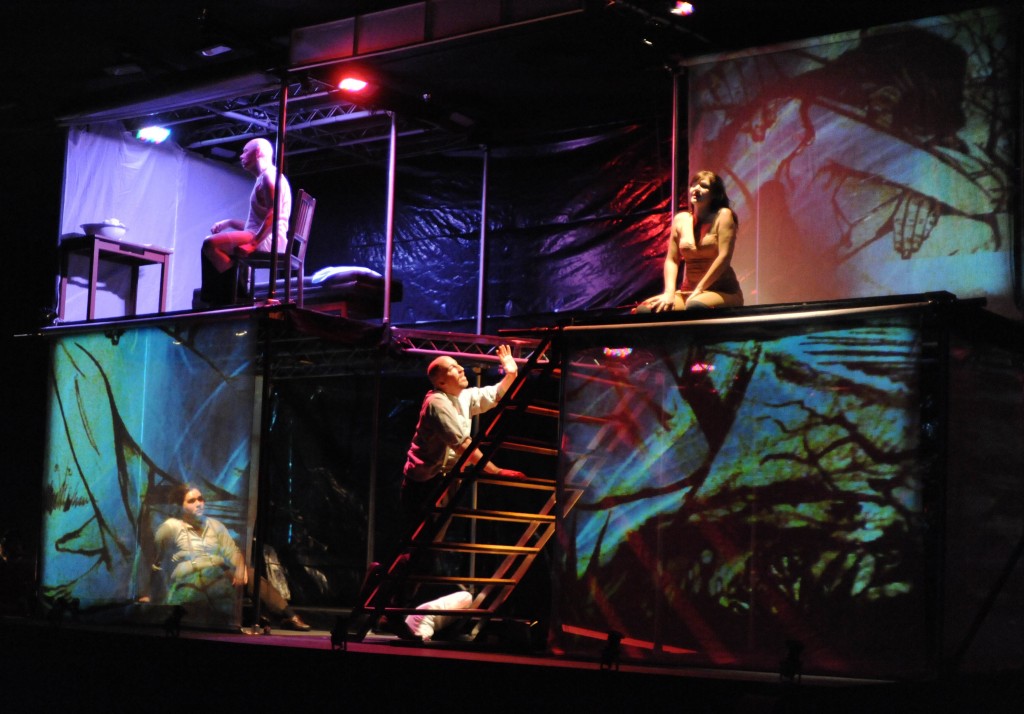 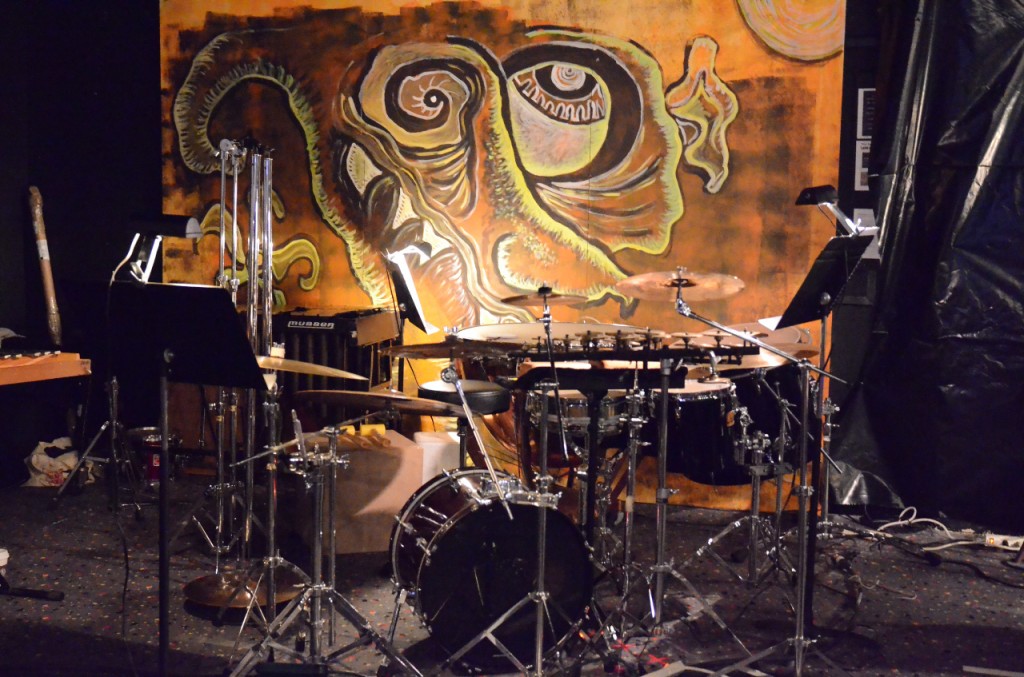 “Waiting for the Throbbing to Begin” by Doris Koplik