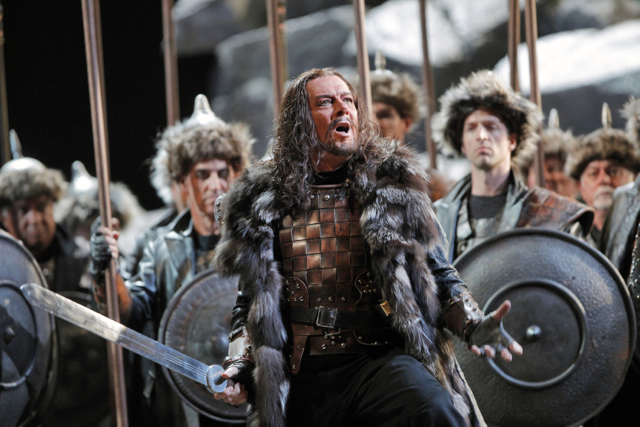 After 25 years on the job and leading the chorus in more than 300 productions, Robertson — the pride of Scotland — stood on the stage to receive the honor after grand crowd scenes with a cast of 135, including 60 adult and 16 children choristers, provided some of the highlights of the opera. Robertson’s chorus shone even brighter in last week’s premiere of John Adams’ Nixon in China.

Attila is a La Scala-San Francisco coproduction, making its first U.S. appearance tonight under the baton of Nicola Luisotti, who also led the Milan premiere, and featuring Ferruccio Furlanetto in the title role in both cities.

It also marked Jack Palance’s operatic debut — just one of its many quirks. This is a pleasant enough production — directed by Gabriele Lavia and designed by Alessandro Camera — but perhaps puzzling to the woebegone who can’t separate opera and logic.

Act 1 takes place in “authentic” 5th century environment, with ruins all around and bodies impaled on high. Act 2 moves to an abandoned opera house, perhaps late 19th century. In Act 3, the opera house is used as a run-down movie theater, attention wandering from the singers to the big screen upstage where Palance holds forth as Attila, in the 1954 Sign of the Pagan. 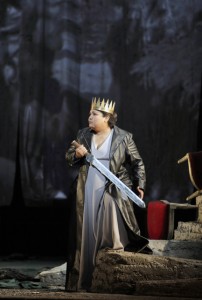 Here’s the puzzle that may bother pedestrian opera fans: during the time travel of a millennium, characters, costumes, and the Solera-Piave libretto don’t change an iota. How can that be? Well, it’s “only an opera,” isn’t it?

As to the music, it’s melodious and lovely, but except for a few bright spots, Luisotti’s passionate work in the pit, Robertson’s chorus, outstanding performances by Furlanetto and Quinn Kelsey (Ezio), the opera from the 33-year-old composer sounds more Verdiesque than Verdi.

But, confessing to being impressionable, when the whole cast spread out on stage, Pope Leo (Samuel Ramey in possibly the shortest role of his career) leading a procession right out of the “Tosca” Te Deum into the massive phalanx of uniformed barbarians, that was definitely a scene rivaling the arrival of Nixon’s Air Force One. (If “Attila” had a fourth act, a plane might have shown up.)

Nathaniel Peake’s Uldino and Diego Torre’s Foresto were fine, the latter gaining strength as the (short) evening went on. Lucrecia Garcia’s Odabella had more power than beauty, and clearly the debuting artist was still getting used to her new environment. For the fashion critics in the audience, the novelty was her floor-length (barbarian or “The Matrix”?) leather coat over her wedding dress.

Except for only one other San Francisco Opera production, in 1991, Attila was seen here in 1859 when a traveling Italian company performed it. That was the year of discovering silver in them thar hills, replacing the fading gold boom. The same time, real-estate broker Joshua Norton had a nervous breakdown, and declared himself Emperor Norton I… but that’s another opera. 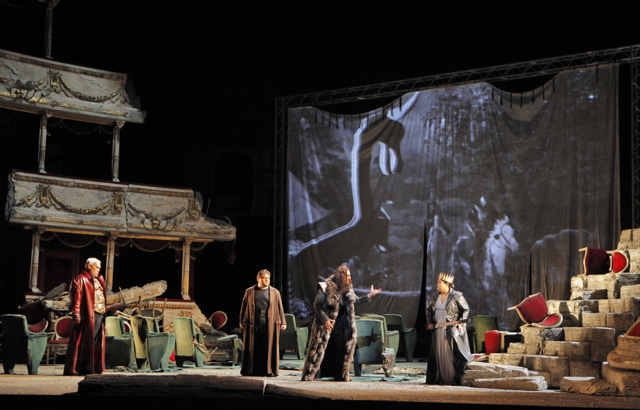 For tickets and more information