First of all, Handel’s Radamisto may be the greatest opera ever written to treat the military conflicts of Armenia and Thrace in 51 AD (or as the PC must say these days, BCE). I jest only slightly here about the plot. The libretto by Nicola Francesco Haym uses material recycled from something else we’ve never heard of.

Unsurprisingly, Handel lavishes his obscure subject matter with one beautiful ABA aria after another, relieving his Italian opera seria style all too infrequently with any duets or choral work – which is a shame, really, since Handel brilliantly excels at writing the latter. However, during this apparently endless ongoing Handel revival which began almost by accident in the 1960s with a New York City Opera production of Giulio Cesare featuring Beverly Sills as Cleopatra, we have become endeared to the rather tedious format of one formal aria after another, and we do not bat an eye when it’s a countertenor singing them. Indeed countertenors have become something of a worldwide industry. 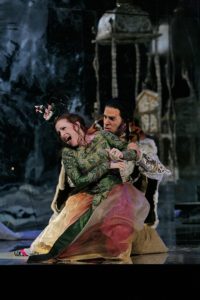 Among the very best of these onetime odd ducks is David Daniels, a fine musician and actor whose apparent goal is to sing everything written for castrati and countertenors. No doubt he’ll succeed. Right now he’s in Santa Fe singing the title lead in Radamisto. He’s fabulous. No surprise here.

This is certainly the first time I have ever seen a live performance of the opera, but I will have to wait until some other production to judge fairly the dramatic effectiveness of Handel’s work. One of the reigning kings of Regietheatre, David Alden, has worked his usual obfuscatory wonders on it all. Of course, if one reads enough supplementary literature or attends a pre-performance lecture or two, what Alden is up to is no longer especially baffling.

It does, however, look silly under any circumstances. In the first act we get black plaster ravens and a hideous wallpaper design that comes to life, so to speak, as the main characters seem to emerge from it. It’s a new take on the phrase “wallpaper music,” but one prays that is not Alden’s opinion of Handel. The second act is more opulent, with stuffed peacocks, curved reflective surfaces, some different more-attractive wallpaper, and some truly sumptuous costumes – especially those designed (by Gideon Davey) for the treacherous Tiridate (sung by Luca Pisaroni, one of the latest crop of hunky bass-baritones. This one hails from Venezuela.) The production is full of plaster or stuffed beasts, strange looking warriors, and people rolling around or mopping up the stage floor. It might be fun to see an 18th-century version where things would doubtlessly be even more fantastic.

The singing is uniformly excellent – and only those listeners with some extreme fixation on allegedly authentic Handelian vocalism could object. Someone told me Luca Pisaroni was perfectly awful, but I found him quite satisfactory. If I had any objection at all, it was to the way Alden has instructed him to stalk the stage while assuming exaggerated German expressionist/silent movie gestures. There was also a hint of Ming the Magnificent, Ruler of the Planet Mongo and the Universe. Figaro earlier this season, Pisaroni is a talent to watch.

Mezzo soprano Deborah Domanski, an alluring and wonderfully talented SFO apprentice singer, has been doing the role of Zenobia, Radamisto’s wife (replacing mezzo Christine Rice), and she is an amazing creature. Singing in the sweetest of tones and with meticulous style, she simultaneously exemplifies the ideal Oriental maiden with colorful spangles and a bare midriff.

The small cast – six characters in all – is rounded out superbly by fabulous American soprano Laura Claycomb, singing beautifully and making the most of her campy role as Polissena, distracted daughter of Farasmane, King of Thrace — the excellent American bass baritone Kevin Murphy often looking like a comic nailed-to-the wall prisoner from a Monty Python or Mel Brooks movie. Sporting absurd male drag with a red fez, Heidi Stober sang her heart out (to warm audience applause) as Tigrane, Prince of Pontus.

The fine orchestral performance was conducted by Harry Bicket. And if the opera’s numbers had not been cut back, it might still be going on this morning.