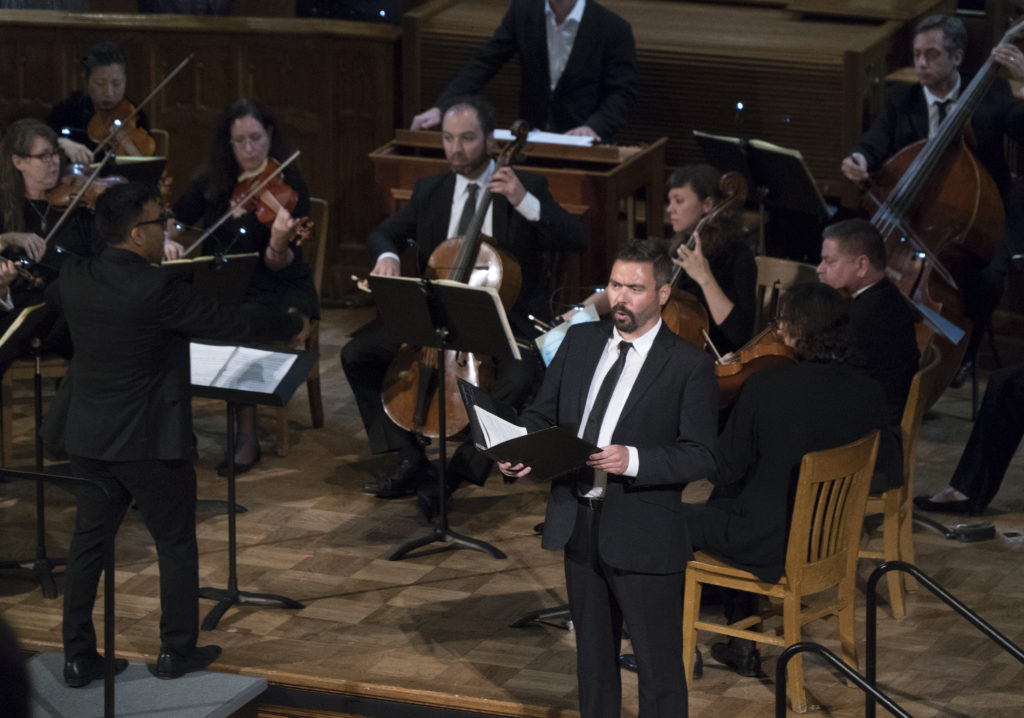 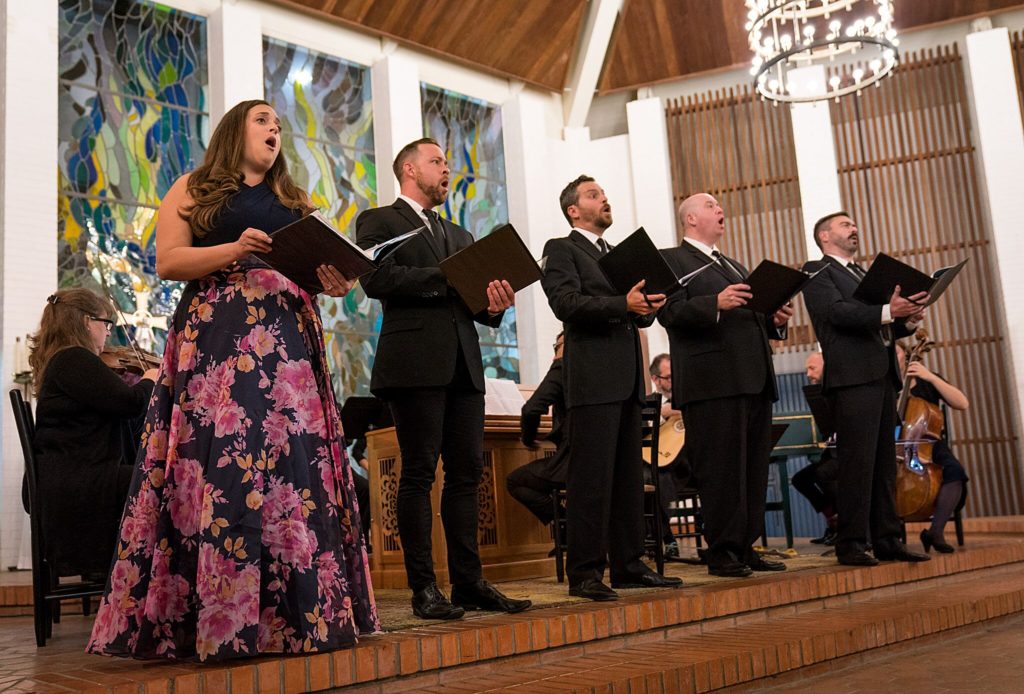 “Oh, the pleasure of the plains!
Happy nymphs and happy swains,
Harmless, merry, free and gay,
Dance and sport the hours away.”

Yet in the midst of all this Anglo-Greco pastoral bliss, things do not go well for the shepherd, Acis, who is in love with the semi-divine (literally) Galatea. Ovid, in his Metamorphoses, describes this shepherdess as a sea-nymph, the most beautiful of all Poseidon’s water sprites. Poor Acis has a formidable rival in the Cyclops, the monster Polyphemus, who finds Galatea to be “ruddier than the cherry, sweeter than the berry” and brighter than the full moon. Out of pure jealousy and rage, he kills Acis. But all the drama may be said to resolve happily when Galatea transforms her lover into an immortal fountain.

It’s not entirely clear to me how the shepherd Corydon figures into all of this, but Acis’s pal, Damon, comments on the proceedings in the manner of a Greek chorus, and in some quaintly lovely verses. Corydon may be taken as Damon’s double, although he was sung by another tenor on this occasion. The Bach Collegium San Diego provided a full libretto with its printed program, but I could not see there how Corydon’s contributions could be distinguished from Damon’s. The more familiar 1739 two-act version of Handel’s charming little opera does not contain this character at all. Perhaps the most famous recording of the piece is from 1959 and features Joan Sutherland, Peter Pears, David Galliver, and Owen Brannigan, with the Philomusica of London under the direction of Sir Adrian Boult. It was a LP set on the exotically named label, Éditions de l’Oiseau-Lyre, a division of London/Decca. Today there is a more up-to-date performance practice recording of the 1718 version with John Eliot Gardiner — and I have provided a You Tube link to that at the bottom of this page. 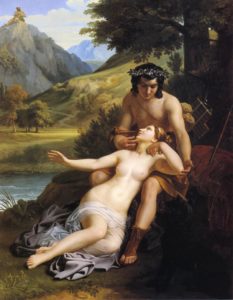 The Loves of Acis and Galatea by Alexandre Charles Guillemot (1827). Public Domain (from Wikipedia)

The Bach Collegium, of course, plays with careful attention to historical details once thought unimportant in the dark ages of my youth. The musical textures of last night’s performance were vividly colored by the sounds of oboes and recorders, played expertly by the apparently untiring Kathryn Montoya and Stephen Bard. Conductor Ruben Valenzuela led his fine troupe of dedicated musicians while seated at an organ center stage. Daniel Zuluaga deftly switched between his theorbo and guitar while Michael Sponseller commanded the harpsichord. We even had a fine bassoonist, Sally Jackson. There were just enough strings to hold things neatly together. Janet Strauss and and Susan Feldman (violins), Shanon Zusman (violone) , and Heather Vorwerck (cello). Hearing these players in a intimate concert setting was pure pleasure — despite the uncomfortable church pews.

Handel offers several moments of playful musical interaction with the winds. At an early point in the opera, Galatea wants all the high register twittering to shut up: “Hush, ye pretty warbling quire! Your thrilling strains / Awake my pains, / And kindle fierce desire.” Soprano Teresa Wakim. who delighted all evening with her agile and sweet sounding lyricism, added some personality to this passage, lifting her finger to shush the birds and having fun with the role. The ridiculously wicked Polyphemus is also competing with a chirping sopranino recorder which mocks his braggadocio. Baritone Mischa Bouvier leant the part a rich, commanding voice, but one could have wished for him to have more fun with the music. Owen Brannigan is a comic delight on the old Decca recording, giving some vocal moments an absurd swagger. Bouvier seemed to have caught something in his throat at a few points, but he charged forward with this challenging music with determined professionalism.

Tenor Derek Chester was a thoroughly charming Acis. It would be nice to hear him in a fully staged version of the opera. He too, however, displayed a faint vocal hoarseness from time to time. TweedleDamon (tenor John Russell) and TweedleCorydon (Matthew Tresler) pleased mightily in their arias. And everybody sounded great when they came together to sing as a chorus. To hear all the separate voices distinctly and yet as a polished unit is one of the great pleasures of a live concert performance in truly living stereo.

The Bach Collegium San Diego is a local treasure. Find out more about it here.  And they also have a presence on You Tube. I recommend a subscription to YouTubeRed to suppress all the commercials. It’s well worth it for lovers of classical music.

Acis and Galatea plays again Saturday, October 21, at Saints Constantine and Helen Greek Orthodox Church, Cardiff. Arts educator Nic Reveles will explain everything just before the concert. Wish we could have heard him last night in Point Loma. 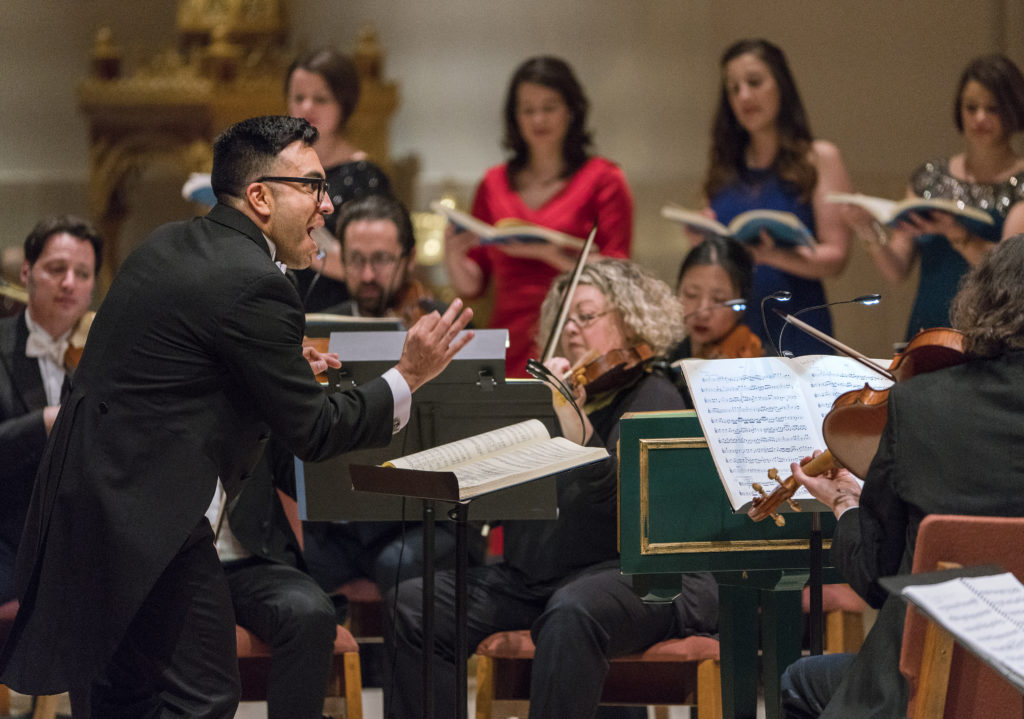 A recording of the 1718 version is on You Tube.
Handel: Acis and Galatea (1718 version). Burrowes, Rolfe Johnson, Hill, White, Gardiner