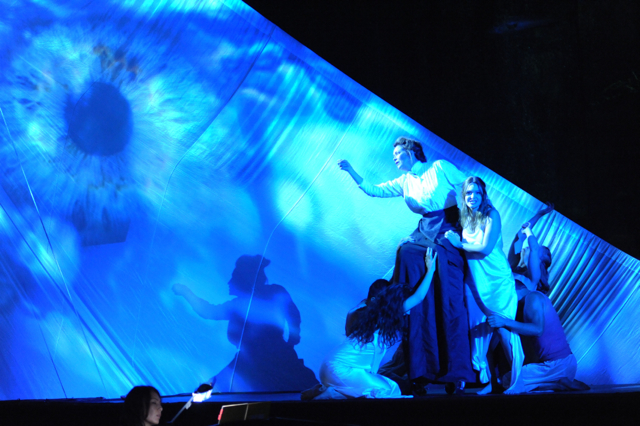 Review of “The Paper Nautilus” by David Gregson as seen Saturday, September 8

A memorable passage in Marcel Proust’s monumental novel “In Search of Lost Time” (“À la recherche du temps perdu”) describes a beachside hotel dining room as “an immense and wonderful aquarium” stocked full of wealthy people who appear as a variegated assortment of strange fish and exotic mollusks. Only a glass panel separates these weird sea creatures from a crowd of amazed village folk peering in from outside. Proust (or more accurately, the book’s narrator) worries that one day this panel might shatter, letting in the gloating onlookers who just might hook some of these amazing aquatic beasts for their kitchen pots.

Such images flooded my mind Saturday as I took my front-row seat in Long Beach’s Aquarium of the Pacific for a performance of Gavin Bryar’s beautiful “The Paper Nautilus,” not an opera, really, but a sort of staged and choreographed song-cycle for soprano, mezzo-soprano, dancers, two pianos and a sizable percussion ensemble. I do not see myself as a “swell,” nor do Long Beach Opera’s loyal followers ever strike me as self-satisfied snobs congratulating themselves on supporting “high kultcha,” but who knows what the fish were thinking? Looming in front of us was the giant tank of the aquarium’s entrance hall — and even though our vast submarine view was kept dark throughout most of the 60-minute long performance, one sensed the fishes observing the odd human antics going on below them.

Sitting there in a room of mysteriously changing illumination (created by lighting designer Dan Weingarten and his associates) and gazing at the tank, partly obscured by a white curtain that slashed diagonally across my viewpoint, I also thought somewhat absurdly of one of my earliest movie-going experiences, Esther Williams’ “Million Dollar Mermaid” (1952), an MGM biopic about Australian swimming champion Annette Kellerman — coincidentally a one-time Long Beach resident who operated a health food store there. If the movie could be credited for accuracy (which it can’t), Kellerman was seriously injured at New York’s Hipppdrome when a giant glass tank in which she was performing an underwater ballet, suddenly cracked open, spilling her and eight thousand gallons of water on the spectators. As a child, I was hypnotized in horror as the crack began to sneak its way across the glass — and then the inevitable disaster. 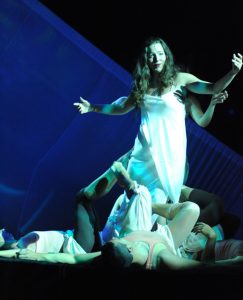 But, fortunately, my mental associations Saturday evening went in other more relevant directions as well. This Bryars piece, an irresistible reworking of material from “The CIVIL warS,” an aborted collaborative multimedia project that included composer Philip Glass and designer/director Robert Wilson, evoked for me the songs of Henri Duparc and other great French art song composers, while simultaneously exploring the more magical and lyrical aspects of that style somewhat incorrectly identified as “minimalist.” The program book credits the texts to Marie Curie, Ethel Adnan, Pope Leo XIII, the Vulgate, Jackie Kay and the English Bible — and a link to these works can be found right here:  The poems take one down, down, ever lower into the sea, and at the end of the work, the tank at last streams with light, revealing streams of bubbles and the denizens of the deep.

Although the poems are metaphysical in the extreme, Madame Curie brings a scientific eye to bear:

“I am among those who think that Science has great beauty. A scientist in his laboratory is not merely a technician: he is also a child placed before natural phenomena that impress him like a fairy tale. We should not allow ourselves to believe that all scientific progress can be reduced to mechanisms, machines, gears, which indeed have their own beauty. I do not believe either that in our world, the spirit of adventure is likely to disappear if I see something important around me, it is exactly this spirit of adventure that seems ineradicable and linked with curiosity.”

Then the texts envelope our bodies in water; they contemplate the physical self, the sun and the brain; they evoke the Lord; they explore loneliness in hidden pearls; they personify the ocean and the lives it holds, even the fishermen; they meditate on the moon and darkness; and at last plunge into oblivion and/or eternal life. 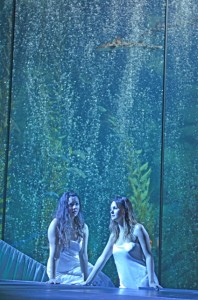 All in all, it was a mesmerizing performance that brought together two exceptionally beautiful voices and wonderful stage performers — soprano Ashley Knight and mezzo-soprano Peabody Southwell — as well as the elevated (literally) and imposing presence of Suzan Hanson in the speaking part of Madame Curie. Enormous credit is due to all the creative personalities listed below, especially conductor Benjamin Makino (who was invisible to me except via a small TV monitor I spied), and director/concept and production designer, Andreas Mitisek, the source from which all good things flow in Long Beach. I also found the work of choreographer Nannette Brodie and her dancers to be gorgeous in its simplicity, its fluid movement and in the pleasing architecture of its posed stage pictures. Bob Christian’s remarkable sound designs complemented the intriguing visual imagery of Adam Flemming’s lovely projections, most of which were fraught with obscure meaning relating to the poems. The percussion ensemble, so varied and interesting in the sounds it produced, featured the excellent players you will also find named at the bottom of this review.

When all was done, the entire audience was invited “backstage” into the aquarium to menace the sharks with the possibility of spilled glasses of wine or carelessly fumbled cheese cubes — but I think the fishes emerged totally unscathed and nobody fell into the pool with the giant black circular rays, although some petting of these fantastic creatures, seeming to me like floating panels of back velvet, did take place. 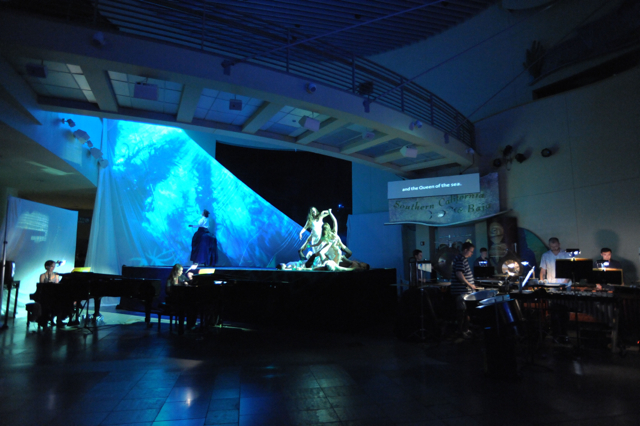 Production rehearsal. Note dark fish tank in photo by Keith Ian Polakoff. Madame Curie is on stage at left. You can see the layout for pianos and percussion.