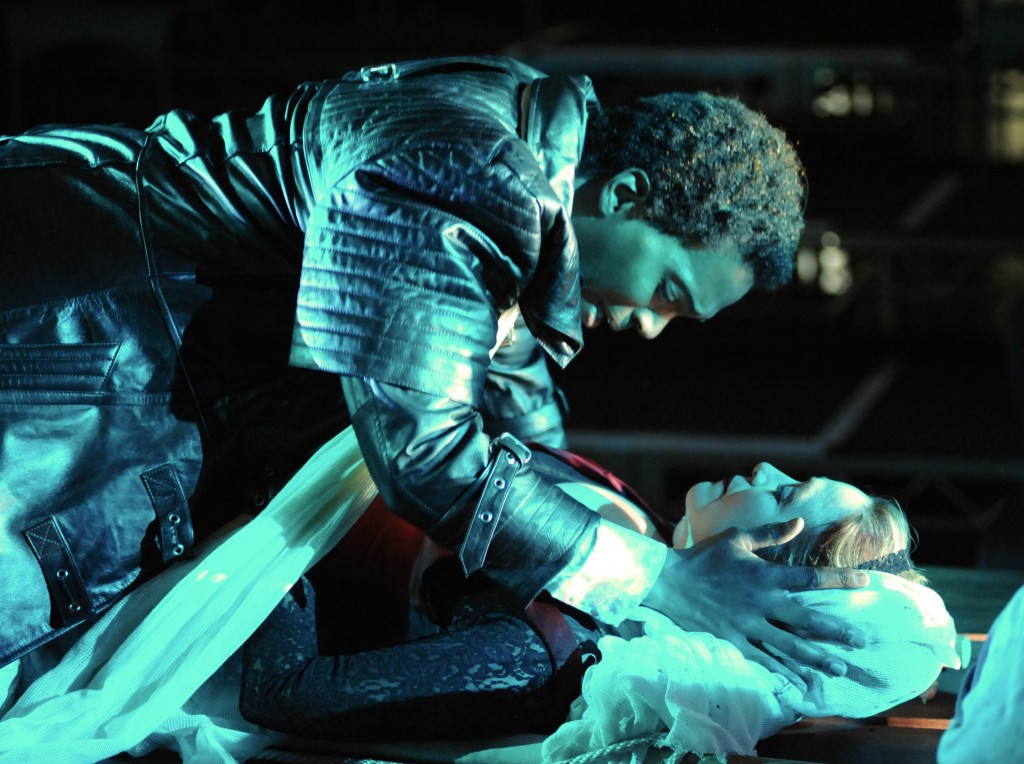 Entering the carefully enclosed area that was to serve as the performance space for Ernest Bloch’s rarely performed opera, Macbeth, I found myself seated at that fateful wooden dinner table in Cawdor Castle where its guilt-ridden lord and his murderous spouse contended with an unexpected guest: the specter of the recently murdered Banquo. I should say “virtually seated,” for my assigned chair was A-1, perhaps two feet away from the lengthy dining table itself, and as the evening progressed, I constantly had to move my feet to keep from tripping up the performers. This was a singular experience for me in a lifetime of theater going. I have been in front rows and quite close up to the action many times before, but never this close! I felt as if I might be expected to leap up and stab somebody or give Lady Macbeth a punch in the jaw.

The venue was as unique as everything else about this memorable evening, both as a personal experience and a public event. One first had to figure out the driving directions to Berth 92 near the battleship USS Iowa — and then pass through various confusing security checks and parking ticket purchases before making it to the World Cruise Center, Port of Los Angeles, San Pedro. Once inside the building, a seemingly small speck of the vastness had been turned into a theater. It was long and linear, flanked by tiered bleacher seating on two sides. The table was dead center, and strange blobs of bloody linen and furniture were placed at both ends. At the far end of this hall and obscured by a darkly translucent curtain was the Long Beach Opera Orchestra, about 32 players in all, plus a chorus comprised of the Camerata Singers of Long Beach, 40 strong.

Just before the LBO’s artistic and general director, Andreas Mitisek, took up the microphone to make one of his usual droll fund-raising speeches (this one containing the classic line, “Is this a check I see before me?”), he passed by seat A-1. In our exchange of pleasantries, I made a lame joke about being seated at the same table with Banquo’s ghost — and his reply, reinforced by a mischievous twinkle in his eyes, suggested that was exactly the point. We were all about to be  “guests” at this ghastly party: and that was precisely the governing concept of the production. As things turned out, it was a little like being in one of those Halloween house of horrors where costumed demons get right in your face as they try to scare you. Banquo, Duncan, Malcolm, and Macduff were, all of them, already dead and made up to look like ghosts. Hissing witches were all over me it seemed (but they hissed and writhed a bit too much for my dreadful pleasure), and the dramatic action was swallowing me up. Only the two leads, Macbeth and his lady, were spared the ghostly greasepaint — and this too was deliberate. Rarely have these two characters seemed so human to me — a tribute to the two superb lead singers.

But before discussing these two artists, it needs to be said, when one is plunged into the center of the action whilst the orchestral players are in another room so to speak, judging balances between the voices and the instrumental players is not a viable exercise. For me, Bloch’s romantic score (1910), with the usual expected influences (especially Debussy), became almost a secondary consideration — yet I had prepped on it before coming to the performance (using the Montpellier recording sung in French), and I could tell the execution of the music under conductor Benjamin Makino was sensitive, energetic and intellectually committed, though regrettably far from polished. More money and time … more money and time! On the other hand, it would be difficult to improve on the performances of baritone Nmon Ford as Macbeth and soprano Suzan Hanson as the woman who dares do more than doth become a man. 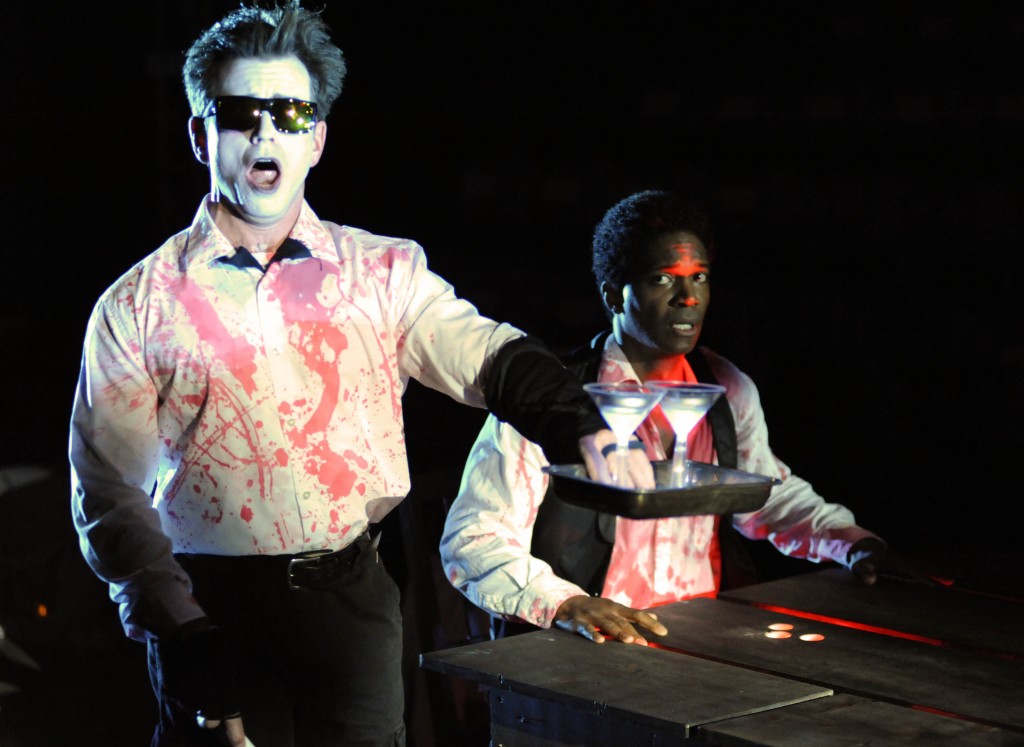 Ford impressed me in a way few singers have in recent years. His thorough command of a role which is totally out of the standard repertory and probably an amazing pain to memorize just for a few performances, not to mention act and sing, was astounding. Few Shakespearean actors have been able to take this part and imbue it with genuine sympathy and compassion, but Ford gives us a fully realized human being. One totally believes in him as a handsome, promising, amazing young man driven by a lust for power (and his wife!), but who has a fatal flaw: his conscience and basic humanity. Ford is gifted in so many ways it hurts. He has stunning good looks, great physical conditioning, a vocal timbre that only comes as a gift from whatever forces govern the earth, a mind that can grasp what he’s doing, an instinct for putting words and music together, and plenty of lung power. I can imagine hearing both him (and Suzan Hanson, may I say yet again in yet another review) in a much larger venue. Like an actual opera house for instance.

This performance was one of the only ones in recent memory where I found glancing at the supertitles totally unnecessary. Of course, my proximity and the excellent diction of the singers had much to do with this, but I really need to say that in 1950 when composer Ernest Bloch (many of whose relations were in attendance at this performance) teamed up with writer Alex Cohen, he transformed a French language opera into an English language one with a flawless instinct as to how the text should be set. Much of it is taken directly from the original play, and all of it is put to music with a superlative melding of sense, poetry and musical line. That said, the perfectly shaped vocal lines do not beguile with the same force of the orchestral and choral music. The later is mysterious, evocative and loaded with memorable bits of melody. I was amused, by the way, to hear little Wagnerian rumbles here and there, straight out of “The Ring,” but I would not say the score is excessively derivative. Bloch has, as critics often like to say, “his own voice.”

I have long been an admirer of Suzan Hanson and have wondered why she doesn’t have a bigger career (whatever that means), but this multi-talented actor/writer/singer/fill-in-the-blank has a juicy role here, thanks to Mr. Bloch and Mr. Shakespeare, and it’s also a sexy one. She has what it takes to appear to get it on with an official “barihunk,” and director Mitisek (never too shy for such things) gives us lots of lusty interaction including an alarming bit of simulated intercourse in which I was certain Hanson had her head smashed into the table. I would hate to see one of LBO’s treasures get put out of commission in such a fashion!

The witches — Ariel Pisturino, Daniellle Marcelle Bond, and Nandani Sinha — sang together superbly, although their hissing and writhing about became wearying very quickly. If you’re a bunch of prophetic hags, I guess it’s hard to tone it down. Talented tenor Doug Jones seemed to be playing everybody else in the play except Macduff, and Jones was very good it. I was tempted to pat him on the back or yank at his Banquo bandages, but I restrained myself. Robin Buck was both the welcome Macduff and a detestable murderer. The clever lighting that came from every which way (even out of little holes in the table) was by Dan Weingarten. Mitisek did the clever production design, and if Hanson had sneaked up just a little closer, I might have read the washing instructions label popping up on the back of her black lace body stocking. The canny costume designer’s name eludes me in the program (but it may be the “coordinator” Nicholas Pilapil.) I loved Macbeth’s huge black leather coat, although such things (along with sunglasses) have become something of a postmodern production cliché.

The music of Ernest Bloch is not as well known these days as it should be, and this is his only opera. It’s actually a very effective piece of writing, but I, like most opera lovers, am unlikely to encounter it again. LBO can chalk this one up as another of its brave and successful ventures. It travels to Chicago in September and will almost certainly enjoy a big success there.

Those who wish to learn more about Bloch will find a great deal of interesting and useful information at the Long Beach Opera website.

Postscripts. Mitisek had the inspiration to bring out the body of Lady Macbeth just before our anti-hero’s demise at the hands of Macduff. Shakespeare dismisses her, it seems to me, a little too blithely. I liked the touch of bringing her back for Macbeth to mourn, even if “She should have died hereafter.” I also really believed Ford when he sang, “I dare do all that may become a man; Who dares do more is none.” This is a crucial line, not only to this play: it is the key to the doom of the Renaissance “overreacher” who in attempting to dwell with the angels is hurled down to destruction.

I also find Bloch’s use of the chorus in the opera to be one of the secrets of its appeal. The Camerata deserved a bow. 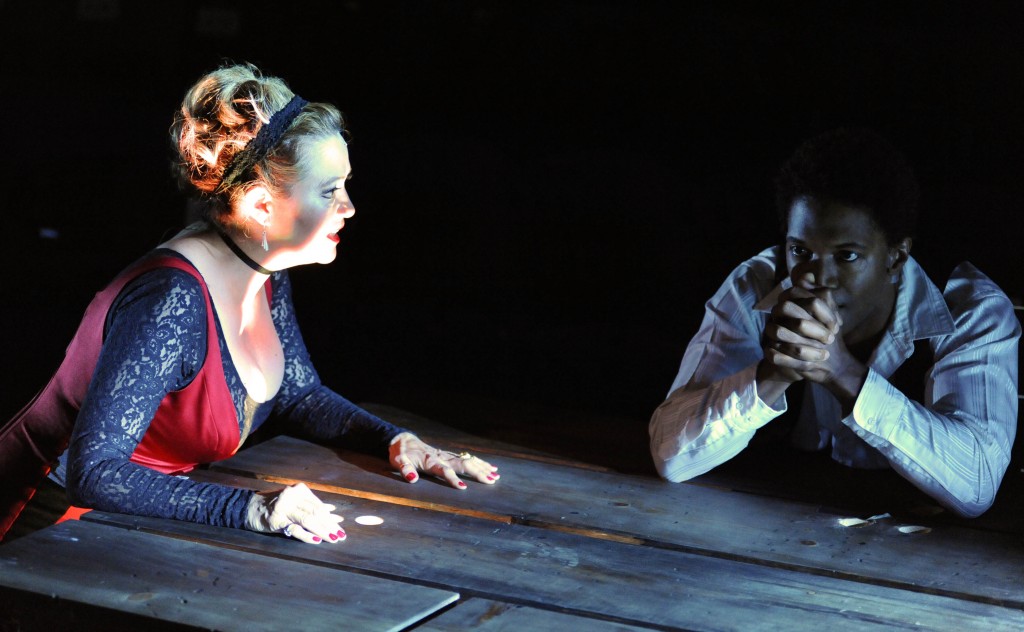 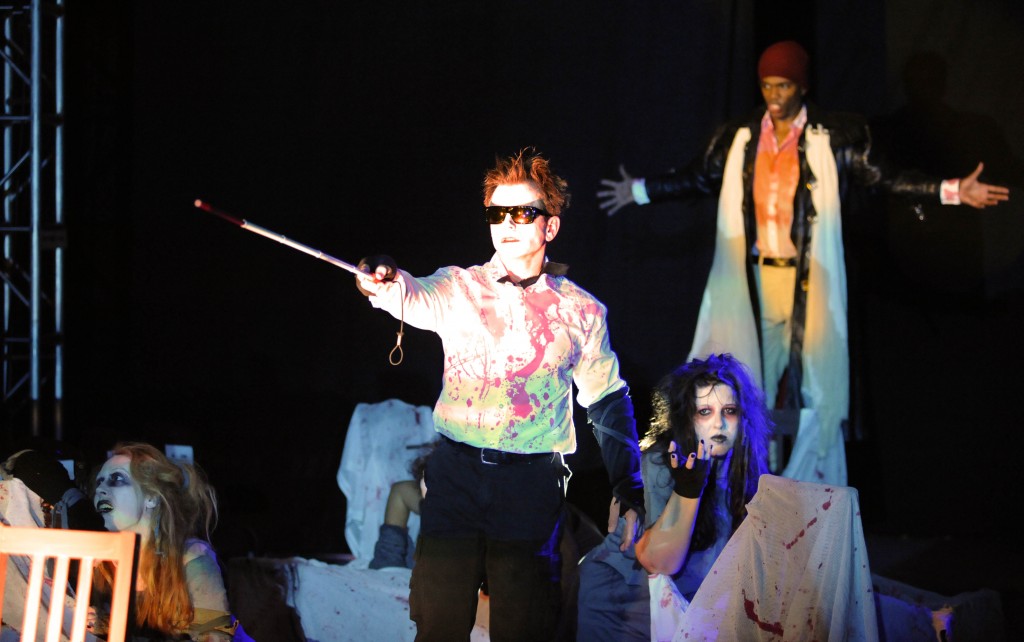