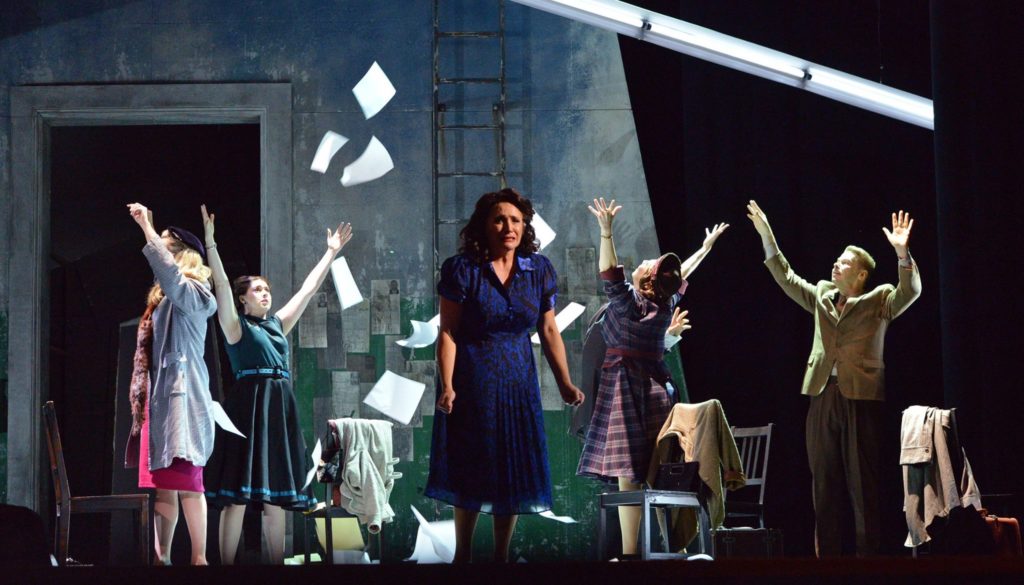 In Samuel Beckett’s Waiting for Godot, two characters, Vladimir and Etsragon, await the arrival of a man named Godot, but he never arrives. Many commentators feel that this famous play represents a quintessential 20th-century dilemma of defeated expectations in a world without spiritual meaning. Novelist and short story writer, Franz Kafka, is also held as a thinker whose works, the novels The Trial and The Castle and the story The Metamorphosis in particular, show the times mired in baffling and soul-destroying bureaucracy.

Today’s 65.6 million displaced immigrants and refugees may see this now as the quintessential 21st-century dilemma. Our current government’s growing hostility to these groups is intensifying and will no doubt drive some desperate people to thoughts of suicide. It’s amazing to encounter a mid-20th-century American opera that addresses this problem with such profound compassion — a deep empathy we are unlikely ever to encounter in tweets from the White House. I once thought Gian Carlo Menotti’s first full-length opera, The Consul, was contrived and derivative, but no more.

The Long Beach Opera has just completed a sadly under-attended production of The Consul that featured one of the world’s greatest sopranos, Patricia Racette. The event was held three times in an excellent but obscure (to many) venue, the Centinela Valley Center for the Arts in Lawndale. Those who failed to seek it out will come to regret having missed one of the very finest things the LBO has done in years — and I speak as someone who has been attending for longer than I can accurately remember. Everything clicked across the board — singing, stage direction, orchestral playing, set design, and lighting. Chicago Opera Theater audiences can look forward to seeing this when it moves there November 4, 10, and 12. 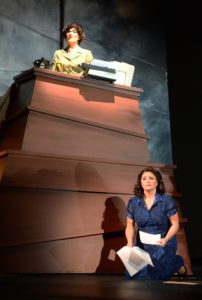 Audrey Babcock as The Secretary and Patrica Racette (R) as Magda in Menotti’s “The Consul” in Long Beach. Photo by Keith Ian Polokoff.

The action of the opera takes place in an imagined totalitarian state where Magda Sorel — sung by the brilliant dramatic soprano Patricia Racette at her very best — is trying to obtain papers to flee the country. She never succeeds, nor do a handful of other refugees superbly realized by a top-flight ensemble of LBO singers. Before the tragic finale, we learn a good deal about these people. The seemingly heartless secretary of the consulate who torments all the visa applicants with her cold indifference, turns out to be deeply disturbed by her own behavior. She too meets a sad end in this production. Mezzo-soprano Audrey Babcock is flawless in this part, chilling our blood before she reveals her vulnerability.

Complicating the plot is the fact that John Sorel, Magda’s husband, has fled the secret police and has crossed the border safely, although illegally. He has left behind not only his wife but his mother — in a commanding and deeply affecting realization by powerful mezzo-soprano, Victoria Livengood — and his ailing child who eventually dies. He is captured coming back across the border to see what he can do. John’s plight was superbly realized in bass-baritone Justin Ryan’s frantic portrayal.

Among the impressive voices and characterizations was bass-baritone Cedric Berry’s Secret Police Agent, calm and snake-like as if he had popped out of a film noir. Comic relief, if such a tension-filled drama can be said to have any at all, was supplied by tenor Nathan Granner who, as the magician Zika Magadoff, apparently acquired skills of prestidigitation for his actually delightful star turn. His behavior is declared “most irregular” by the consul secretary, but he hypnotizes the pathetic band in the dreary waiting room into believing they are in an enchanted ballroom. In this scene we experience one of many in the opera that shades into a world of magic realism. 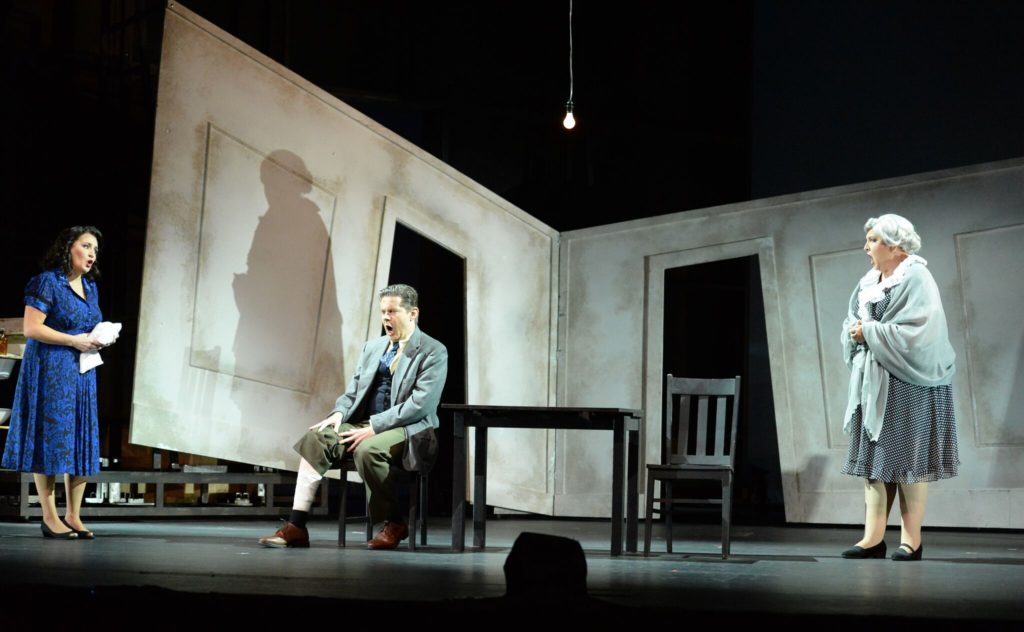 In fact, stage director Andreas Mitisek — who may add this to the list of his many fine achievements — has conceived The Consul as an expressionist drama, and an expressionism reminiscent of early German cinema dominates the conception of the stage design by Allan E. Muraoka. The Secretary sits atop a towering and virtually inaccessible desk, and doors and windows go askew. Mitisek offers some of his best and most evocative ideas to the stage action. The refugees slowly entering while drawing black wooden chairs behind them has a tragic force. In the final scenes, these chairs come to represent the refugees themselves as the chairs soar off into the heavens in a symbolic vision of mass suicides. A single illuminated rope — death and transcendence — falls down to Magda standing on her chair. One visual note that goes an unnecessary step too far for me in this conception is Magda wrapping the rope around her neck before the final curtain. The notion of transcendence is cancelled out by the literal gesture.

Who knew that Menotti, so often dismissed as a lightweight composer who failed to become a disciple of the academic atonality and serialism that dominated the beginning and middle of the 20th-century, could pack such a wallop in 2017? His score is infused with a genuine compassion for his characters, and you can feel it in almost every note of the music. The composer’s melodic gift no longer seems old fashioned to me, but rings true — and as I have suggested above, reflects the sort of emotional involvement with the plight of refugees and immigrants which has gone dead in the Age of Trump. Menotti also writes with an Italianate feeling for vocal lines that you simply do not get from our best opera composers today, and I mean John Adams and Philip Glass, although I admire their works for other reasons. Menotti is also a skillful master of ensembles — clearly part of his heritage from Verdi and Puccini.

Menotti also seems to me to be a somewhat unsung “magic realist”. The Magician sequence and Magda’s dream sequence take the piece out of “realism” into what might be said to be surrealistic at the very least. Menotti also has an unerring feel for the dramatic.

Sunday’s audience, I am told, was the largest this production managed to attract, and many of them came on 50 percent ticket reductions. If they had not realized before they came there that Racette is one of the great singing actresses of our time, they knew it by the end of the second act when Magda has her famous scena, for many of us the best known passage of the opera. “To this we’ve come” it begins, and it looks as if we are still going there. This number was met by the longest ovation the crowd could muster. No doubt many hearts were moved as deeply as my own. Immigrants and refugees are not merely statistics, but human beings. Racette and Menotti let us know that.

The “minor characters,” all of which I have listed below, were superbly cast — and the conducting of the LBO orchestra by Kristof Van Gyrsperre helped propel the considerable emotional and dramatic power of this remarkable and unforgettable production.

To This We’ve Come video with Patricia Neway 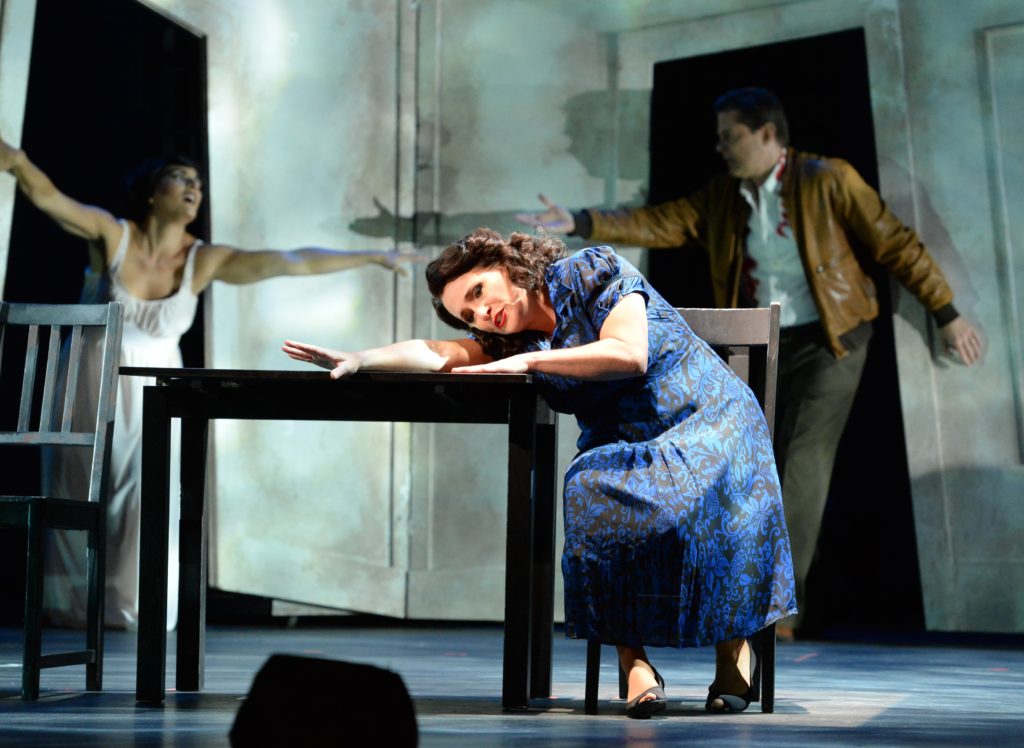 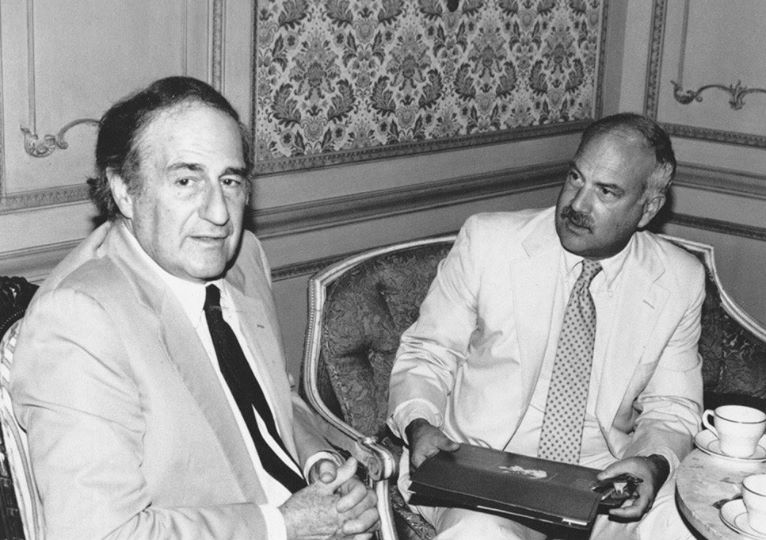 Gian Carlo Menotti and I many, many years ago. Photo from the San Diego Union newspaper.