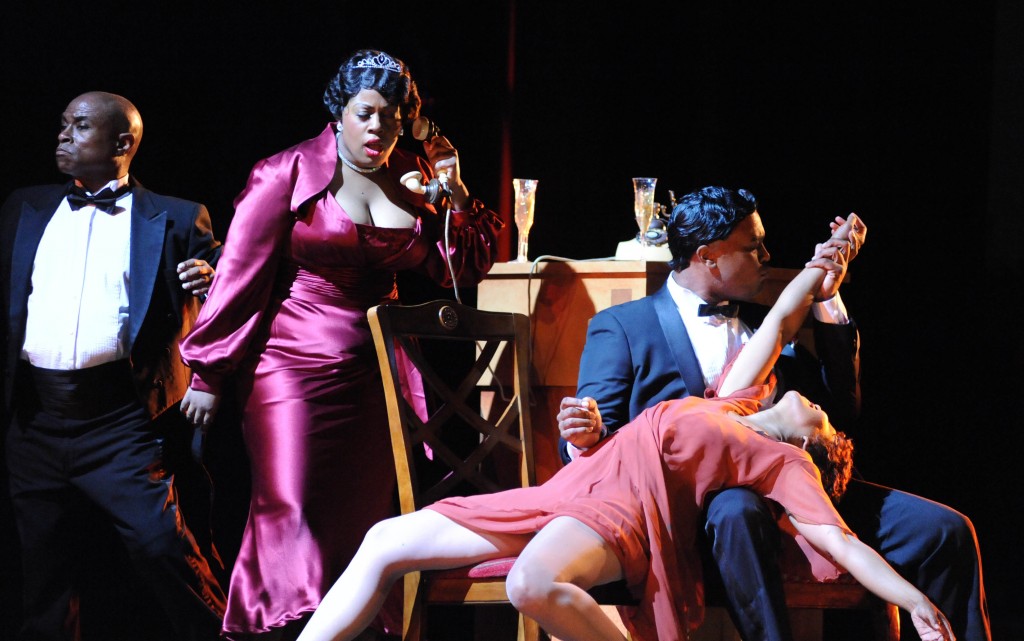 Inspired by the real-life story of the first female African American to become a self-made millionaire, and billed as “Duke Ellington’s only opera,” Queenie Pie is one of Long Beach Opera’s most intriguing projects to date — although any hyperbolic generalization along those lines is difficult to make in the case of a company that has been consistently pushing the envelope and attempting the impossible since it was established in 1979. Hardly anything offered by the LBO is ever business as usual.

Before the current artistic director, Andreas Mitisek, took over in 2004, his predecessor, Michael Milenski, had already turned the company into the darling of all critics and audiences who were heartily tired of the tried and true. Today the LBO’s many loyal followers, including myself, literally do not know what to expect next from season to season. Even the venues change, since the company is radically peripatetic. The places I have gone and the places I have seen! Swimming pools, aquariums, performing arts centers, the engine room of the Queen Mary, spaces in berth 92 of the USS Iowa, and mysterious repurposed warehouses.

Queenie Pie takes us to the wonderful old Warner Grand Theater, an art deco movie palace built in San Pedro in 1931. This is not the LBO’s first visit there, but last Saturday, as Queenie Pie was given its first public viewing, the fit of the show and venue was not as perfect as one might have wished. Ellington’s work, despite its claim to be an opera, resembles a jazzy Broadway show more than anything else I can think of, and it is not unusual for lovers of musicals to see Broadway touring companies end up on the stages of old movie theaters. We always naturally expect such shows to be highly polished.

Broadway touring shows are always amplified, and the electronic tech work can be complicated. The performers on stage need to hear each other as well as the band in the pit, the sonic balances need to be carefully worked out, and when crack professionals are involved, they usually achieve an acoustic coherence, albeit almost always too loud for my taste. 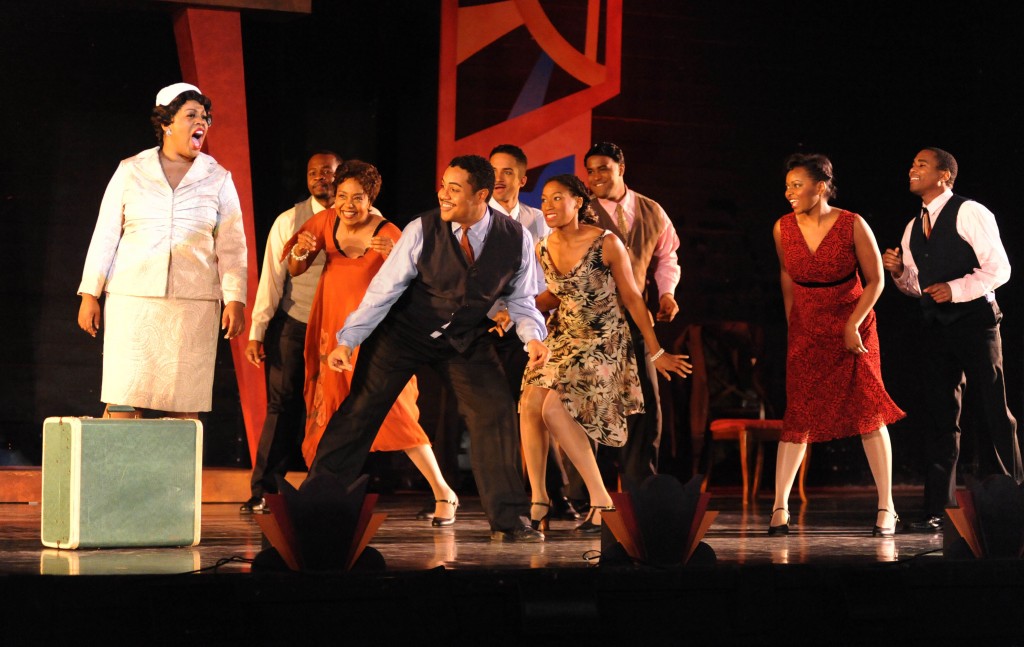 On opening night, LBO’s Queenie Pie, however, seemed plagued, especially during the first act, with technical problems. Even the pre-curtain remarks suffered from microphone drop-outs. The result was, to my ears at least, that the singers had a hard time finding their pitches and that the speech and musical levels were uneven. These tech problems were compounded by the fact that everybody involved could have used more generous rehearsal time. I am crossing my fingers that things go better during the next two performances (Sat. Feb 1, 2014 at 8 p.m. and Sun. Feb 2, 2014 at 2 p.m.) and during the show’s upcoming Chicago Opera Theater presentations in February and March.

Having dispensed now with the only major negatives, I can go on to the show itself. So much has been written about it already, even on Long Beach Opera’s own website , that anything I might write here will be painfully redundant. For prep work, I recommend Christian Hertzog’s recent piece for the LA Weekly. But, to sum it all up quickly, Queenie Pie is a Duke Ellington show as patched together and reimagined by others based on scraps of this and that: music, lyrics, lists, what have you. It’s like rebuilding a man from bits of bone, ashes and pot shards. For an opera critic, the reconstitution of the works of Monteverdi is easier to explain.

The Duke, always intrigued by the idea of an opera, began writing Queenie Pie in 1962 in fulfillment of a commission from the New York public TV station, WNET. But the station lost its funding, and then Ellington and his librettist, Betty McGettigan, never completed the project. Ellington died in 1974. Various cobbled-together versions have been presented since then in Philadelphia, Washington D.C., Brooklyn, Oakland, and Austin, Texas. A definitive version does not exist, nor is one possible. Perhaps a modern-day follower of Madam Blavatsky could work out a séance with the Duke himself. 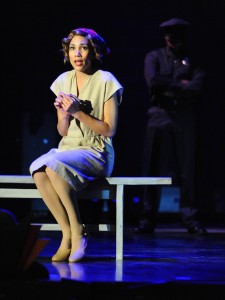 Ren Roht, director of the new LBO version, has taken the materials available to him and tried to make Queenie Pie, in his own words, “more resonant to current issues than the one presented at Kennedy Center almost thirty years ago.” Issues of intraracial colorism come front and center. The original story was apparently transformed by stage director George C. Wolfe and librettist George David Weiss into a tale of dark skin versus light skin and age versus youth, all of this embodied by the clash of a hugely successful cosmetics entrepreneur, Queenie Pie, and the youthful upstart, Café O’Lay, she of a milk-and-coffee complexion. Roht has taken up a subject perhaps only vaguely familiar to many lily-white Americans: that people of color, even today, are sometimes discriminated against and/or discriminate against each other on the basis of their precise shade of black or brown. It’s a big problem in India right now; and here in America, President Obama himself has sometimes found himself absurdly charged with being not black enough.

The time frame and locale for Queenie Pie is 1930s Harlem during the so-called Harlem Renaissance. The tonality of the show, however, is light hearted. The greatest poet of the Harlem Renaissance, and still revered today, is Langston Hughes, but his work is stinging and bitter when set up against the libretto of Queenie Pie, the first act of which takes place in New York city and is punctuated with numerous imagined singing TV commercials for beauty products. Although the act concludes with Café O’Lay accidentally shooting Queenie’s two-timing business manager, Holt Fay, and with Café ending up in prison, the feel of the story is not oppressive. The act is full of wonderful songs, and Queenie’s scat-singing when she answers her telephone is delicious. Karen Marie Richardson is ideal in the role, and she has great fun and makes the most of it. Anna Bowen’s Cafe O’Lay, both irritating and sympathetic, could hardly be more finely tuned vocally and dramatically. The ebullient singing and dancing ensemble of ten performers, for whose artful work Roht deserves much praise, may have had pitch problems, but they greatly energized the show with with their exuberance.

Because this is an opera website, readers may expect me to define vocal categories (soprano, mezzo-soprano etc.), but that is really not appropriate for this kind of show and this sort of music.

The second act of Queen Pie, probably the best musically and by far the most fun and exotic, takes place with Queenie in exile on a fantasy island where she enjoys an all-too-brief liaison with the island’s King, none other than Keithson Gipson who, perhaps symbolically, also had played Queenie’s lover, Holt, in the first act. The tropical romance doesn’t work out, however, because Queenie has first to discover who she really deep down inside. Then Café O’Lay shows up. With the predictable catty dialogue exchanges out of the way, the two women finally agree to be friends, although paradoxically, according to the lyrics, they don’t need nobody. In the final analysis, the libretto still needs something stronger to hold all the wonderful songs and musical excursions together. Perhaps this is really still a work in progress — not its ultimate final form.

Instrumental in manipulating the fates of these two independent ladies is Lil’ Daddy, the wonderfully entertaining Jeffrey Polk, who also plays the island’s witch doctor. In real life a man of many talents, Polk is widely known as a performer, teacher and choreographer. He rounds out the very strong cast. 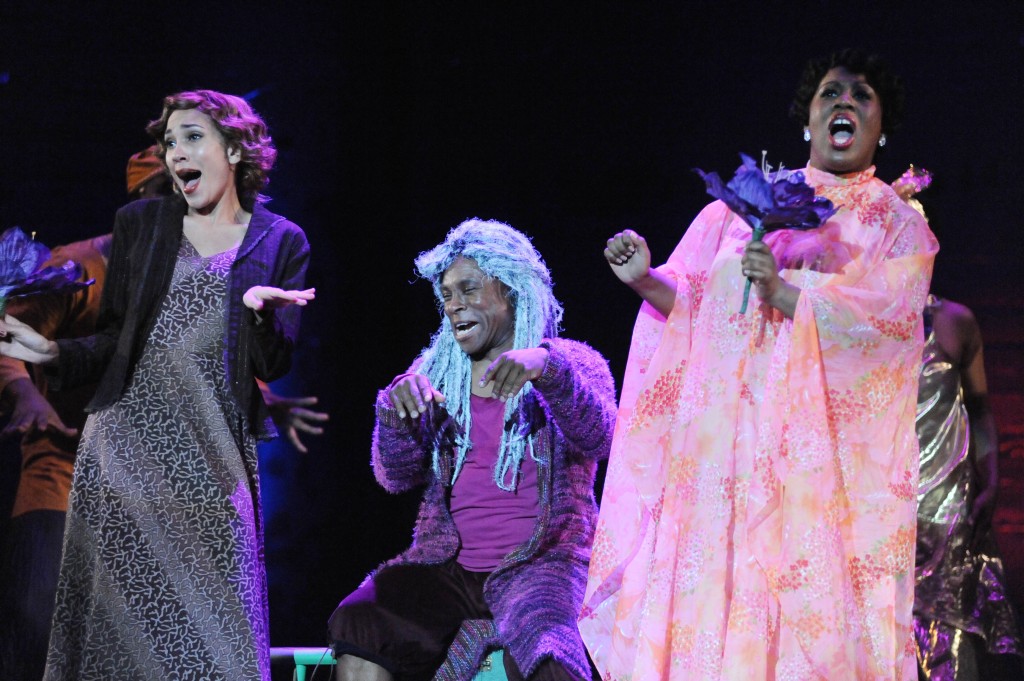 Danila Korogodsky’s set decorations are colorfully minimalist and stylistically hard to peg, but I thought I detected a Russian modernist inflection. It takes a lot of money that LBO does not have at the moment to make their set constructions substantially more elaborate. Lighting was skilfully managed by designer Brandon Baruch who had to content with a backstage wall that seemed smeared with tar. Dabney Ross Jones’s costumes were enjoyably sexy, fanciful and gave the whole show a nice jolt of pizzazz.

Things in the pit were lively thanks to the conductor, Chicago Jazz Orchestra Artistic Director Jeffrey Lindberg, and Kenny Burrell’s Los Angeles Jazz Orchestra Limited. Was the band too “tight”? Was it “loose,” more authentically in Ellington’s early style? Whether or not it sounded like a truly Duke Ellington band seems open to debate, but it was good enough for me.

The Warner Grand Theatre is a facility of the City of Los Angeles, operated by the Department of Cultural Affairs. 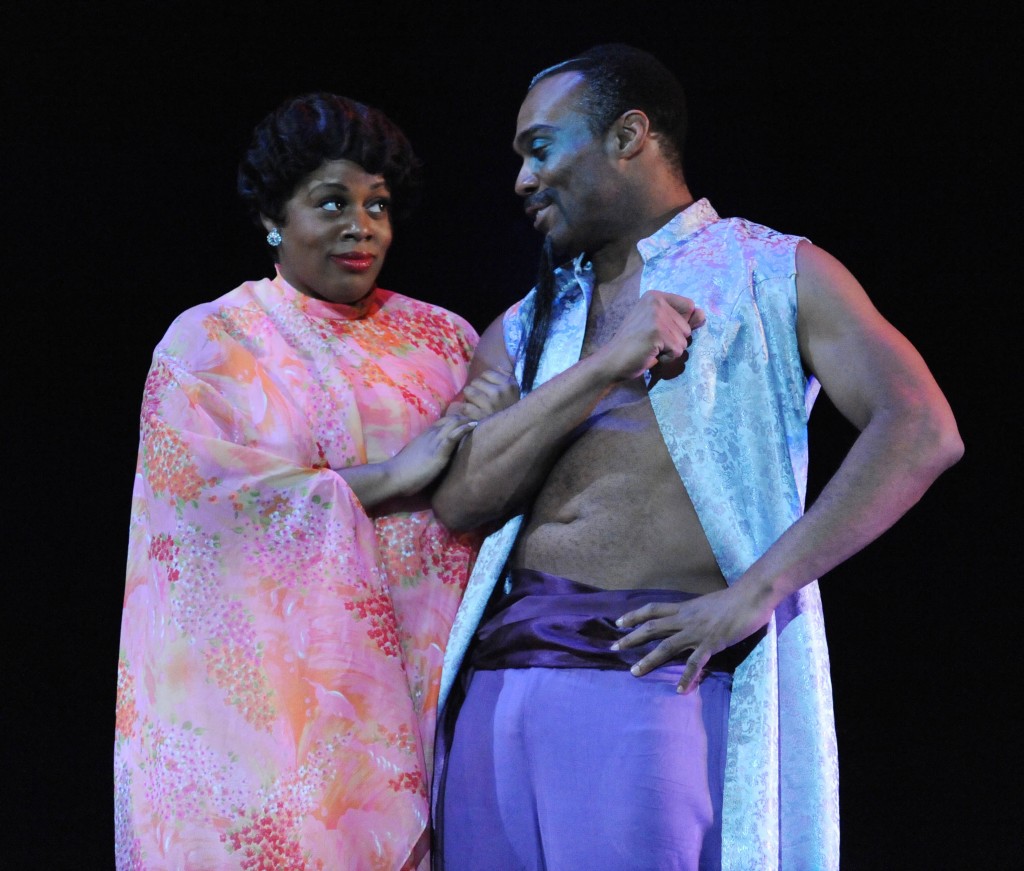