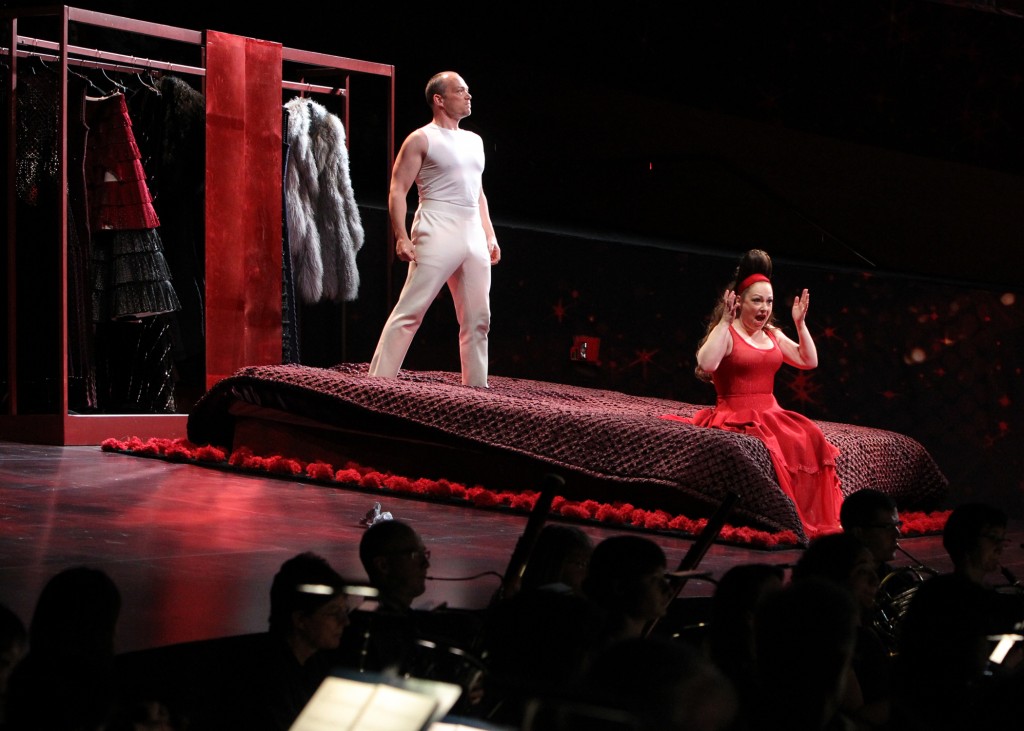 Some comments by David Gregson: May 27

This Figaro was part of my regular Los Angeles Philharmonic subscription series. I attended the performance of Thursday, May 23. My seats are in the Orchestra West section, well placed to see the conductor’s face under ordinary circumstances. The view is of the orchestral players from the side and/or ‘on the bias,’ as it were. The sound is most often highly satisfactory.

Unfortunately, ever since the Philharmonic has found itself more and more in the semi-staged opera business, side views of the proceedings are not terribly satisfactory. This production, directed by Christopher Alden, was especially problematic. The singers were deployed over an enormous area: when they approached my section, I often could not see them as they were too close to the wall underneath; and when they were on the Orchestra East side, they were sometimes obscured by stage props (two huge chairs at one point), or lying on the floor. Reading the titles was a neck-cracking exercise, although for most of Act Two Thursday, the titles struggled annoyingly for life until they finally short-circuited to blank. Under the best of circumstances, however, I find the Disney supertitle solutions to be poor — and in this case, some parts of the audience could not see the titles at all, even when they were functioning properly. Alden should have more sense than to block views (sometime totally!) with enormous bits of scenery.

I am speaking today, not as a critic but as a consumer. I personally pay $222 for my two seats (and more than $2000 for the full series with a donation figured in) and I would like to see and hear the opera. Frankly, if more critics were consumers and not accepting free tickets, they might be as annoyed as I am. I have seen life from both sides now and do not want a cloudy view.

More importantly, how can I judge the voices of singers who are turning their backs on me while wandering off to the most unlikely places? For “Non piu andrai,” Figaro was standing at conductor Dudamel’s back and was face-forward to the Front Orchestra seats. Because the small Mozartian orchestra had been moved way forward towards this section of the hall, he was miles away from Orchestra West. You would think that Mr. Alden would realize that Disney Hall is not configured like a regular proscenium theater and that by having Figaro sing from this position, virtually half the audience cannot see or hear him properly. You would also think he would realize that it makes no dramatic sense to sing this aria to the audience instead of to the character Cherubino who, in this case, was way, way upstage. The aria, really, is about the new life Cherubino will have in the military — but Alden does whatever he wishes whether it makes sense or not.

Take that last line about Alden as a critique of the entire production. It’s instructive, by the way, to see an effort like this one: you suddenly realize how much physical visual comedy Mozart and da Ponte employed. With the titles malfunctioning and the visuals unclear, this comic opera is not very funny. As staging , the whole show was a clumsy misfire.

The singers were superb, by the way — and I liked almost all of Dudamel’s work with the excellent players of the scaled-down LA orchestra, although I thought the energy level flagged in the last 20 minutes or so. My greatest discovery was soprano Dorothea Röschmann (Countess Almaviva), who sang the two big famous arias (‘Porgi amor’ and ‘Dove sono’) with glorious tone and unusually intense emotion. Christopher Maltman (Count Almaviva) plumbed the musical beauties of the role with his full, deeply resonant tone; yet, as a character, he seemed mostly macho, not terribly dimensional.

There is no question that the Figaro, Edwin Crossley-Mercer, is a barihunk who can go shirtless (and did so in Act One), but Alden had him playing the role so petulantly that I found him charmless — despite a wonderful voice. Malin Christensson sounded marvelous as Susanna, but I would like to see her “on stage” under normal circumstances, and that goes for Rachel Frenkel too. Her Cherubino was first-rate vocally.

If you read the list below, you will see some more familiar names — Ann Murray, John del Carlo — and they delivered their expected best. One delightful surprise was William Ferguson who, I can safely say, made you sit up and notice the role of Don Basilio for the very first time! It helped that he was given a long, often omitted aria in Act Four.

In any case, the singing, including that of the chorus, was so very, very good that it deserved a presentation in which everybody involved was not upstaging themselves.

As for the installations of Jean Nouvel and fashions of Azzedine Alaïa — how do they say it these days? Meh. Installations that make no sense or block the view should be given intense second thoughts by the director. And if these fashions were singularly the height of same, I am not certain why. 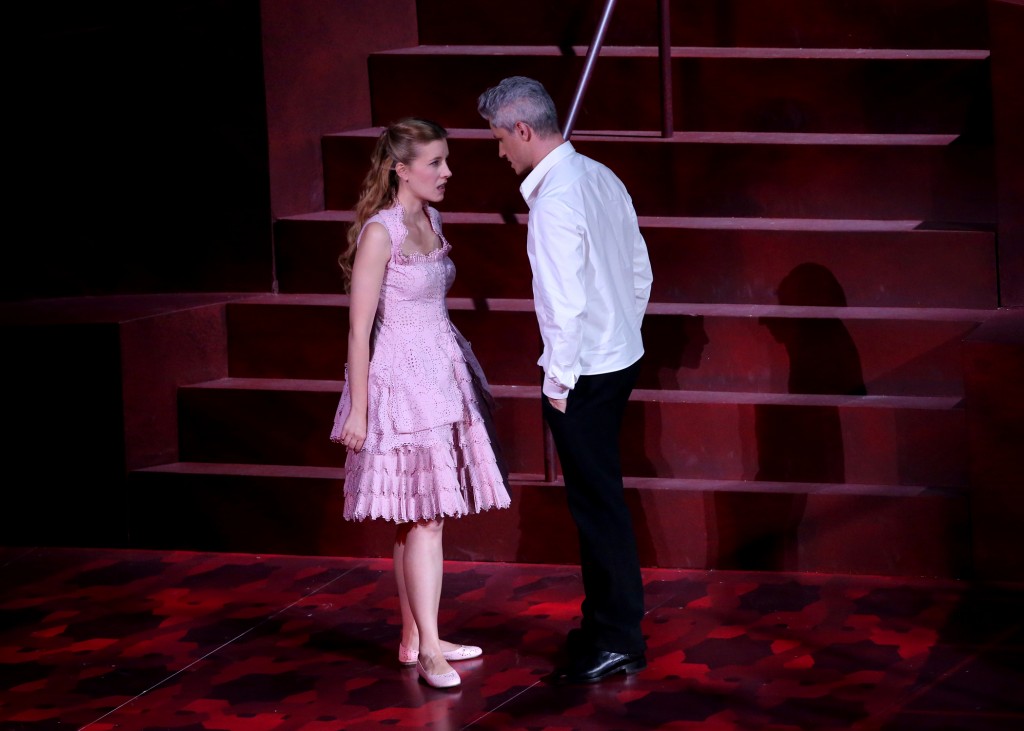 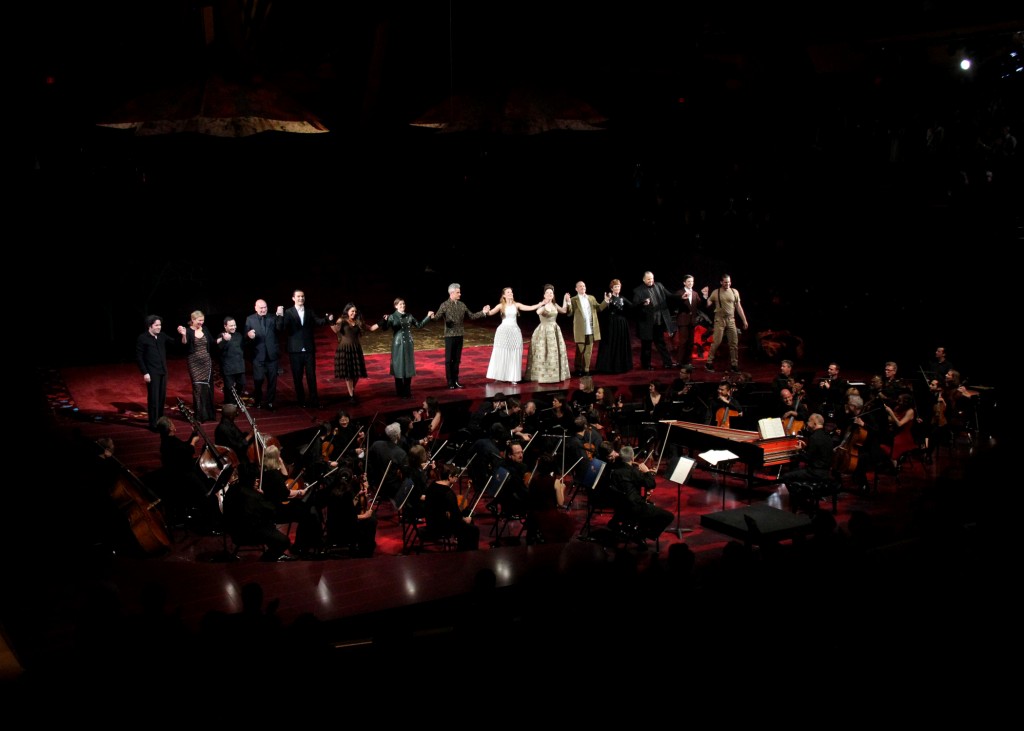