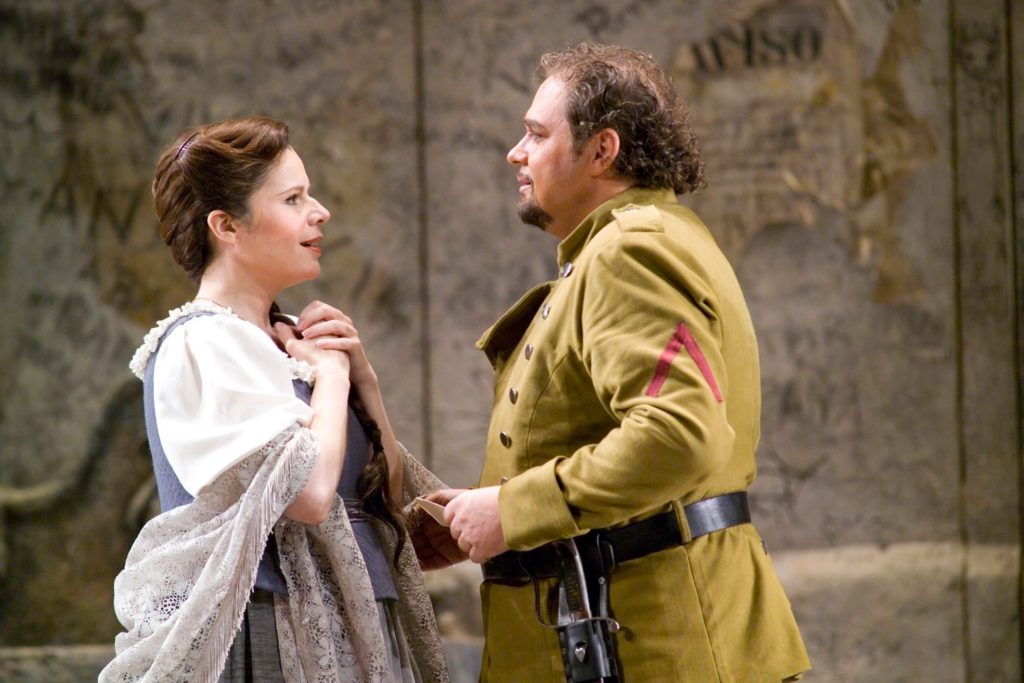 Answer: She has a warm smile and a fetching if somewhat monotonous stage presence. Also, a fine voice, used rather well and mostly accurately.

Question: How did Hadar Halévy do as a last-minute replacement for Marina Domashenko in the title role of Carmen  when the San Francisco’s sixth revival of the 1981 Jean-Pierre Ponnelle production opened in the War Memorial tonight? 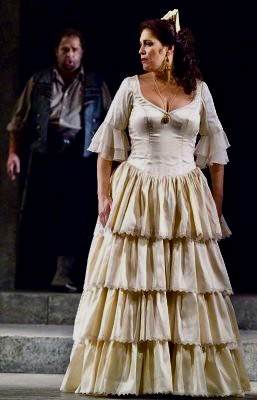 It was not a performance for the ages, but it was good enough, just right for an opening night that reminded the listener of an airliner with sputtering engines, but maintaining altitude, certainly not crashing. Smooth flight or turbulence, opera is the art of gestalt, something that should enfold the audience with its impossible-to-accomplish totality. The alternative, as experienced tonight, is sitting Beckmesser-like, noticing details and problems, imaginary chalk scratching on a virtual blackboard. And yet, again, nothing terrible happened.

Something hilarious did occur, at the very beginning, as the conductor, Sebastian Lang-Lessing, tore into the music with such force and speed that the miniature overture compelled a burst of applause — an acknowledgment of the Opera Orchestra’s athletic prowess. Lang-Lessing proceeded to conduct colorfully and erratically, overpowering the hardworking chorus at times, attempting to convert Bizet to Tchaikovsky now and then, making a big “boom!” on occasion. Consistency is not a hallmark of the maestro of the Tasmanian Symphony.

The circus music of the Overture heralded what was to come on stage. Local veteran Laurie Feldman (now Santoliquido) made sure the clowns were sent in repeatedly, poor Ricardo Herrera’s Zuniga made to prance and goosestep, a cross between Franco and Chaplin, stabbed to death for good measure at the end of Act 2 by Don José. We had entirely too many dramaturgs in the house during the previous regime, but perhaps one or two could have stayed over to inform the director that tweaking the story to have honor-junkie Don José kill a man whose hands are tied behind his back makes little sense. According to those who had worked with Ponnelle, the idea for Zuniga’s murder came from him, in reference to hints in the original novella. For a stage director disregarding many other Ponnelle ideas, it’s unfortunate to stick with one that could have been easily dropped.

This, however, was just one example of a busy director “helping” the story. There was entirely too much shtick and stuff going on, Halévy’s Carmen losing allure to nonstop hip-swinging, etc. Also, an engineering note to the director: the Opera House stage is 134 feet wide. Using almost all of it to separate Don José and Micaela to sing a *duet*, each looking out to the audience, may convey the wrong impression, even if eventually you allow them to get closer. (His kiss on her forehead as she is half-ready to be kissed for real: a nice touch, although not in character for a girl from the country.)

Marco Berti’s genuinely country-bumpkin Don José contributed both dramatic believability and a remarkable voice to the performance. Strong, with a cutting edge and great projection, excellent diction, Berti’s voice is an instrument to admire, making one wish that it had more music in it.

Lang-Lessing’s leaden baton was especially lamentable when imposed on the trio, graced by the best Frasquita (Rhoslyn Jones) and Mercédès (Kendall Gladen) in recent memory. The two Adler Fellows were terrific. Another high point came early, with the children’s chorus singing brilliantly, even while made to overact ridiculously by the stage director. Ana Maria Martinez’s Micaela and Kyle Ketelsen’s Escamillo might have been darned with faint approval.

A huge plus is still the ancient production itself — Ponnelle’s first French opera in this city which became his American home, a spectacular, clever, satisfying set (which somehow disappeared from here, necessitating purchase of a recreation in Zurich). The sudden sunburst on the stage-wide white stucco wall in Act 1, the lowering of the huge gun in the mountains in Act 2 – these are the stuff of operatic experience that doesn’t fade with the decades.

A hot tip: wait for the Nov. 25 or Dec. 2 or 8 performances, when George Cleve makes his SF Opera *debut* on the podium – Bizet and the audience will get a better deal.