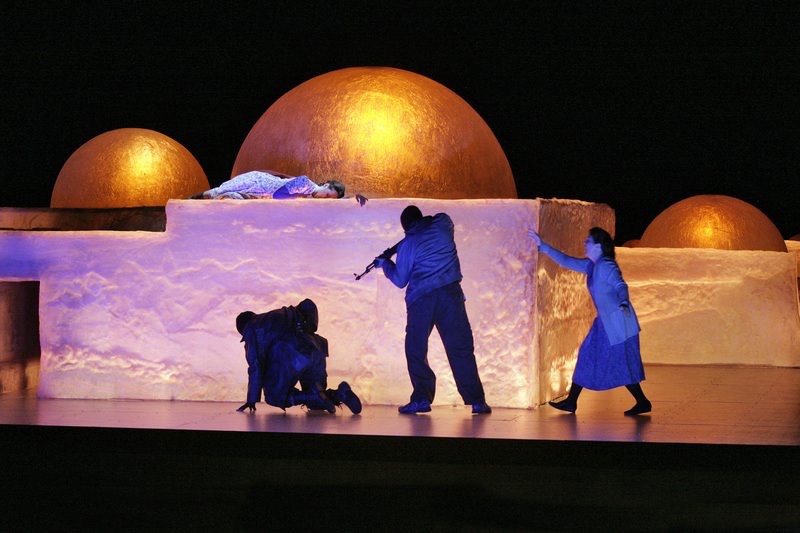 As a dedicated Wagnerian who can sit through all of Parsifal without squirming in my seat, I must confess, such was not always the case. There was a time long ago when the music seemed to me to go on forever without getting anywhere in particular. “Wagner has his longueurs,” I was assured by friends, “his long and tedious passages – but it all pays off in the end.”

It took me years to get over experiencing these painful longueurs – and then one miraculous day, I suddenly surrendered to the music and accepted it totally on its own terms. Now I am rarely bored by any of the “endless” Wagnerian masterpieces. I just go with the flow, so to speak, never struggling against the composer. I let Wagner “take me” – and I suppose this is just the type of musical “rape” that Nietzsche detested and ultimately turned him against his former idol.

Such thoughts rolled through my brain last night as I attempted to sit still during one of Santa Fe Opera’s American premiere performances of Kaija Saariaho’s Adriana Mater – a collaboration of the composer and her librettist, Amin Maalouf, and stage director Peter Sellars. Because a stubborn, cool breeze was wafting through the beautiful semi-open-air theater, I found I had not dressed warmly enough and I was extra-anxious for Saariaho to get her drama over with. Her musical style has been dubbed “spectralism” – and utilizes a dynamic and elaborately textured aural palate that includes offstage voices and an especially broad range of instruments. It is an exciting and highly expressive style, very easy to like – but Saariaho tends to support her dramatic texts with very little (if any) sense of forward driving urgency. When you’d like to go and put on a sweater and have a hot toddy, it’s damned hard to take!

I think Saariaho is asking us to adopt a kind of meditative concentration. Stage events – by which I mean the action – often seem to freeze (a little like some moments in grand kabuki theater) and we are asked to think about them, sometimes for minutes at a time. 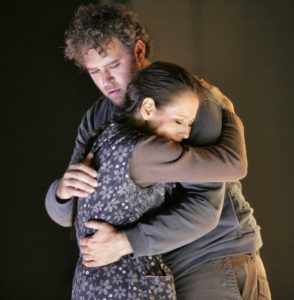 In brief, the story (set in an unspecified but very likely Balkan locale, present or past) deals with a woman, Adriana, who during a time of war is raped by Tsargo, a former drunken acquaintance (now a soldier), and who gives birth to his son. Seventeen years later, this boy, Yonas, finds out who his father is and takes out his anger on everyone, even his aunt Refka. He’d like to kill his father, but loses heart when he finds the old man blind and infirm. This situation is both hell and salvation for the main characters. Sounds a good deal like something Oprah might discuss, interviewing all parties – or the plot of a soup opera. That’s why the material seems a bit thin for what Saariaho attempts — a gigantic musical/poetic canvas with a cosmic theme

At this point it might be worthwhile to quote the current SFO program in which annotator Phillip Huscher describes the piece as a “modern fable with a timeless message….The warfare in Adriana is not between armies, but between people; violence has become inseparable from the culture itself – you go away to war but you bring violence home with you. The story of Adriana and her son is above all an examination of identity, the central theme of all Maalouf’s work.”

So Saariaho and Maalouf tackle big themes – the same themes, by the way, treated so brilliantly by such classical giants of the theater as Aeschylus, Sophocles and Euripides – yet it is Maalouf’s peculiar pretension that he is being both original and profound; however, both as theater and as ritual, the Greek tragedies remain unchallenged! The Greeks used music, drama and meditative choruses to much greater effect. To this Adriana Mater first-timer, the actual dialogue sung by the characters seemed unbelievably banal and redundant. In the sung dialogue, the same ideas are recycled and rehashed to the point of utter tedium. The delivery of the lines was almost invariably leisurely – and while it is common knowledge that sung texts take longer than spoken ones, the Saariaho approach is of the proverbial paint-drying sort.

The scheduled and featured star for this event was mezzo-soprano Monica Groop, but Groop had la grippe, so to speak, and her highly capable understudy, American mezzo-soprano Theodora Hanslowe took over at short notice. She did wonders with a difficult part. The voice sounded fine and firm, and her dramatic performance, despite the inert staging, was convincing. Equally excellent as Adriana’s sister, Refka, was soprano Pia Freund. Bass-baritone Matthew Best was the affecting “villain,” Tsargo, and up-and-coming Canadian tenor Joseph Kaiser was superb as the brooding discontent Yonas, searching for his identity and meaning in life.

Set designer George Tsypin famously provides opera productions of all kinds with an abstract “installation” which may or may not seem to have anything to do with anything. Here he provided a sort of alabastar village with certain Eastern features (such as a prominent dome element) and the thing glowed and turned colors according to the artist’s whim. It was more effective than some of Tsypin’s other work. And Adriana Mater brought out Peter’s Sellars’ most serious side, with the director stressing clarity of action and the ritualism that lies at the heart of theater.

The opera, sung in French, was authoritatively captained by Spanish conductor Ernest Martinez Izquierdo who presided at the Finnish National Opera premiere.

Adriana Mater reunites composer Kaija Saariaho, librettist Amin Maalouf, and director Peter Sellars, whose L’Amour de loin, was such a success here in 2002. Their new work takes place in an unnamed country at war, and its themes—revenge, forgiveness, and redemption—touch the consciousness in profound ways. Synopsis by Kaija Saariaho

SCENE 1: Light
Just before the outbreak of war. Adriana relaxes outside her house. When she tries to go in, a drunken young man called Tsargo bars her way. He attempts to engage Adriana in conversation, reminding her that they danced together a year ago. She rebuffs him, and he departs to fall asleep nearby. Refka, Adriana’s sister, who has watched all this, rebukes Adriana for speaking to Tsargo. Night falls, and a dream sequence is enacted, though we do not know whether the dreamer is Adriana or Tsargo or both of them. In the dream, Tsargo gets ready to take Adriana dancing, but when she puts her hand on his arm he turns into a bottle, which Adriana drops and breaks. Adriana wakes up laughing both in the dream and in reality. Tsargo also awakens, feeling humiliated, and rushes off uttering threats.

SCENE 2: Darkness
The rumble of war comes, as if echoing Tsargo’s fury. He re-enters as a soldier carrying a gun. He knocks at Adriana’s door, but she snubs him as sternly as before. He breaks down the door, and we deduce that he rapes her.

SCENE 3: Two Hearts
Adriana is pregnant. She quarrels with her sister, who reproaches her for deciding to have the child. Refka tells Adriana of the dream she had the previous night, which reflects not only Refka’s own anxieties about the child that is to be born, but also the fears of Adriana herself, who wonders who her son will turn out to resemble—Cain or Abel?

SCENE 4: Confessions
Seventeen years later. Yonas, Adriana’s son, has just learned that, contrary to what Adriana has always told him, his father did not die heroically, trying to defend Adriana and their son. Yonas is furious, and Adriana explains that she had not meant to tell him the truth until he was old enough to deal with it. Yonas is still angry, especially with his unknown father, whom he swears to kill. The scene ends with another dream where the identity of the dreamer is not clear, and in which we see Yonas throwing off all disguise and slaying his whole family, finally turning his weapon against himself.

SCENE 5: Rages
Refka enters to tell Adriana some news, but comes instead upon Yonas, who upbraids her for having lied to him about his father. Adriana enters and Refka tells her, in Yonas’s presence, that Tsargo is back in the country. Yonas charges off vowing to kill him.

SCENE 6: Duel
Yonas meets his father and rebukes him. Tsargo, whose back is to Yonas, doesn’t hesitate to admit who he is and what he has done. Yonas announces that he intends to kill him, but not wanting to attack him from behind, asks him to turn round. Tsargo turns slowly, and we see that he is blind. Yonas is taken aback. Unable to keep his vow and kill his father now that he is disabled, he flees.

SCENE 7: Adriana
All four characters are on stage at once, but independently of one another. All are distraught, consumed with anxiety and remorse. Only Adriana and Yonas eventually meet. Yonas asks his mother to forgive him for failing to avenge her. Adriana questions him calmly about what happened, and tells him how before he was born she wondered night and day whether her son would turn out to be a killer like his father. Now she knows the answer: Yonas is her son, sprung from her blood, and not the son of a monster. “We are not avenged, ” she tells him. “But we are saved.” The gates of Hell can close again. 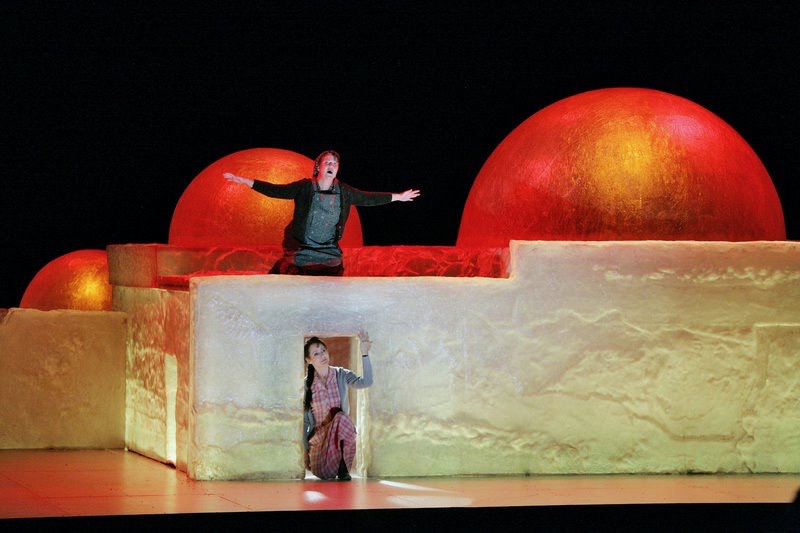 A scene from “Adriana Mater” in US premiere at Santa Fe Opera. Photo by Ken Howard.