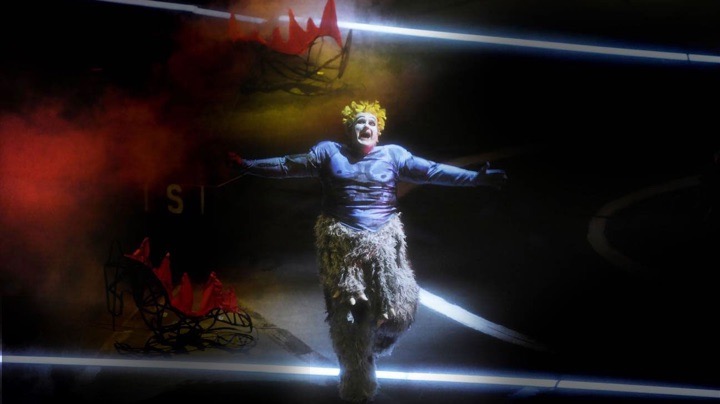 Wagner was an egomaniac. Achim Freyer is an egomaniac. Whether or not the two make a good match will be hotly debated as Los Angeles Opera goes through the throes of creating and bringing to final fruition a $32 million project that will culminate in 2010 with the presentation of three complete cycles of Freyer’s “Der Ring des Nibelungen” (May 29 through June 26) — with words and music by Richard Wagner.

Make no mistake about it. This is Freyer’s “Ring.” Wagner is merely the excuse for Freyer’s astoundingly elaborate symbolic pageant of visual images which must leave the technical crew on the verge of insanity. These unsung heroes, no doubt ready to be committed to a local lunatic asylum, include lighting people, stage managers, prompters, and folks in the wigs, makeup and wardrobe departments.

Freyer’s artistic vision is difficult to describe. Even photos, such as the ones by Monika Rittershaus (mysteriously missing in 2020!) that illustrate this review, cannot capture what Freyer does. His stage pictures are in almost constant motion. Video abstractions pulse on the forward scrim that separates the audience from the performers. Invisible men carry about metaphorical objects (a golden hat, a glowing orb, a hammer, a piece of broken wing, colored neon tubes – and so on) in endless procession. The raked stage, inset with a turntable, is continually shape shifting. Enigmatic markings are everywhere. In most cases, however, the enigmas are fairly easy to decode if you are a “Ring” nut.

Sometimes the characters are doubled or tripled by small or gigantic puppets. Wotan, called the Wanderer in “Siegfried,” is present not only as himself (which also changes color and form) but as a hulking winged presence that manipulates the Woodbird. His missing eye floats over everything, moving gradually from one side of the stage to the other until it crashes to the floor after his confrontation with Siegfried. He is glimpsed in another guise at the end, moving like a cripple into the distance. And other representations of his eye, staff of runes, and floppy hat make appearances.

The costumes, wigs and makeup are all cartoonish exaggerations that transform their wearers into caricatures. Siegfried, for instance, has phosphorescent yellow hair (a parody of the Aryan ideal), a blue body torso plumped out with fake muscles, and a pair of floppy bearskin trousers. Freyer is mocking Siegfried, of course, and his just so terribly profound insight is that Siegfried is, in the long run, really a jerk. Certainly he is a disappointment, even from Wagner’s point of view in the final analysis. But the music seems to paint him as an honest-to-God true hero – which is only one of dozens of ways in which Freyer’s concepts and Wagner’s do not fully mesh.

The technology involved in the creation and operation of the dozens upon dozens of fluorescent or neon tubes is intriguing: of varying lengths, they change color and appear virtually unbreakable, although Freyer creates the redundant illusion of these tubes being split into pieces – a continuing reference to Wotan’s broken staff and shattered power. Whatever their significance, they are ubiquitous. They also symbolize Siegfried’s sword, Nothung.

Freyer also dictates the way in which all the performers move – so Siegfried must always walk with the exaggerated steps and arm swings of a cartoon figure. He also uses no props of any kind, so Wagner’s opera becomes our hero’s enormous air guitar. For the audience, it’s like watching someone play one of those Wii video games – for almost five hours. Siegfried’s arms and hands wave about and things mysteriously happen. Dragons get killed, swords forged and staffs broken.

For traditional Wagner lovers, Freyer’s creation becomes an immense distraction. Most of us are still discovering, though repeated hearings, places in the music where Wagner uses familiar leitmotivs (signature tunes) in ways we had never noticed before. Wagner, after all, is at once the most illustrative of composers. IT’S ALL IN THE MUSIC – the stage directions, the symbolism, the pictorial imagery, not to mention the emotions and even thoughts of the characters. You do not need Freyer or any other stage director to add layers of new ideas on top of all this.

And, in Freyer’s case, however dazzling the stage pictures may be, his bashing us over the head with another level of symbolism is both unnecessary – and even naïve. He does not have a single new intellectual insight to offer. Not on mythology, capitalism, history, racism, religion or anything. He offers absolutely nothing new. Anyone who reflects for five minutes on what he or she has seen will recognize that Freyer’s stagings are like a succession of medieval mansions illustrating a familiar text.

At any rate, there’s never a dull moment in this “Siegfried,” because there is always a major visual distraction to occupy attention spans not tuned in to the music or drama. The lack of freedom of the singers to move about on their inner impulse is frustrating to both the discerning Wagnerite, not to mention to the singers themselves, because it restricts what they can do in every department including acting and singing. Freyer illustrates the drama but he does not present the drama as drama.

In any case, we are all stuck with this “Ring,” whether we like it or not – and quite a few people do like it. The fortunes of the LAO are floating on this production, and I do not want to be the one, however insignificant my opinion may be, to discourage anyone from attending it. Wagner’s art can survive this onslaught to fight another day, and “Ring” productions are virtually a dime a dozen. Traditionalist approaches are dead; we are not likely to see another “literal” production for many years to come. And, one must admit, a traditional “Siegfried” almost always looks ridiculous. The dragon looks fake, the dwarfs don’t look like dwarfs, the hero looks fat and silly (and so does his aunt), and Mime’s anvil never breaks in half on cue. Of course, some productions succeed better in this regard — and one rarely expects the best Wagnerian singers to look their roles.

So – enjoy Freyer’s animated distractions and tune your musical/dramatic brain in on another wavelength. That’s what I did – and even enjoyed myself. Learning to love Wagner involves surrender. So, surrender to Freyer and see what happens. I image some folks will think it’s more like being raped – but others will find it – er, ravishing.

For one thing, LAO has assembled a really excellent cast. Heldentenor John Treleaven is a highly satisfying Siegfried vocally, although on opening night he noticeably ran out of steam where the most steam was needed – the final noisy, ecstatic love duet. His voice started to break repeatedly – which is a shame after he had sung so well and so smoothly all afternoon. He does not possess a spectacular, large sound, but he manages what he has with care and intelligence. Maybe the smog got to him. (It was blowing around LA Saturday making my eyes water.)

In the first act, Treleaven’s voice seemed small in comparison with that of his evil Nibelung adoptive “father and mother,” Mime, sung fabulously by tenor Graham Clark. Clark did not lend Mime the sort of grotesque edge one hears from someone like Gerhard Stolze, the Mime on the famous and trailblazing Solti recording. (It was the first commercial LP set to hit the market.) Though burdened with a huge head mask, he projected his voice with penetrating clarity. He removed this mask from time to time – most memorably in the final scenes in which Siegfried is able to read Mime’s thoughts. Mask on: Mime’s fake thoughts. Mask off: Mime’s real ones. Get it?

The Wotan/Wanderer was extremely fine – Ukrainian bass Vitalji Kowaljow. His voice has a beautiful, polished resonance, and he was able to infuse each utterance with a sense of meaning and emotional truth. Sometime it would be nice to see and hear what he can do when not so closely stage managed.

Emerging from the earth like a huge balloon headed for the annual Albuquerque Balloon Fiesta, was mezzo soprano Jill Grove intoning impressively as the earth goddess, Erda. Yes, she rather floated away stage right later on. Perhaps significantly, Brunnhilde puffed up out of the very same hole in the ground topped by a fright wig that made her look like Louis XIV in drag, and wearing a crazy rip-away dress covered in big black handprints that revealed themselves as bits of the costume were torn off by invisible men. She started out white and ended up red. Thus we see her transformed from goddess to manhandled flesh and blood.

Watson sang forcefully, with well supported tone, but she tended to stray off pitch, particularly in the final moments in which both Treleaven and Watson seemed to be praying to get it all over with.

Poor basso Eric Halfvarson. Getting a gig as the dragon Fafner in “Siegfried” does not usually require coming on stage and getting a long, blue fluorescent light bulb jabbed through you. After singing superbly (as one has become to expect from this artist), Freyer forces him to die on stage in the re-transmogrified form of the giant Fafner and then lie there forever to hear the rest of the act in a heavy red giant suit. One hopes he actually escaped through a trap door.

Remember little Alberich? (Where is Anna Russell when we need her?) This dwarf, the cause of all the trouble to begin with when he steals the gold in Wagner’s curtain-raiser, is spookily incarnated and well sung by bass-baritone Oleg Bryjak. Freyer makes Alberich a sort of frock coated, cigar smoking capitalist. Bernard Shaw might have been pleased. And, rounding off the cast we have the wise Woodbird, trillingly realized by soprano Stacey Tappan. Freyer makes it clear what the little bird tells Siegfried is what Wotan wants him to hear. Ms. Tappan is on stage for her role, by the way, and is not the traditional offstage voice.

Wagner wanted an invisible orchestra, and the one conducted by James Conlon seems to be in top form for this “Siegfried.” Conlon weaves all the material into a wonderfully evolving symphonic whole. Individual moments of high drama are woven into the fabric seamlessly, although one might wish that they stand out more incisively. Those of us raised on the Solti recording seem to like our big moments to be more pronounced and bombastic. And louder. But the covered pit, for all the defensive posturing of those who have created and modified it, still dampens the sound to these ears. Management claims the acoustic properties have passed muster with finer judges than I.

And so one surrenders – as one must do if this LAO “Ring” is to continue. And I sincerely hope it does.