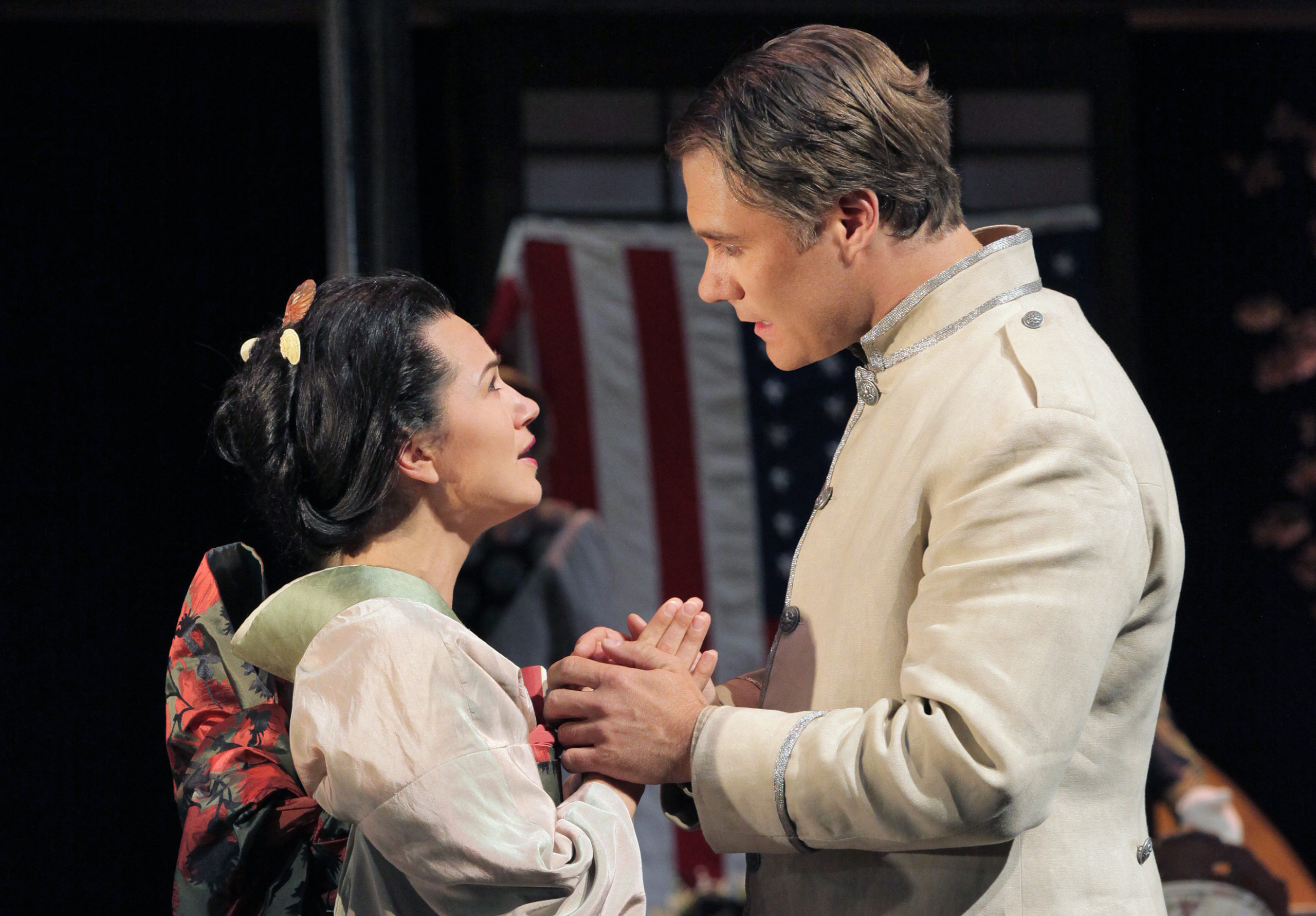 Although it is undeniably a towering masterpiece, Giacomo Puccini’s “Madame Butterfly” is so ubiquitous, so virtually omnipresent in the life of an opera writer that it is not something I normally look forward to. If I had had to choose only four out of the five Santa Fe Opera productions, I would have taken a pass on the “Butterfly.” And by doing so I would have missed the best presentation here this summer. Conducted with astonishing vigor and passion by Antony Walker, brilliantly stage directed by Lee Blakeley, ingeniously designed by Jean-Marc Puissant, and featuring American soprano Kelly Kaduce in the title role, this was an Santa Fe Opera experience to treasure.

In fact, this “Butterfly” was so good, it seems fair to place it in mental competition with the truly great performances of this opera I have seen and heard over a lifetime — although the reader is quite safe! These are far too many to mention in detail; too many to even remember clearly.

First — our Cio-Cio-San, Kelly Kaduce. Here is a wonderful singing actress endowed with an extremely beautiful and very pure voice. She is an excellent musician, a skilled actress, and she easily communicates her emotions. She is a beautiful woman and has all it takes to be a Puccini heroine — but I did wonder what happened to the high C that usually caps Butterfly’s entrance. And in her voice I did not discover that unique timbre that makes some of the greatest sopranos so easily recognizable — Callas, Price, Caballė, Albanese being just a few (a very few!) examples of what I mean. Kaduce, however, produces an evenness of tone throughout her range, something that cannot always be said of the aforementioned ladies.

As directed by Blakeley, by the start of Act Two, Kaduce has transformed herself from an innocent 15-year-old geisha girl into a fairly tough American cookie. She is still naive enough to trust her faithless lover will return, but she looks noticeably harder than before and has adopted American clothing and ways of moving her body. This is not a totally new idea, but it is new enough and Kaduce brings off the change superbly. Hers is also not a sappy, heart-string strumming Butterfly. She is capable of fury and in the final act she upsets what little furniture she has in a rage. This performance is not calculated to tug at your emotions but to touch the essence of tragedy: the grief of betrayal. My cryometer was working overtime, but this production does not aim at being a “weepy.”

Next — our Lt. Benjamin Franklin Pinkerton, Brandon Jovanovich, is also a wonderful singing actor in possession of a strong, masculine tenor voice which he manages with skill. For me, however, this Puccini role, although suited to him perfectly as a physical specimen of attractive manhood, is not an ideal for him vocally. He sings it very well indeed, but I personally prefer a sound with a greater sweetness of tone: think Jussi Björling.

The Suzuki is a truly fabulous mezzo-soprano, Elizabeth DeShong. I want to hear this voice again! A wonderful sound. Suzuki just is not a large enough part for her. She was terrific in her duets with Kaduce. 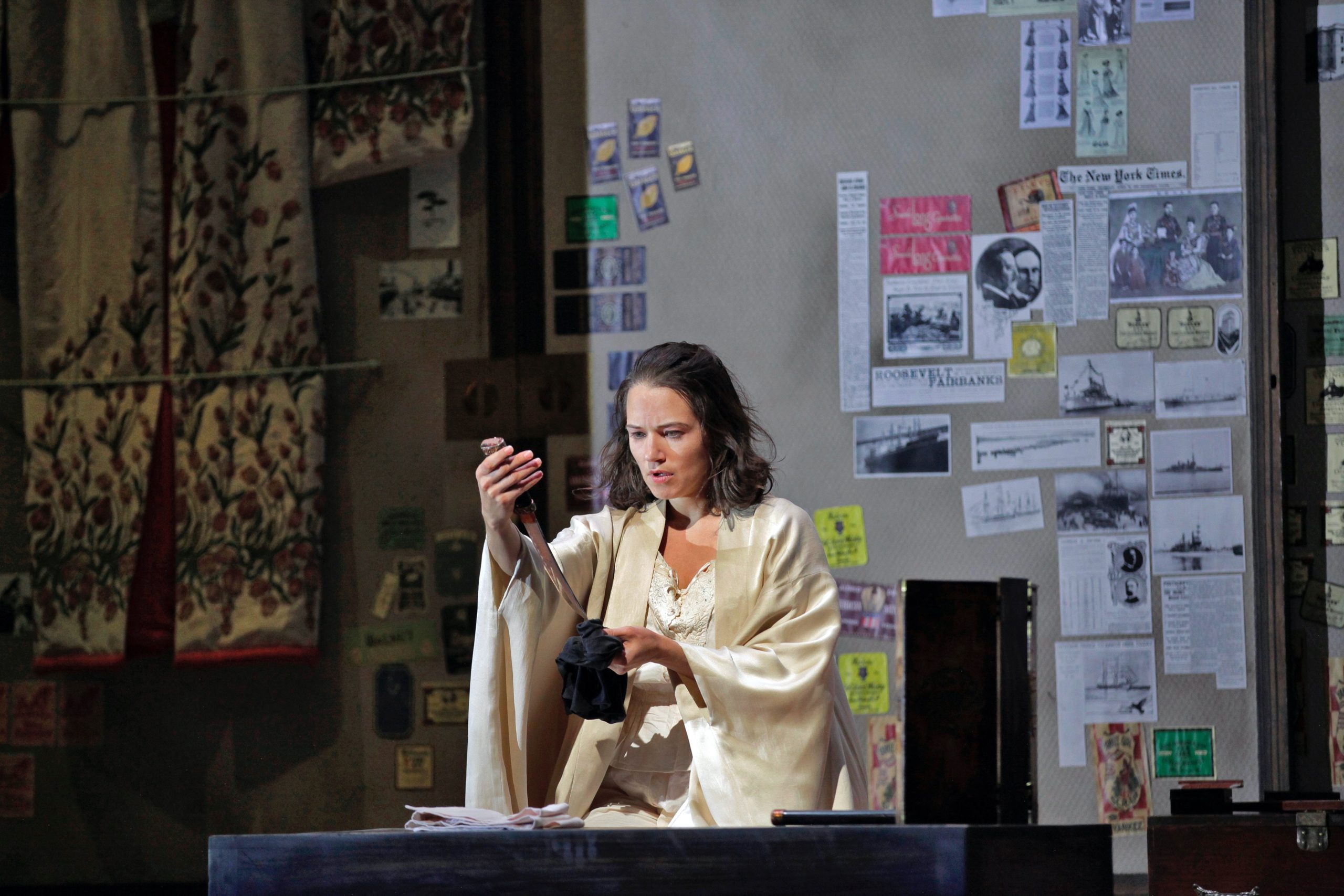 Visually the show is striking in its deft simplicity. Much is done with a house of shoji screens that at first assemble themselves and then rotate to reveal or to obscure different views. Ken Howard’s photos tell the story better than I do. Howard’s shot of little Trouble holding the knife is a striking image — but this literally last-second tableau is difficult to interpret as to what the director had in mind. There are no photos, it seems, of the electrical and/or telegraph poles and wires that appear alongside the cottage in Acts Two and Three. They seem to represent the coming of a colder world. Telegraph wires in the street — but Butterfly is totally out of touch with her absent husband.

So — an unexpectedly wonderful “Butterfly”! Will we be in for a similar surprise next season when the SFO drags out two more warhorses — “Faust” and “La Bohème”? 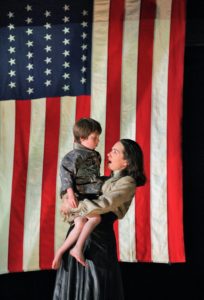