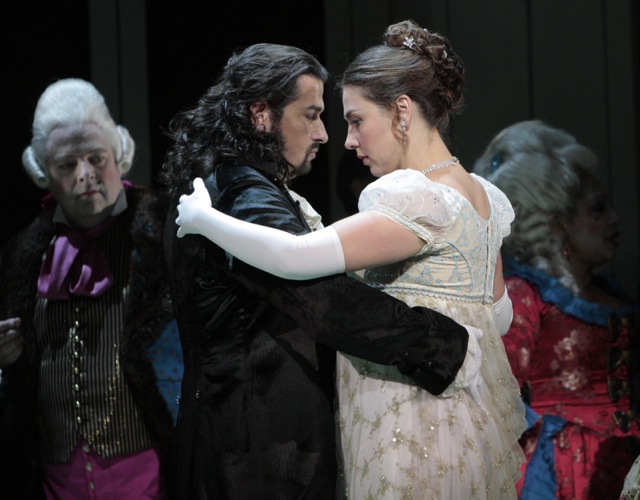 When I was studying for a graduate degree in English Literature at UCSD many years ago, I was friends with a brilliant and culturally well-rounded professor — that is to say he knew and loved all the arts — who, despite an almost comprehensive knowledge of opera, detested Tchaikovsky’s “Eugene Onegin.” Why? Because, he said, it runs so thoroughly against the spirit of Alexander Pushkin’s original verse novella.

Whereas Tchaikovsky’s opera is heavily sentimental, Pushkin’s poem is deeply ironic. It is in fact a work of social satire that criticizes the very sort of sentimental universe in which the opera wallows. Even in an English translation there are innumerable laugh-out-loud moments. The same cannot be said for the Tchaikovsky.

However, unlike my knowledgable professor friend, I have always loved the opera. It contains some of the composer’s most affecting music, and, as a whole, the dramatic relationships between the three principal characters (the dreamy, love besotted Tatiana; the haughty, disdainful dandy Onegin; and the earnest and sensitive poet Lensky) are superbly realized. 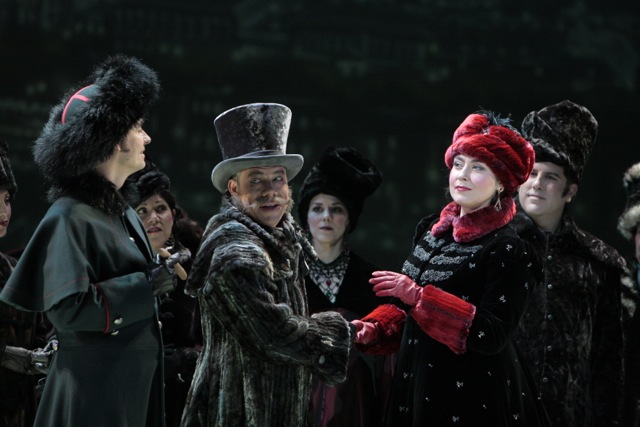 The story is something of a symmetrical palindrome, if you will. At the start, Tatiana desires Onegin but is painfully rejected by him. At the end the roles are reversed: Onegin desires but can no longer hope to possess Tatiana. That’s the crux of the story — although in my mind the most powerful and moving element is the doomed friendship of Onegin and Lensky. Tchaikovsky has written some deeply felt and cleverly conceived music for the two men when they confront one another in a senseless duel with pistols. Lensky dies from his wound in this pointless conflict and the composer makes us feel the terrible destruction of the friendship.

A great director, or even a mildly good one, and two fine male singers capable of acting together can easily highlight this crucial masculine bonding — as in the Los Angeles Opera’s current production of “Così fan Tutte” in which the Guiglielmo (bass-baritone Ildebrando D’Arcangelo) and the Ferrando (tenor Saimir Pirgu) play brilliantly with and against one another. But in the LAO’s season opener, neither the Onegin (Dalibor Jenis) nor the Lensky (Vsevolod Grivnov) do very much to move us vis-á-vis their characters’ failed friendship. And, frankly, elsewhere in the opera I found them no more than competent and largely forgettable. Grivnov sang the famous “Kuda, kuda vï udalilis” nicely, but it did not bring tears to these old eyes, and his sense of the character was vague. Jenis also sang nicely, but that was that. Good voices, no fire.

Truthfully, this entire inaugural production excelled in only one area: the brilliant, propulsive conducting of James Conlon and the wonderful playing of the LA Opera orchestra. When one comes away from “Onegin” saying. “Wasn’t the woman who played the nurse fabulous,” and that’s the best one can come up with — well, that’s a bit of a shame. Kudos, if not kuda kuda, to the Filipievna, Ronnita Nicole Miller, a mezzo I could listen to happily for hours luxuriating in the luscious sound.

I also rather liked (for a change!) the usually boring Monsieur Triquet (tenor Keith Jameson), an example, I fear, of the composer’s padding things out here and there without much thought to its effect on dramatic momentum. In fact, Conlon managed to hide these sewn-in numbers by keeping the score flowing along as if nothing were out of place.

One might possibly regard Prince Gremin’s only aria at the end as a bit of a diversion as well, but it is not only a magnificent classic but it adds something to the story. Basso James Creswell sang it gorgeously.

I save the Tatyana (Oksana Dyka) and Olga (Ekaterina Semenchuk) for last because, while I thought they both had truly beautiful, full voices for their types, neither artist reached the heart of the music. Dyka was also saddled with an drapery-like, high-waisted Empire gown that made her look pregnant. That would have indeed been another story.

Steven Pimlott’s production struck me as muddled and often ugly. There was a concept in there somewhere, but what it was is hard to fathom. I spent a good amount of time puzzling over a transluscent gauze drop painted with a huge seated male nude, his head down and his arms circling his knees. I immediately recognized this image as a quotation of a famous painting, but for the life of me I could not recall the name of the artist and nobody I spoke to at intermission seemed to know what it was or what I was talking about. I felt it might be a key to the production.

It turns out to have been “Jeune Homme Nu Assis au Bord de la Mer” (“Young Male Nude Seated beside the Sea”) by Jean-Hippolyte Flandrin. The original hangs in the Louvre. The circular form of the figure suggests completeness and/or individuation. Many commentators seem to regard the work as homoerotic. If any of this was relevant to the opera as staged, I did not see it. And I have, in fact, seen at least one “Onegin” that was indeed homoerotic in the sense that Onegin cradled and kissed Lensky after shooting him to death.

There is absolutely NO chemistry between Onegin and Lensky in this show as directed by Francesca Gilpin. In general, it is a frustrating and confusing show altogether, with indoor scenes placed outdoors and dancers (choreographed by Ulrika Hallberg) cramped into spaces the size of a city bus. The Russian peasants sing well of course (Grant Gershon is the chorus master), but they initially look silly in bright clean white costumes with red accents and trim. Odd lime colors are on the wooden paneled wings. Two doors meaninglessly flank the proscenium. Real water splashes on stage. (Gosh! Real water Mabel! Can you believe it?).

More drops come down with painterly references. Perhaps Henry Fuseli, he of the nightmare images. There  some good lighting effects and one weird briefly glimpsed dream sequence — but this did not look like “Eugene Onegin” to me. 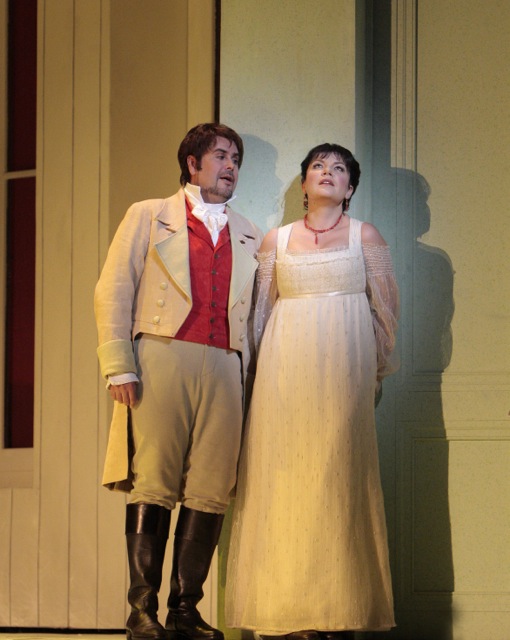