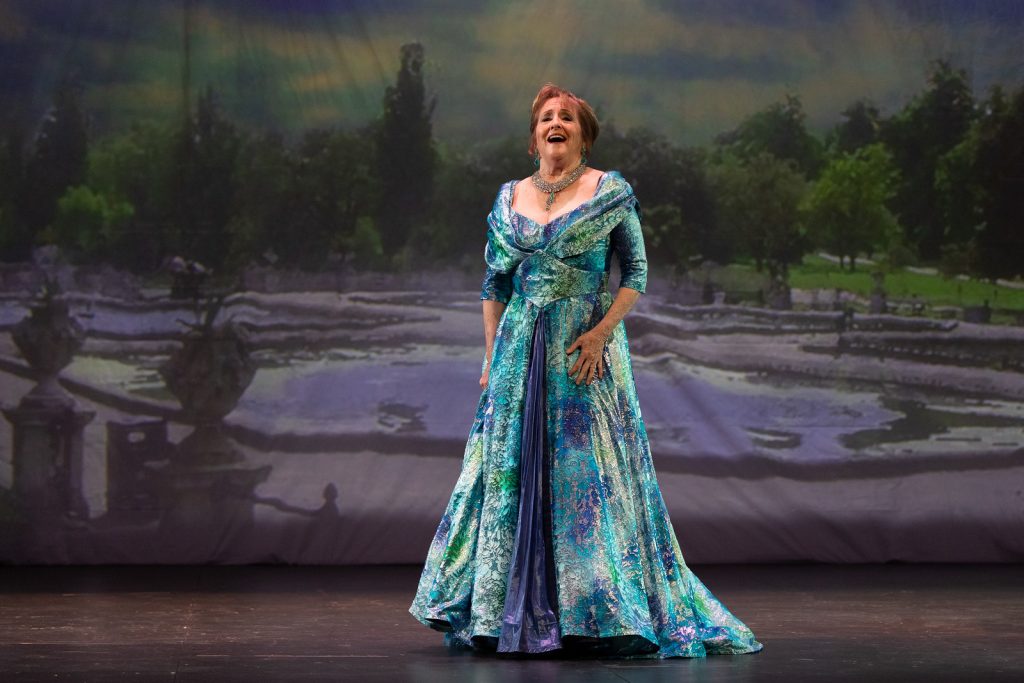 Absence is at the heart of Jake Heggie’s Three Decembers,  a chamber opera currently being presented as part of San Diego Opera’s dētour Series. Charlie and his sister, Bea, live at opposite ends of the country, Bea in Hartford, and Charlie in San Francisco. When we first meet them they are talking on their phones about their mother who is communicating via a corny Christmas letter sent from somewhere in the Caribbean. The siblings’ strained and distanced relationship with their mother, a celebrated stage actress always away on tour, is one the many problems tearing away at the fabric of their relationships.

Both Charlie and Bea are obsessed with the father they barely knew and who died tragically when they were very young. This obsession progressively grows more emotionally destructive over the period of three decades marked by the eponymous three Decembers of the opera. When the mother reveals that the venerated absent father was really a depressed and unemployed alcoholic who committed suicide by jumping in front of a subway train, the kids’ world is knocked off its axis.

Forever absent in the opera from our standpoint is Charlie’s lover Burt who is dying from AIDS. By the time of the second December, he is also only a treasured memory for Charlie. His mother, rather insensitively, had never gotten Burt’s name straight, always calling him Curt. (This is something of an in joke because in real life Jake Heggie is married to a man named Curt, not Burt.) In the opera’s final scene the siblings speak at their mother’s funeral — although she returns as a ghost to make a running commentary.

Three Decembers, with a libretto by Gene Scheer based on an original script by playwright Terrence McNally, was essentially composed for one of America’s great opera stars, mezzo-soprano Federica von Stade, now in her early 70s and apparently not fully retired. For here she is in San Diego singing Heggie’s heroine (or perhaps, anti-heroine) Madeleine Mitchell, the cause of so much fuss. As a character, Maddy is a great stage animal, nominated for a Tony midway through the opera — and as a specter she even stalks the boards commanding the opera’s final “Curtain!”

Maria Callas may be touring as a hologram these days, but it was great to see the flesh-and-blood von Stade showing she still has what it takes. This is an artist whom I have always loved and I have followed almost her entire career. I heard and adored her Cherubino (Le nozze di Figaro) and Octavian (Der Rosenkavalier) in the ’70s — and since then I have heard in countless other roles, live and on recordings. I recall her transcendent Penelope in Los Angeles Opera’s production of Monteverdi’s Il ritorno d’Ulisse in patria in 1997.

Flicka, as von Stade is affectionately known, enjoyed exceptional colleagues for this intimate piece presented in the new 500-seat PHAME! venue on the campus of Patrick Henry High School in San Carlos. A detour indeed — but a wonderful auditorium acoustically speaking. Charlie was the impressive and creamy sounding young baritone, Steven Labrie; and Bea was bright sounding soprano, Kristin Clayton. They did as much as they possibly could to make their characters sympathetic, but I thought both kids (as written) were self-centered brats and didn’t care for either of them.

Though I really enjoyed Three Decembers, as a whole I felt the entire piece was a tad thinly written musically and dramatically, and that all the absences worked against the very thing opera does best: melodramatic confrontation and interaction. It’s more of a memory piece than a full-blooded work of musical theater. As a piece about dysfunctional relationships, it’s miles away from something like A Streetcar Named Desire, either as an opera or a play.

Yet Three Decembers works very well, has definite appeal, and overcomes all its shortcomings through the sincerity and commitment of everybody involved on every level of composition and presentation. Heggie has mastered an attractive fluid style of vocal writing that exudes expertise. The orchestral underpinning is provided by a small assortment of instruments — with Adam Turner conducting 11 members of the San Diego Symphony. The score, while sometimes nostalgic, does not so much express deep emotion as simply propel the story though insistent thematic fragments and rhythms. There are waltzy sections that reminded me of Sondheim’s A Little Night Music. Broadway and art song meet in a strange marriage which Heggie skillfully maintains.

Abounding with duets and trios and conversational exchanges, the work has several highlights that audiences are bound to remember: the aria “Daybreak” sung by Maddy in the second scene; Charlie and Bea’s reminiscences as they walk the Golden Gate Bridge in search of memories of their father; Charlie hearing his mother’s lullaby as he all-alone mourns the death of his lover; and the siblings’ comical number as they parody their mother’s stage persona and her love of shoes. 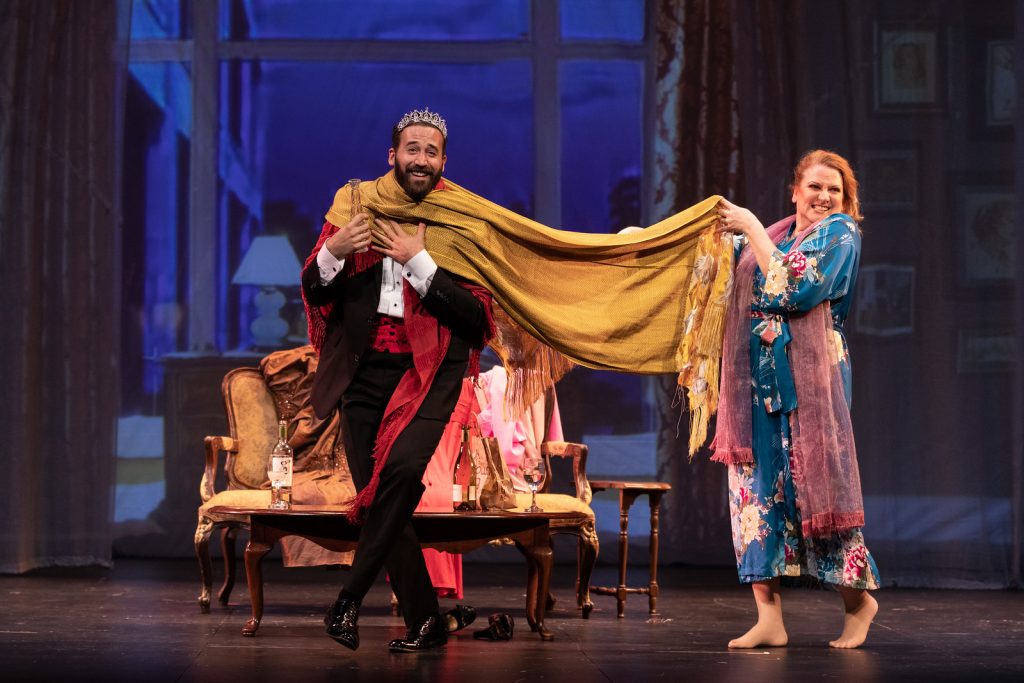 I am not certain Heggie knew exactly how to end this opera. I wasn’t convinced that the kids had truly come around to Maddy’s view that life is grand and it’s worthwhile showing up for it. There’s an uneasy tension between tragedy and comedy at the end when the siblings are conducting funereal proceedings in the presence of their spectral mom. I also thought Heggie might have composed a somewhat grander trio to bring things to a memorable musical conclusion.

Three Decembers takes place in 1986, 1996, and 2006 — dates that might have been helpfully indicated on the largely unnecessary supertitles. The acoustics at PHAME! are so good and the principals’ diction so clear that the titles were not needed. In fact, this would be a terrific venue for future detours — although if you want comfy legroom, I don’t think all sections are equal. And I don’t see wine or cocktails ever making an appearance on a high school campus. Yet, it’s a great facility — plus a super-convenient parking lot in front.

NOTE: Jake Heggie is the composer of numerous successful full-length operas including Dead Man Walking, Moby-Dick, Great Scott, and It’s a Wonderful Life. He was a good friend of one of my very best friends, the late poet and theater critic, Charlene Baldridge, whose verses, along with those of her daughter, Laura Morefield, were set to music in some of Heggie’s songs. I remember Jake fondly from his days in the PR department at San Francisco when I was a visiting critic from San Diego. And I attended the premiere of Dead Man Walking, a memorable success. 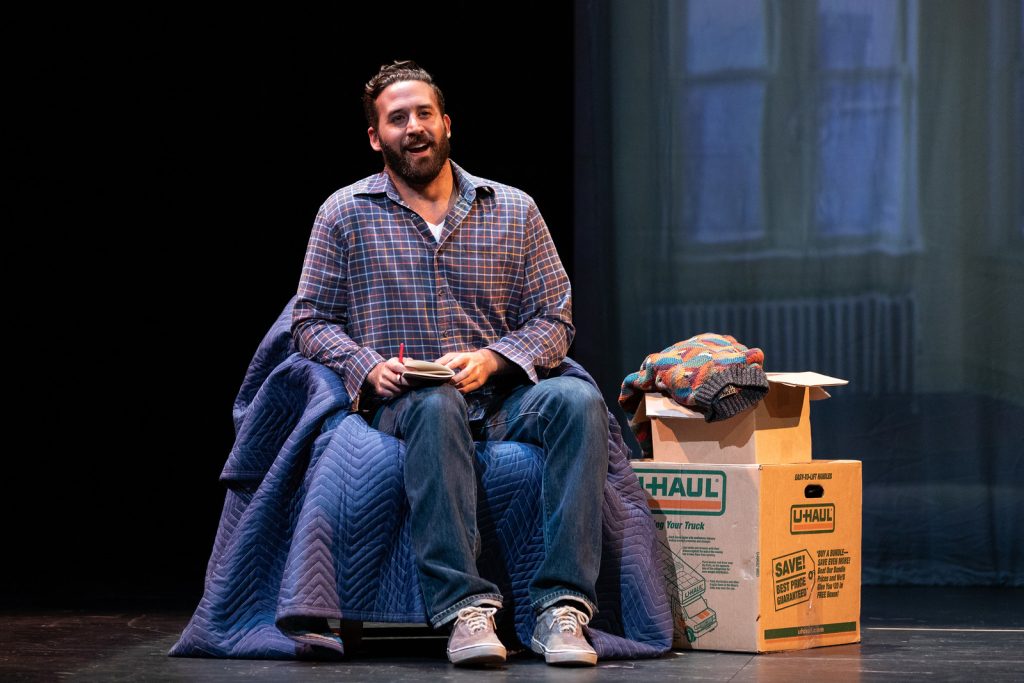