Because Così fan tutte is one of my favorite operas, every time I am required to write about it (and I must have reviewed it literally dozens of times in my lifetime as a professional music critic), I feel compelled to type several introductory paragraphs defending the composer and librettist against the usual charges of unmitigated misogyny.

I usually conclude that the composer’s music transcends both the material and his own “male chauvinism” – and there’s a term I haven’t heard or used in years!

Although I had already seen the opera in live performance several times, I first learned to love it in the mid-1960s when I was living in San Francisco’s Haight-Ashbury district. A record-collecting friend of mine and I shared the entire second floor of a poorly maintained three-story building. It was not long before the famous Summer of Love, and I suppose we helped usher it in by playing a fat black-vinyl set of Così – although the Mozart / da Ponte “School for Lovers” could hardly prepare anyone adequately for the anything-goes romantic notions common in our neighborhood. In any event, I never read the libretto – or when I tried to, it seemed too convoluted and confusing to bother with. All the live performances I had seen had been without Supertitles (since such things had not been invented yet), so I was largely unaware of much of the opera’s political incorrectness.

On the phonograph, the music itself – so varied in mood and texture with its solos and ensembles – enchanted me, my friend and our innumerable visitors, many of whom would actually ask to hear it – and then sit there with blissful looks on their faces. And as I was a hopeless square, my personal Mozartian epiphanies were totally drug free.

Today you can actually download that same Così from iTunes and bliss out with it as you jog around the block. It’s one of EMI’s “Great Recordings of the Century” now, and I can hardly quarrel with that labeling. The cast includes Elisabeth Schwarzkopf, Christa Ludwig, Giuseppe Taddei, Alfredo Kraus, Hanny Steffek and Walter Berry; Karl Böhm conducts the Philharmonia Orchestra & Chorus.

Santa Fe’s “valentine production” of Così, created by scenic designer Allen Moyer and costume designer David C. Woolard (and first seen in Santa Fe in 2003) has, overall, a rather young cast. One perhaps mistakenly thinks of the great Dorabellas and Fiordiligis of the past as mature, even matronly ladies. Schwarzkopf, whom I saw several times as Fiordiligi, always kept a regal bearing that was echoed in her colleagues’ performances: Nell Rankin as Dorabella in San Diego in 1956, and Katerine Hilgenberg in 1960 (San Francisco Opera), and Helen Vanni in 1963 (SFO in Los Angeles). In other words, these two ladies always tried to be ladies – “18th century ladies from Ferrara” as specified by da Ponte – and much of the humor derived from seeing these women try to keep their dignity while succumbing to trickery and their own conflicted feelings.

Similarly, the greatest Guglielmos and Ferrandos (and there were some amazing ones in the productions I just mentioned above) have had their own dignity to maintain. Both are military officers, after all; lowly enlisted guys would not have been engaged to upper class women.

So, the updated and “unrefined” girls and boys of Santa Fe’s valentine present a very different show than what da Ponte and Mozart had in mind. They do quite well at it, although under the stage direction of James Robinson, there is a consistent coarsening of the humor that spirals downward into ever grosser crowd pandering slapstick. The performers are also called upon to do an awful lot of mugging and “indicating” (giving broad physical expression to their reactions).

None of this is appropriate or necessary. Reducing the whole play to mere farce is too easy. Mozart is unsurpassed in conveying the characters’ emotional conflicts in the music – and they range from the sublime to the ridiculous. Although a comedy, the opera teeters on the verge of tragedy, and the ending is always unconvincing and unlikely – just as in most real-life endings, I might add! Sensitive to this, director Robinson has the lovers storm offstage in different directions at the end – one touch that works.

American soprano Susanna Phillips was a Santa Fe apprentice in 2004, but here she is already as Fiordiligi – vivacious, spunky, and capable of singing some notes I haven’t heard before in the role. The difficult “Come scoglio” aria covers two octaves and has some huge leaps – but Phillips either interpolated something over high C, or perhaps she used an alternate version. The show-stopping “Per pieta” also seemed unfamiliar here and there. Phillips is a wonderful talent and should go places. I also liked American mezzo-soprano Katharine Goeldner, a rather good Dorabella, making a strong impression in her “Smanie implacabili” tantrum and elsewhere. 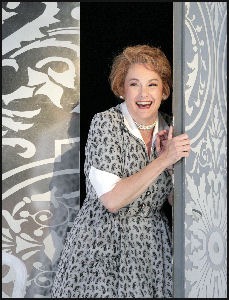 A woman who knows her way around in the world of any opera, mezzo-soprano Susanne Mentzer was somehow cast as Despina, a role you’d think would go to a perky little thing younger than Fiordiligi and Dorabella. Costumed in a crisply frumpy frock, Mentzer is clearly not as wealthy as the girls she serves, but she projects a laser beam of savvy in everything she does and brings the part of Despina a uniquely mature vocal sound.

Of the two lovers, English baritone Mark Stone (Guglielmo) and American tenor Norman Reinhardt (Fernando), Stone was clearly the stronger, although both performed together well. Reinhardt has a beautiful voice, good looks and plenty of stage talent, but he seems to be going through a bad patch at this time. He was clearly intimidated by the exquisite aria “Un’ aura amorosa,” and seemed occasionally hoarse or on the verge of cracking. No such problems afflicted him in Rameau’s Platée, also in Santa Fe’s summer repertory.

American baritone Dale Travis was a particularly delightful Don Alfonso, the cynical manipulator of all the opera’s antics, and self proclaimed master of La scuola degli amanti. He appears, incidentally, at the opening of the opera as a sort of medical examiner, conducting the physicals of a long line of military recruits. None of the directorial comic inventions that follow quite live up to that one.

Moyer’s silver candy box set undergoes one stunning transformation in the show when it fragments dramatically to form the venue for the opera’s garden scene.

Under conductor William Lacey’s direction, the whole opera gelled pleasingly, although the generally fine musicians in the orchestra sounded more and more frayed as the long evening proceeded.